Accessibility links
What Hamburg's Missteps In 1892 Cholera Outbreak Can Teach Us About COVID-19 Response Lesson No. 1: Have "proper precautions in place," says historian Richard Evans. And don't "try to hush it up." Thousands died in Hamburg after the government failed to acknowledge a cholera outbreak. 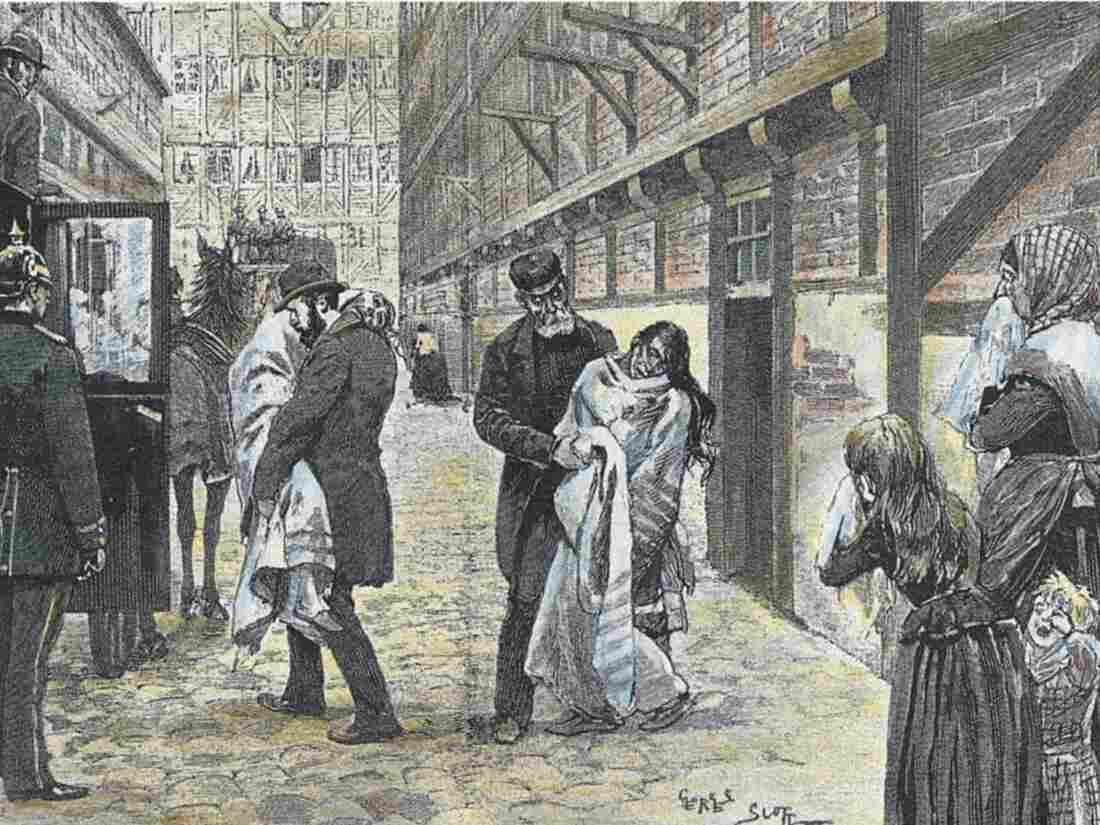 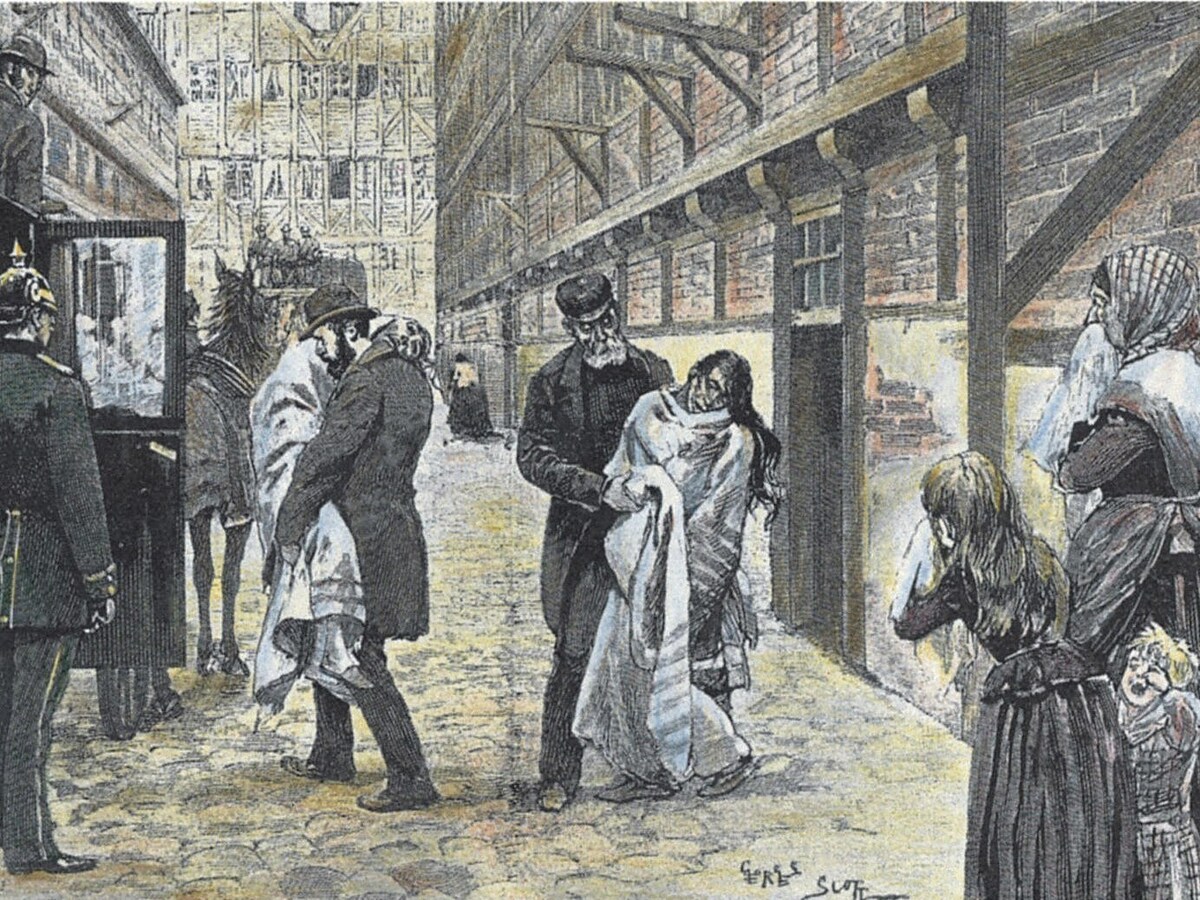 An illustration showing patients being brought to the hospital during Hamburg's 1892 cholera outbreak.

As British scholar Richard Evans researched the history of pandemics for a book more than 30 years ago, he was struck by the uniformity of how governments from different cultures and different historical periods responded.

"Almost every epidemic you can think of, the first reaction of any government is to say, 'No, no, it's not here. We haven't got it,'" he says. "Or 'it's only mild' or 'it's not going to have a big effect.'"

In nearly every case, says Evans, governments that made these assurances turned out to be wrong — sometimes exceptionally so, as he outlined in his 1987 book, Death in Hamburg: Society and Politics in the Cholera Years, about that city's outbreak 130 years ago.

As the world comes to terms with how governments have responded to today's coronavirus pandemic, some are looking to history to guide them. Evans is a knighted historian best known for his trilogy of books about the Third Reich, but his study of late-19th-century Hamburg also serves as a guidebook with lessons for political leaders managing today's COVID-19 crisis.

Chief among those lessons is the need "to have proper precautions in place," Evans says, "proper measures in reserve to roll out when an epidemic hits. And not to try and hush it up or try and deny its existence. Then it has fatal consequences for many, many people."

That's what happened in 1892 Hamburg. With a population of around 800,000, it was the fourth-largest port in the world and a popular jumping-off point for Europeans wanting to start new lives in America. The German city-state was run by merchant families who put trade and economy above residents' welfare.

About a decade earlier, German microbiologist Robert Koch identified the bacteria present in one of the deadly diseases of the day, cholera, which is transmitted via excrement in water. The discovery that cholera was waterborne had spurred several of Europe's largest cities to invest in filtration systems for their municipal water supplies — but not Hamburg. Its leaders refused to spend anything to treat its city water.

Evans says the city's water supply was so rich in biological organisms that a dissertation from the 1880s — titled "The Fauna of the Hamburg Water Supply" — outlined more than 50 kinds of creatures living in it.

Hamburg's leaders claimed cholera was spread by an invisible vapor no government could hope to prevent. But in August 1892, the excrement of a Russian migrant ill with cholera ended up in the Elbe River, which the city drew on for its municipal water.

"And it was delivered to everyone who had a water supply connection," says Evans. "And 10,000 people died, roughly speaking, within about six weeks. It was an absolute catastrophe."

Hamburg's government waited six days after discovering that people were dying from cholera to tell anyone. By then, thousands were ill. The only way out was to invite Koch, then Germany's top scientist, to guide them.

Authorities eventually were able to rein in the cholera outbreak by imposing restrictions on people's movements, disinfecting homes and ordering people to only drink water from a clean water supply built after the outbreak.

"In a situation of an ongoing outbreak, the attention of the public focuses on the scientists providing information," says Christoph Gradmann, a medical historian at the University of Oslo.

Gradmann says the lesson from Hamburg's cholera epidemic is that health institutions need political support and adequate funding before an epidemic hits. "Countries with strong public health systems are able to respond well," he says. "If you have a big public health system that provides good data, that's a very good thing to have."

A year after the cholera outbreak, Hamburg's fed-up citizenry voted their incompetent businessmen leaders out of office. They replaced the merchants with leaders who belonged to the Social Democrats, a working-class party that prioritized science and health over profit.

Evans says the lesson of having proper precautions in place has important ramifications for other global crises besides the current one — especially climate change. "Ninety-nine percent of the world's scientists know that this is because of human activity and carbon emissions," he says. "And governments have done far too little to deal with it. If this epidemic leads to anything, it should lead to greater, firmer action being taken on climate change."

Esme Nicholson contributed to this story in Berlin.