Accessibility links
As States Reopen, Movie Theater Owners Are Watching, And Mostly Waiting Some states are allowing movie theaters to reopen, but will they? Big theater chains say no, so it's up to independent theater owners who are "proceeding with an abundance of caution." 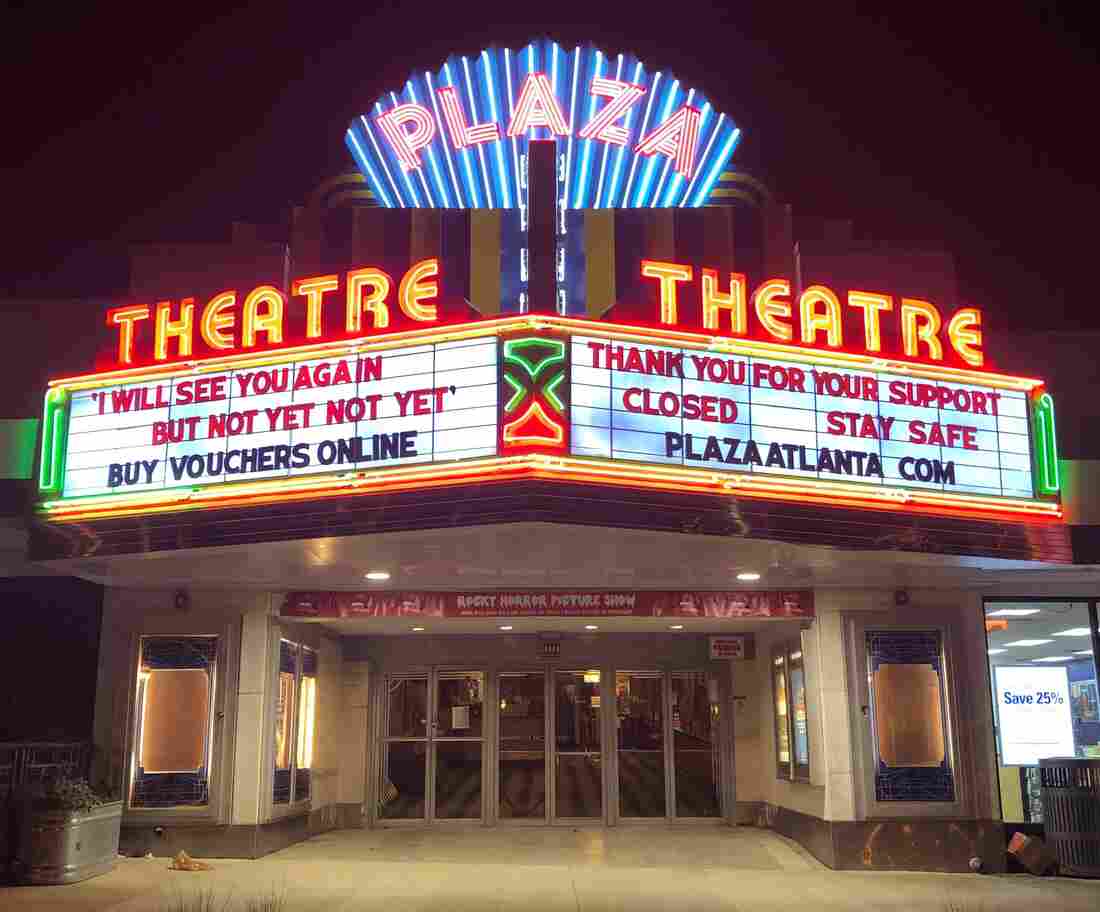 In Georgia, Gov. Brian Kemp has authorized the opening of theaters, but Chris Escobar, owner of the Plaza Theatre in Atlanta, won't be unlocking the doors quite yet. "I'm not forcing my employees to choose between their livelihoods and their lives," he says. CJ Swank/Plaza Theatre hide caption 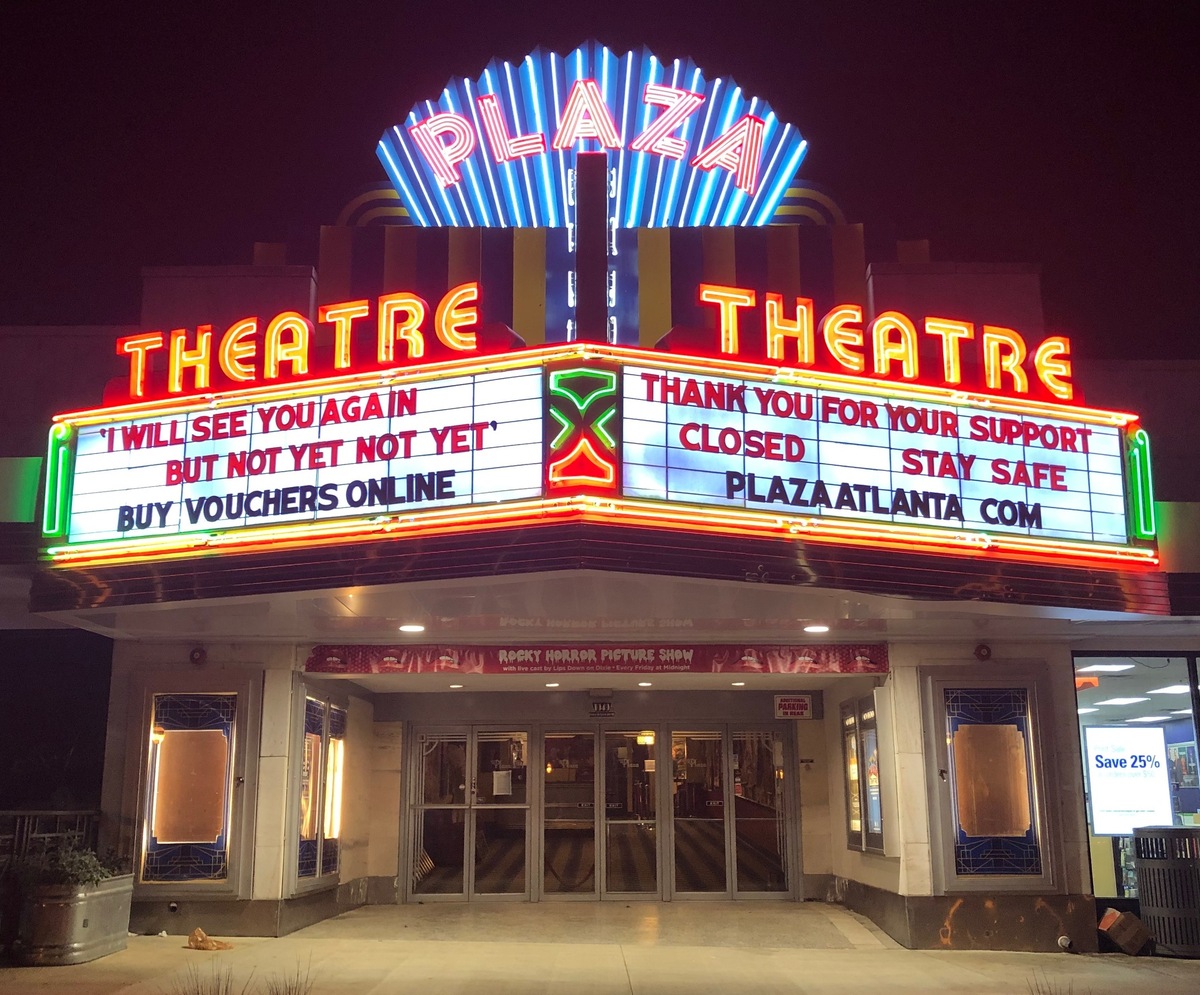 In Georgia, Gov. Brian Kemp has authorized the opening of theaters, but Chris Escobar, owner of the Plaza Theatre in Atlanta, won't be unlocking the doors quite yet. "I'm not forcing my employees to choose between their livelihoods and their lives," he says.

For the first time in more than a month, a handful of U.S. movie theaters is screening films for the public. It's a toe-dip, not a dive. Santikos Entertainment in San Antonio opened three of its nine Texas cineplexes with masks and social distancing protocols in place this past Saturday. Two days later, EVO Entertainment did the same with two of its Texas theaters.

All were playing older releases at discounted prices, and capping admissions at one-quarter of each auditorium's capacity. That is not a way to make a lot of money or even to break even. But it is a tentative step back into the business of exhibition.

About half the movie screens in the U.S. operate under the umbrella of three national theater chains: AMC Theatres, Regal Cinemas, and Cinemark. Not one of them has plans to reopen before June. (AMC and Cinemark each say July is more likely).

Even if they were prepared to open now, Hollywood studios can't release a major movie until it can play in major cities, and most U.S. cities are currently on lockdown. The industry is hoping the premiere of Christopher Nolan's action thriller Tenet will jump-start a belated summer blockbuster season on July 17. So far, Warner Bros. is holding firm on that date, while other studios have delayed the openings of such potential blockbusters as Mulan, Marvel's Black Widow, and the 007 thriller No Time to Die. 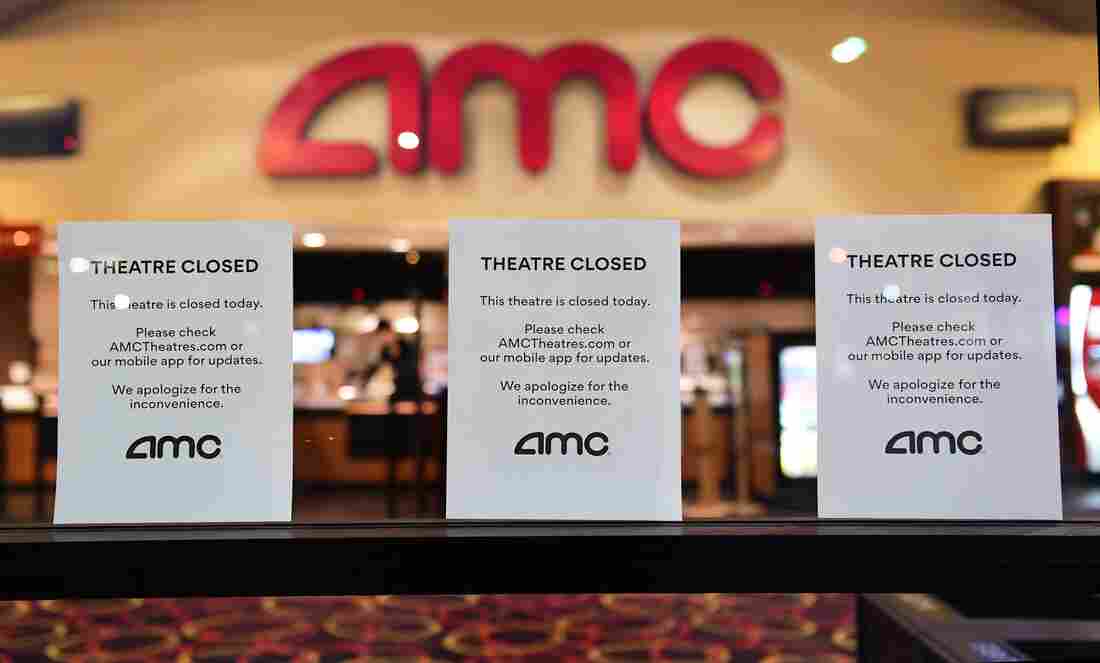 None of the three major national theater chains — AMC Theatres, Regal Cinemas and Cinemark — have plans to reopen before June. Above, signs are posted in front of the AMC in Montebello, Calif., on March 17, 2020. Frederic J. Brown/AFP via Getty Images hide caption

In the meantime, if cinemas are to bounce back as governors open up individual states, it's up to local chains and independent theaters to start the ball rolling.

In Georgia, Gov. Brian Kemp authorized the opening of theaters almost two weeks ago, telling news outlets, "I know people are chomping at the bit to get back to work. People are experiencing financial ruin right now. I think people are getting very frustrated at having to stay at home."

So I ask Chris Escobar, who owns the Plaza Theatre in Atlanta, what time his show starts tonight. "We aren't going to have a show tonight" he chuckles, noting that the governor is not forcing anyone to reopen. "But at the same time," he continues, "I'm not forcing my employees to choose between their livelihoods and their lives."

Chris Collier, executive director of Renew Theaters, is thinking along similar lines. His organization manages four art-house cinemas in the currently locked-down states of Pennsylvania and New Jersey. When those states allow him to reopen, he's unlikely to leap back in.

"We don't want to be guinea pigs," he says. "We are imagining what that could look like, with spaces between people, shields at the concession stand. But honestly, it's gonna be a long way off."

With the cost of staff and cooling over the summer, it might actually be more cost-effective to stay closed until we can reopen properly.

"Reopening might actually require a substantial amount of investment on the part of theaters," says Alison Kozberg, managing director of Art House Convergence, a non-profit that works with about 200 independent theaters nationwide. "It would require buying new equipment and new hygiene products to keep the theater clean and safe in accordance with guidelines to mitigate the spread of COVID. For some theaters the expense is going to be viable, but for others it's going to be quite overwhelming."

Especially, says Collier, at just one-quarter of capacity. "At that point, with the cost of staff and cooling over the summer, it might actually be more cost-effective to stay closed until we can reopen properly," he says.

To keep income going until then, he and a lot of theater operators are trying something called "Virtual Cinema," in which their patrons can screen a new film at home and the theater gets a share of the proceeds. While this initially seemed promising, Collier offers a caveat: "The number of ticket sales is more in the tens, than in the hundreds and thousands we'd see in theaters."

So what else? When Escobar thought Atlanta's Plaza Theatre would be closed for a couple of weeks, he figured they'd do the equivalent of cleaning out the garage — paint the floors, and organize concessions to make use of a rare break from shows playing seven days a week.

But as weeks stretched to months and his costs mounted, he got bigger ideas: A "100% contact-free" pop-up drive-in behind the theater, say, with tickets scanned through auto windows, and sound broadcast over what he told me with an almost audible wink was, "one of the coolest ways to listen to anything: radio." 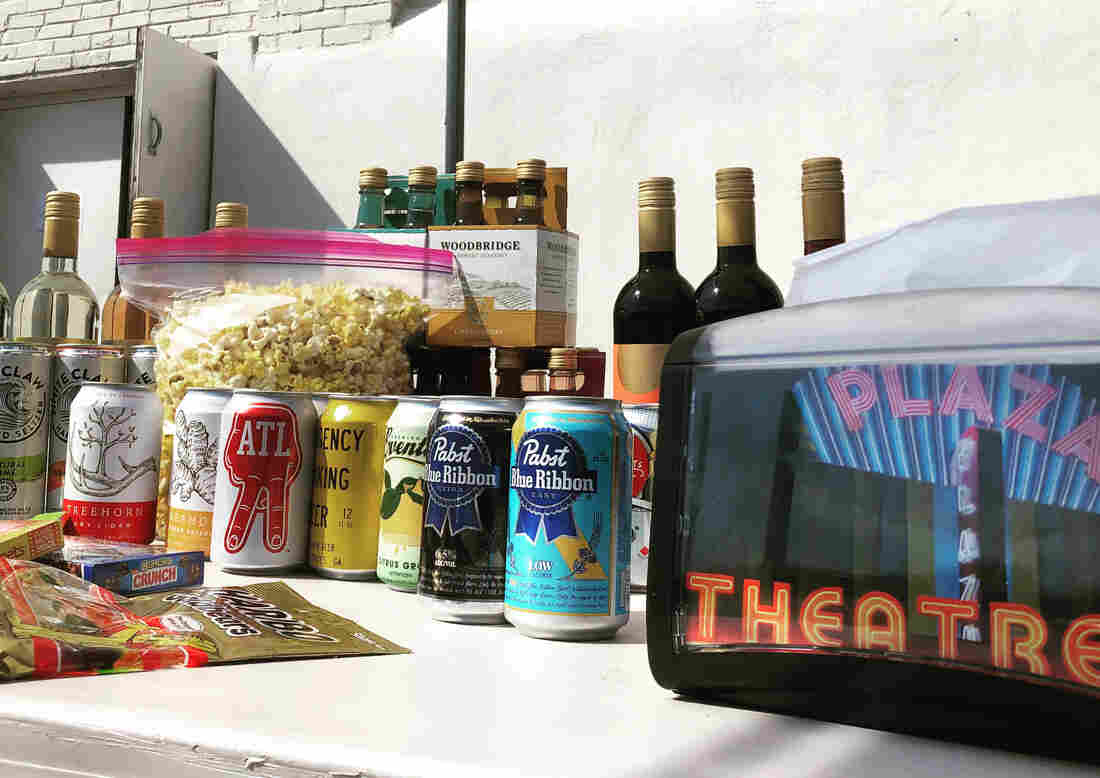 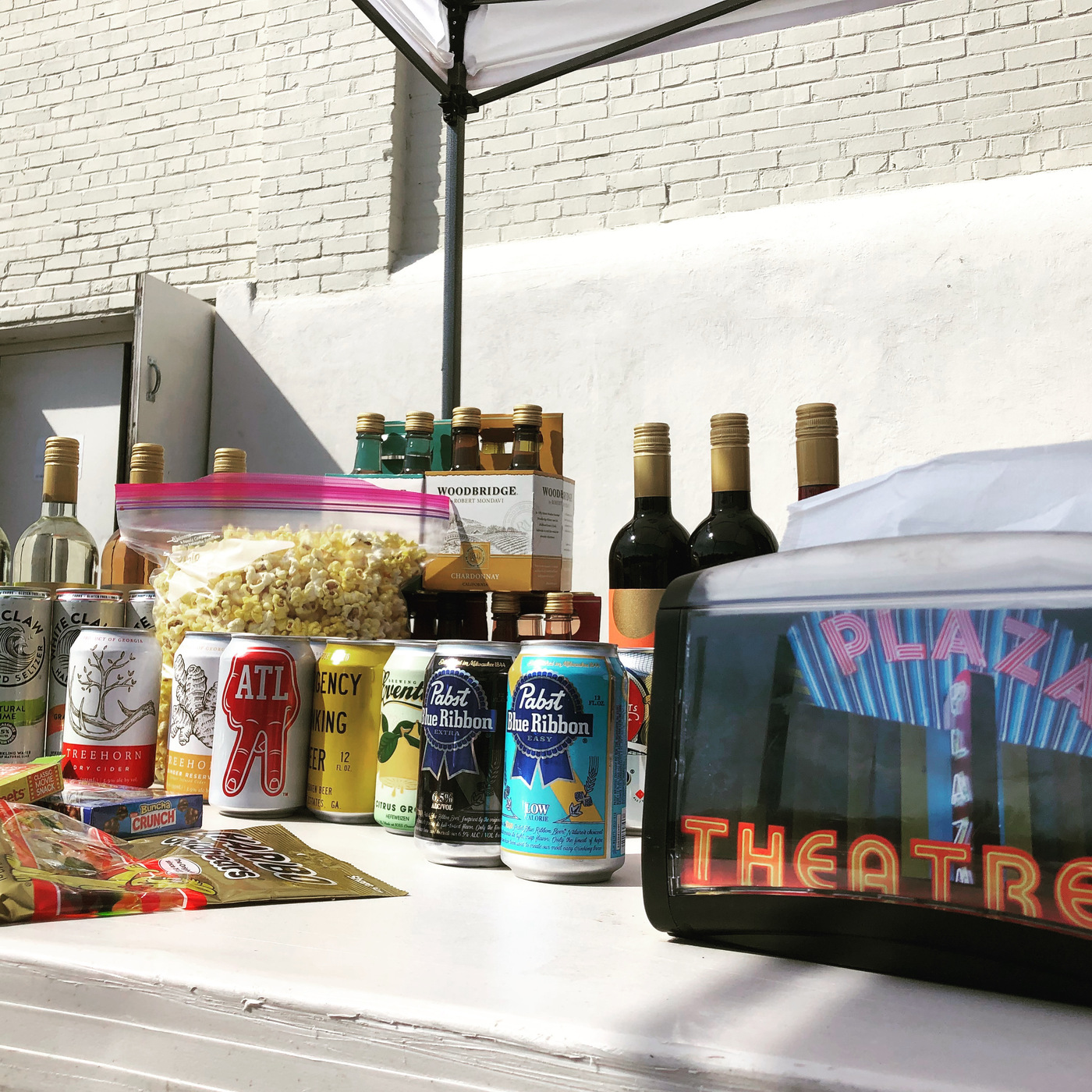 He also wanted to give something back to essential workers during the pandemic. His sister and his mom both work in grocery stores. "I understand first-hand the new level of risk that none of these folks had ever signed up for," he says.

So he created Movie-Night Care Packages for them — good for free tickets and refreshments when the theater starts up again. And before that, on a more limited basis, he's planning private screenings for first responders.

"One family at a time," he explains. "They get to watch their favorite movie, they have the entire 485-seat movie theater to themselves, we'll give them the full treatment of concessions and popcorn in the way that we occasionally have celebrities who rent the theater and do a private screening. We're gonna treat them like the VIP's that they are."

Escobar is hardly alone, says Kozberg, in getting creative about reaching out to audiences. She cites three theaters by way of example: "The Music Box in Chicago has a kind of tip-line where people can call in and describe what streaming services they have and their programmers will recommend what to watch. It's been wildly popular and it's so funny," she says. "The Brattle in Cambridge, Mass., had a movie trivia night to support them, which became an opportunity for people from all over the country to join each other. Cinema Arts Centre in Huntington, N.Y., has been working with their audience to care for them. Calling them on the phone just to make sure they're doing all right."

These aren't organizations where audiences are hypothetical or part of a business arrangement. Independent art-house theaters are small organizations. Many of them describe themselves as a family.

That's different, she notes, from the sorts of things big theater chains are likely to do with their patrons.

"These aren't organizations where audiences are hypothetical or part of a business arrangement," says Kozberg. "Independent art-house theaters are small organizations. Many of them describe themselves as a family. They're going to know if their patrons are older, if they're vulnerable, what their needs are, and they're going to be really thoughtful about decisions around reopening. The same is true of their relationships with their staffs. So they're proceeding with an abundance of caution."

They're also finding ways to maintain a relationship with audiences they hope to welcome back soon. The Dietrich Theater in Tunkhannock, Pa., is sponsoring a "make your own film" contest for kids 16 and younger, with a cash prize and entrants shown before the feature attraction when the theater is operating again.

Renew Theaters' Chris Collier is thinking even younger. When he recorded the Ambler Theater's "Staff Picks" for streaming, he enlisted his toddler Zachary to help.

"The biggest draw for him at the theaters is the popcorn," says Collier. "But he really does like the experience. At home he does run around the house and loses attention in what's on the TV screen. But at the theater, he sits in the dark and is enwrapped with what's on screen."

That is the magic of cinema. And Zachary, you might argue, is the future of theaters.

He's also the reason Collier is pretty sure theaters will have a future.