Accessibility links
Biden's Vice Presidential Choice May Be Swayed By History, Including His Own Joe Biden pledged to pick a woman as his running mate. Beyond gender, there are many calculations involved in the Democratic candidate's decision, including his perspective as a former vice president. 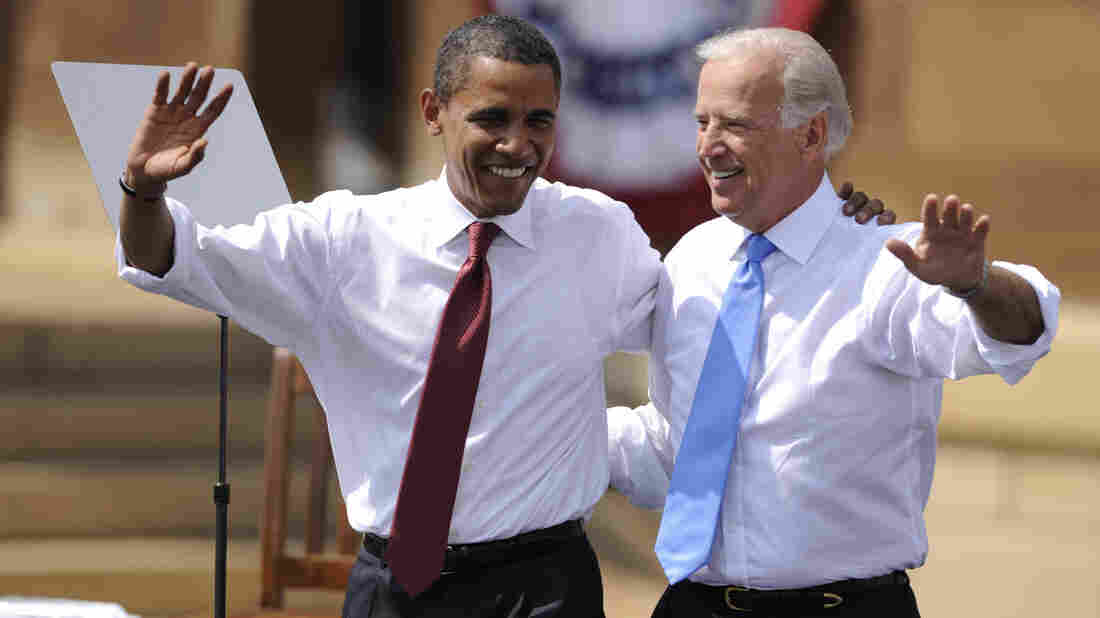 Presumptive Democratic presidential nominee Joe Biden, seen being introduced as Barack Obama's running mate in 2008, has the unique perspective of choosing a vice presidential candidate having served in the job himself. Emmanuel Dunand /AFP via Getty Images hide caption 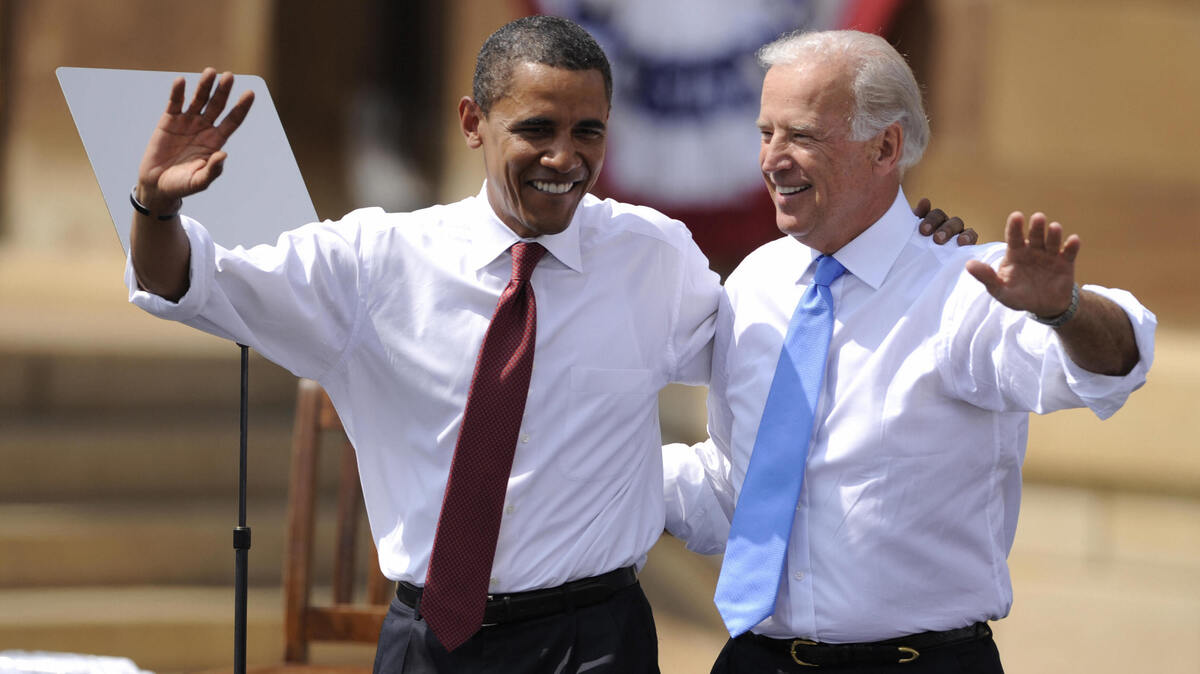 Presumptive Democratic presidential nominee Joe Biden, seen being introduced as Barack Obama's running mate in 2008, has the unique perspective of choosing a vice presidential candidate having served in the job himself.

At a town hall in New Hampshire this past February, long before Joe Biden was the presumptive Democratic presidential nominee, he outlined two basic criteria for his potential running mate:

"One, that they are younger than I am," the 77-year-old candidate told the crowd. "No, I'm not being facetious, and No. 2, that they are ready on Day 1 to be president of the United States of America."

But beyond gender and age, there are plenty of other calculations for Biden to consider that are harder to define, and his choice may be different for two key reasons.

First, Biden has held the job himself, offering him a perspective on the governing side that most other candidates don't have.

"You have to be intellectually simpatico. You have to be on the same wavelength," Biden said on CBS's The Late Late Show with James Corden last month. "Now, Barack [Obama] and I never disagreed on strategy; we sometimes disagreed on tactic."

Second, because of his advanced age, some Democrats think it's plausible Biden could choose to serve one term, if elected. So on the political front, his potential vice president might end up as the party's natural standard bearer in a few years.

The most important factor is selecting a person who is qualified to assume the presidency if need be, researchers and political consultants agree. But there are a multitude of other criteria they mention, from choosing someone who could compensate for a weakness of the presidential candidate, to selecting a running mate who is thought to offer an electoral benefit.

Last week, Biden formally began the process of looking for a running mate by announcing the names of former and current Democratic officials who are leading his search for a vice presidential candidate. The committee plans to vet more than a dozen women, according to Biden, and complete the vetting process by July.

It's common practice to announce a vice presidential pick in the week leading up to the nominating convention. The Democratic National Convention has been postponed from mid July to the week of Aug. 17 because of the coronavirus pandemic, giving Biden even more time to make his pick public.

Biden has said he's looking for someone who has strengths that he doesn't have, which is a fairly common practice. Barack Obama did not have the legislative or foreign policy experience that Biden did when he chose him in 2008.

In 2012, the Republican presidential nominee and current Utah Sen. Mitt Romney had no experience on Capitol Hill and picked then-Wisconsin Rep. Paul Ryan, who was chairman of the House Budget Committee and considered a rising GOP star in Congress. 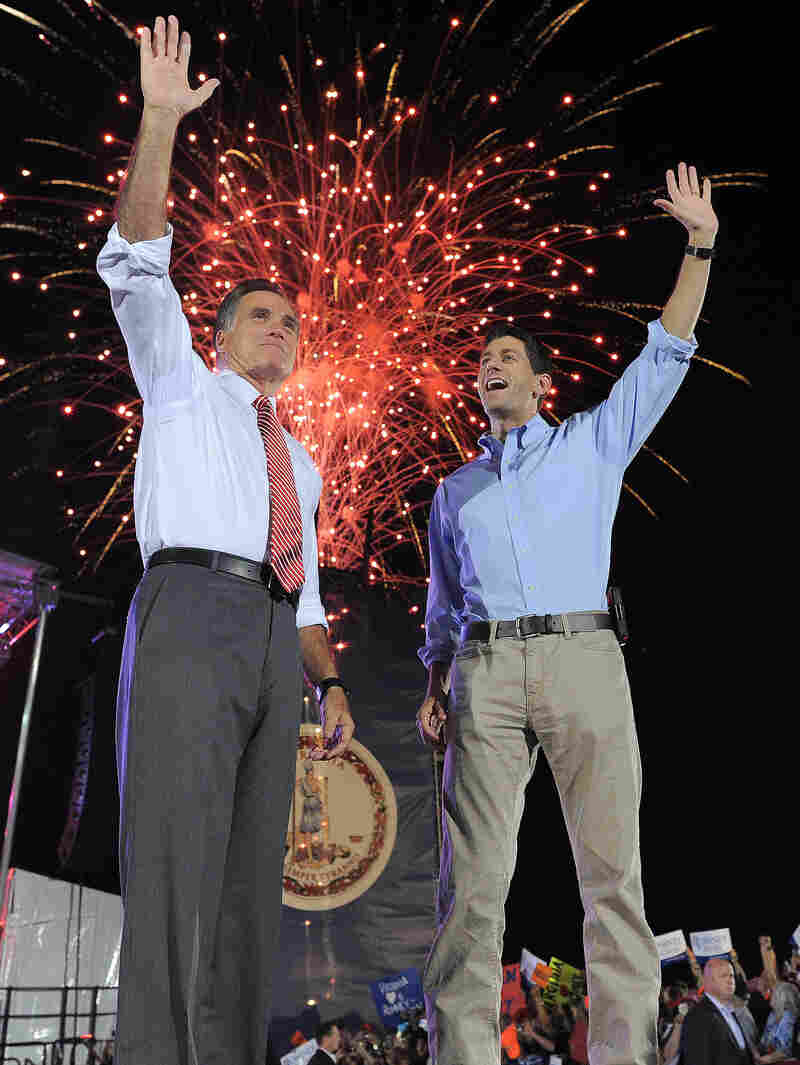 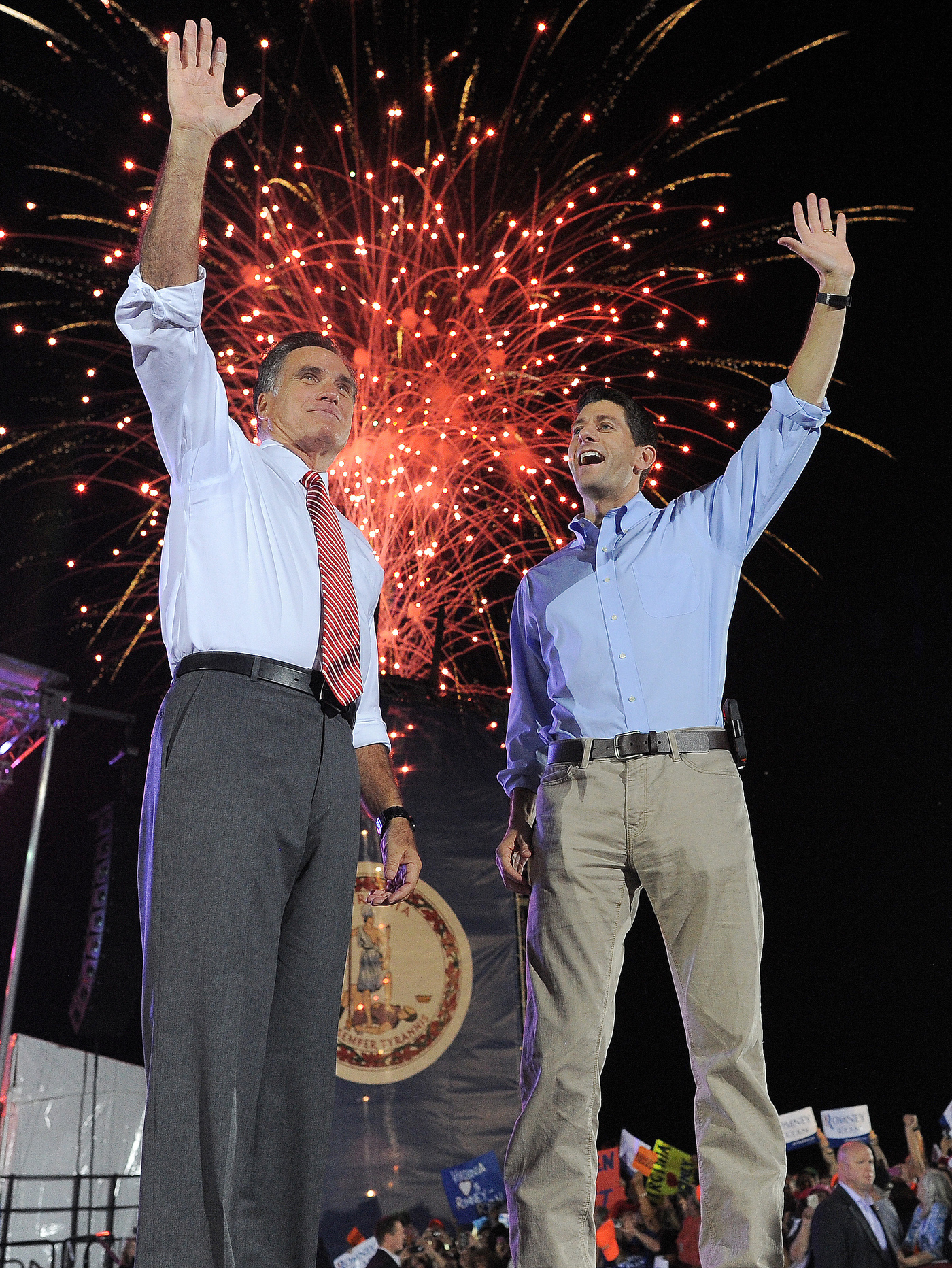 Republican presidential nominee Mitt Romney and his running mate Paul Ryan at a campaign rally on Oct. 4, 2012, in Fishersville, Va.

The 2008 Republican presidential nominee, the late Arizona Sen. John McCain, similarly tried to find a running mate who could offset his age and long career in Washington. His campaign considered their decision not just a strategic choice, but a competitive calculation because McCain was running against Obama.

"We were facing an opponent who embodied, personified, change really and we needed to make a convincing argument for a change," said Mark Salter, a longtime top aide for McCain.

So the McCain campaign chose Sarah Palin, then serving as the youngest governor in Alaska's history.

"Many people have obviously argued that choice was a mistake," said Salter. "I won't get into whether it was or whether it wasn't." 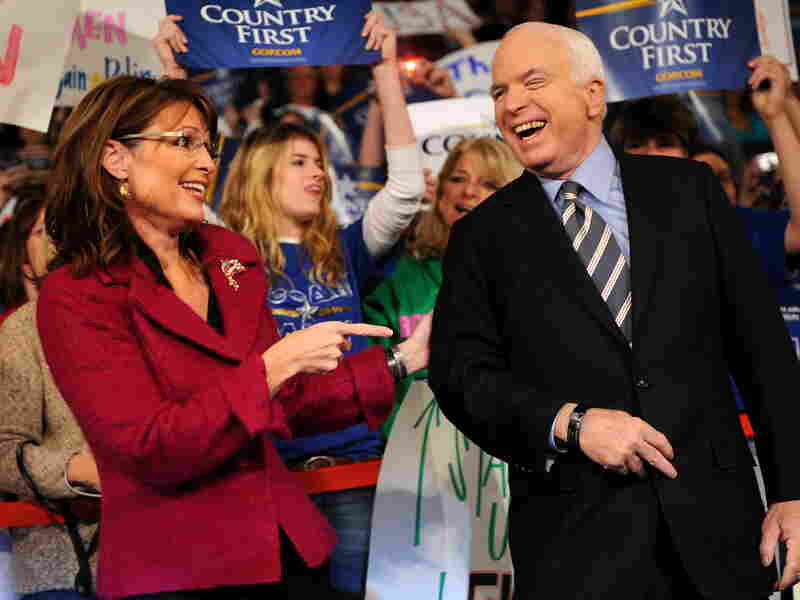 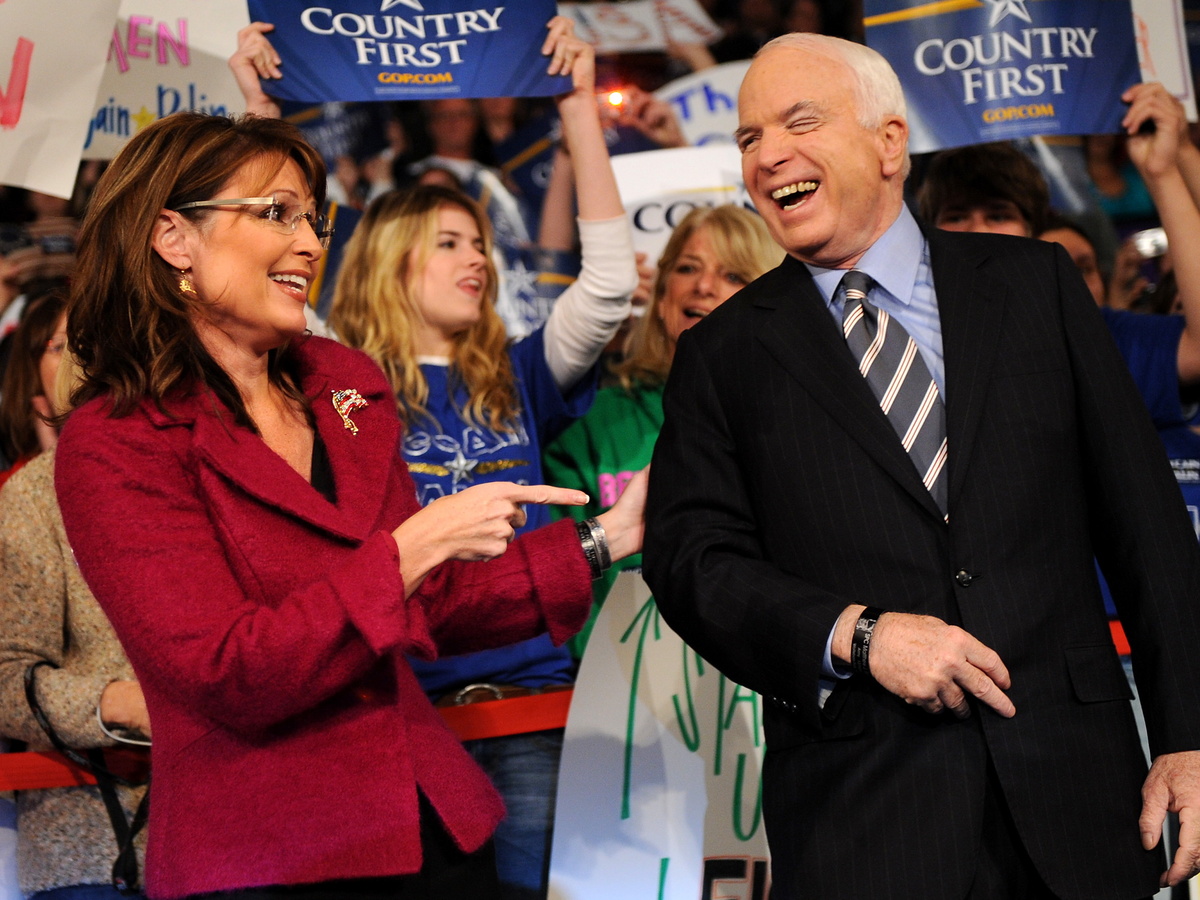 Palin has become, for many, the textbook example of what a presidential candidate should avoid when choosing a running mate. The conventional rule in politics is that a running mate should do no harm. Political science research has shown that Palin negatively affected McCain's bid for the presidency.

"If a voter viewed Sarah Palin as being unqualified, that ultimately diminished their chances of voting for the Republican ticket," explained Kyle Kopko, co-author of the book Do Running Mates Matter? The Influence of Vice Presidential Candidates in Presidential Elections.

Kopko says it's not that people voted for or against Palin directly, but McCain's choice affected voters' overall perception of him as a candidate.

"You were more likely then to question his judgment — maybe he isn't someone who can adequately perform the job of president, maybe he's too old to be president and so on and so forth," explained Kopko.

Kopko and his collaborator Christopher Devine have found that running mates can indirectly affect an election, as evidenced in the McCain-Palin case.

But he cautions there's not much evidence showing a direct impact from choosing a running mate from a particular demographic group or a specific state or region, with the hopes of picking up an advantage in the Electoral College.

"Our research shows that that very rarely happens," Kopko said. "And that tends to be really overstated by political commentators."

Still, Kopko says this choice is a presidential candidate's first major decision, so by promising to choose a woman, Biden sends a cue to voters about his priorities.

But the gender dynamics for Biden have become complicated. In part, that's because the process of selecting a running mate coincides with news that Biden is facing a sexual assault allegation from a former staffer.

He firmly denies the accusation, but the allegation still means that some of the women being considered for the job are already in the position of having to defend Biden, which many of them seem willing to do.

The prominent feminist writer Rebecca Traister outlined this as a "trap" at length for The Cut.

While Biden has made it clear that he'll select a woman, that's not sufficient for some Democrats.

They've been outspoken in calling on Biden to choose a woman of color, in hopes of energizing the Democratic base, particularly since Biden does not personally embody the diversity of the party.

Aimee Allison, president and founder of She The People, a group focused on the political power of women of color, has written that choosing a minority woman is "more than a consolation prize, it's a necessity."

"I've made it very clear, like a lot of other people, that it would be great if the choice were a woman of color," said South Carolina Rep. Jim Clyburn, the highest-ranking African American member of the House. Clyburn's endorsement of Biden was seen as a key moment in helping Biden secure the Democratic nomination.

Although he has been very public about his desire to see a woman of color in the vice presidential slot, Clyburn also told NPR it's "not a must."

What's more important, he says, is the relationship between running mates and how the public perceives it.

It was a last-minute choice that involved no background check. Eighteen days later, after stories started circulating about Eagleton having been hospitalized for depression and undergoing electroshock treatment, he withdrew his candidacy.

Attitudes around mental health treatment have evolved since that time, but the point is that McGovern's campaign was caught off guard because it hadn't properly vetted Eagleton. That continues to haunt Democrats, since McGovern went on to lose 49 states to President Richard Nixon. 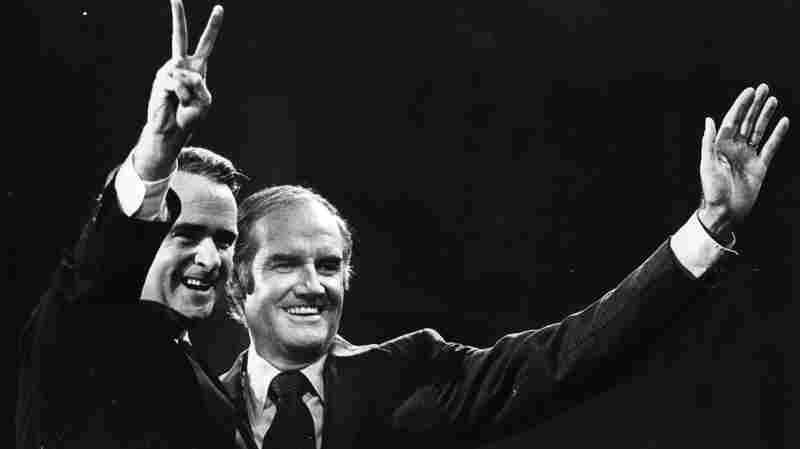 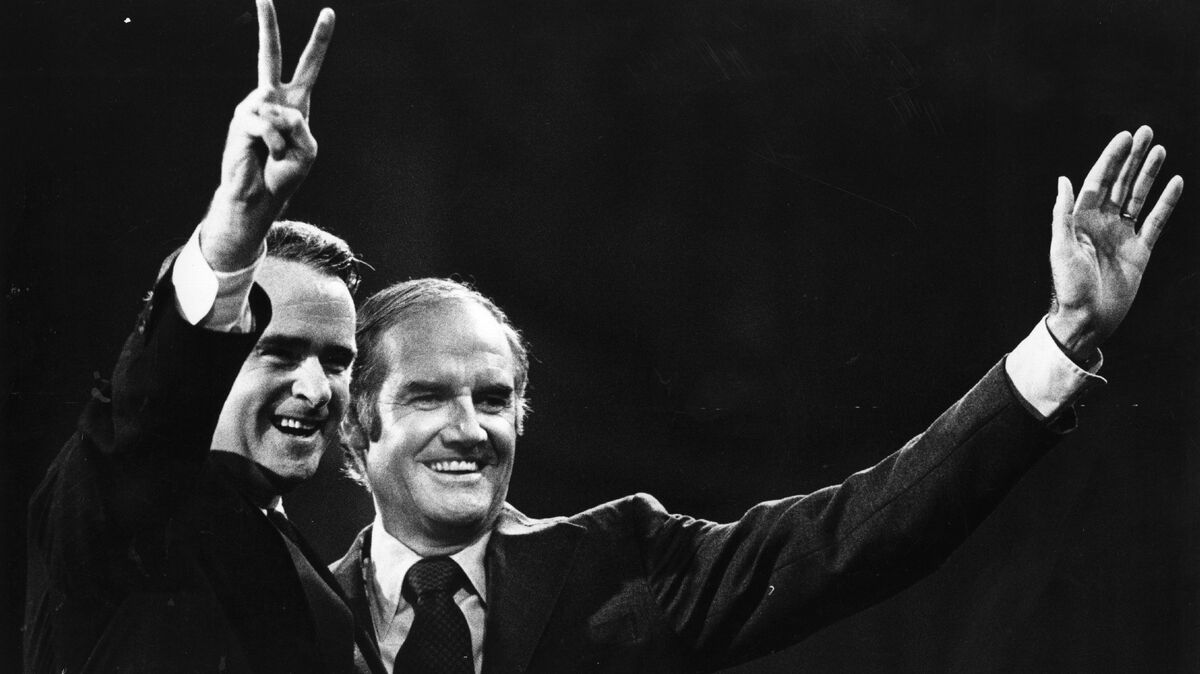 Searching for his own Biden

Biden is in the unique position of having held the very job for which he's now trying to find a replacement. Democratic operative Tad Devine thinks that undoubtedly influences Biden's decision.

"I think when you have that perspective of being the vice president, the relationship between yourself and the president is really important to you as the potential president," Devine said.

But that's about governing, and Devine is personally skeptical of how much a vice presidential pick genuinely affects the election. He has a "bias," he says, because he was campaign manager for 1988 Democratic vice presidential nominee Lloyd Bentsen. 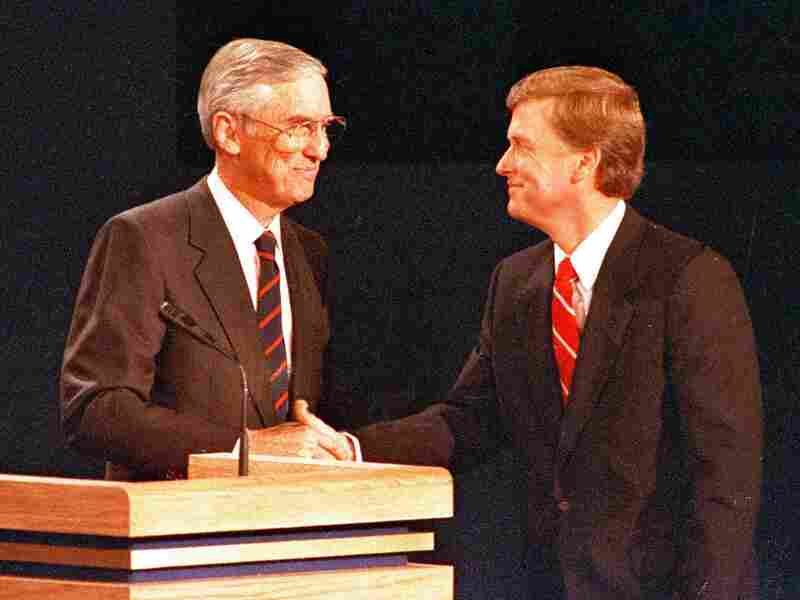 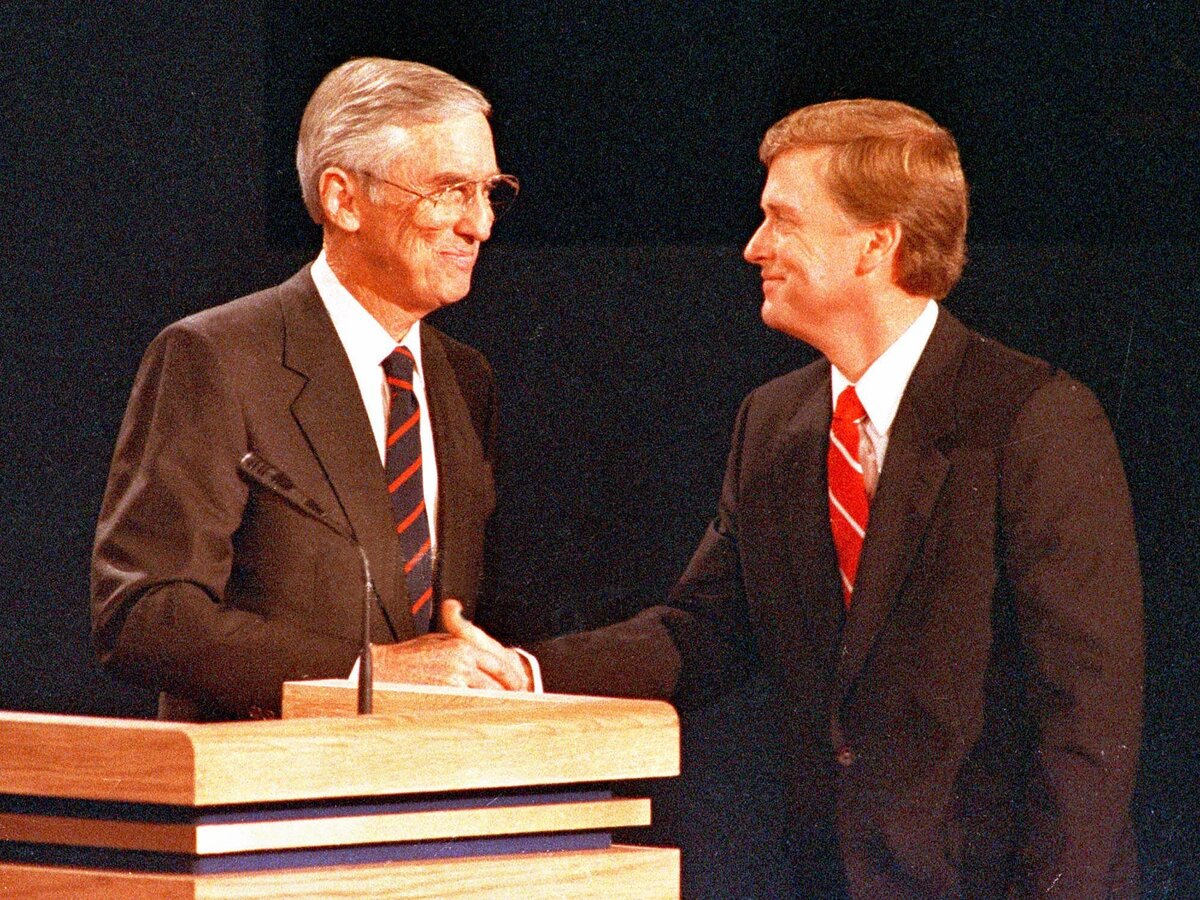 Vice presidential nominees Lloyd Bentsen and Dan Quayle shake hands after their vice presidential debate in 1988. At the debate, Quayle compared his level of experience to the late President John F. Kennedy. Bentsen famously retorted, "Senator, you're no Jack Kennedy."

That year, the Texas Democratic senator was Massachusetts Gov. Michael Dukakis' running mate, and with experience in Congress dating back nearly 40 years was widely considered more qualified than his Republican opponent, Dan Quayle, who had been in Congress just over a decade.

"I saw that even when you have an incredible mismatch of vice presidents on both sides, that in the end doesn't really affect the outcome of the election that much," said Devine.