Accessibility links
As Trump Pushes Theory Of Virus Origins, Some See Parallels In Lead-Up To Iraq War The White House continues to say the coronavirus may have leaked from a Chinese lab. That's at odds with the assessment of the intelligence community and reminds some of the run-up to the Iraq war. 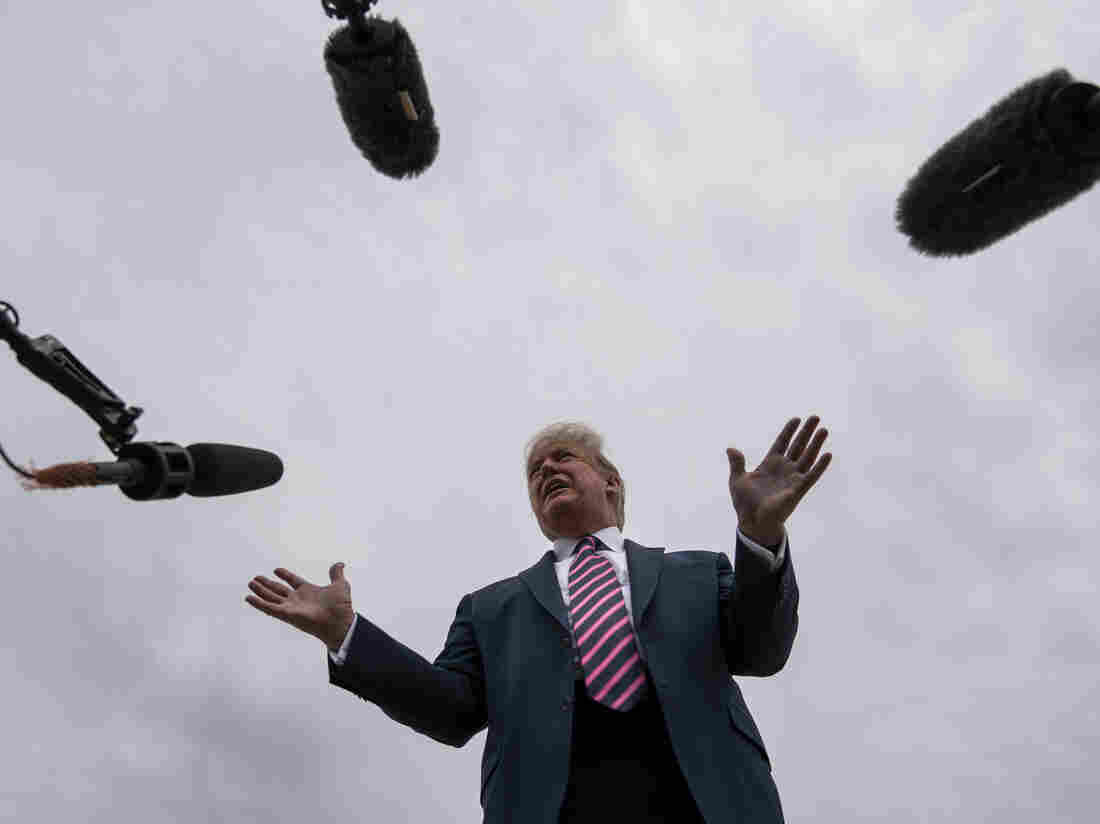 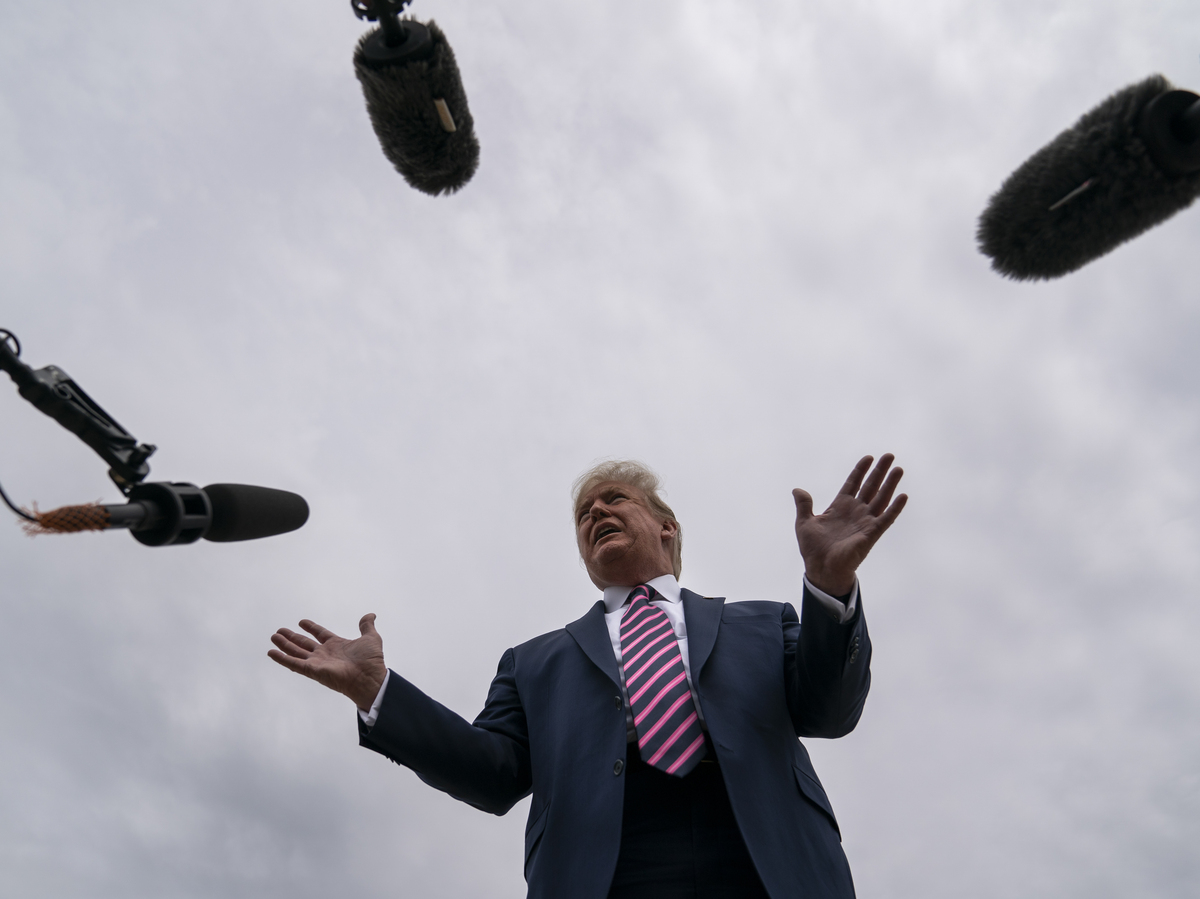 President Donald Trump talks to reporters before boarding Air Force One on May 5.

Over the past week, President Trump and his team have repeatedly claimed to have intelligence showing that the new coronavirus accidentally escaped from a lab in China.

But an official statement from America's intelligence chief says there's not yet conclusive evidence for that theory. Outside scientists, meanwhile, say that the chances of a lab accident are very small, while the odds of a natural infection are high.

Some former intelligence officials and independent analysts now say that the disconnect echoes missteps that led to the 2003 invasion of Iraq. While the circumstances are different, the analysts warn that the administration's continued pursuit of the lab theory could signal an unhealthy relationship between top administration officials and the agencies tasked with giving them information.

But others say they don't believe the president is misusing intelligence. Rebeccah Heinrichs, a senior fellow at the conservative Hudson Institute, points out that the president has little motivation for pushing the lab theory, when there are other aspects of China's handling of the pandemic that are easier to criticize.

"This thing does not need to have come from a lab in order for there to be a perfectly legitimate case to be made that a lot of this illness and economic devastation is the fault of the Chinese government," she says.

The theory of a laboratory release has been percolating since the earliest days of the coronavirus pandemic. Scientists and intelligence agencies have ruled out the possibility that the virus might have been a bioweapon gone wrong, or that it was genetically engineered by humans.

But that still leaves open the possibility that a lab could have somehow accidentally released a natural sample of the virus.

The Chinese city of Wuhan, where the pandemic began, is also home to the Wuhan Institute of Virology, a top-tier Chinese research center that studies coronaviruses from bats. The SARS-CoV-2 virus that causes COVID-19 is 96% similar to a natural bat virus that the institute had on file — leading some to suspect the lab itself could have been the source.

Many scientists have publicly expressed doubt that the lab is behind the virus. While impressive sounding, 96% similarity actually means the Wuhan Institute's sample is only a distant cousin of the current COVID-19 virus. And the lab was known to follow internationally established safety protocols that would have made an accidental release extremely unlikely. 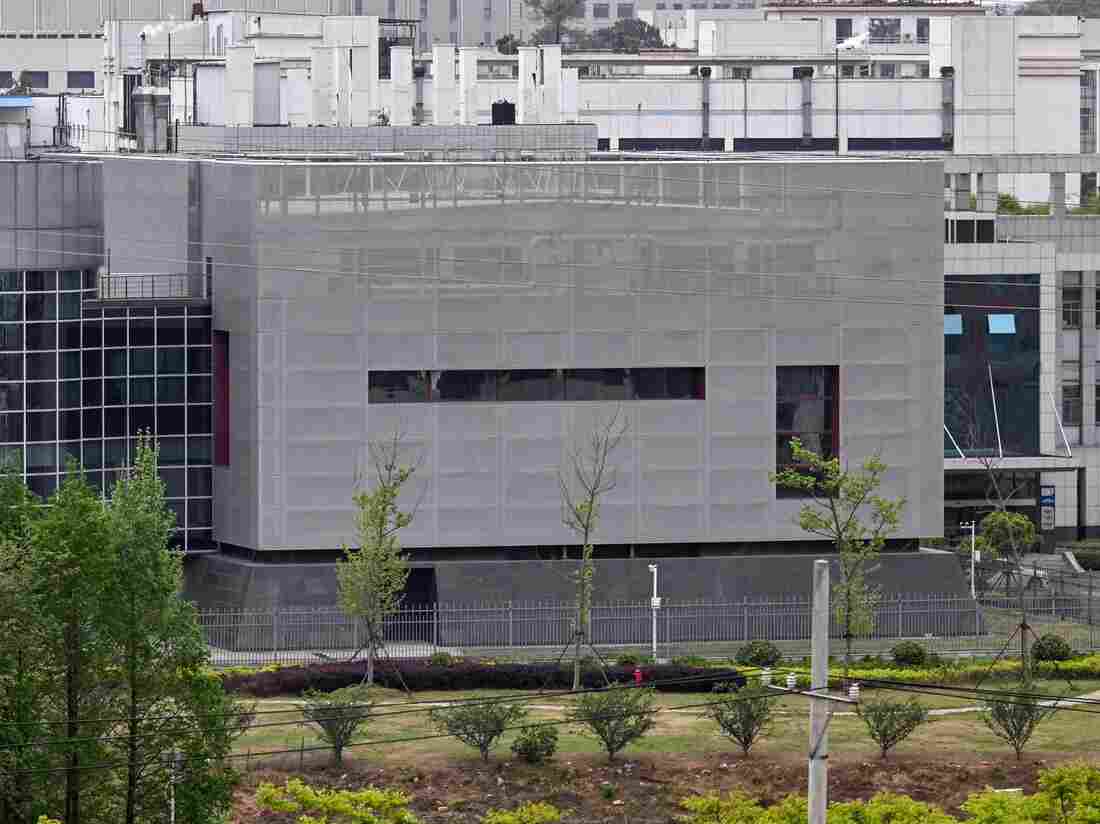 Trump has said he's seen evidence that the coronavirus was accidentally released by the Wuhan Institute of Virology, but he has declined to share the evidence publicly. HECTOR RETAMAL/AFP via Getty Images hide caption 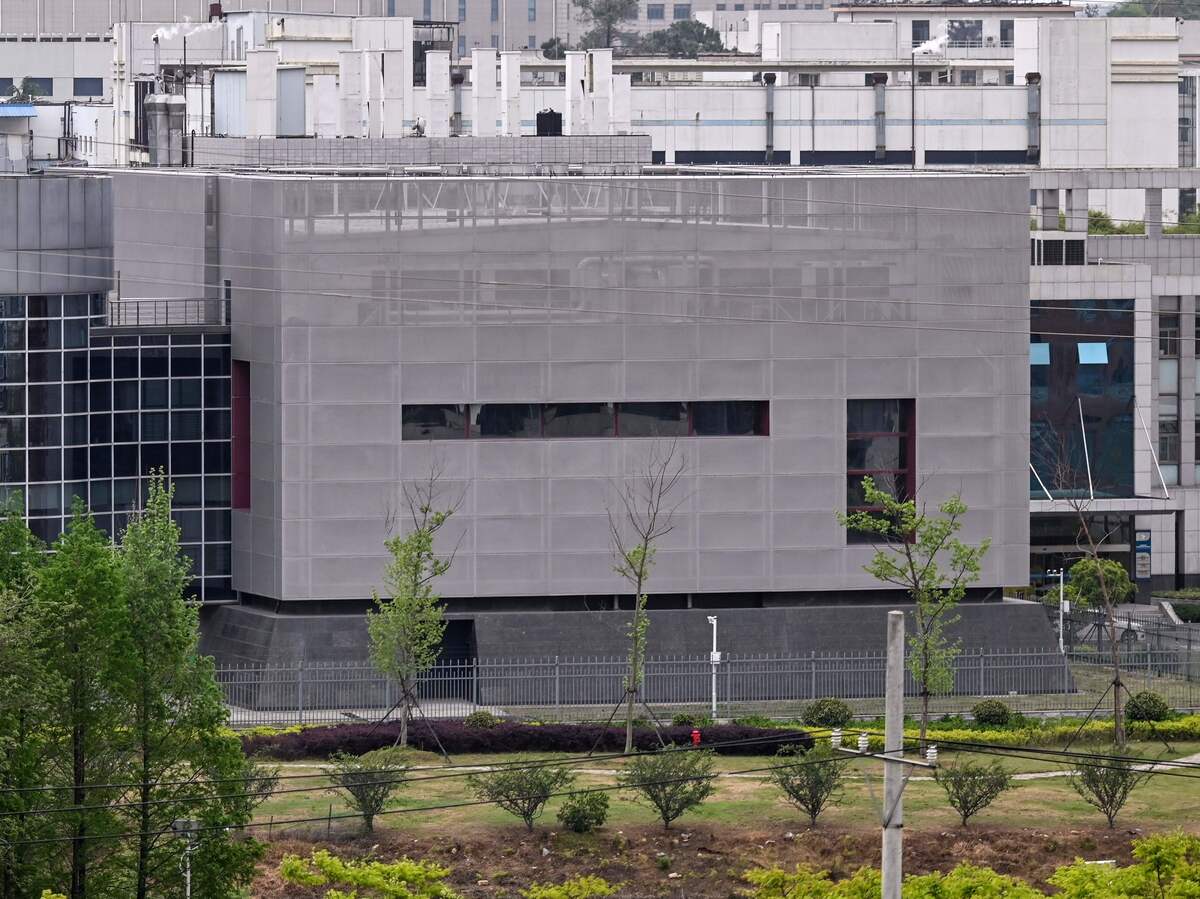 Trump has said he's seen evidence that the coronavirus was accidentally released by the Wuhan Institute of Virology, but he has declined to share the evidence publicly.

Nevertheless, when Trump was asked about the possibility last week, he said he had a high degree of confidence that the virus came from the Wuhan Institute of Virology. His statement was made on the same day that the Office of the Director of National Intelligence publicly said it had not settled on an origin for the virus.

"The [intelligence community] will continue to rigorously examine emerging information and intelligence to determine whether the outbreak began through contact with infected animals or if it was the result of an accident at a laboratory in Wuhan," the statement read in part.

Morell says he believes the disconnect means that the president and Secretary of State Mike Pompeo, who made similar claims on Sunday, are jumping ahead of the actual intelligence assessments.

"I just don't think the evidence is there yet, either from the intelligence community or from the scientific community, to give the president the credibility to actually say that," he says.

"What it reminds me of is the dispute between the CIA and parts of the Bush administration over whether there was an operational relationship between Saddam Hussein and al-Qaida," says John McLaughlin, a professor at the Johns Hopkins School of International Studies, who served as deputy and acting director of the CIA from 2000 to 2004.

The office of then-Vice President Dick Cheney continued to press the idea that there was a link even though intelligence agencies had not yet reached a conclusion, McLaughlin says.

"They kept asking the CIA," he says. "And we kept coming back and saying, 'You know, it's just not there.'"

Morell adds that Cheney continued to assert a link "even after the intelligence community made an assessment that there was no relationship between Iraq and al-Qaida."

Morell and McLaughlin aren't the only ones who see parallels between the lead up to the war in Iraq and the current pressure on China. Jeffrey Lewis, director of the East Asia Nonproliferation Project at the Middlebury Institute of International Studies at Monterey says that in the case of Iraq, the administration's interests warped intelligence. He fears it could be happening again.

Things get even murkier outside the intelligence agencies. In the case of Iraq, U.S. agents were fed forged documents made to show Iraq was trying to get uranium from Niger. Lewis thinks the forgers were just after money, and he thinks it could happen again.

"Let me tell you, there are a lot of people from around the world who would be only too happy to forge a Chinese document talking about how there was an escape from a laboratory in Wuhan," he says.

On the other hand, U.S. intelligence agencies may have captured actual circumstantial evidence suggesting a lab accident, says Christopher Johnson, a former CIA officer who now heads the China Strategies Group, an independent consulting firm. Chinese officials have almost certainly discussed the possibility of an accident, he believes.

He also says that the state's security apparatus has likely moved to shut down evidence of a lab accident, whether one happened or not. "That's a function of their system," he says.

However, Johnson says none of this would be sufficient evidence for the intelligence community to determine that an accident triggered the pandemic.

Despite clear interest from the Trump administration, not everyone is convinced that the intelligence community will be easily persuaded to back the lab leak theory if there isn't sufficient data.

Heinrichs says she thinks intelligence analysts know how to keep politics out of their assessments. "I don't think that they would come to the conclusion that this may have happened because they're feeling pressure from the top," she says.

McLaughlin agrees. Post Iraq, he says, "there are so many sensitivities about being pushed to conclude something that you don't really believe, that if you are perceived as doing that, it's kind of a career-killer," he says.

But Lewis worries that the administration might intentionally or unintentionally cherry-pick from what's likely to be a mountain of intelligence to support the lab-leak theory.