Accessibility links
School Reopening Plans: 'A Logistical Nightmare' Governors are starting to float ideas for reopening schools. But there are many concerns about what education will look like when that happens. 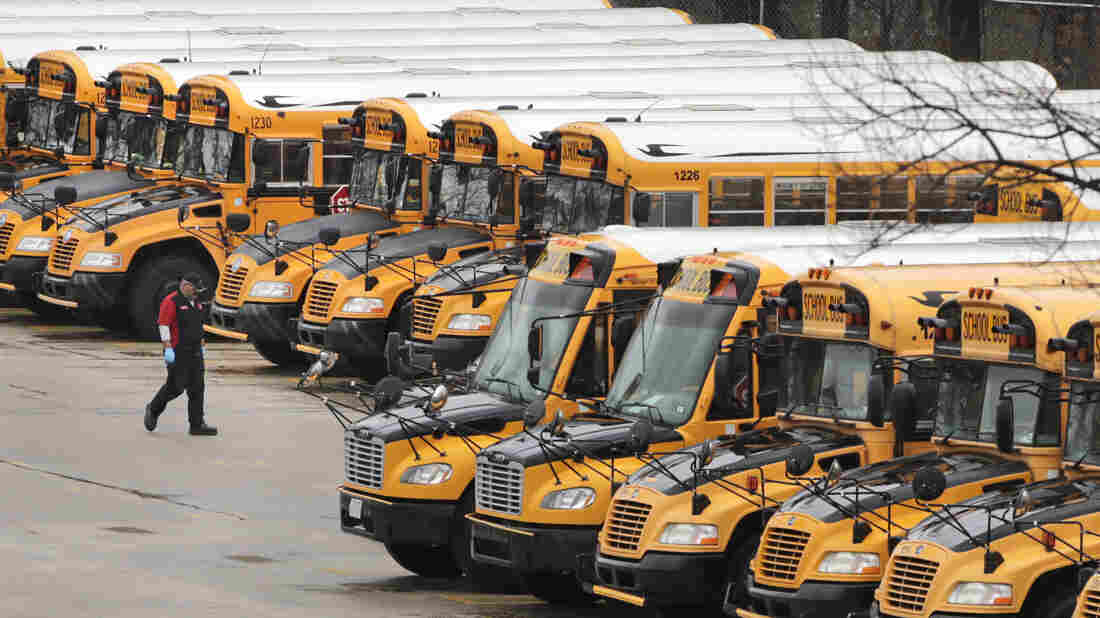 A worker passes public school buses parked at a depot in Manchester, N.H., last month. The state's public school buildings are closed to students through the end of the academic year. Charles Krupa/AP hide caption 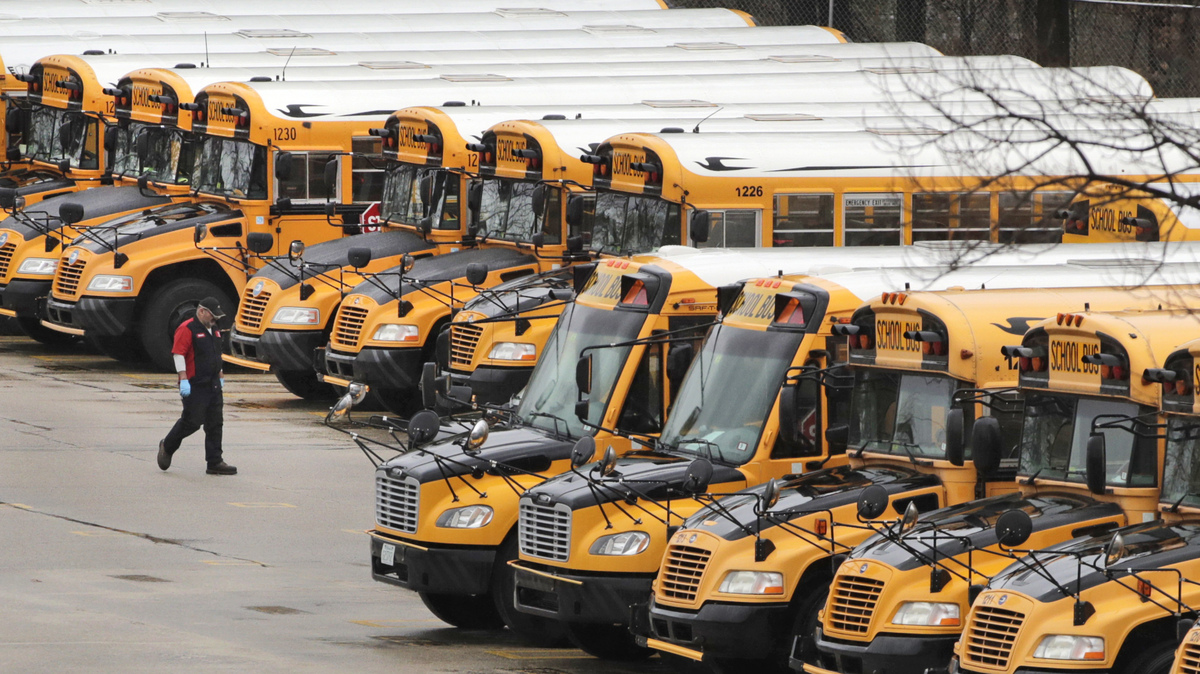 May 7 is the date that Montana Gov. Steve Bullock, a Democrat, declared it was safe to open up schools. The state has had fewer than 500 reported cases of the coronavirus as of this week.

But according to the state's Office of Public Instruction, just a few school districts in small towns have taken the governor up on the offer. That gap — between a state executive proclaiming schools OK to open and the reality of tiny groups of students gathering in just a few schools — shows the logistical challenges educators and state officials around the country face in any decision to reopen.

Willow Creek School in Three Forks, Mont., is opening its doors and expects a few dozen of its 56 students to show up. Troy, a northwestern Montana town, is holding limited and voluntary "study hall" visits, focusing on special education students, as well as some outdoor activities. The town of Glasgow says it will open its schools on a limited basis to students without devices.

Libby, a town of fewer than 3,000 people, is allowing students to come back to the single middle/high school to meet face to face with teachers, for what amounts to targeted tutoring sessions. They can sign up for an appointment to get help in a subject they're struggling with.

Craig Barringer, the superintendent of Libby's schools, said that educators made this decision based on surveying parents. When it came to elementary school students, "The parents felt they were more able to handle them and/or more able to help them."

Not so at more advanced academic levels. "When you get into even seventh-grade math, parents can't give the assistance that they need if they really get stuck."

There's a long list of precautions being taken, Barringer says.

Students will be greeted at the door. They'll be encouraged to wear masks. They've put up hand-sanitizing stations. "We have breaks in between scheduled appointments so we can clean and air out the smell of cleaner."

Public schools play a range of roles in society beyond education. As child care for millions of working parents, they are a cornerstone of any attempt to reopen the economy. They are hubs for community relationships and distribution points for essential social services.

But, before any of that, they must be safe places for children. With those various functions in mind, education leaders are putting out plans that forecast some very big changes to what public school might look like in the coming months and even years.

The complications are leading to a patchwork effect and a disconnect between levels of government in many places.

In California, Gov. Gavin Newsom, a Democrat, talked about trying to open up for summer school as soon as July. But school leaders in Palo Alto and Sacramento countered that it would be more likely that they'd have to push the start of the school year later by a few weeks because of all the planning necessary to open up safely.

In Georgia, even as Gov. Brian Kemp, a Republican, has been out ahead of the rest of the country on opening up some businesses, there are a few districts that chose to end the school year early, putting an end to their efforts with remote learning.

And Washington, D.C., public schools have also decided to end the school year early, pledging to tack those weeks back on by starting earlier in August. In Washington state and in Chicago, leaders have acknowledged that some form of remote learning might continue off and on through the 2020-2021 school year or even beyond.

In the past few days, the American Federation of Teachers, the nation's second-largest teachers union, put out a detailed blueprint for reopening. And so did the American Enterprise Institute, the conservative think tank, which asked retired state superintendents, city chancellors and other school leaders to weigh in.

These two plans have a lot in common as far as basic medical recommendations: the need for rapid and repeated coronavirus testing of students and staff, contact tracing, stepped-up hygiene and cleaning, and reducing class sizes to allow for social distancing.

Here are four tough problems that are on experts' minds:

New York Gov. Andrew Cuomo, a Democrat, this week announced that the state will be working with the Bill & Melinda Gates Foundation (which is a supporter of NPR) to "reimagine schools." The foundation has backed a range of technological innovations in education, from AI to "personalized learning," sometimes generating controversy.

Regardless of the particular path any district takes, the pandemic is likely to be a turning point as far as the role of technology in public, K-12 education.

The AFT and AEI blueprints both say remote learning should continue while schools are doing staggered schedules, so that all the kids can keep up. Both plans also foresee further waves of the virus leading to future school shutdowns, another reason to keep remote learning plans in place just as school districts have done for years in the case of snow days or tornadoes.

The plans envision schools running in parallel, both online and in-person. That requires huge investments going forward in materials, equipment and training for teachers, and equipment and connectivity for families.

Serving the neediest and traumatized kids

Beyond the risk of spreading the virus, there's a laundry list of other concerns to consider, both the AFT and AEI plans say. Learning loss. Missed socialization. A probable increase in child abuse and domestic violence while students have been home. Lost family members. Many, many families out of work.

To meet all of these needs, the American Federation of Teachers plan recommends an idea that's been around for a while: "community schools." Public schools across the country right now are being used for food distribution. Clearly, that's become their essential, non-duplicated function in an emergency. Could more schools, then, add housing, mental health or health care services on top of that?

A related idea is to bring the kids with likely higher needs back to campus early, or keep them there longer, such as for summer school. As Troy, Mont., and schools in other countries like Israel have done, should educators focus on bringing back special education services first?

"I think it mitigates inequalities if you start the most vulnerable kids first," says Randi Weingarten, the head of the AFT.

The AEI plan points out that there are privacy problems both with online learning and with the kind of public health surveillance required to control a pandemic in person.

"What data is it OK to share?" asks Rick Hess at AEI, who co-authored the report. "If we're talking about tracking and tracing, we're getting very invasive."

And then, with remote learning, Hess adds, "a lot of school districts are relying upon products that were never designed to be used with tens of millions of children at home." He points to incidents of "Zoombombing," online harassment and pranks that led many large school districts to abandon the videoconferencing service.

A seemingly minor issue that illustrates how complicated it can really be to open schools is transportation. As the AEI plan points out: How can you do social distancing on the school bus? Do you run three times as many school buses so each kid gets their own row? Do you do that at the same time as you're still using buses to run food to students, as many districts in rural areas are doing?

The more you dig into the details, the more you realize how staggering of an effort this will be.

"It's going to be a scheduling nightmare, a logistical nightmare," Weingarten sums up. "And God forbid a kid or a teacher gets sick. The knives are going to come out that the school is responsible for it."