Accessibility links
U.S. Field Hospitals Stand Down, Most Without Treating Any COVID-19 Patients Across the U.S., convention centers and empty fields were transformed into emergency field hospitals at a cost to federal taxpayers of more than $660 million. Most haven't treated a single patient. 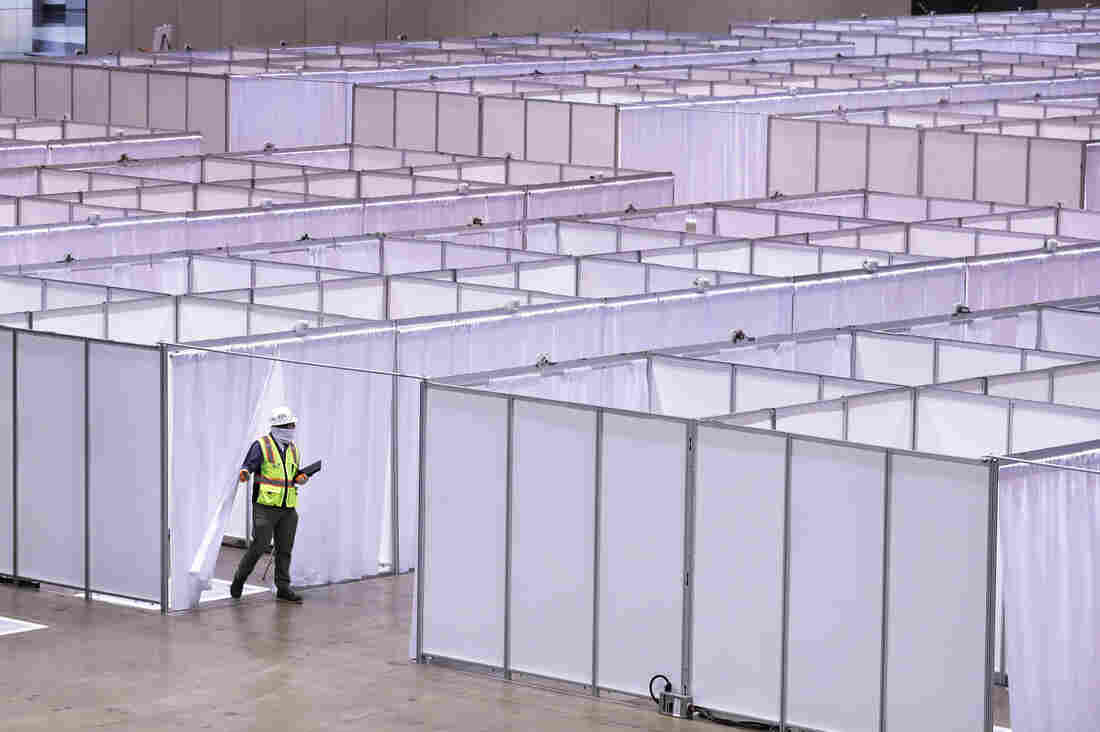 Construction at the COVID-19 field hospital at McCormick Place in Chicago on April 10. The city pared back plans for a 3,000-bed temporary hospital at the nation's largest convention center as infection numbers decreased. Nam Y. Huh/AP hide caption 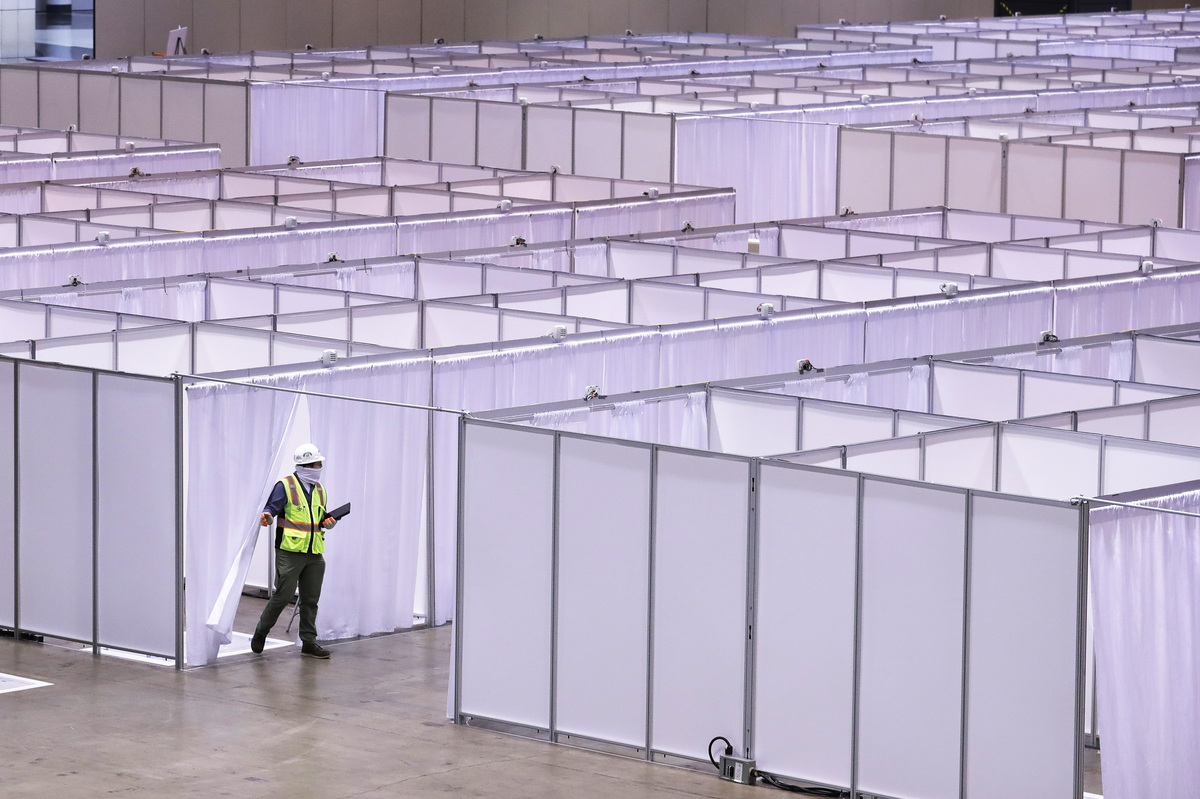 Construction at the COVID-19 field hospital at McCormick Place in Chicago on April 10. The city pared back plans for a 3,000-bed temporary hospital at the nation's largest convention center as infection numbers decreased.

As hospitals were overrun by coronavirus patients in other parts of the world, the Army Corps of Engineers mobilized in the U.S., hiring private contractors to build emergency field hospitals around the country.

The endeavor cost more than $660 million, according to an NPR analysis of federal spending records.

But nearly four months into the pandemic, most of these facilities haven't treated a single patient.

Public health experts said this episode exposes how ill-prepared the U.S. is for a pandemic. They praised the Army Corps for quickly providing thousands of extra beds, but experts said there wasn't enough planning to make sure these field hospitals could be put to use once they were finished.

"It's so painful because what it's showing is that the plans we have in place, they don't work," said Robyn Gershon, a professor at New York University's School of Global Public Health. "We have to go back to the drawing board and redo it."

But the nation's governors — who requested the Army Corps projects and, in some cases, contributed state funding — said they're relieved these facilities didn't get more use. They said early models predicted a catastrophic shortage of hospital beds, and no one knew for sure when or if stay-at-home orders would reduce the spread of the coronavirus.

Michigan Gov. Gretchen Whitmer, a Democrat, said: "These 1,000-bed alternate care sites are not necessary; they're not filled. Thank God."

Senior military leaders also said the effort was a success — even if the beds sit empty. Gen. John Hyten, vice chairman of the Joint Chiefs of Staff, was asked at a news conference if it bothered him to see the field hospitals go unused.

"For gosh sakes, no," Hyten said. "If you see beds full, that means the local capacity of the local hospitals to handle this [has] been overwhelmed. And now we're into an emergency situation."

The Army Corps started building more than 30 field hospitals, retrofitting convention centers and erecting climate-controlled tents, in mid-March. Agency officials pushed to get these facilities done fast — limiting the bidding process and often negotiating directly with contractors they knew could deliver on time.

"I tell our guys, you have three weeks," Lt. Gen. Todd Semonite, commander of the Army Corps of Engineers, said at a Pentagon news briefing in March. "You get as much as you can [get] done in three weeks. And then the mission is complete. We have a narrow window of opportunity. If we don't leverage that window of opportunity, we're gonna miss it."

At Chicago's McCormick Place, workers scrambled in April to transform the convention center into a massive temporary hospital with 3,000 beds — more than the biggest hospital in Illinois.

"This was an empty convention hall," Illinois Gov. J.B. Pritzker said during a news conference while flanked by construction workers in hard hats and bright yellow vests. "Monumental, round-the-clock dedication is what got this done before we need it, preparing for saving lives in the event that things become as bad as some have predicted."

But just as construction got underway, states were issuing stay-at-home orders. And the spread of the coronavirus eventually began to slow.

Work on the field hospitals continued, though some projects were scaled back — including McCormick Place. The field hospital opened with one-third of the beds originally planned, and it closed its doors a few weeks later after treating fewer than 40 patients.

The same story is playing out across the country. In fact, most Army Corps field hospitals haven't seen a single patient.

In many parts of the U.S., hospitals were able to expand their capacity to keep up with the surge of coronavirus patients. But in New York, hospitals were overwhelmed, and local officials pleaded with the public to save hospital beds for people who needed them most.

"The mantra was, 'Don't come to the hospital, don't go to the doctor, stay home, stay home till your lips turn blue,' " said Gershon of NYU's School of Global Public Health. "Well, we now know that was a crazy set of advice."

Gershon said she worries that a lot of people followed that advice and that some may have died because of it — including a cousin of hers on Long Island. He stayed at home as he got sicker, Gershon said, and later died on a ventilator in the hospital.

Contractors built two field hospitals on Long Island, on the campuses of the State University of New York at Stony Brook and SUNY Old Westbury, at a total cost of more than $270 million.

The Army Corps limited the competition in awarding the projects to speed the process, which usually takes six to nine months, according to agency documents. Officials noted they were able to complete the contract award for the Stony Brook project in a "little more than three days."

"This time savings was critical in order for construction to begin as quickly as possible, supporting the unusual and compelling nature of the urgency of this procurement and the national emergency," the document said.

The two Long Island field hospitals were completed in late April. They never opened to the public and didn't treat any patients.

The temporary hospitals in New York haven't been taken down. They're on hold in case they need to be reopened in the future, according to a state health department spokesman.

New York has "so far avoided the worst-case scenario we were preparing for," the spokesman said in a statement. "There has been a reduced need for hospital beds, and as of now we are not moving forward on purchasing supplies and equipment or securing staff for these sites."

Even in New York City, where the Army Corps field hospital did treat COVID-19 patients, it never reached full capacity.

"There are a lot of losers in it and not a lot of winners," said Dario Gonzalez, an emergency doctor with the New York City Fire Department who helped lead the medical response at the temporary hospital at the Javits Center in Manhattan.

"It was very disappointing," Gonzalez said. "Everybody was here, ready to work, ready to get patients in." 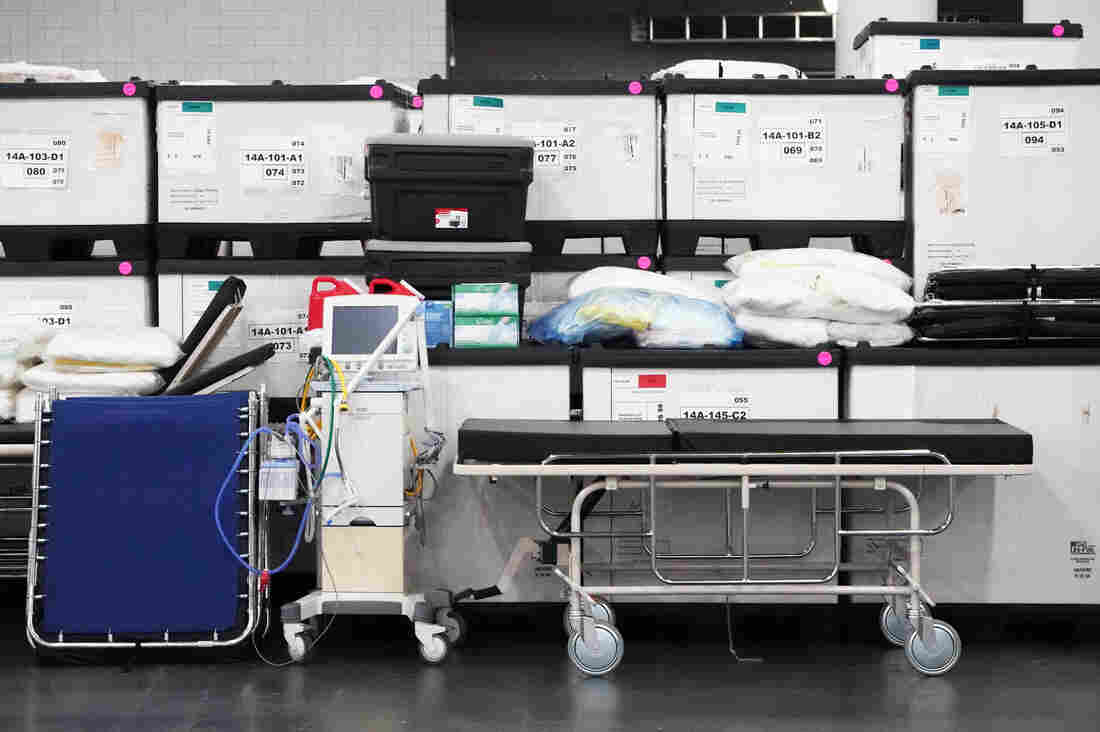 Medical supplies are viewed inside the Javits Center in March in New York City. The Javits field hospital treated about 1,100 patients while it was open for three weeks. Bryan R. Smith/AFP via Getty Images hide caption 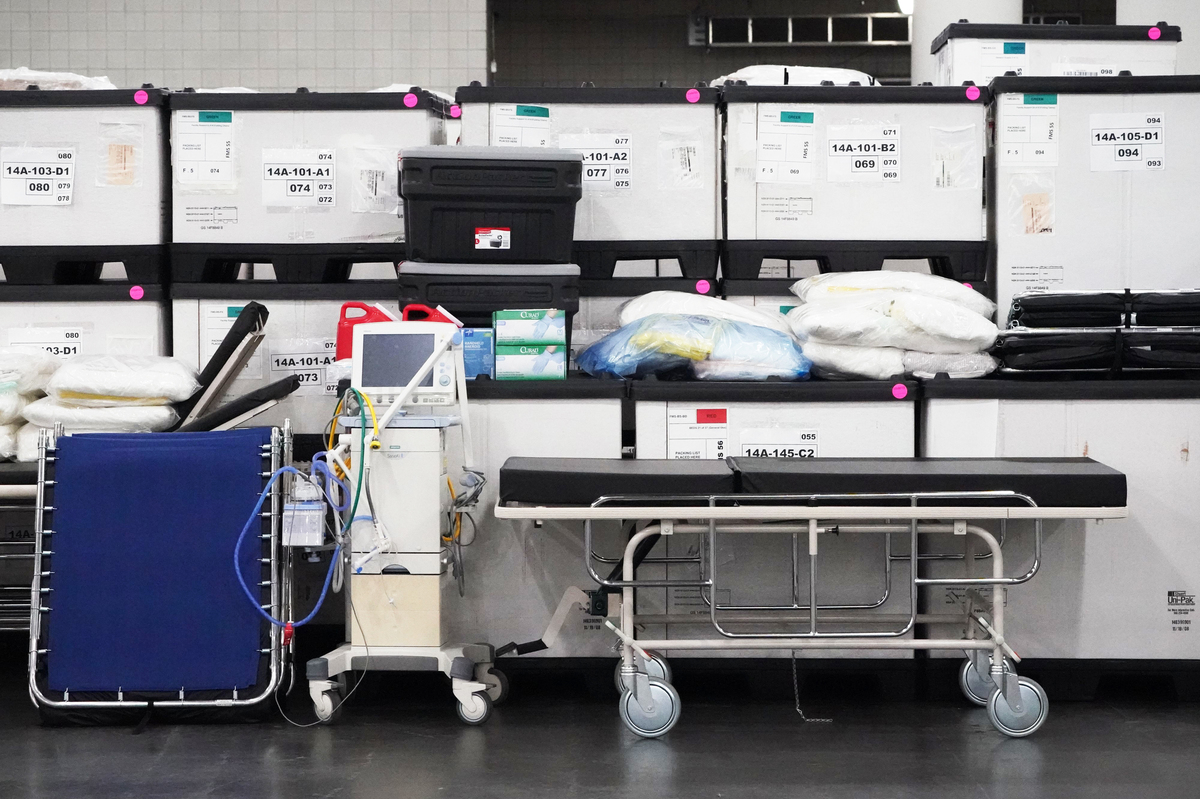 Medical supplies are viewed inside the Javits Center in March in New York City. The Javits field hospital treated about 1,100 patients while it was open for three weeks.

The plan was for the Javits Center to take patients from overwhelmed hospitals in the city. But in practice it wasn't that easy. Some hospitals complained that the intake process was too complicated. And they sent few patients to Javits — even as they resorted to treating patients in the hallways.

During the three weeks it was open, the Javits field hospital treated about 1,100 patients. Gonzales said it could have handled a lot more.

"We all could have done a much better job," Gonzalez says. "And we've got to really get it together to get that right the next time."

Officials in other states such as Illinois and Michigan also said field hospitals can be quickly reopened if there's an increase in coronavirus cases.

"We really wanted to make sure that we were maintaining some of the physical infrastructure that has been built there. So that should we need it, it doesn't take us a long time to potentially turn that back on," said Allison Arwady, the public health commissioner in Chicago.

She said officials there are keeping a close eye on the number of COVID-19 patients in local hospitals.

"We watch it really closely every day," Arwady said. "And certainly if we start to see any direction that things are not going the right way, we stand ready in case that needs to be reassessed."