Accessibility links
Democracy At Risk In Central And Eastern Europe, Report Finds An annual survey by the watchdog Freedom House says authoritarian leaders and the influence of China and Russia are undermining democratic progress achieved since the end of the Cold War.

Democracy At Risk In Central And Eastern Europe, Report Finds

Democracy At Risk In Central And Eastern Europe, Report Finds 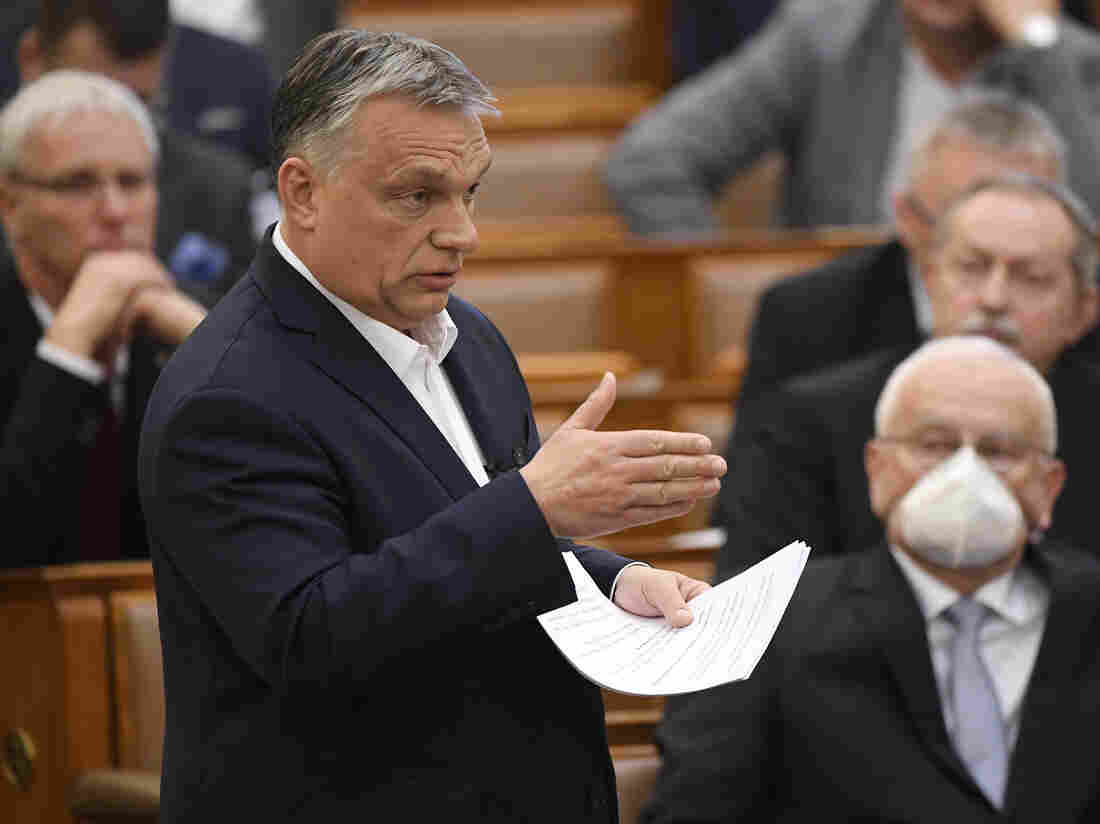 Hungarian Prime Minister Viktor Orban last month, when lawmakers granted him the power to rule indefinitely by decree. One aspect of the law, ostensibly passed to cope with the coronavirus, calls for prison terms for those convicted of spreading falsehoods or distorted facts during the emergency. Tamas Kovacs/AP hide caption

Hungarian Prime Minister Viktor Orban last month, when lawmakers granted him the power to rule indefinitely by decree. One aspect of the law, ostensibly passed to cope with the coronavirus, calls for prison terms for those convicted of spreading falsehoods or distorted facts during the emergency.

Democracy is weakening across Central and Eastern Europe as well as Eurasia amid the rise of Chinese and Russian influence, according to a new report by Freedom House, a nonprofit based in Washington, D.C.

The annual report — Nations in Transit 2020, Dropping the Democratic Facade — covers 29 countries from Central Europe to Central Asia and says there are now fewer democracies in the area than at any point in the past 25 years.

"Many leaders in this region are no longer pretending to care about democracy or the rule of law," Freedom House President Michael J. Abramowitz said in a statement, adding that the coronavirus pandemic is exposing the people of these countries to even more abuse.

The study found that Hungary no longer qualifies as a democracy, Poland is headed in the same direction, and China and Russia are compromising fragile democratic institutions in nations that emerged from the former Yugoslavia.

Abramowitz says both the European Union and the United States are failing to stand up for basic democratic values, ceding regional influence to Beijing and Moscow.

"It is time for European leaders who are committed to freedom to address the crisis in their own neighborhood," Abramowitz said. "The United States also has a pivotal role to play and should rededicate itself to a foreign policy that emphasizes the defense of democratic values."

Democracy fades within a democratic bloc of nations

Hungary is in the European Union, and yet Prime Minister Viktor Orban has faced little blowback from Brussels after a decade of dismantling democratic institutions. His nationalist Fidesz Party has demonized migrants and "pro-migration liberals" such as Hungarian American philanthropist George Soros.

Human rights monitors accuse Orban and Fidesz of stoking renewed anti-Semitism in Hungary by attacking Soros — among others — who survived the Holocaust in Budapest with forged papers.

Fidesz has sidelined its opponents by pushing through constitutional and legal changes to consolidate power. Most media outlets in Hungary are run by the government or its supporters. More recently, the government pushed through a revisionist school curriculum promoting nationalist writers and dropping the works of Hungary's only recipient of the Nobel Prize in Literature, Imre Kertesz, a Holocaust survivor.

Since March, Orban has been running the country by decree after securing emergency powers to manage the coronavirus pandemic. The emergency law has no sunset clause. Freedom House says Orban, who is a strong ally of President Trump, has "dropped any pretense of respecting democratic institutions."

Hungary's government spokesman, Zoltan Kovacs, responded by calling the report biased because it receives some funding from Soros' Open Society Foundations. "With their Soros funding they've declined, becoming the fist of the party that is the Soros network," Kovacs tweeted. "Anyone who doesn't conform to their liberal view, gets downgraded."

Mike Smeltzer, a Freedom House research analyst, points out that the nonprofit receives funding from many sources, including the U.S. government.

"The Hungarian government would rather try to shoot the messenger than deal with the substantive points raised in our reports, which exhaustively document a serious decline in freedom and democratic practice in the country," Smeltzer told NPR. "In our report, Hungary is the only country in the EU that's not a democracy." 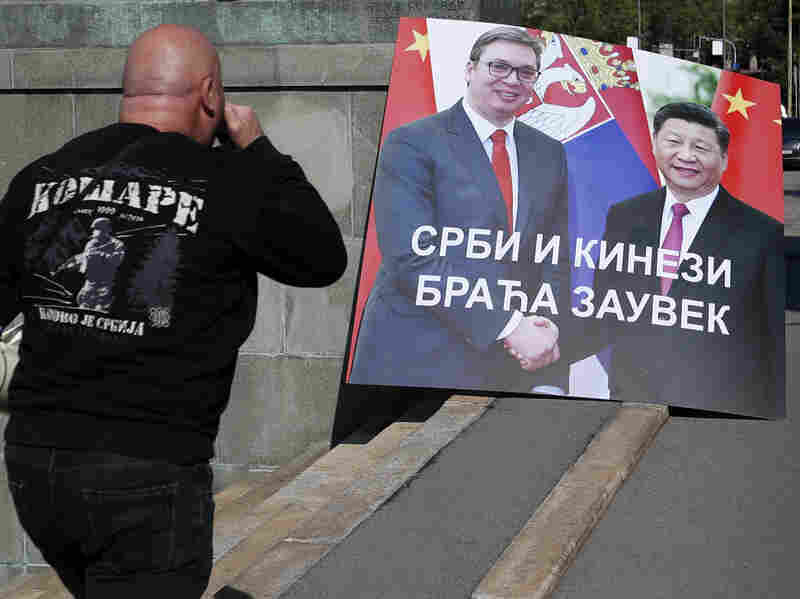 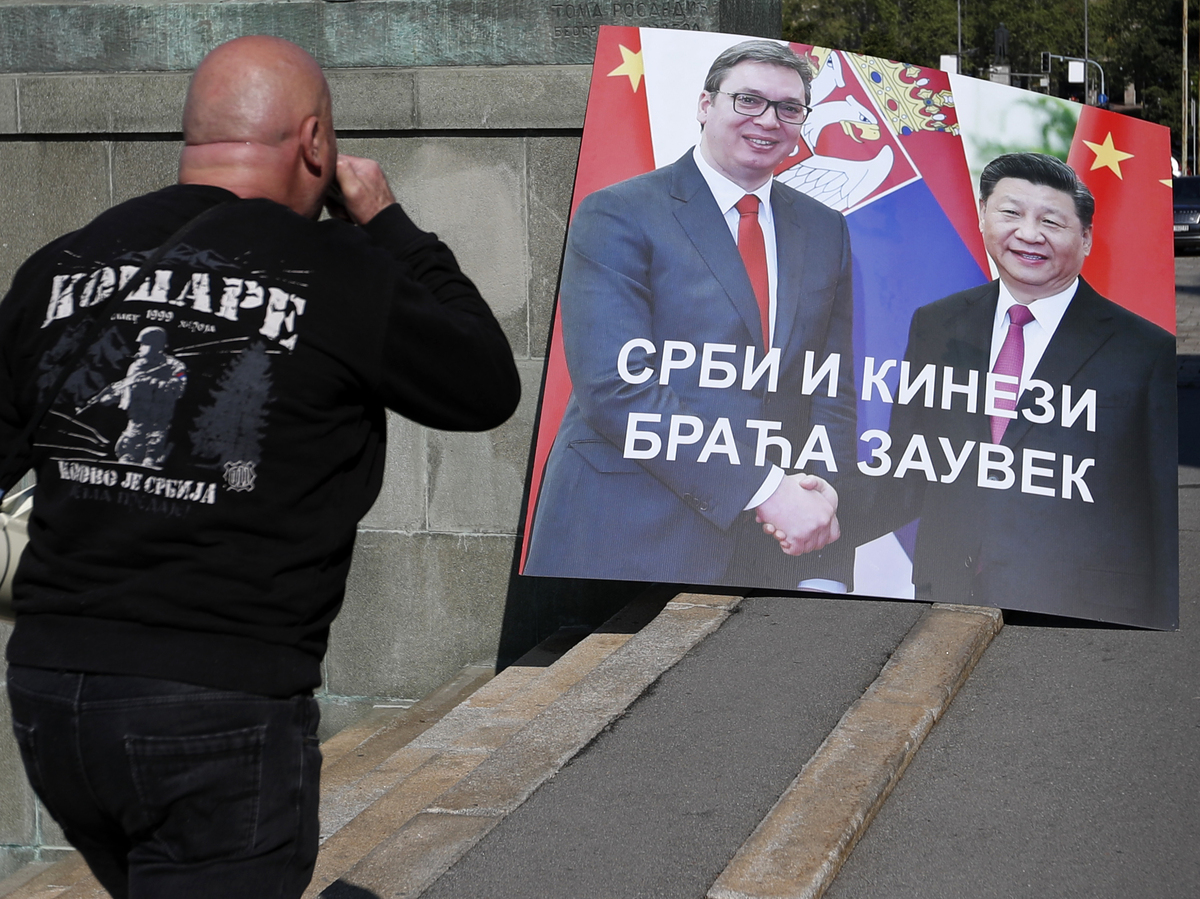 A man protests the declaration of a state of emergency last week in Belgrade with a banner showing Serbian President Aleksandar Vucic, left, and China's President Xi Jinping. The banner reads, "Serbs and Chinese Brothers Forever."

Freedom House says democracy is also slipping away in Poland, another EU nation. The report blames the "systematic, targeted, and aggressive nature of the government's attacks on judicial independence."

In the Balkans, Serbia and Montenegro — once part of Yugoslavia — have also seen democratic declines after "years of increasing state capture, abuse of power, and strongman tactics," according to the report. Serbian President Aleksandar Vucic and Montenegrin President Milo Djukanovic "have tipped those countries over the edge."

Stung by years of contentious relations with the EU, both countries have grown closer to Beijing and Moscow. "The Russian and Chinese governments are moving in with money and propaganda, trying to win hearts and minds," Smeltzer says. "And yes, it's in large part due to the absence of the EU and U.S. But that does not mean that Balkan politicians are not making use of the situation and trying to turn it to their own advantage."

In an effort to check China's growing financial influence in the Balkans, EU leaders on Wednesday expressed "unequivocal support" for all Balkan nations to eventually join the bloc. They also said they would help the Balkans with a coronavirus recovery plan in addition to $3.6 billion already promised.