Accessibility links
'Top Chef' Judge Tom Colicchio Explains What Restaurants Need To Survive The Top Chef judge is focused on keeping his industry afloat during the pandemic. "We're really looking at saving every restaurant, because we think that every restaurant needs to be there," he says. 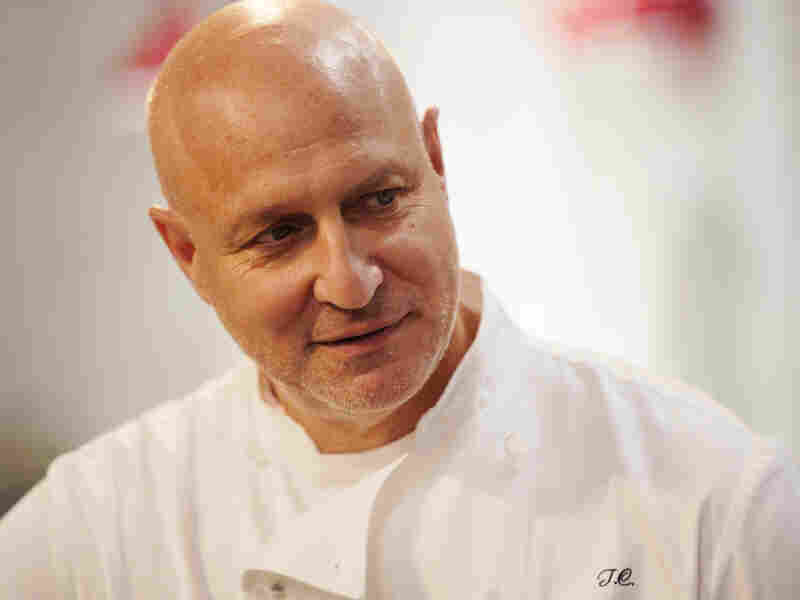 Tom Colicchio is a James Beard Award-winning chef and the lead judge on Bravo's Top Chef. Restaurants are "cultural centers" that provide a semblance of normalcy and connection in trying times, he says. Michael Hickey/Bravo/NBCU Photo Bank/NBCUniversal via Getty Images hide caption 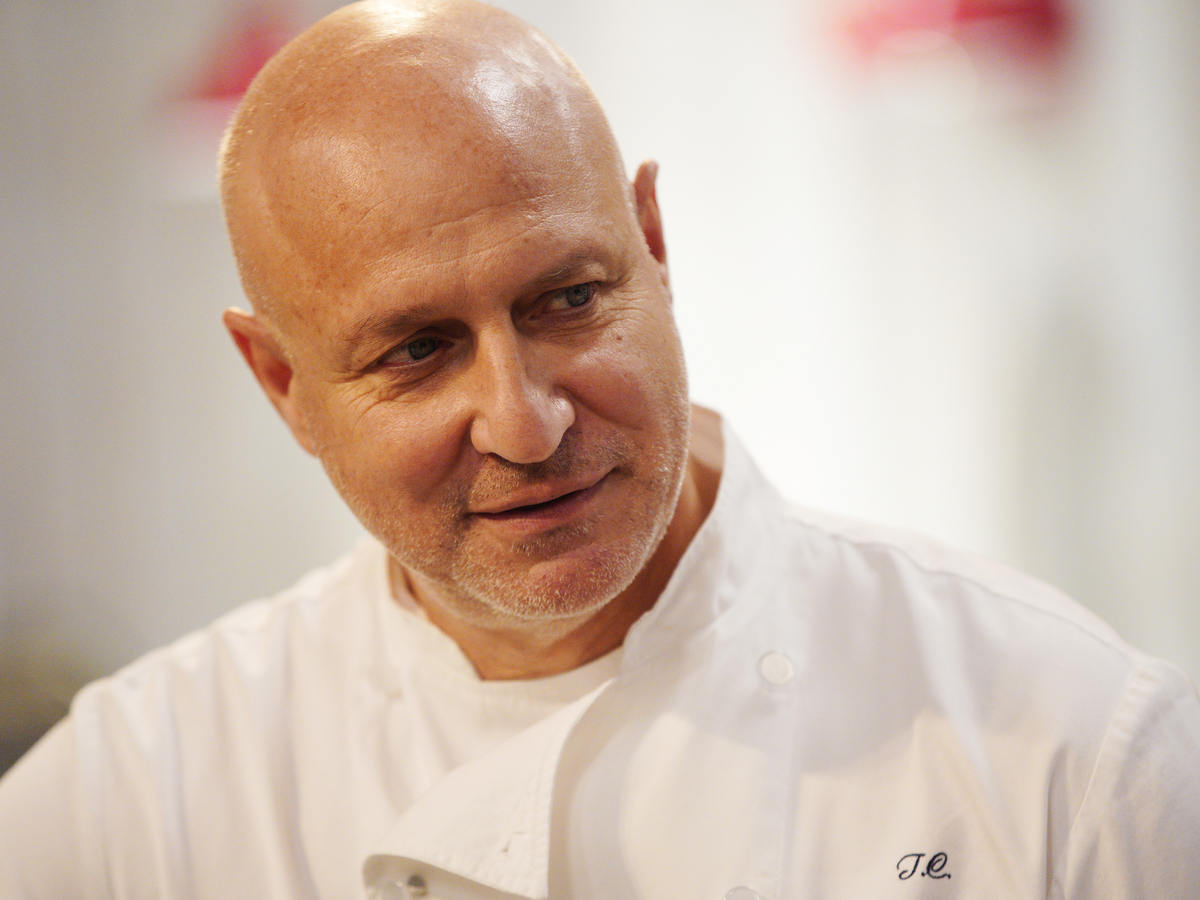 Tom Colicchio is a James Beard Award-winning chef and the lead judge on Bravo's Top Chef. Restaurants are "cultural centers" that provide a semblance of normalcy and connection in trying times, he says.

Chef Tom Colicchio is one of the many restaurateurs wondering what will be left of the industry after the COVID-19 pandemic has run its course.

Colicchio, who serves as head judge on the Bravo series Top Chef, laid off more than 400 staff members in the past few months. His five restaurants in New York and Los Angeles have been shuttered since March 14, and the two restaurants he's associated with in Las Vegas have closed as well. He says he's focused less on a timeline for reopening and more on what the "new normal" might look like while the country waits for a vaccine.

Colicchio is a longtime activist on issues related to the food supply chain, restaurants and hunger relief. He notes that most restaurants run on low margins and without large cash reserves. In response to the pandemic, he helped form the Independent Restaurant Coalition to lobby Congress for relief for the industry.

The coalition is "asking for a restaurant stabilization package," he says. "We are looking for income replacement that will go to cover employees, or pay suppliers, and sustain us through the losses that we're going to incur for the next at least eight months to a year."

Colicchio says restaurants are "cultural centers" that provide a semblance of normalcy and connection in trying times. He's particularly concerned about the smaller "mom and pop" establishments.

"We actually need to make sure those places that make us feel connected and part of a community are there for the long haul," he says. "We're really looking at saving every restaurant, because we think that every restaurant needs to be there."

Certain producers and certain distributors are set up to do certain things. So if you have a milk distributor that is set up to purchase milk from a dairy farm, and they are producing milk for, say, institutions — meaning college campuses and hotels — maybe they produce milk in a 5-gallon container that has a plastic bladder in it and it's set up to put in a dispenser. Those are all closed when schools closed and college campuses closed and hotels all closed down. Now, you have this distributor set up to do that. They can't turn on a dime and all of a sudden start putting milk into gallon and half-gallon containers. There's different labeling involved there. It's a different production line. So those dairy farmers that were selling into that market, they don't have a market anymore, and so they have to throw out their milk. It's not even a matter of taking it and shipping it to a different producer, because those other producers, they're at capacity. ...

Eggs, for instance. We're hearing stories about eggs that are just being cracked and thrown out. Again, there is a market and production in place that a lot of institutional feedings use — hospitals and schools and colleges and larger restaurant operations and hotel operations — that buy eggs already cracked, pasteurized in a gallon container. Well, that business is gone. So these eggs, there's nowhere for them to go. It's not a simple sort of thing to just change that production on a dime.

If you are a farmer and you're growing a pig, [you] want that pig to be 200 pounds because that's the way [your] production line can accommodate that pig and with various cuts that are a certain size. Now, all of a sudden that pig, it's 200 pounds and those slaughterhouses are closed. That pig has nowhere to go. And these farmers aren't manufacturers. They don't slaughter these animals. They just grow them and they put [them] on a truck and they bring them to the slaughterhouse. Now, all of a sudden that slaughterhouse is closed. What do they do with that animal? If they continue to feed it, it just gets too big — especially once it hits 200 pounds. It starts growing very quickly. No. 2, they're feeding this animal and there's nowhere to go. So there's a cost that they are incurring. They know they're not going to have a market for it. So they're killing these animals. Hopefully they're killing them as humanely as possible.

On food being wasted, despite the record number of people who are relying on food stamps and food banks

There should have been a way to move food around the country. There should be a plan for this. And see, this is the problem when you decide that you want to shrink government down, to the size that you could "drown it in a bathtub" — that's the old Grover Norquist line. All these years, we keep getting spoon-fed that big government's bad and we don't want big government; it's too intrusive and it gets in the way of our freedoms. But we don't want big government, we want smart government. Smart government that has plans in place when something like this happens. They know what to do. They don't deny it's happening. They don't sit there and pretend that somehow it's all going to go away. No, you have a plan to act. And so this is what we need to do.

On his plan to fix the distribution model and help restaurants, suppliers and people in need

We had a distribution set up. No one tapped into it. So instead of trying to actually create something new, you just kind of have to go with what you have. What we didn't have was the money flowing through the restaurants to do that. This is a pretty simple solution. And it works because you don't have to go around the system or create something new. You work within the system.

Could you imagine, if every restaurant was turned into a community feeding center where we don't have to do thousands of meals, every restaurant could do 200, 300, and then there's no choke point? It happens seamlessly, and that whole ecosystem of the restaurant — the employees, the suppliers — all of it stays intact. That would've been the best way to do it, and [to] feed a lot of hungry people at the same time.

On how he believes the government can do better

Bill Gates, Who Has Warned About Pandemics For Years, On The U.S. Response So Far

What's frustrating is hearing, "No one knew. No one knew this was going to happen." Yeah, plenty of people knew this was going to happen. Bill Gates talked about it two years ago in a documentary that was made. People have known this. I'm angry because ... this would protect restaurants, suppliers, employees. You know what it protects? It protects the country, and this is the kind of thing our government is supposed to do.

For too long, we've spent a lot of money on the military because the military was supposed to protect the country. The military can't protect against something like this. So we need to be smarter.

For too long, we've spent a lot of money on the military because the military was supposed to protect the country. The military can't protect against something like this. So we need to be smarter. We need it to say, you know what? There are things out there that are greater than a missile attack from another country. And we need to actually rethink the way America protects its citizenry, looking at a safety net that protects more people. ... We have to start thinking ahead. What does the new normal look like? What are the great ideas out there that can actually move this country forward? We have an opportunity now. And so we have to start thinking about, how do we envision, how do we protect our food supply, how to make it more resistant to what is going to happen again?

Lauren Krenzel and Mooj Zadie produced and edited the audio of this interview. Bridget Bentz, Molly Seavy-Nesper and Beth Novey adapted it for the Web.