Accessibility links
Still In Beta, Riot Games' 'Valorant' Is Buzzing Riot Games is known as the League of Legends studio — apart from some spinoffs, they've never done anything else. But now they're trying something new, a first-person shooter called Valorant. 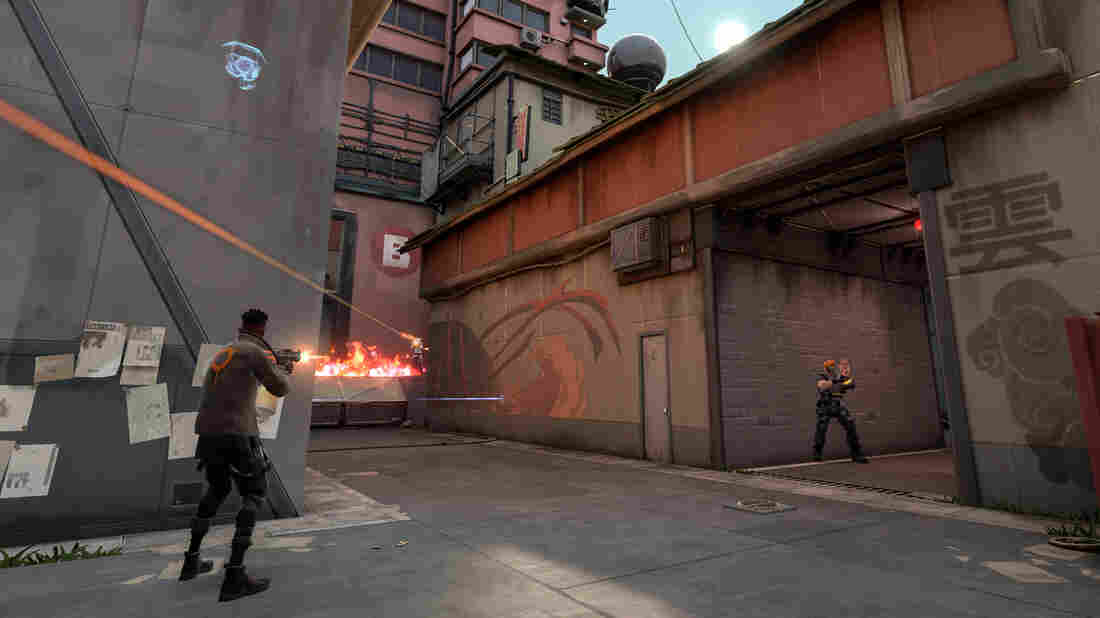 In Valorant, you mostly won't be jumping into direct confrontations — instead, you'll creep around corners to try landing a sneaky shot. Courtesy of Riot Games hide caption 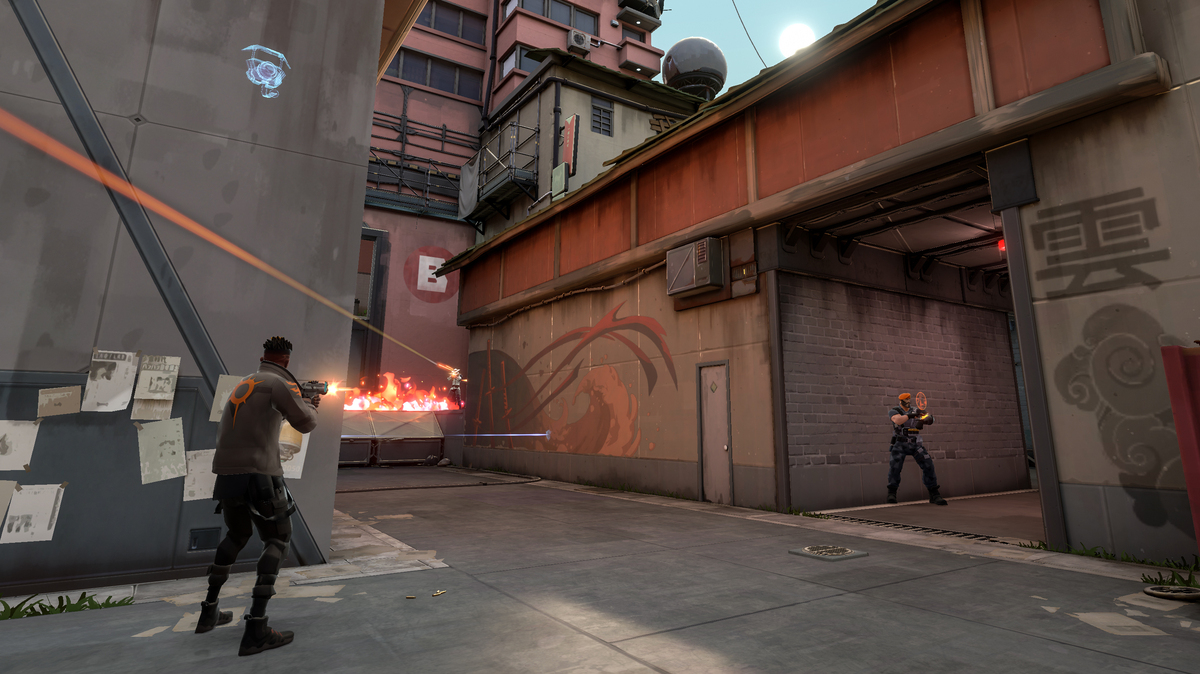 In Valorant, you mostly won't be jumping into direct confrontations — instead, you'll creep around corners to try landing a sneaky shot.

As long as Riot Games has been around, they've been the League of Legends studio. They didn't really need to do anything else — League is one of the most popular esports in the world. Tens of millions of people play every month, and millions also watch tournaments on the Twitch streaming service, and in stadiums, to see professional players compete against each other for millions of dollars in prizes.

Riot has released a few League spin-off games, but now they're venturing into completely new territory. Valorant, officially out this summer, is Riot's first non-League game, and its first first-person shooter.

It's a Frankenstein-y mashup of other popular games like Counter-Strike: Global Offensive and Overwatch, mixing the tactical, strategic nature of Counter-Strike with Overwatch's characters and unique special abilities.

With 'Valorant,' Riot is stepping up to compete with other top players in PC gaming, like Activision-Blizzard and Valve

With Valorant, Riot is stepping up to compete with other top players in PC gaming, like Activision-Blizzard and Valve. Activision-Blizzard's Overwatch has seen a decline in engagement, so it seems like the perfect time for Riot to cut in on that audience with a game that offers similar features.

So far, it's working. There's been an overwhelming amount of early interest in Valorant — it's already broken Twitch streaming records, and as of now, it's the most-watched game on the service. (As I'm writing this, Twitch has over 613,000 people watching Valorant streams. The next most popular category is "Just Chatting," with over 337,000 viewers.)

And here's the thing: Valorant is in what's called a closed beta test, so you have to follow very specific steps to have a chance at playing. Which makes those numbers even more striking.

That being said, it's not too hard to get access to the closed beta. You just need a Twitch account and a Riot account, and then you link those accounts together. Then, you have to watch a minimum of two hours of streams to be eligible for a key. Riot says access isn't guaranteed, but for most people, it seems to take a few hours.

This mandatory viewing definitely helps add to the streaming numbers. (And it didn't hurt that Riot Games partnered with gaming influencers to give them early access and help provide feedback.) But it's still an impressive amount of interest in an unreleased game, even one that's been out for almost a month in closed beta.

Once you get access, Counter-Strike players in particular will adapt to Valorant's gameplay more quickly than others. Both games have the same main goal: One team tries to plant a bomb in a designated area, and one team tries to stop them or diffuse the bomb.

Like many successful esports, 'Valorant' is easy to pick up and play with your friends, but difficult to master.

Like many successful esports, Valorant is easy to pick up and play with your friends, but difficult to master. Just like Counter-Strike, it requires a lot of precise shooting and strategic planning. It's a game of patience. You won't be jumping into direct confrontations unless it's absolutely necessary. Instead, you'll creep around corners to try landing a sneaky shot. (And the random people in the voice chat will be sure to express how unhappy they are with you if you don't follow the norms and rules. Voice chat can be turned off, thankfully, but in-game communication is a huge part of teamwork.)

Counter-Strike is all about pure skill — there's no element of luck. You won't see the best players in the world lose to a lousy shot like me just because I got lucky. And this is where Valorant goes beyond being just a Counter-Strike clone.

Like in Overwatch and Riot's own League of Legends, Valorant has unique characters (called agents) who have different ultimate abilities and special powers you can use during the game. But you need more skill to play Valorant than Overwatch. 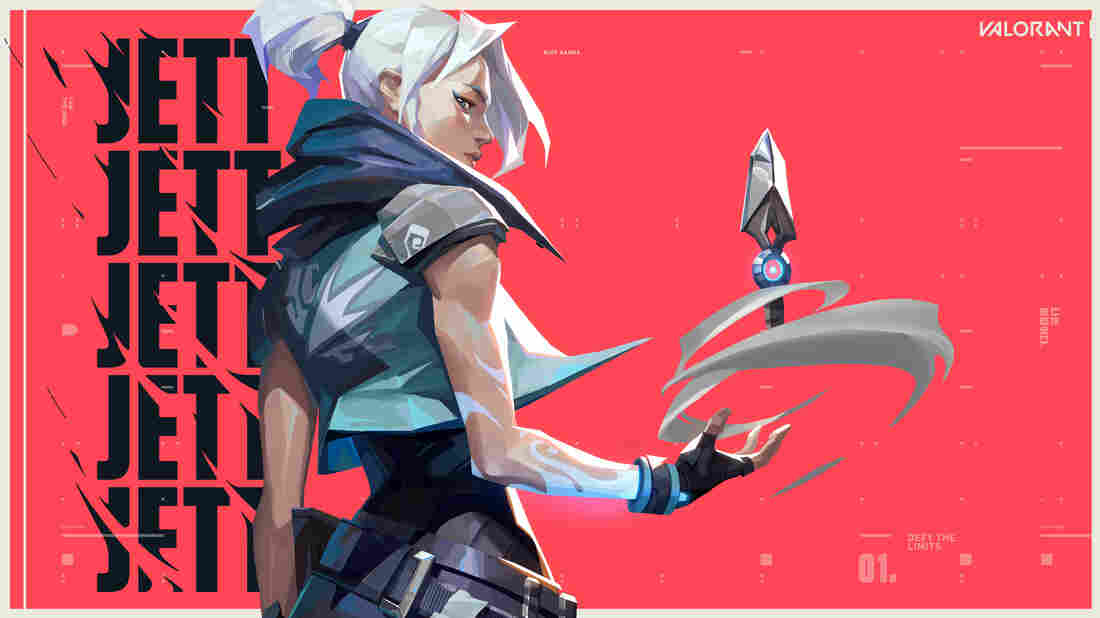 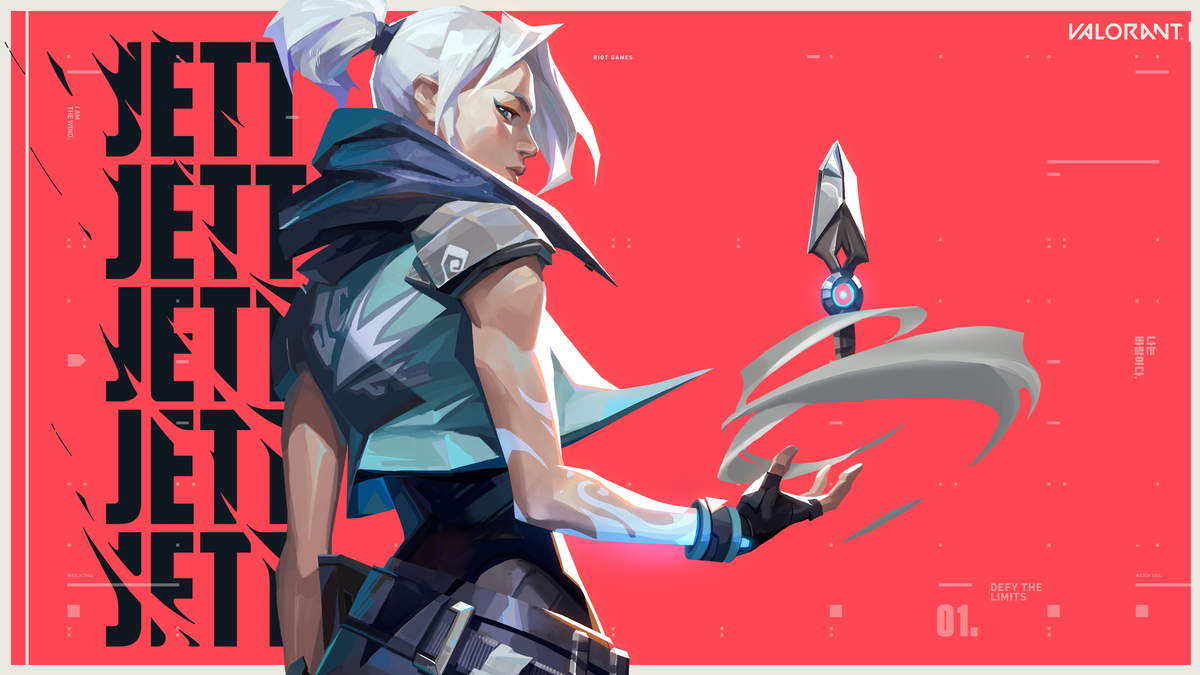 Valorant's playable characters, called agents, all have unique abilities. Among other things, Jett can cloud enemies' vision with fog.

Right now there are nine agents, including one who throws blinding flash bangs around corners, and another, an archer whose arrows can bounce off walls and reveal the location of opponents. The different powers mix up the gameplay and make things more visually interesting to watch, but still easy for viewers to keep up with.

My own experience playing Valorant improved a lot after Riot created a competitive mode, which ranks players based on their performance in placement games and matches them against similarly ranked players. Before competitive mode, there was no way to get matched with people around your own skill level. So as a complete noob, I found myself playing with people who'd been in over 100 matches. Then I got yelled at for not doing the right things.

Now, people who want to play competitively have a place to live, far away from me, which helps a little with managing toxicity. (But of course, Valorant is still an esport, which means I still avoid talking on the mic when I play by myself, because being a woman on voice chat inevitably brings sexist harassment that I am not in the mood to deal with.)

There are a few things I hope Riot addresses before Valorant officially hits the shelves. It needs more options for fast, casual play, the kind offered by Counter-Strike and Overwatch. Right now you're only able to play long rounds that typically last 30 minutes or longer.

Ready (To Make Money) Player One: The Business Of Esports

Ready (To Make Money) Player One: The Business Of Esports

And multi-player needs work; if one of your teammates disconnects in the middle of a match, they can't be replaced. You're stuck facing a full team of five with only four players, a huge disadvantage, even though the game will give you extra cash to buy compensatory weapons at the end of every round.

Though once again, this is an incomplete game still in beta. I have hope that Riot will address these issues; they have been releasing constant updates that incorporate user feedback from places like Discord and Reddit, and for an incomplete game, Valorant runs surprisingly smoothly.

So will it become the next League of Legends? The company created its own League of Legends esports league but hasn't announced anything similar for Valorant yet — though they are offering help to people that want to host their own tournaments, releasing guidelines for tournament organizers. Riot definitely has the money to back up a huge tournament circuit, and people are expecting a lot from them due to the success of League.

In a statement, Riot's senior director of global esports Whalen Rozelle said the company wants to let Valorant grow naturally. "We're not looking to force anything too quickly without knowing what's best for esports fans. As such, a primary focus early on will be forming partnerships with players, content creators, tournament organizers, and developers.

So far, Riot's efforts seem to be successful. Some professional Counter-Strike and Overwatch players have already jumped over to playing Valorant full time, which means you've got some really impressive players to entertain you while you're watching your mandatory two hours-plus of streaming.

For now, Valorant is just in closed beta; only time will tell if it manages to stick around beyond the pre-release hype. But from what I've seen so far, I think it has a good chance.

Kaity Kline is a columnist for NPR's Join the Game and a producer on 1A. She is a native of New Jersey, a lifelong gamer, and a former gaming YouTuber. She tweets at @kaitykline.