Accessibility links
Seen 'Plandemic'? We Take A Close Look At The Viral Conspiracy Video's Claims The video has been viewed millions of times on YouTube via links that are replaced as quickly as the video-sharing service can remove them for violating its policy against "COVID-19 misinformation."

A slickly produced 26-minute video called Plandemic has exploded on social media in recent days, claiming to present a view of COVID-19 that differs from the "official" narrative.

The video has been viewed millions of times on YouTube via links that are replaced as quickly as the video-sharing service can remove them for violating its policy against "COVID-19 misinformation."

In it, filmmaker Mikki Willis conducts an uncritical interview with Judy Mikovits, who he says has been called "one of the most accomplished scientists of her generation."

Never heard of her? You're not alone.

Two prominent scientists with backgrounds in AIDS research and infectious diseases, who asked not to be identified over concerns of facing a backlash on social media, told NPR that they did not know who she was.

If you were aware of Mikovits before this week, it is probably for two books she published with co-author Kent Heckenlively, one in 2017 and another last month. Heckenlively has also written a book himself espousing the discredited link between autism and the vaccines. You might also know Mikovits for her central role in a pair of scientific controversies. One involves a paper she co-authored in 2009 that was published in the journal Science, and the other concerns allegations that she stole notebooks and a laptop from a laboratory.

In the 2009 paper, Mikovits is among 13 researchers who claimed to have found that a mouse retrovirus may contribute to chronic fatigue syndrome.

In the video, filmmaker Willis says the paper "sent shock waves through the scientific community, as it revealed the common use of animal and human fetal tissues were unleashing devastating plagues of chronic diseases."

However, two years after its publication, the paper was retracted by the authors, an unusual occurrence in a peer-reviewed scientific journal. Science wrote at the time that "multiple laboratories, including those of the original authors, have failed to reliably detect" the mouse retrovirus in chronic fatigue syndrome patients. "In addition, there is evidence of poor quality control in a number of specific experiments in the Report." 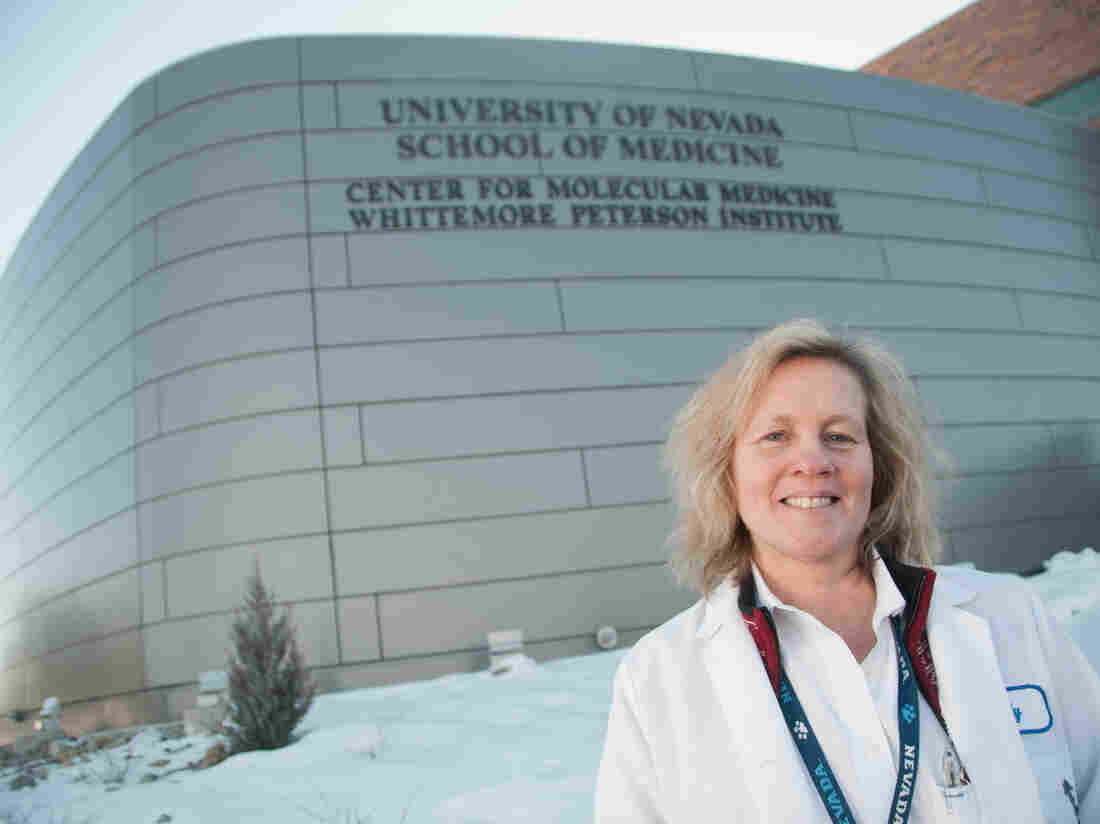 In 2011, Judy Mikovits was fired from the Whittemore Peterson Institute for Neuro-Immune Disease, in Reno, Nev. She was then accused of stealing notebooks and a computer. David Calvert/AP hide caption 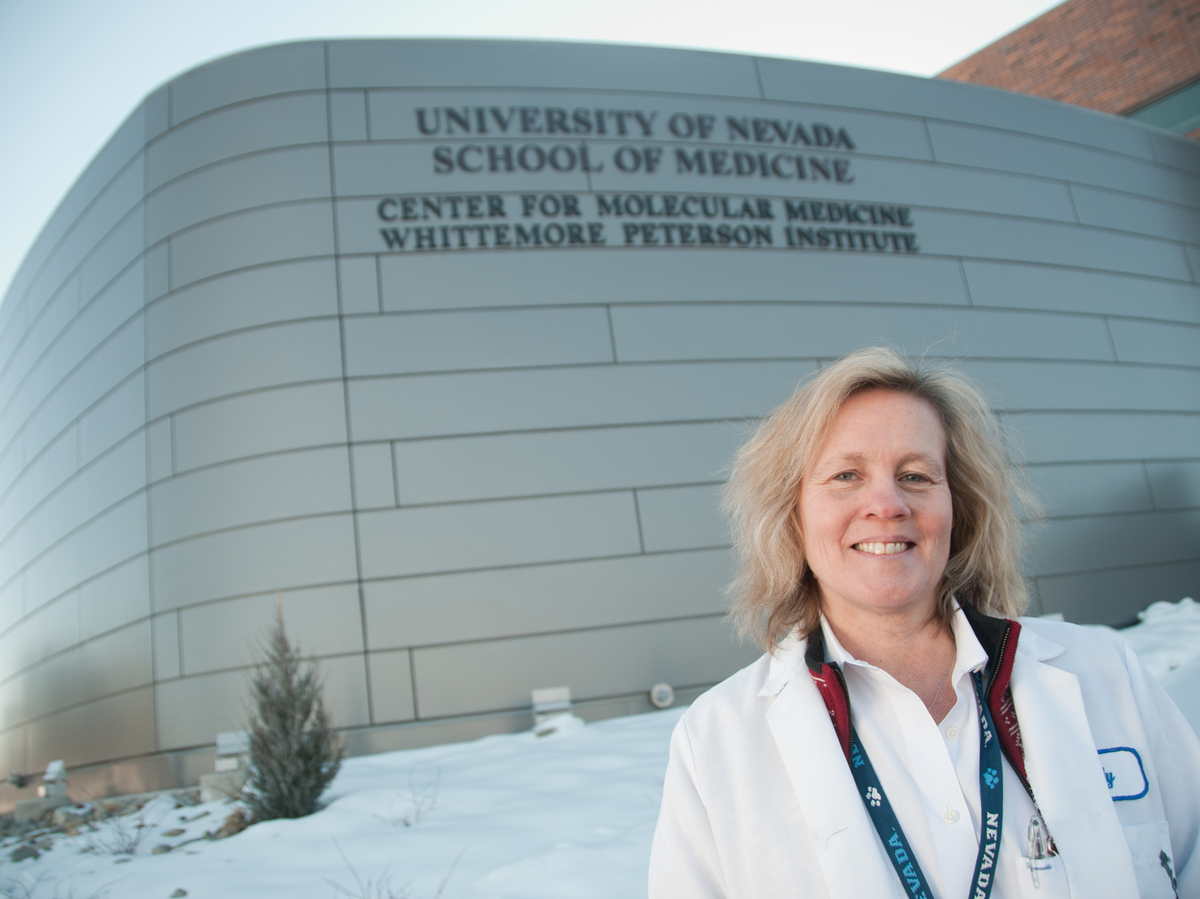 In 2011, Judy Mikovits was fired from the Whittemore Peterson Institute for Neuro-Immune Disease, in Reno, Nev. She was then accused of stealing notebooks and a computer.

The second controversy came the same year the paper was retracted and involved Mikovits being fired from Whittemore Peterson Institute, a laboratory located on the University of Nevada campus in Reno, where she was research director.

The lab claimed that she "wrongfully removed lab notebooks and other proprietary information," according to a contemporaneous report by KRNV TV in Reno.

In Plandemic, Mikovits relates her arrest over the incident, saying she was "held in jail without charges. I was called a 'fugitive from justice.' "

Speaking as footage of what appears to be a police SWAT team executing a nighttime raid plays over her words, she says: "No warrant. They literally drug me out of the house. Our neighbors are looking at what's going on here."

According to the Chicago Tribune, Mikovits was arrested in California as a fugitive on a warrant issued by police from the University of Nevada, Reno.

Days later, according to KRNV, she turned herself in to authorities in Reno. The television station's report makes clear that a two-count criminal complaint was filed against her — for possession of stolen property and for unlawfully taking computer data and equipment. Both are felonies.

"Mikovits' lawyer, Scott Freeman, says his client is baffled at the criminal charges filed against her," the news report says.

She claims in the video that the material she was accused of stealing was "planted" in her house.

Although the criminal charges were later dropped, the lab where she worked subsequently won a default judgment in a civil suit against her seeking the return of the items. The case was bolstered in part by a colleague at the institute (and a co-author on the retracted study) who admitted in an affidavit that he had taken items from the lab on behalf of Mikovits.

NPR reached out to Whittemore Peterson Institute for comment, but received no reply.

Ironically, Mikovits was a co-author on the study viewed as the final nail in that 2009 study she took part in. In an email to Science Insider, she wrote that it was the only work she could find after her professional and legal woes.

Many of Mikovits' claims concern perceived professional slights or conflicts that she attributes to various high-profile individuals who have become even more prominent in recent weeks because of the COVID-19 pandemic.

In an article originally published in 2018, Snopes reported on a claim by Mikovits that Fauci sent an email that "threatened her with arrest if she visited the National Institutes of Health to participate in a study to validate her chronic fatigue research."

"I have no idea what she is talking about. I can categorically state that I have never sent such an e-mail," Fauci told the fact-checking website. "I would never make such a statement in an e-mail that anyone 'would be immediately arrested' if they stepped foot on NIH property."

Profiting from patents and COVID-19 payments?

Mikovits also says Fauci has profited from patents bearing his name that were derived from research done at NIAID. While the details of her claims are hard to pin down, The Associated Press did report in 2005 that scientists at the National Institutes of Health "have collected millions of dollars in royalties for experimental treatments without having to tell patients testing the treatments that the researchers' had a financial connection."

Fauci and his deputy, Clifford Lane, were among those who received royalty payments from patents at NIH. Fauci later told The BMJ, a peer-reviewed medical journal, that as a government employee, he was required by law to put his name on the patent.

According to BMJ, Fauci "said that he felt it was inappropriate to receive payment and donated the entire amount to charity."

Mikovits also appears to cast doubt on the official statistics regarding COVID-19 deaths, saying that doctors and hospitals have been "incentivized" to count deaths unrelated to the disease as having been caused by the coronavirus infection because of payouts from Medicare.

In fact, a 20% premium was tacked on to Medicare payments for treatment of COVID-19 patients as part of the recent Coronavirus Aid, Relief and Economic Security Act.

However, a fact check published recently in USA Today concluded: "There have been no public reports that hospitals are exaggerating COVID-19 numbers to receive higher Medicare payments."

The 'out of lab' theory

In the video, Mikovits is asked whether she believes the novel coronavirus came out of a lab — something that NPR's Geoff Brumfiel and Emily Kwong have thoroughly investigated and found that the vast majority of scientists in the field of infectious diseases dismiss the idea that a lab created the virus or accidentally released it. President Trump and other senior administration officials have pushed the accidental release theory without presenting evidence.

"I wouldn't use the word 'created,' " Mikovits says in the video. "But you can't say 'naturally occurring' if it was by way of the laboratory."

Asked where the alleged lab-release occurred, Mikovits asserts that she's "sure" it happened "between" unspecified North Carolina laboratories, the U.S. Army Medical Research Institute of Infectious Diseases at Fort Detrick in Maryland, and the Wuhan Institute of Virology in China.

Again, there is no publicly available evidence to support her claim.

The video correctly points to U.S. cooperation with and funding for the Wuhan laboratory but implies by way of innuendo that the link is sinister in nature rather than standard international cooperation. In fact, as NPR's Nurith Aizenman has reported, "many experts say [such cooperation] is vital to preventing the next major coronavirus outbreak."

Mikovits also says it's not possible for the coronavirus, formally known as SARS-CoV-2, to have evolved from the original severe acute respiratory syndrome virus, stating that "would take it up to 800 years to occur."

Her statement belies the fact that viruses are well-known to evolve rapidly, with the seasonal flu strain, for instance, changing so quickly that a new vaccine is required each year. In a 2012 study of one virus, researchers at Michigan State University found that if its normal route for infection was blocked, it only took a matter of weeks for it to evolve another one.

Mikovits also claims to have worked at the Fort Detrick's USAMRIID in 1999, where she says her job "was to teach Ebola how to infect human cells without killing them."

"Ebola couldn't infect human cells until we took it into the laboratories and taught [it]," she states.

While NPR could not verify Mikovits' claims to have worked at the lab nor the nature of the work she might have done there, her statements simply don't pass the sniff test. If, in 1999, her research was aimed at getting Ebola to infect humans, she was behind the curve — by decades.

The first Ebola outbreak occurred in 1976 in central Africa, killing 280 people. Between 1976 and 1999, there were several more such outbreaks that killed hundreds of people.

Clearly, Ebola was able to infect humans long before 1999.

In addition to Heckenlively, her book collaborator, Mikovits has made spurious claims about vaccines, although she insists in the video that she is not "anti-vaccination." As recently as July, she spoke before a group opposed to a California bill aimed at clamping down on exemptions to vaccinations in children.

Finally, a number of individuals described as doctors in the video are seen questioning the guidelines put out by the Centers for Disease Control and Prevention on social distancing and other preventative measures, or suggesting the same profit motive for COVID-19 diagnoses that Mikovits promotes.

Although none are identified by name, one appears on a television chyron to be Minnesota state Sen. Scott Jensen, a family physician from Chaska.

On Thursday, Jensen said he had "taken a ton of heat and even some threatening messages" over his stance, particularly since Plandemic has gone viral. But he said he stands by his criticisms of the government response to the pandemic.

Two others who appear in the video — identified as California urgent care clinic doctors — called last month for an end to stay-at-home orders. They have since been rebuked by two national physicians groups.

"The American College of Emergency Physicians (ACEP) and the American Academy of Emergency Medicine (AAEM) jointly and emphatically condemn the recent opinions released by Dr. Daniel Erickson and Dr. Artin Massihi. These reckless and untested musings do not speak for medical societies and are inconsistent with current science and epidemiology regarding COVID-19," a statement said.

The groups added: "As owners of local urgent care clinics, it appears these two individuals are releasing biased, non-peer-reviewed data to advance their personal financial interests without regard for the public's health."

A previous version of this story suggested Mikovits might be referring to a state laboratory in North Carolina. In fact, she referred to unspecified "North Carolina laboratories."