Accessibility links
Golf Is One Of Many Sports Charting How To Come Back During Coronavirus Pandemic As golf courses around the country begin to reopen during the coronavirus pandemic, golfers now find a new normal. Social distancing and other changes are part of a different game. 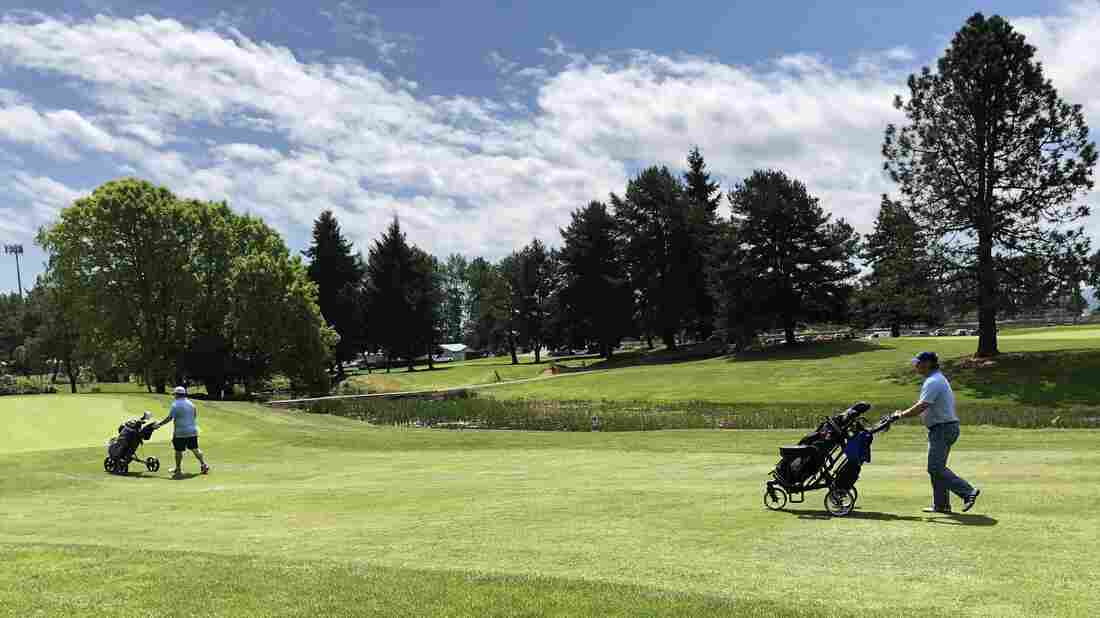 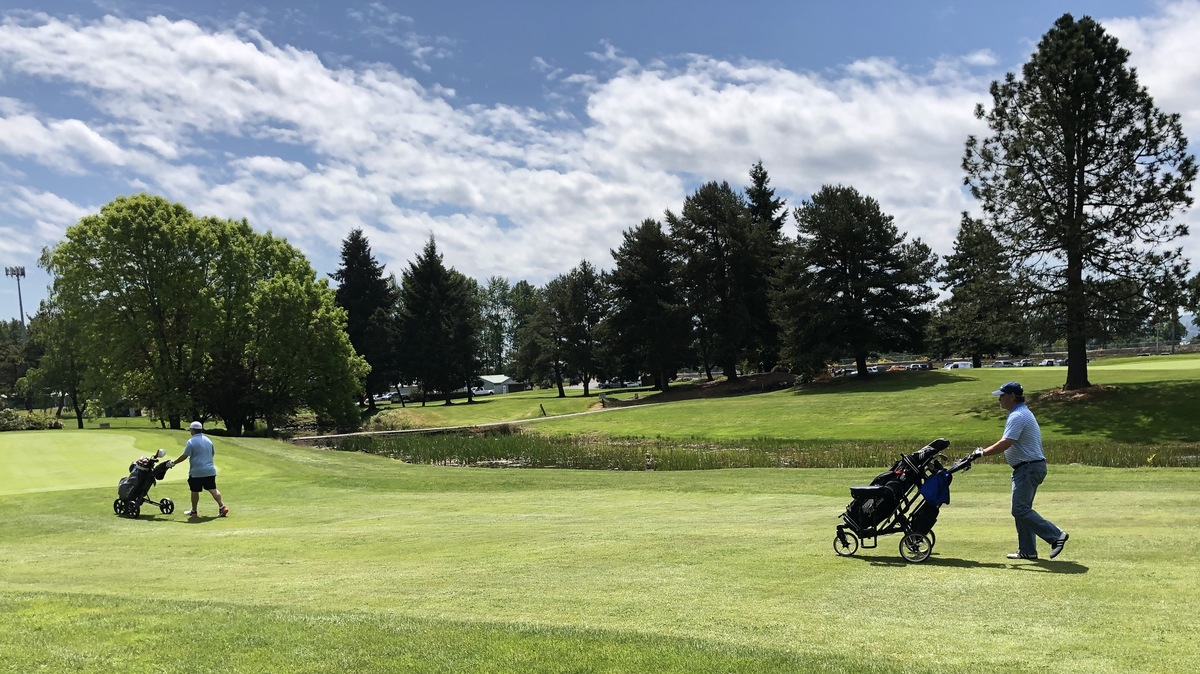 As communities start to emerge from COVID-19 shutdowns, so do recreational opportunities.

Golf seems to be a natural for these times, with its built-in social distancing. Still, as courses around the country reopen, there are many new restrictions. Thursday, Massachusetts became the last state to bring back golf, with rules that prohibit caddies and golf carts and requirements that golfers stay in their car until 15 minutes before their tee time and have to return to their car right after they finish the round.

Washington state ended its golf shutdown earlier this week, hoping golfers comply with the new rules, whether they like them or not.

A new kind of problem

Reopening day was near perfect at Three Rivers Golf Course in the southwest Washington city of Kelso. Blue sky. An occasional puff of wind. Manicured fairways and greens. The kind of day that had golfers pining for their beloved sport since it shut down March 23 as part of Washington's stay-at-home order.

But amid the classic conditions, there was a new kind of problem.

Peering out the window of the Three Rivers pro shop, course general manager Lance Satcher picked up the microphone he normally uses to call players to the first tee.

"They're going to get upset about it," Satcher said, "but that's the rules. They don't want people congregating around here. We have a lot of guys who do nothing but come out and just practice hitting balls and chip and putt for hours. And they just can't do it anymore."

As Satcher spoke, his pro shop assistant Randy Wright came out from behind the front desk carrying a spray bottle of cleaner. 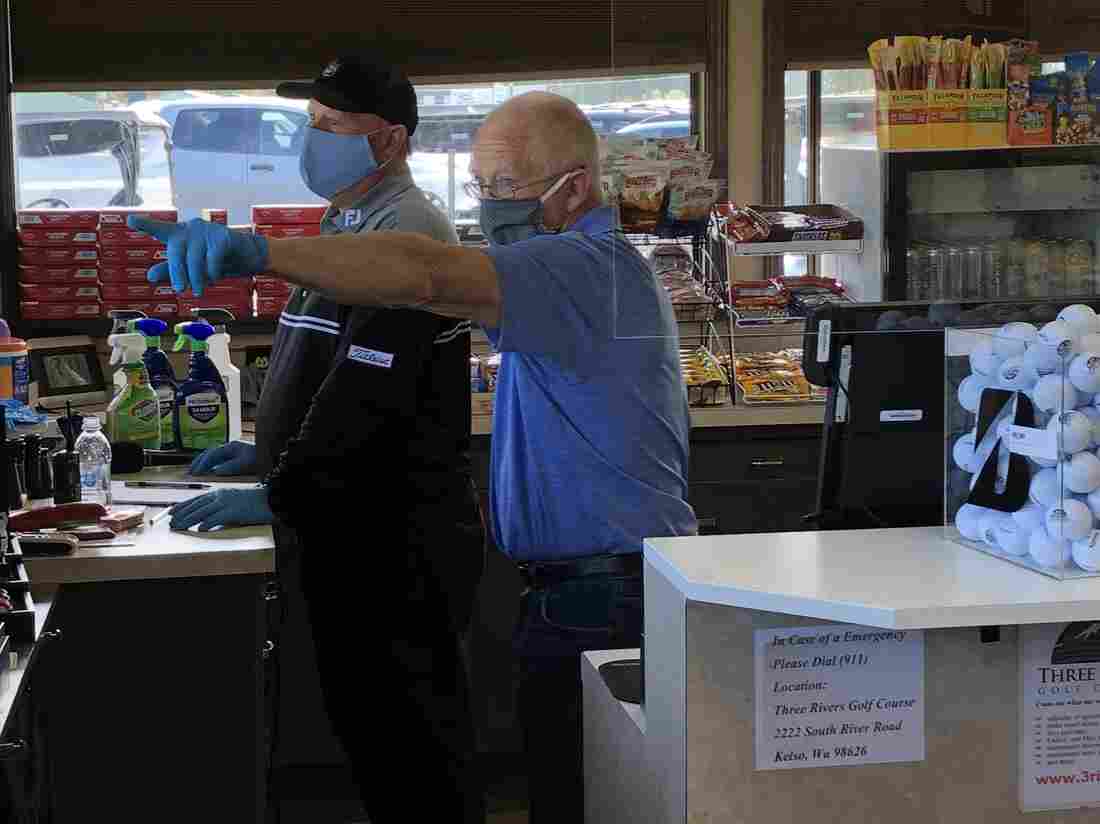 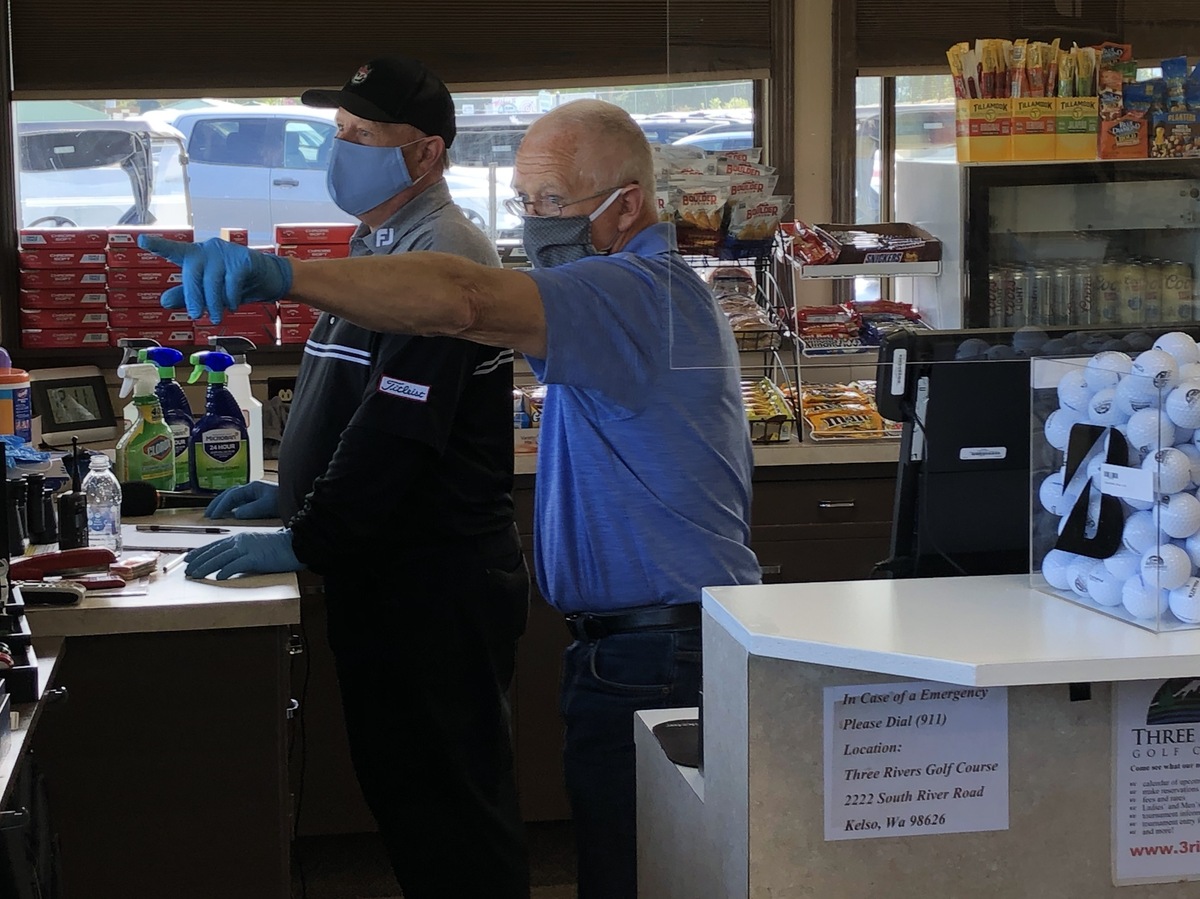 What's going on is real

Golf is known for its rules, perhaps too many and arcane.

But now there's a new layer of regulation with much more serious intent. Washington's governor sent out a list of about 20 reopening restrictions and guidelines for the state's more than 275 golf courses.

Satcher, who closed Three Rivers a week before it was required, is fully on board.

Golf Reshuffles Its Schedule: All 4 Majors Canceled Or Postponed

So, at Three Rivers, it's now a different experience.

Some restrictions are mandated; others are up to course operators.

Usually there's one marshal, roaming the grounds in a golf cart. Three Rivers added a second, stationed on the first tee with a clipboard.

"I need to get some contact information. What's your name?" marshal Matt Bradley asked a golfer about to tee off. "What's your phone number?"

Bradley logs every golfer's information for potential contact tracing if someone tests positive for the virus.

It's still golf, in all its maddening glory

All these elements of new golf seem strange. But when it's time to pull out a club, the sport still is the same.

In all its glory, and agony.

"Well not very far, not very straight, but it'll play," Dave Mansius sighed as he watched his first tee drive. Mansius is from Vancouver, Wash. Moments before his tee shot, he said the last time he played was late February.

"We're excited to be out here today, let me tell you," Mansius said.

As he and his playing partner started their round, Kathy Dibblee from Castle Rock was finishing hers on the nearby 18th green.

"Just being able to get out and swing the clubs feels good," Dibblee said, adding, "I mean, there were a couple of swings [where I said] where did that come from? And other ones just yeah, that felt good! I can do this!"

Dibblee said she's glad the state finally lifted the ban, giving her a chance to get some exercise. And she said she and her playing partner stuck to the new set of rules.

"The lady I was golfing with," she said, "we never got super close. No high-fives. None of that. We were just socializing as far as just talking, which was nice. Because you don't get to see these people very often."

And, having been without golf, following the rules was that much easier.

"We don't want to be that rebel and just do what we want to do," Dibblee said, "and then all of a sudden because people broke the rules we don't get to play again."

Complying with the new, stricter rules should be a national goal, according to Erik Matuszewski. He's the editorial director of the National Golf Foundation, the sport's biggest business research company in the United States.

"You really want to make sure they understand that this is an opportunity," Matuszewski said about the country's golfers playing through the pandemic. "They're going to be playing before, perhaps, the biggest gallery of their lives, you know? People are going to be watching to see if golf can do this the right way."

Lance Satcher in Kelso certainly hopes so. Especially as he tries to bring his business back.

Before this week, Three Rivers hadn't made any money since mid-March. He had to lay off about a dozen employees. To come back and fully rehire and make the business viable means every golfer on every course in the state has to comply.

"If [Washington Gov. Jay Inslee] starts seeing spikes [in COVID-19 cases], he's going to pull back again on it," said Satcher, "and the last thing we want to do is be out of business."

The pandemic forced several Washington courses to close for good. The rest are trying to keep that number low, one socially distancing twosome at a time.