Accessibility links
Bill Buford Is Able To Offer An Authentic Adventure In French Cooking In 'Dirt' As a longtime Paris resident, at first I feared Dirt might be yet another expat tale of moving to France en famille, with all its tedious clichés. I should have known better. 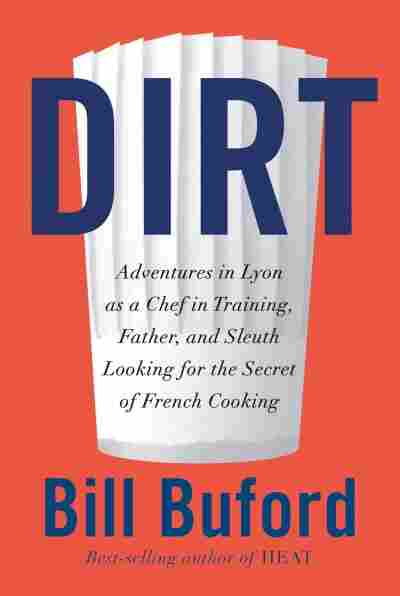 Adventures in Lyon as a Chef in Training, Father, and Sleuth Looking for the Origins of French Cooking

Title
Dirt
Subtitle
Adventures in Lyon as a Chef in Training, Father, and Sleuth Looking for the Origins of French Cooking
Author
Bill Buford

Being in lockdown in Paris during the coronavirus pandemic turned out to be the perfect time and place to devour Bill Buford's new book Dirt.

Dirt: Adventures in Lyon as a Chef in Training, Father, and Sleuth Looking for the Secret of French Cooking was just the antidote to confining apartment walls and the daily tedium of my own pedestrian meals.

I've lived in Paris for 16 years and I've never read Buford. So I first feared Dirt might be yet another expat tale of moving to France en famille, with all its tedious clichés.

I should have known better. Buford is a longtime fiction editor at The New Yorker magazine and author of Heat, a best-selling depiction of the city's restaurant scene. He is knowledgeable, quick and funny — and Dirt is a work of cultural, historical and gastronomical depth that reads like an action memoir.

Buford's quest to understand French cuisine takes him to Lyon, which is called the gastronomic capital of the world. Lyon is a city that creates chefs, says Buford, and he thinks he knows why: Everything the Lyonnais eat is grown right around them. "Lyon finds itself among vineyards and rivers and mountain lakes, among birds and pigs and fish," he writes.

But more importantly, says Buford, it's because it's a place where everyone shares the belief that "what happens at the table is among the most important activities in civilization. It is about intimacy, convivium, creativity, appetites, desire, euphoria, culture, and the joys of being alive."

In Lyon, Buford dives right in. Living in France makes me appreciate how deeply he went. Buford's relentless quest to understand the secrets of French cooking has him seeking out people and devouring experiences.

From his perch as an intern in the kitchen at the iconic La Mère Brazier, we experience the high-pressure atmosphere of a Michelin-starred restaurant, which is both amazing and frightening.

The kitchen can be a brutal world of daily bullying and humiliations. Take Mathieu, a 15-year-old aspiring chef who arrives eager for his internship. "He was like a petri dish of the workplace's toxins," writes Buford. "He had arrived innocent, got roundly abused, and was now trying to find his place as an abuser."

Then there is the shy Hortense, the only woman in the kitchen. She's subjected to the kind of harassment and jokes one can only imagine in a macho, French kitchen of the pre-#metoo era. But Hortense, like everyone else, has to suck it up and show rigueur for the good of the kitchen. And the axiom "What goes on in the kitchen stays there" prevails above all.

But there's a lot more to Dirt than tales of kitchen struggles. Discovering what goes into preparing cuisine at this level and scale is fascinating.

You might be in lockdown opening a can of beans, but with Buford you'll be cooking dishes like poulet en vessie — chicken cooked inside a pig's bladder stuffed with truffles, fois gras and cognac.

You'll slaughter a pig to learn how to make the boudin noir or blood sausage the Lyonnais (and all French) love. Doesn't tempt you? Well, the sauces will. In France there's a sauce for every dish, and Buford tries his hand at them all. He writes:

"The result was like an edible liquid expression of purple velvet, sweet because of the port and faintly meaty... the shallots and the mustard added sharpness but the sauce also had a textural quality that I hadn't expected, like a fabric..."

If you aren't interested in France or Europe or food, this book may not be for you, as it is incredibly detailed and focused on these topics. But if you are, it's a feast.

We meet the cast of characters central to Buford's culinary and cultural education: the chefs — including the Pope of French cuisine, Paul Bocuse — and the simple boulanger, Bob, who owns the bakery below his apartment and with whom Buford does his first culinary internship.

Buford obsesses over the intersecting currents of French and Italian culinary history. He pours over cookbooks: La Varenne's 1651 Le Cuisinier François, but also worn, family recipe books picked up at flea markets. "I coveted stained, used, filthy ones," he says, "and found an almost addictive pleasure in flipping through pages that had been studied, in some cases, more than a century before."

Buford describes one recipe book as "a seventy year conversation between a grandmother, a mother and a daughter, until finally it was swept out in an estate-clearing auction of whatnots and ended up on eBay."

He called another collection of recipes "radiant and sad and beautiful." It was put together on "sheets of another era's thin paper," by a French soldier captured by the Nazis when they invaded France in 1940. The prisoner of war painstakingly details the recipes for his nation's most beloved dishes — a cassoulet from the southwest; a cervelas de Strasbourg from Alsace. Buford senses his urgency in case these should be lost. "It needs to be preserved, like civility, like dignity, like the table, like a shelter that protects us from the ugliness just outside our front door — the crudeness, cruelty, selfishness, the incomprehensible injustice."

That soldier, says Buford, recognized that cuisine "protects us in our humanity."

Buford's months-long stay in Lyon turns into five years — time enough to answer most of his questions, and for his insights to ripen. He even masters the poulet en vessie. But he stays so long he fears his sons may never speak perfect English! And that's when he realizes it's time to go.

But I am glad Buford stayed as long as he did. I feel he truly took me to the heart of French cuisine.