Accessibility links
Little Richard, The 'King And Queen' Of Rock And Roll, Dead At 87 Little Richard was an explosive performer who inspired generations of musicians from Otis Redding to The Beatles to David Bowie. He died Saturday morning. 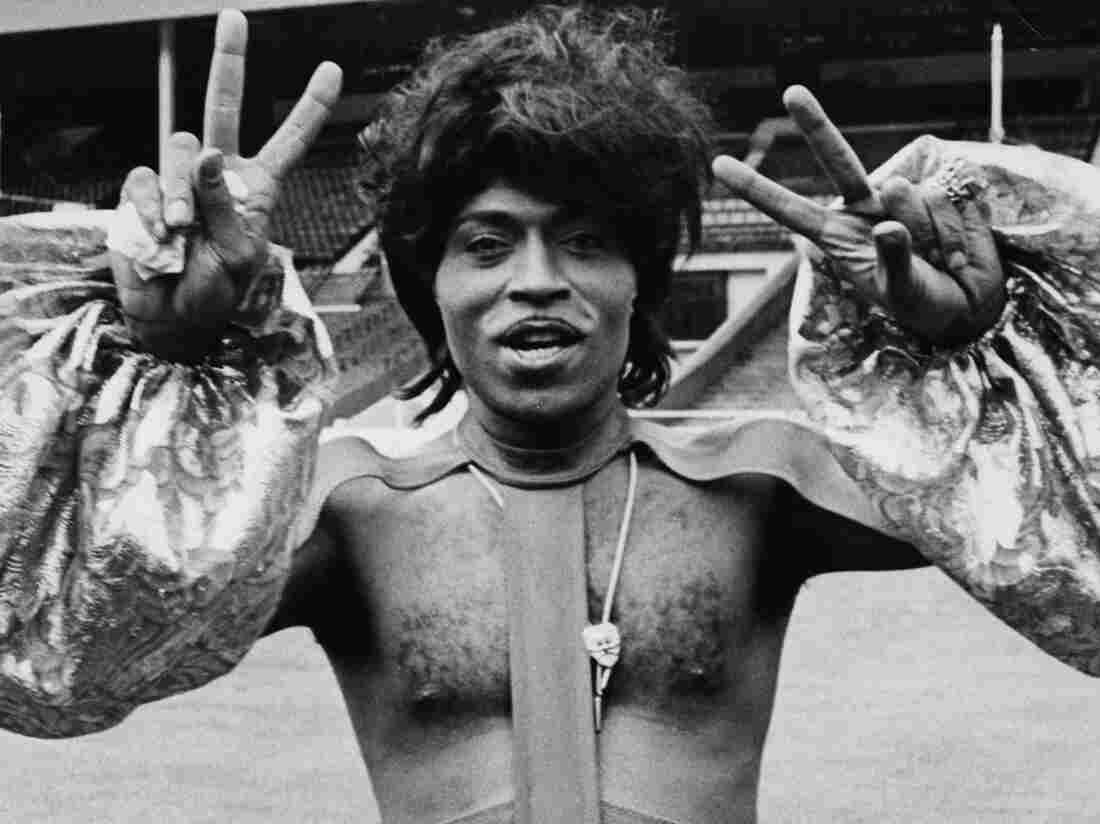 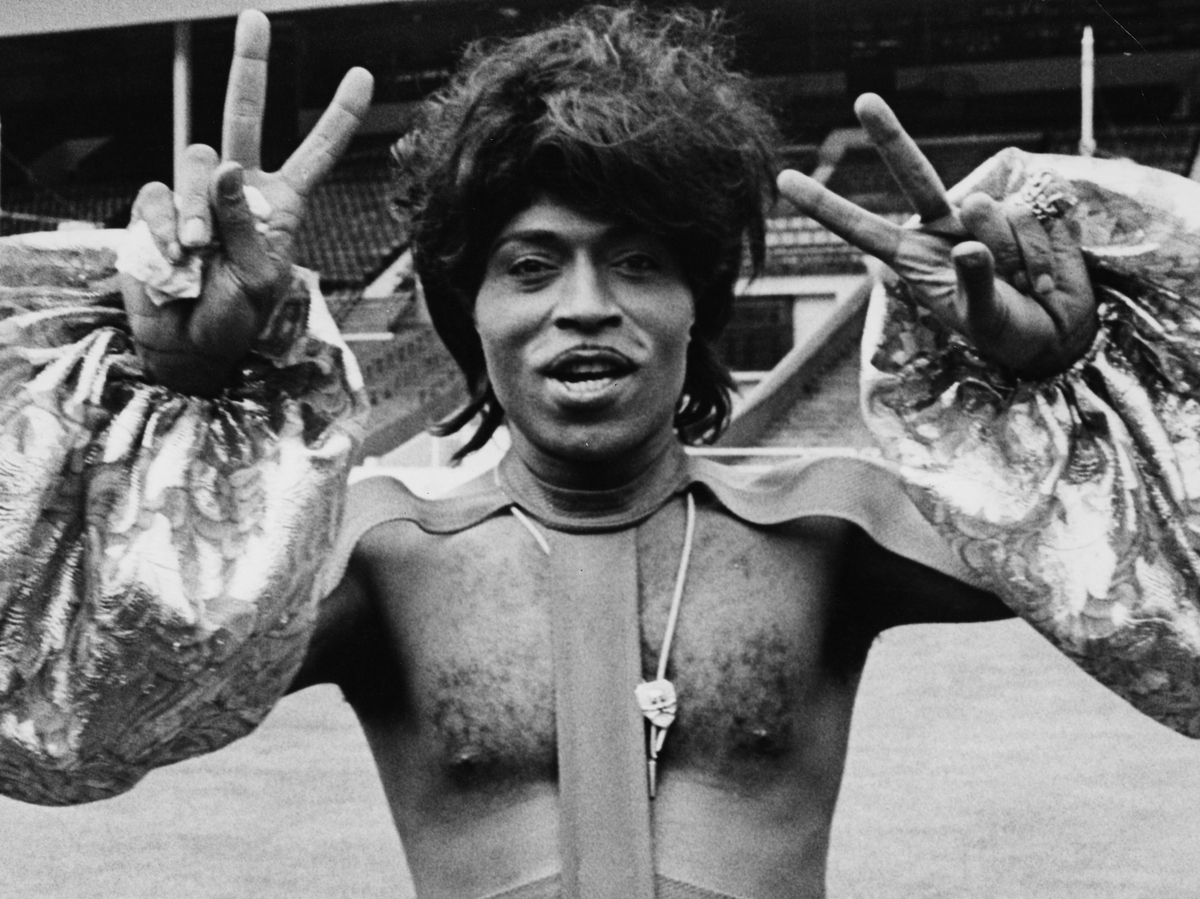 Little Richard, the self-described "king and queen" of rock and roll and an outsize influence on everyone from David Bowie to Prince, died Saturday in Tullahoma, Tenn. He was 87 years old.

Bill Sobel, a lawyer for Little Richard, tells NPR that the cause of death was bone cancer. Rolling Stone was the first to report on Little Richard's death.

With his ferocious piano playing, growling and gospel-strong vocals, pancake makeup and outlandish costumes, Little Richard tore down barriers starting in the 1950s. That is no small feat for any artist — let alone a black, openly gay man who grew up in the South.

He was a force of nature who outlived many of the musicians he inspired, from Otis Redding to the late Prince and Michael Jackson. His peers James Brown and Otis Redding idolized him. Jimi Hendrix, who once played in Little Richard's band, said he wanted his guitar to sound like Richard's voice. The late David Bowie was 9 years old when he first saw Little Richard in a movie. "If it hadn't have been for him, I probably wouldn't have gone into music," Bowie told Performing Songwriter magazine in 2003.

Bob Dylan took to Twitter on Saturday to remember Little Richard, writing "He was my shining star and guiding light back when I was only a little boy. His was the original spirit that moved me to do everything I would do."

I just heard the news about Little Richard and I’m so grieved. He was my shining star and guiding light back when I was only a little boy. His was the original spirit that moved me to do everything I would do.

In his presence he was always the same Little Richard that I first heard and was awed by growing up and I always was the same little boy. Of course he’ll live forever. But it’s like a part of your life is gone.

Little Richard was an audacious showman in everything he did: movies like Down and Out In Beverly Hills, music for children and commercials. But above all, he was a pioneer of rock and roll, mixing gospel, country, vaudeville and blues into something all his own.

Little Richard was born Richard Wayne Penniman on Dec. 5, 1932, in Macon, Ga. He was one of 12 siblings. His father was a brick mason, a bootlegger and eventually a nightclub owner. When Richard was 19, his father was shot to death outside of his club: Charles Penniman died on Feb. 15, 1952.

"A lot of mud and a lot of cows and a lot of chickens and a lot of pigs," he recalled. "It was a beautiful place and I was singing all up and down the street loud as I can. Everybody hollering out there, 'Shut up! Shut up! You're making too much noise!' But I was singing 'Tutti Frutti' even then. And playing 'Lucille' at the piano at that time."

To develop his style, Little Richard borrowed a few things from the performers he admired, like a singer and pianist who went by the name of Esquerita. Esquerita was openly gay, and he wore make-up and loud clothing. He also taught Little Richard to play the piano.

Then there was gospel singer Marion Williams, from whom Little Richard said he got his trademark whoop.

Charles White, the author of an authorized biography called The Life And Times Of Little Richard, described his voice as "a fire blizzard across an arctic waste. I mean, every major rock singer tried to copy his voice."

In the 1950s, the music industry — like so much else in America — was segregated.

White artists like Pat Boone often scored big hits by covering Little Richard's songs. And Little Richard claimed that he didn't see "a dime" from some of those covers.

"I been knocking for years and they won't let me come in," he said. "I keep coming back, trying it again. Haven't got nothing. While I was slipping and sliding, they was keeping and hiding — putting my money in unknown banks."

Eventually, Little Richard did make a lot of money from his recordings, movies and TV appearances. He toured the world. He was, in many ways, a living icon who was both respected and ridiculed.

Little Richard was a man of extremes: A wild pop star and a deeply religious person known to carry his Bible everywhere, and quote from it often. There were periods during his career when he left show business altogether to preach. He often said he wanted to be a minister, like others in his family.

The 1970s were rough for Little Richard. He was drinking and doing drugs daily, a habit that was costing him hundreds of dollars a day.

His younger brother died around this time, and two of his friends were killed.

"And then I said, 'Well, God is trying to tell me something.' Then the thought came to me: 'What shall he profit a man if he should gain the whole world and lose his own soul?' Or 'What shall a man give God in exchange for a soul?' And I decided I would give my life to God."

It took someone like Little Richard — a fearless performer and gifted musician — to move American music forward. He liked to remind people he was "the architect" of rock and roll. He didn't build the music by himself, but he was one of its most original designers.