Accessibility links
Chief Medical Officer's Handling Of Coronavirus Inspires Alaskans To #ThinkLikeZink Dr. Anne Zink works from a yurt 40 miles north of Anchorage. She has the ear of the Republican governor and has helped keep the state's number of COVID-19 deaths the lowest in the nation. 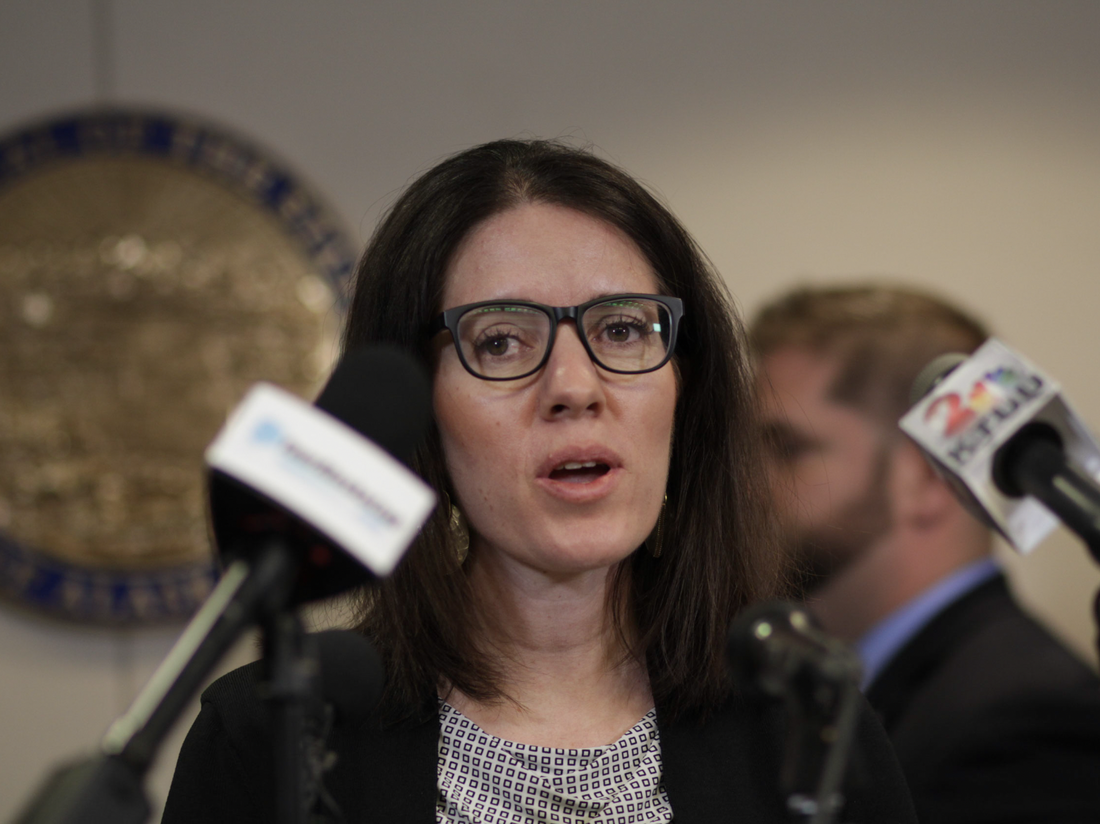 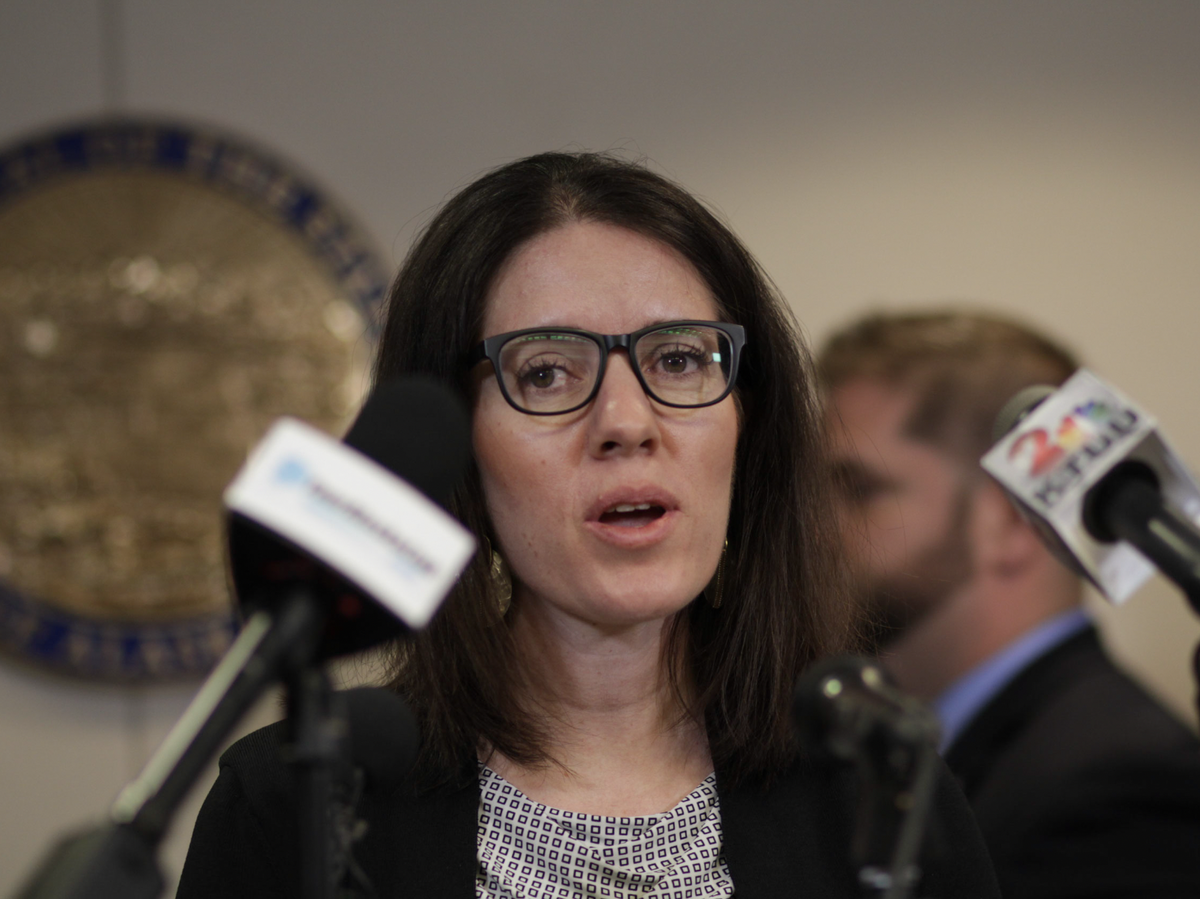 Dr. Anne Zink, Alaska's chief medical officer shown here at a press conference in March, has gotten praise from residents for her approach to dealing with the coronavirus outbreak.

As the COVID-19 pandemic began to pick up in Alaska, Dr. Anne Zink, the state's chief medical officer, faced a difficult choice.

Should she continue in-person meetings and nightly briefings with Republican Gov. Mike Dunleavy? Or should she opt for a more socially distant form of engagement?

Zink chose the latter, saying she wanted to model the behavior that she has been appealing to residents to follow.

She now appears at Dunleavy's briefings by video. And over the past two months, she has become a trusted voice as she urges Alaskans to follow the strict social distancing and other public health guidelines adopted by the state administration — which doctors groups have credited with keeping the state's COVID-19 numbers among the lowest in the country.

Zink, who has a Facebook fan club and a #ThinkLikeZink hashtag, isn't the only public health official to acquire a cultlike following during the pandemic: Dr. Anthony Fauci, the federal infectious disease expert, has inspired a Saturday Night Live tribute and socks printed with his face, while Ohio's top doctor, Amy Acton, has sparked Internet memes and YouTube imitations.

But Zink is almost surely the only one helping to run her state's pandemic response from a wood-stove-heated yurt behind her family home.

Zink said she struggled with the decision to relocate there, after a two-week quarantine at her family's ski cabin south of Anchorage. Dunleavy, she said, is an "in-person sort of person."

"But I don't have to be there in-person for meetings," Zink said in a phone interview from the yurt. "And the more I can do remotely is just one less interaction between people and one more way to slow the spread of this virus."

Zink, 42, is an emergency room doctor who started as Alaska's chief medical officer last year, less than six months before the pandemic began. Since then, she has been widely praised for her ability to connect with Alaskans by projecting calm and empathy.

"We're doing what she's asked us to do, because she's encouraging us — she's not threatening us," said Sarah Erkmann Ward, an Anchorage communications consultant who recently published the blog post, "Five reasons Dr. Zink is crushing it as a crisis communicator." 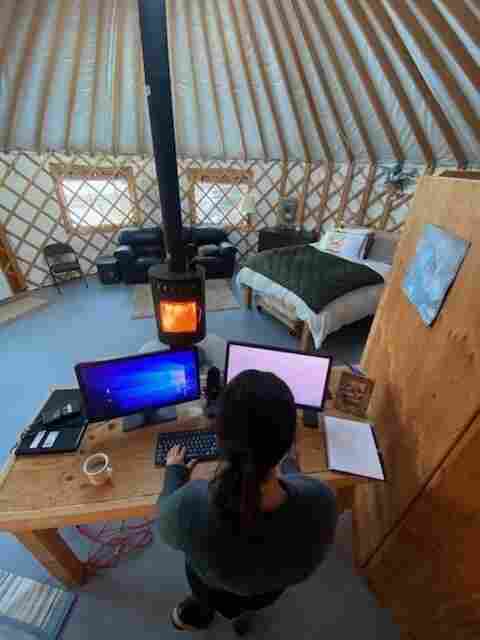 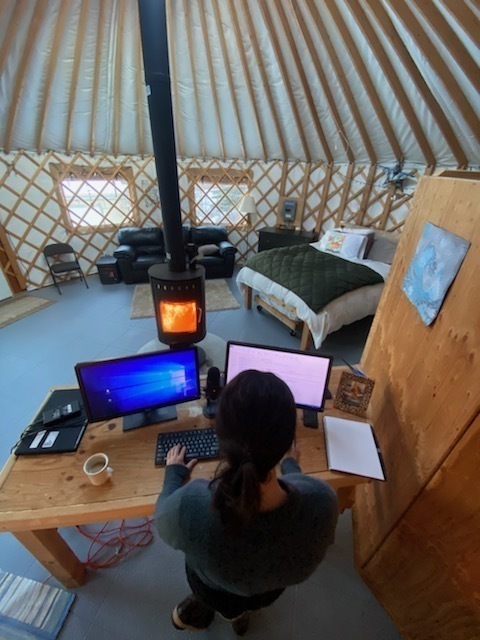 Dr. Anne Zink works from a yurt behind her family home, with three phones and three laptops, sometimes starting at 4 a.m.

"She is the right person at the right moment that we never knew existed," Ward said.

Zink, who lives with her husband and two daughters in the farming town of Palmer, 40 miles north of Anchorage, calls the attention "a little surreal."

"I sit by myself at a computer, talking to the computer — all sorts of people see it, hear it in a way that I'm not always expecting," she said. "It's been a struggle with each of these decisions, and this is definitely uncharted territory for all of us."

Zink grew up in the Denver area, where both her parents were doctors.

Her maternal grandfather, Al Bartlett, was a University of Colorado Boulder physics professor and a nationally recognized speaker on exponential growth and humans' inability to comprehend it — a lesson not lost on Zink as she navigates the COVID-19 pandemic.

During college, Zink spent summers in Alaska as an instructor for the National Outdoor Leadership School, then got a medical degree from Stanford University and did a residency in Utah before moving to Alaska.

Zink said her work as an emergency room doctor gave her a firsthand view of the policy failures of Alaska's social safety net, such as its limited treatment options for drug addiction and mental health problems. At one point, she was punched in the face by a disturbed patient, leaving her with a black eye.

"I realized that if I wanted to care about my patients, I had to care about the policies in the hospital," Zink said in a December episode of the Alaska Landmine podcast.

She and a group of peers worked to reinvigorate Alaska's chapter of an emergency room doctors advocacy group, the American College of Emergency Physicians. Her work with ACEP took her to lobby in Washington, D.C., where she made an impression on Sen. Lisa Murkowski, R-Alaska.

"She was this young, articulate, hard-charging woman that you just think, 'Man, TV shows should revolve around people just like her,' " said Murkowski, who's friendly with Zink and calls herself a "huge fan."

When the state health commissioner offered Zink the chief medical officer job, she was with her family in Bhutan — one of a number of countries where they lived during a yearlong sabbatical. It was not long after Dunleavy, the governor, had been elected that he proposed deep cuts to health care that drew sharp criticism from many providers.

Zink is not registered with a political party and describes her affiliation as the "party of health." She said she didn't really know the governor or health commissioner or what it would be like to work with them.

"But I just also felt like I wouldn't know unless I tried," she said.

Dunleavy, in a phone interview, said he has come to trust Zink as an "honest broker" who presents him with information and choices, without advocating for a specific position.

The Dunleavy administration's aggressive measures to contain the coronavirus have undercut emergency room doctors' initial skepticism about Zink taking the job and so has the state's low number of cases, said Dr. Nathan Peimann, president of Alaska's chapter of the ACEP advocacy group.

"That was because of the actions of the administration," Peimann said. "I give Anne and the governor credit."

After more than a month of frenetic work organizing Alaska's initial response to the pandemic, Zink and other top administration officials now face a different and more prolonged challenge: reviving the state's devastated economy while keeping the virus at bay, as residents grow increasingly impatient with the limitations on their lives.

Zink is working from her yurt with three phones and three laptops, sometimes starting at 4 a.m. She said she still makes time for runs or walks with her two daughters but spends most of her days on conference calls and in videoconference meetings — sometimes two or three at once.

Murkowski said she called Zink early on a recent Saturday morning, just to remind her to take care of herself.

"We exchanged the pleasantries, going back and forth. But then she wanted to spend the next half hour with me, updating me on everything that was going on, and all the good things and where the challenges were," Murkowski said. "She's just that type of person."