Accessibility links
Women Account For 55% Of The Rise In Job Losses Before the coronavirus crisis, there were briefly more women on American payrolls than men. That's no longer true. Women accounted for 55% of the increase in job losses last month. 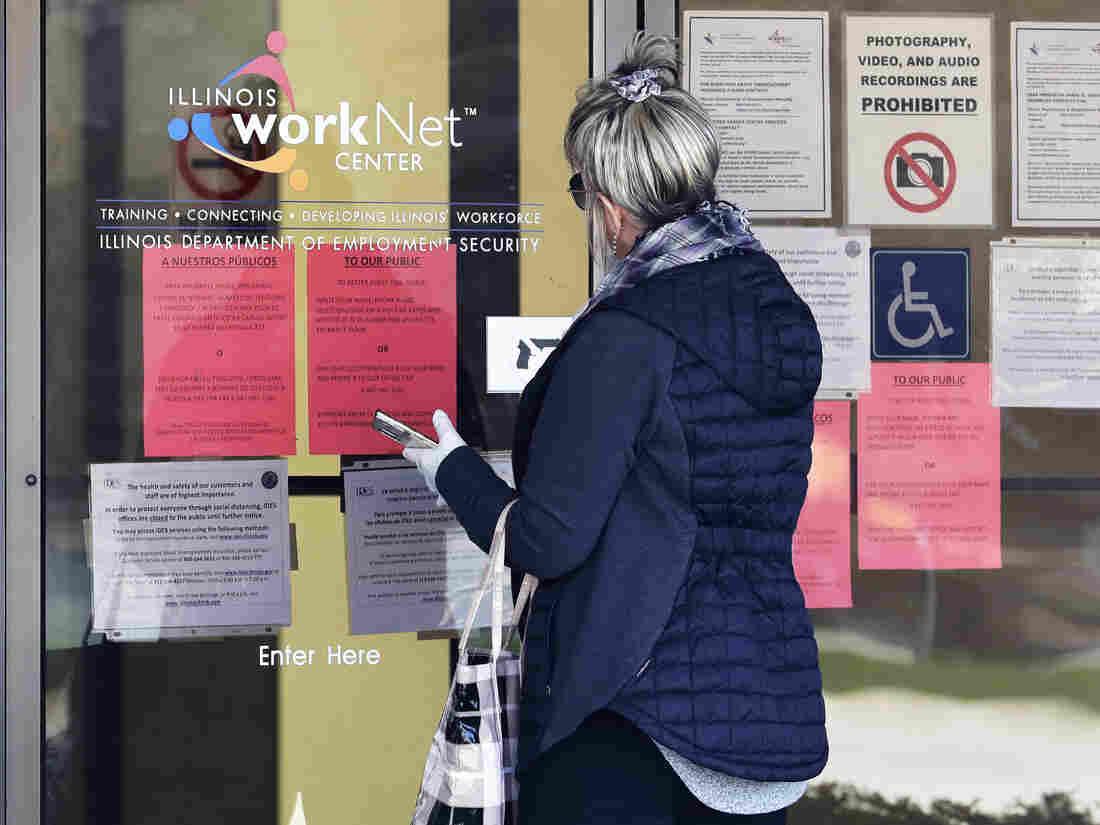 Before the coronavirus crisis, there were briefly more women on U.S. payrolls than men. That's no longer true. Women accounted for 55% of the rise in job losses last month. Nam Y. Huh/AP hide caption 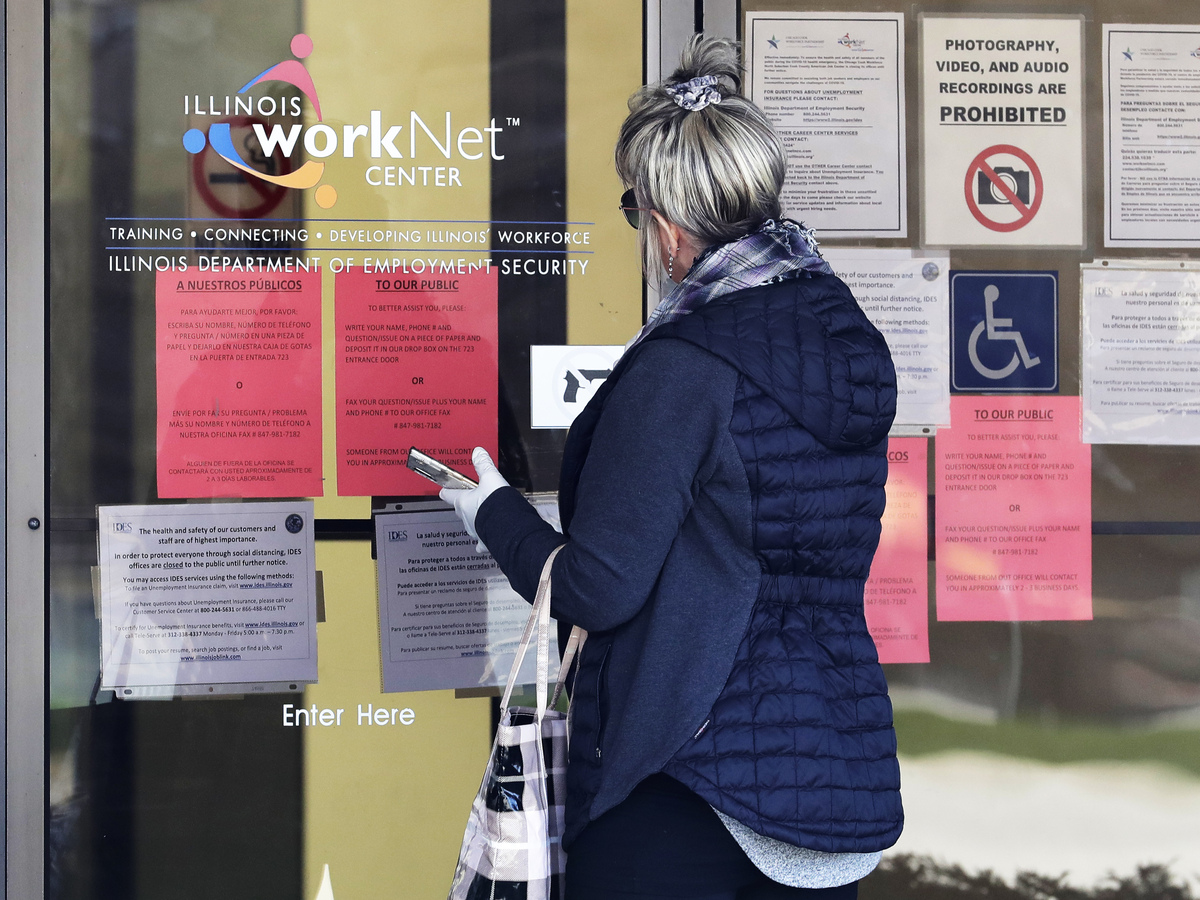 Before the coronavirus crisis, there were briefly more women on U.S. payrolls than men. That's no longer true. Women accounted for 55% of the rise in job losses last month.

Very briefly, at the end of 2019 and the start of 2020, there were slightly more women on American nonfarm payrolls than men.

That's no longer true. The historically disastrous April jobs report shows that the brunt of job losses fell on women.

Women now account for around just under half — 49% — of American workers, and they accounted for 55% of the increase in job losses last month.

Usually, the line bumps around near or just below zero — meaning men's unemployment is usually near or slightly higher than women's.

But that spike on the far right shows how women's unemployment leapt to be 2.7 points higher than men's in April. Women had an unemployment rate of 16.2% to men's 13.5% last month.

That's uncommon for a recession. The below chart is a longer view, and the periods with gray backgrounds are recessions. During every recession since 1981, men's unemployment has shot up past women's — that is, the line dips negative.

This is a big sign of how the downturn caused by coronavirus is unlike past recessions, says Matthias Doepke, professor of economics at Northwestern University. He and some colleagues wrote a paper in March about the coronavirus' effects on women, before the first coronavirus job report was even out.

"It's stuff we said was probably coming," Doepke said.

They saw it coming for a couple of reasons, he says. One is the industries suffering most in this downturn.

Past recessions have hit male-dominated industries like manufacturing and construction relatively hard — think about the housing downturn and automaker layoffs after the 2008 financial crisis, for example. Those helped push unemployment for men higher.

This time is different, Doepke says: "The highest employment losses are things like restaurants and hospitality, hotels, and those are sectors with high female employment."

But there may be an even more important factor here, he says: child care.

"You have all these schools closed. So you have a much higher requirement for child care at home," he said. "And because women are going to do the majority of that already, they are more affected."

It is true that women do more child care in the home right now. Even in families with both parents working full-time, women are far more likely than men to manage schedules and activities, and to take care of kids when sick.

In addition, women are far more likely than men to be a single parent, meaning that a lack of child care leaves them with no options.

"You have 60 million single moms in the United States and many of them have no alternative child care, especially now that grandparents are not supposed to come over anymore," Doepke said. "And so for many of them, it's simply not possible to work again. So there will be forced unemployment because of child care."

One For The History Books: 14.7% Unemployment, 20.5 Million Jobs Wiped Away

The effects of this may last well beyond the coronavirus crisis — Doepke and his coauthors note that job losses in a recession often mean persistently lower wages, as well as less secure future employment.

That may mean that one long-term effect of this crisis is a wider gender wage gap.

However, Doepke also says some aspects of the current crisis could counteract those child-rearing forces working women are up against.

"One side is the side of employers who are now going to be more flexible, offer work from home much more than they used to, and maybe also just become more aware that everybody has child care needs, not just mothers," he said.

Many workers who are able to work from home, after all, have seen their fellow workers caring for children on Zoom meetings. The reality of parenting while working is much more visible for some workers and bosses now.

School Bus Driver: I Lost My Job Over The Dispatch Radio

In addition, the economic crisis could contribute to further shifting of social norms in terms of how much work fathers do.

"There's also going to be millions of families right now where things actually completely reversed because the mother is maybe a doctor or at the hospital and has to be there," Doepke said. "Whereas the father is an academic like me or an office worker who can work from home or maybe even is unemployed and therefore by default becomes the primary provider of child care."

But then, there remain the millions of workers who can't work from home and who are hard at work at the grocery store or delivering food. The gendered effects of the crisis will also vary by class and race, and will become much more clear as we get more and more jobs reports.