Accessibility links
Review: 'Network Effect,' By Martha Wells Martha Wells' freethinking robot stars in its first full-length adventure, remaining just as misanthropic and TV-obsessed as ever, even as it attempts to figure out who kidnapped it and its friends.

Murderbot Makes A Triumphant (And Cranky) Return In 'Network Effect'

Murderbot Makes A Triumphant (And Cranky) Return In 'Network Effect' 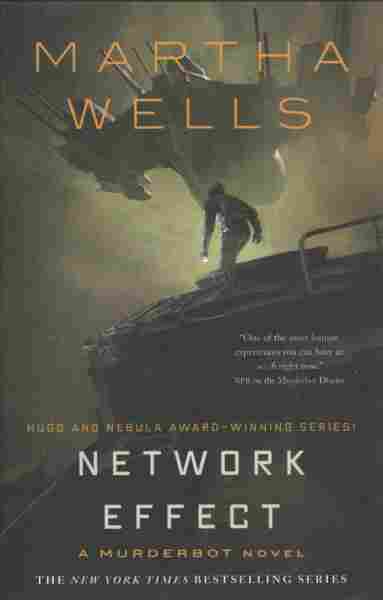 The name just rolls off the tongue, like a mascot for a sadistic intergalactic sports team. And if you've been reading author Martha Wells' award-winning Murderbot Diaries novellas, you have been cheering on the titular Murderbot from the sidelines for four, bite-sized adventures so far.

Wells' latest, Network Effect, is the first full-sized novel featuring our favorite cranky, cynical, sentient, artificially intelligent robot. For those unfamiliar, I'll give you a few minutes to catch up on the first four books. Done? OK, well that might not be long enough for a simple human, but for Murderbot, it would have been plenty of time to read the previous four volumes, watch an episode of future soap opera The Rise and Fall of Sanctuary Moon and break into a security system to complete a mission.

Murderbot is a rogue Security Unit robot (SecUnit for short) that hacked itself to become free. It's Johnny 5 from Short Circuit but without the lightning strike; a Terminator without the time travel; and little bit of Star Trek's Lt. Commander Data, without the need — or even want — to become more human. In fact Murderbot (which named itself, following a bloody incident in its past) already has a lot of human qualities — as well as some organic parts — but it doesn't really like most humans all that much. It'd much rather be left alone to watch its favorite TV shows in peace and silence. (A relatable trait if there ever was one.)

The first four novellas cover a lot of this ground: Murderbot takes its first free steps, saves some people, discovers things about its past and its place in the world. And if the first books were episodes in a four-part TV miniseries, then Network Effect is the feature-length movie with the bigger budget and scope, and it is no less enjoyable.

... if the first books were episodes in a four-part TV miniseries, then 'Network Effect' is the feature-length movie with the bigger budget and scope, and it is no less enjoyable.

Like the series-to-full-length movie format it follows, everything is a bit wider and a bit heavier, but all the hallmarks of the series are there. We get a return of some beloved characters, more dodgy corporate interlopers, more robots-on A.I.-on-robot (and augmented human) action, and a bigger mystery. But now, with a little more room to breathe, Wells draws out all of those elements in a way that extends the enjoyable experience of the novellas, yet doesn't drag. Network Effect is more than twice the size of All Systems Red, but you'll come to the final pages and hardly notice.

So what's actually happening? Without spoiling too much: Murderbot and some of its current friends are quite suddenly captured and whisked across space. Figuring out who and why forms the meat of the plot, but the sudden realization that an old acquaintance might be responsible complicates things for Murderbot and the humans it is sworn to protect. That all seems pretty basic, but what makes it all stand out is the way Wells writes Murderbot's engagements with the world and the humans that inhabit it. It feels legitimately the way I imagine a sentient computer system that is smarter than all of us — but also watches a lot of trash TV — would view the world.

One of the consistent strengths and joys of the series is Murderbot's internal dialogue. It catalogues the world with files and backups and keyword tagging that are both technical and humorous. It also has a childlike way of narrating through problems, of chiding itself for its failures and cheering on its own successes in a way that is hard not to find endearing. Here's Murderbot having a conversation with some hostile targets — while also hacking their targeting drones:

The good thing about being a construct is that I can have a dramatic emotional breakdown while still running my background search to find the drone key commands. I'd had a hit and a responding ping from the targetDrones right when Target One had called me boring. (Irony is great.) I sent the order to power down and they dropped to the deck with two loud thunks.

Target Two's gray face went surprised, then furious. It was kind of funny. This was a point where if I was a human (ick) I might have laughed. I decided to go with my first inclination and kill the s*** out of some ass-faced hostiles.

Wells is also adept at taking action that occurs in seconds, or even fractions of seconds because that is the speed of a computer, and slowing it all down for us simple humans to understand. And when Murderbot needs to live up to the name and get its hands dirty, Wells can also ratchet things up to John Wick-ian levels of visceral action.

The other strength of the series is a bit more subtle; it lies in the way Murderbot approaches gender. SecUnits like Murderbot are genderless, of course — they're just robots built to blast things. But even as Murderbot removes its shackles and starts developing a personality, it doesn't really take on a gender in any traditional sense. It has likes and dislikes, and personality traits that some might see masculine or feminine, but Murderbot doesn't think of them that way. Murderbot is just Murderbot, and gender here is a human construct.

This approach continues in Network Effect, with what appears to be the beginnings of a non-traditional romantic relationship that has been bubbling since early in the series, and that I hope Wells will give us more of. And that's the hallmark of any good series — it leaves you wanting more. Murderbot and the world it inhabits constantly leave you wanting more, in the best possible way.

Network Effect is a wonderful continuation of the series, and I highly recommend it if you enjoyed the first books. But if you haven't read those yet, you really should before trying this on for size. It's OK, we've got time. Not done yet? Sigh ... humans.