Accessibility links
The People Flying During The Pandemic And How Airlines Are Trying To Protect Them Planes are carrying medical personnel, essential workers and people returning from abroad or visiting critically ill relatives. Airlines are blocking middle seats and taking other safety measures. 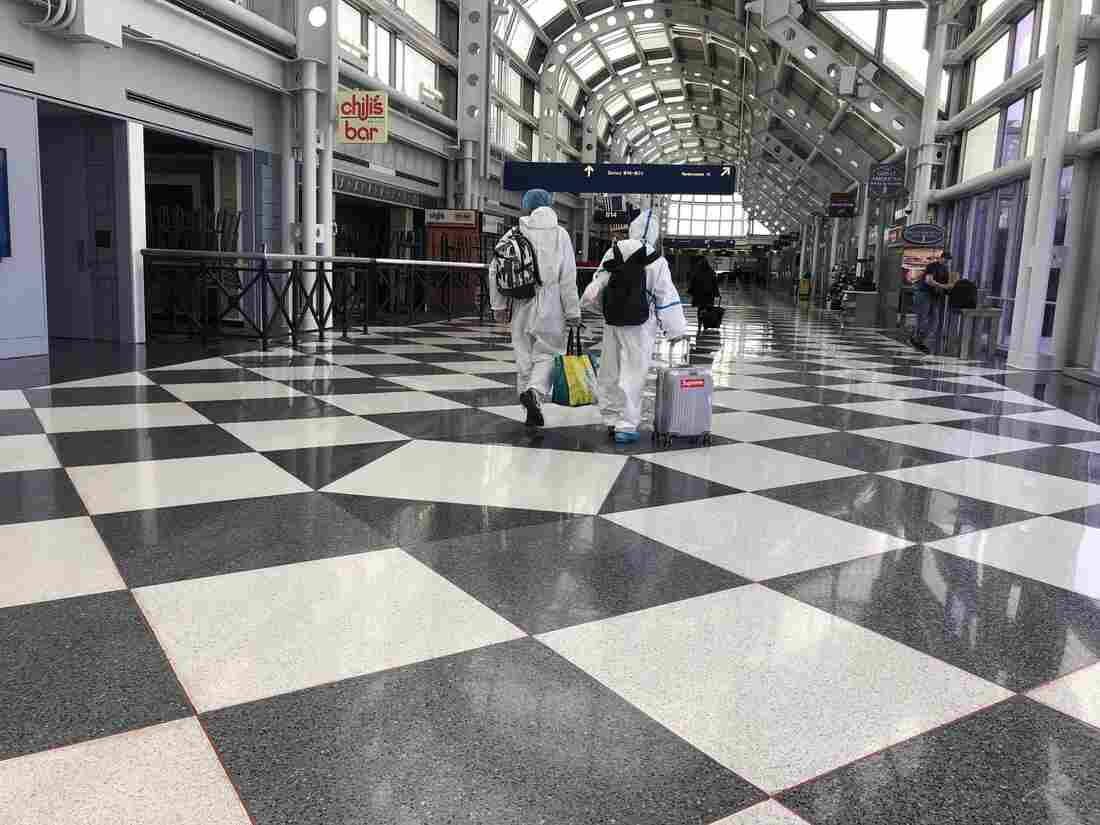 A couple dressed in protective gear walks through Chicago's O'Hare International Airport last week as the normal frantic bustle in the terminal was replaced by an unsettling calm. David Schaper/NPR hide caption 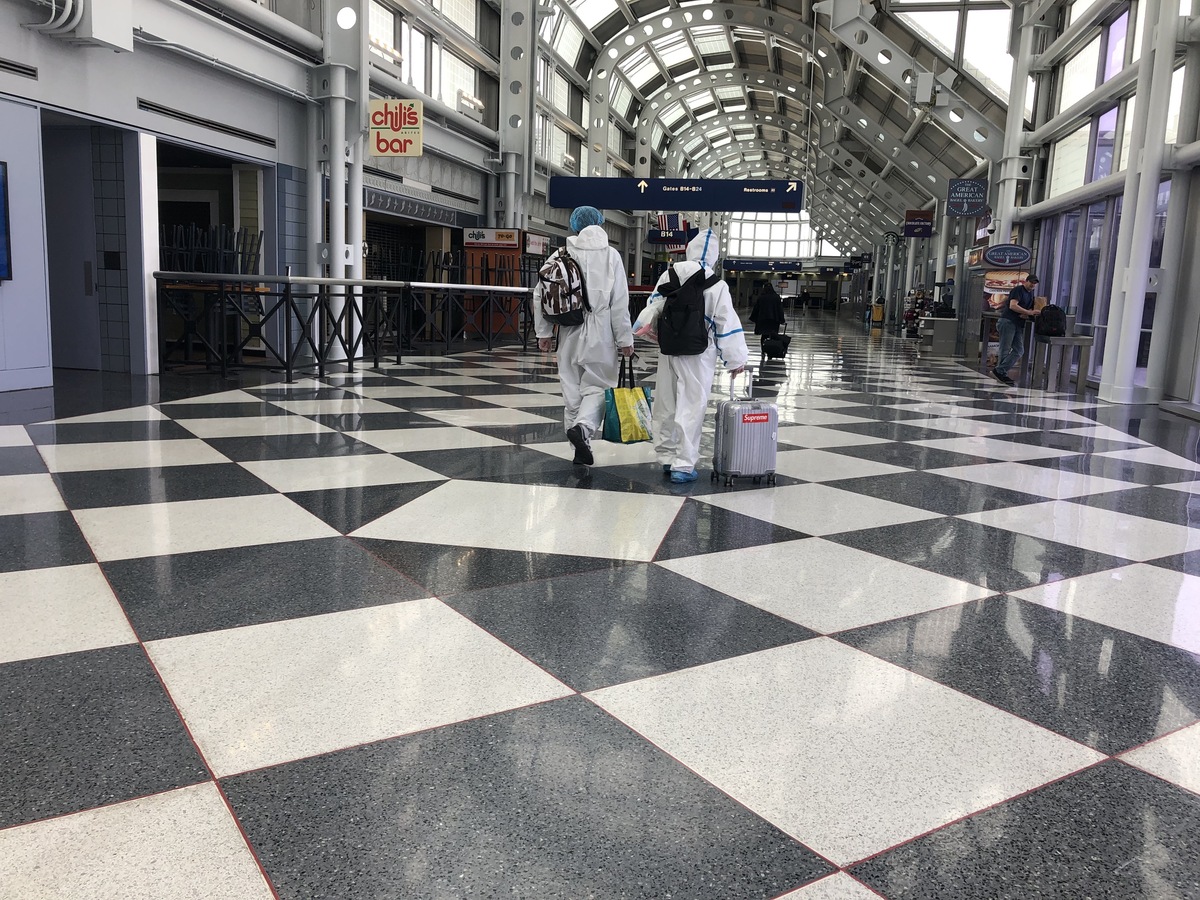 A couple dressed in protective gear walks through Chicago's O'Hare International Airport last week as the normal frantic bustle in the terminal was replaced by an unsettling calm.

Some People Are Still Taking Flights Despite The Coronavirus Pandemic

Some People Are Still Taking Flights Despite The Coronavirus Pandemic

In recent years, airlines have been cramming more seats onto planes and squishing passengers ever closer to one another. The entire airport experience isn't much better, with overcrowded eateries and bookshops, as well as tightly packed lines of people queuing up at check-in counters, at security checkpoints and on the jet bridge for boarding.

But that's not the case anymore.

"Airports are empty. The flights are empty," said physician Frank Garcini after stepping off a recent flight from Phoenix at Chicago's O'Hare International Airport.

"I was traveling on a small airplane with probably 40-something seats, and there were only six passengers on the flight," he said.

"I think life as we know it has changed" because of the coronavirus, Garcini said, adding that airlines will need to adapt. "I anticipate that the standard operating procedures in the future will change because of our new reality."

Social distancing in the airport

Few industries have been hit as hard by the coronavirus pandemic as the airlines. With the number of people flying having plummeted more than 90% since the beginning of March, U.S. airlines have slashed their flight schedules and parked half their fleets, more than 3,000 planes in all.

The few planes that are flying are almost empty, averaging just 17 passengers per domestic flight, according to the industry group Airlines for America. And now, to try to ensure the safety of the passengers they do have, airlines are making changes.

Most U.S. carriers are requiring passengers and crew members to wear masks or facial coverings in gate areas and on flights.

In the terminals, airports are taking other steps to protect passengers and employees, such as putting tape or markings on floors to help people remain at least 6 feet apart when waiting in line.

"We put up sneeze guards throughout the terminal between customers and employees [and] at the gate when you scan your boarding pass," said Mike Hanna, vice president of operations for United Airlines at O'Hare airport.

"We're encouraging customers to scan their own boarding pass as well, so we're not handling their documents. We're also limiting the number of people going down a jet bridge at one time so they can also separate and socially distance themselves," Hanna explained.

On a recent day at O'Hare, passengers arrive free of traffic jams, with none of the usual chaos at the curb. Inside the terminal, there are no mobs of people dragging roller bags while they try to figure out which interminable line to get into. It's just a sea of empty check-in kiosks and counters, with a dozen or so airline and airport employees milling about, with no passengers to assist.

With so few people in the airport, social distancing is easy. Normally packed gate areas have scores of empty seats. There are no lines to worry about, and if there were, tape on the floors mark how to space 6 feet apart.

It's eerily quiet in the terminal, the normal frantic bustle replaced by an unsettling calm.

"I feel like I'm in a Twilight Zone episode, kinda. It's like, super-eerie" says 21-year-old Quinn Scannell, who was living in Madagascar but had to leave as the borders there closed. 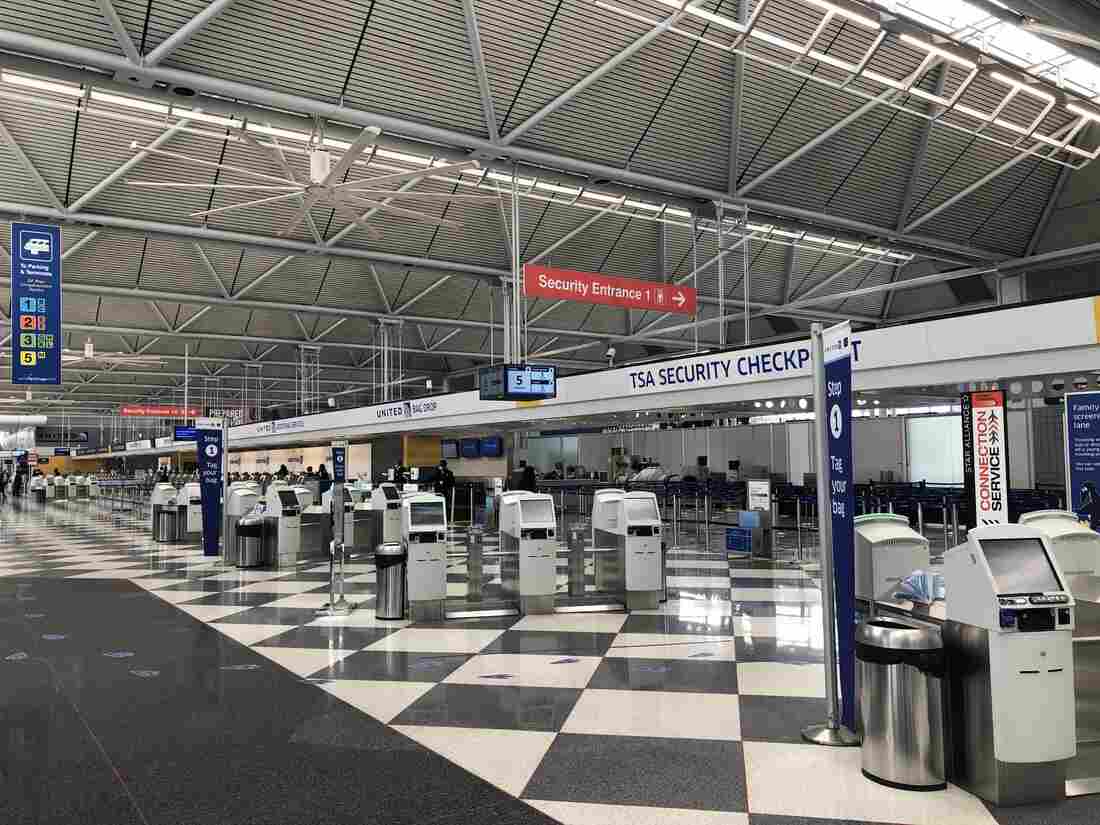 The nearly deserted check-in area at Terminal 1 of Chicago's O'Hare airport reflects the sharp decline in air travel, as the number of people flying has plummeted more than 90% since the beginning of March. David Schaper/NPR hide caption 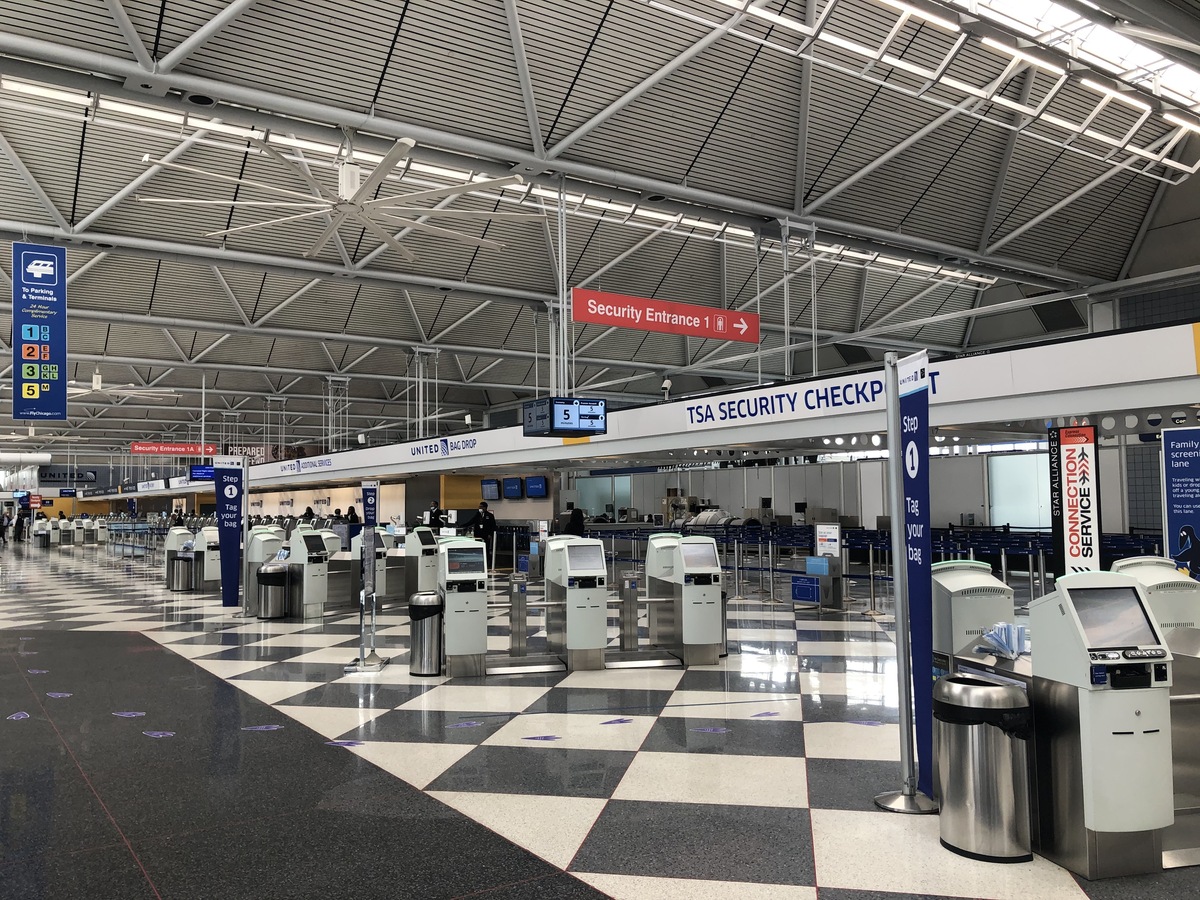 The nearly deserted check-in area at Terminal 1 of Chicago's O'Hare airport reflects the sharp decline in air travel, as the number of people flying has plummeted more than 90% since the beginning of March.

Other travelers include students who were studying abroad, people going to visit ill or anxious family members and those whose work is essential.

Among them is Kension Edwards, 47, a medical-equipment service technician from Raleigh, N.C.

"What we're workin' on, it's important for lots of people, so my way of doing my part, I guess," Edwards says. With no long lines and with airplane middle seats blocked out, there are fewer headaches for him in traveling now.

"It's nice having the extra room, but it's still a little bit scary because I think [the coronavirus is] a little bit worse than people thought at first," he says.

"As much separation as possible"

United is more thoroughly cleaning and disinfecting airplane interiors by using electrostatic cleaning, a process in which electrostatically charged cleaning fluids are sprayed throughout the cabins. The disinfectant "then begins to wrap around armrests, chairs, tables, etc. throughout the aircraft, and that helps to expand our coverage when we actually spray disinfectant," Hanna said.

"Some people call it a fogger, but it's not really a fogger," he added. "But it really covers very, very well."

Like most airlines, United is also taking steps to create physical distancing on planes.

"We definitely are blocking out middle seats, and where we have two seats on an aisle, we're doing them alternating window, aisle, window, aisle, to drive as much separation as possible," Hanna said.

Even with middle seats blocked off, a recent Delta flight from Los Angeles to Detroit was the most crowded plane that frequent travelers like Johannes Pulst-Korenberg had seen in weeks.

"Planes were ghost towns as of the past couple weeks that I've been traveling, and now it's like a third of seats [are full]? A fourth?" he said.

With airlines cutting so many flights from their schedules, some of the few flights that remain have been getting fuller in recent weeks.

Pulst-Korenberg is a neurologist splitting his time between LA and Philadelphia, something he says sounded like an OK plan before COVID-19.

"And now with COVID, it's a little more awkward, although I still feel fundamentally safe because I wear a good mask and I know how to use it," he says. "I am a little concerned though. I definitely don't trust the average person to not fly when they're sick, and if you have the sniffles, it's not going to prevent you from getting on a plane.

On this flight, nobody dares to sniffle, and everyone wears a face covering. When a flight attendant passes out a snack pack, a strange thing happens: Passengers eagerly dig past the Cheez-Its to get to the coveted Purell wipe inside. Jabar Akbar has a surgical mask he picked up on the job.

"I'm a nurse from Los Angeles, headed to Connecticut to help with the coronavirus epidemic," Akbar says. He has been traveling constantly since March, volunteering to work at hospitals hard hit by COVID-19.

"I want to be on the front line. I think that's where my skills are best served," he says.

Social distancing on planes right now is relatively easy because air travel demand is next to nothing. But what about when large numbers of people start flying again?

"In the long term, that's a business model that cannot be sustained," said Nick Calio, president of Airlines for America, in a Senate commerce committee hearing on Wednesday on the impact of the coronavirus on the aviation industry.

Aviation industry analyst Marisa Garcia explains that blocking out or removing middle seats would reduce the number of seats airlines could sell by about one-third, sharply reducing revenue or forcing the airlines to raise prices on other seats to make up the difference. 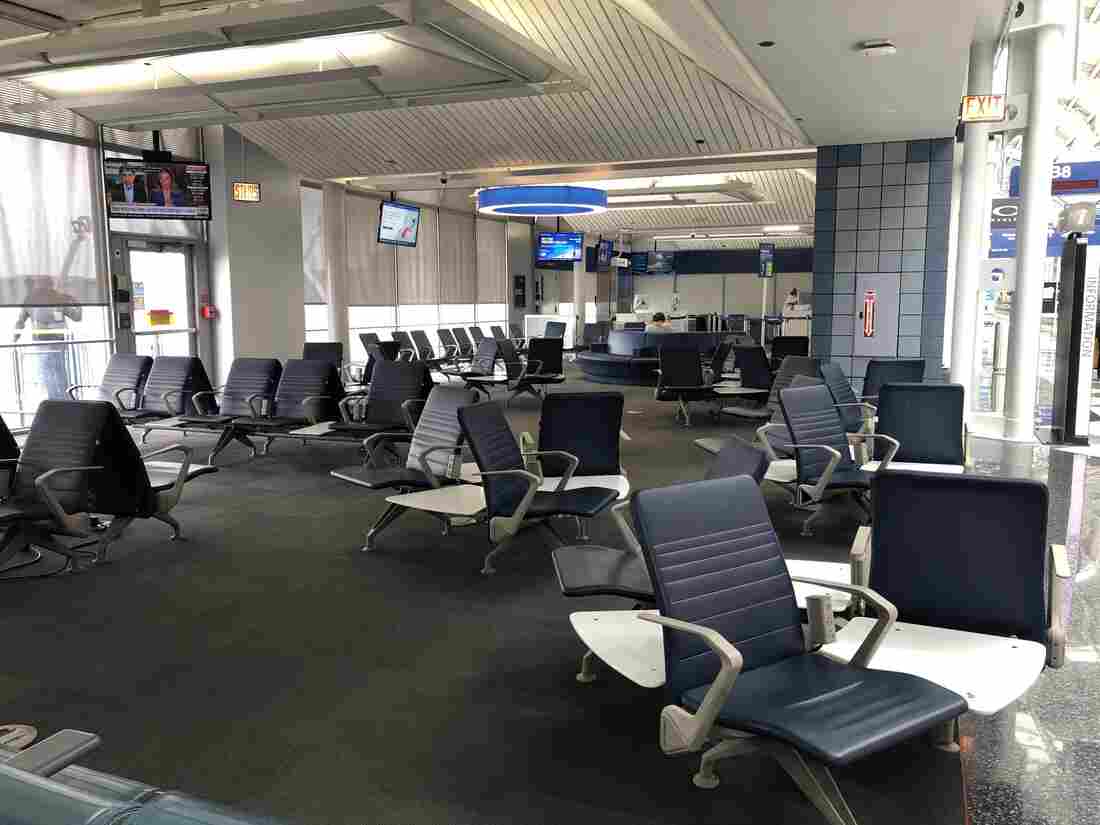 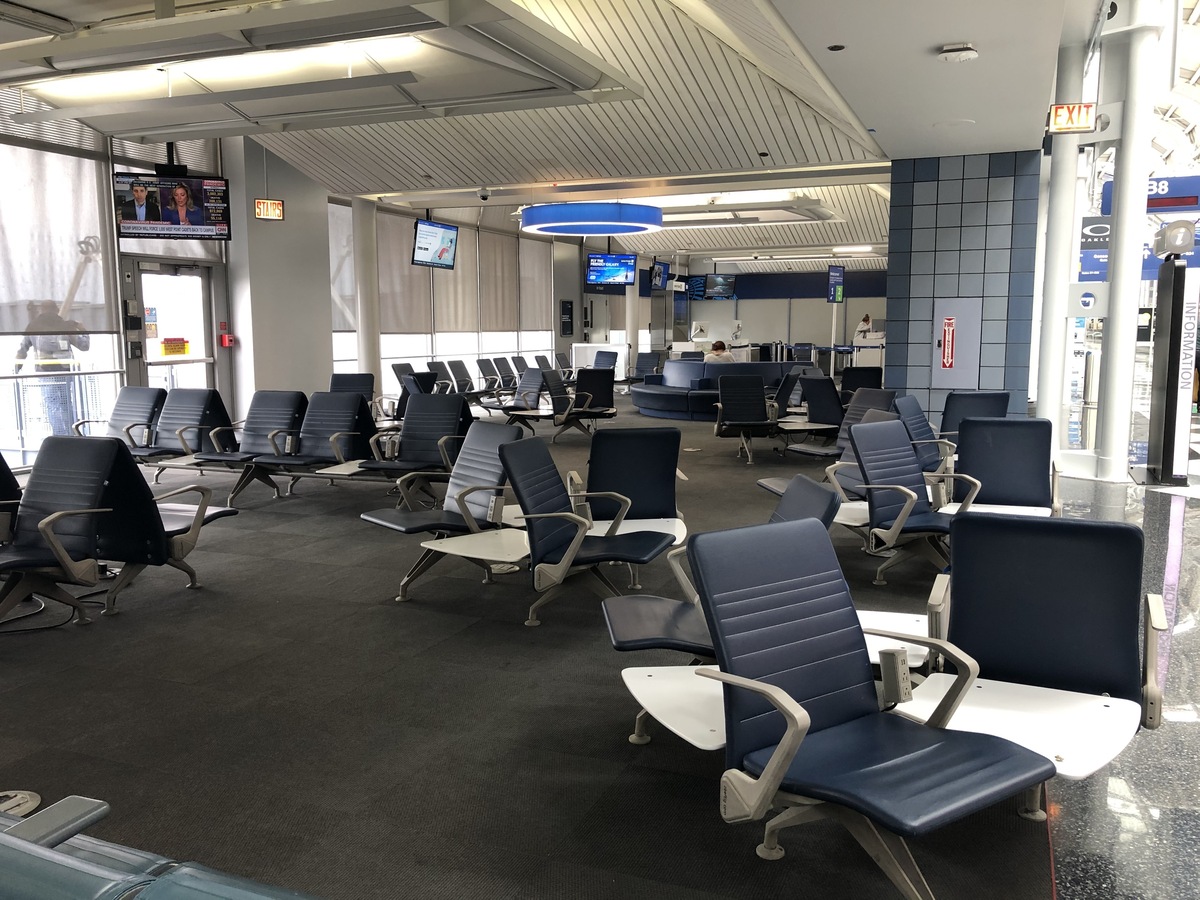 "It would force a reduction of capacity on all aircraft to the point where air fares would probably skyrocket, increasing as much as, over 50%," Garcia said.

Airlines and airplane manufacturers are looking at other ways to protect passengers from the spread of the coronavirus and other communicable diseases. Some suggest plexiglass dividers between seats or turning the middle seat around to face the rear of the plane. The Italian aircraft-interior design company Aviointeriors has drawn up plans to combine those ideas with a kind of plastic capsule that would surround each seat.

"So, you might still have three passengers seated together," Garcia says. "But there would be a plastic bubble between you, if you will, that still allows you to feel comfortable, but it would protect you in addition to a mask you might wear or if you were to remove the mask to eat or drink."

Any such solution would cost the airlines plenty, and right now U.S. airlines are burning through cash at a rate of $10 billion a month. But there are less expensive changes, such as using touchless technology so passengers and employees don't have contact during interactions and transactions, temperature scanning of travelers as they go through security or board the plane, and requiring "immunity passports" that would indicate if a passenger had recently been tested for the virus and cleared.

But regardless of which changes are adopted, it's safe to say a new normal will be coming to air travel and it will be unlike anything we've experienced before.