Accessibility links
Little Richard Made Music Vibrate In All The Right Ways Many artists around the start of the rock era pointed toward sex, but in his performance of "Tutti Frutti" and other songs, Little Richard enacted sexual excitement itself. 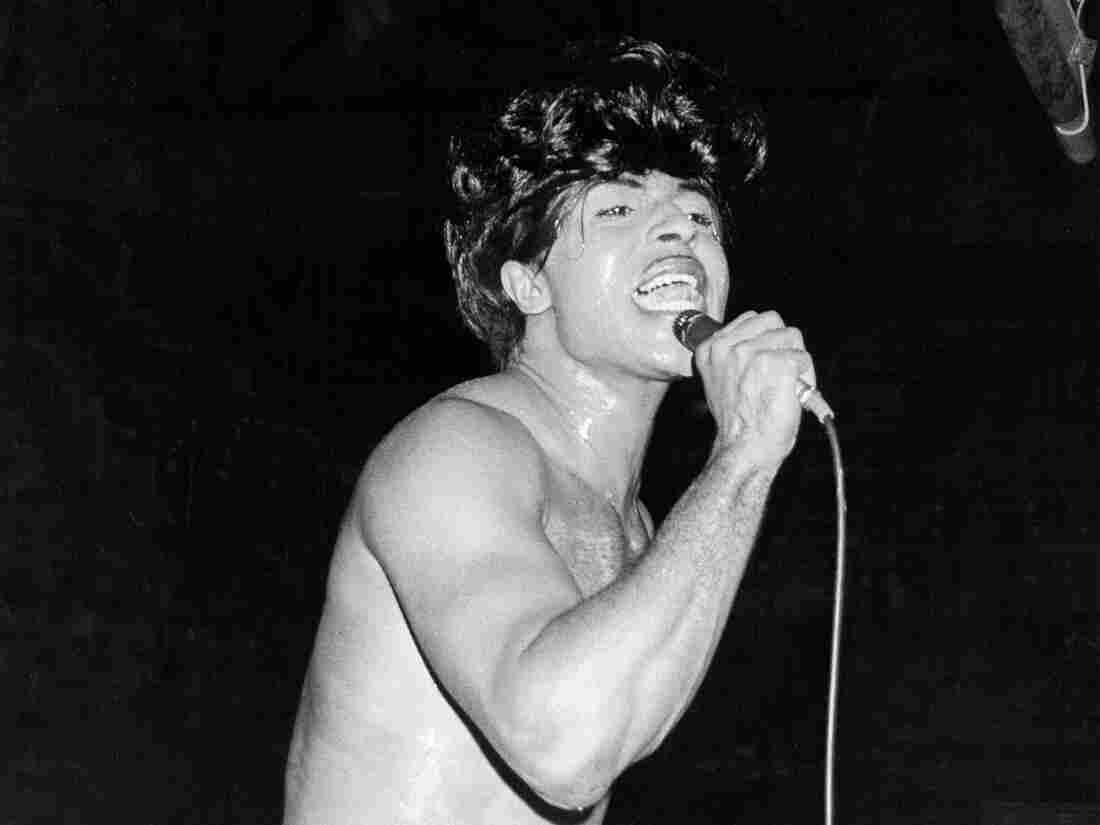 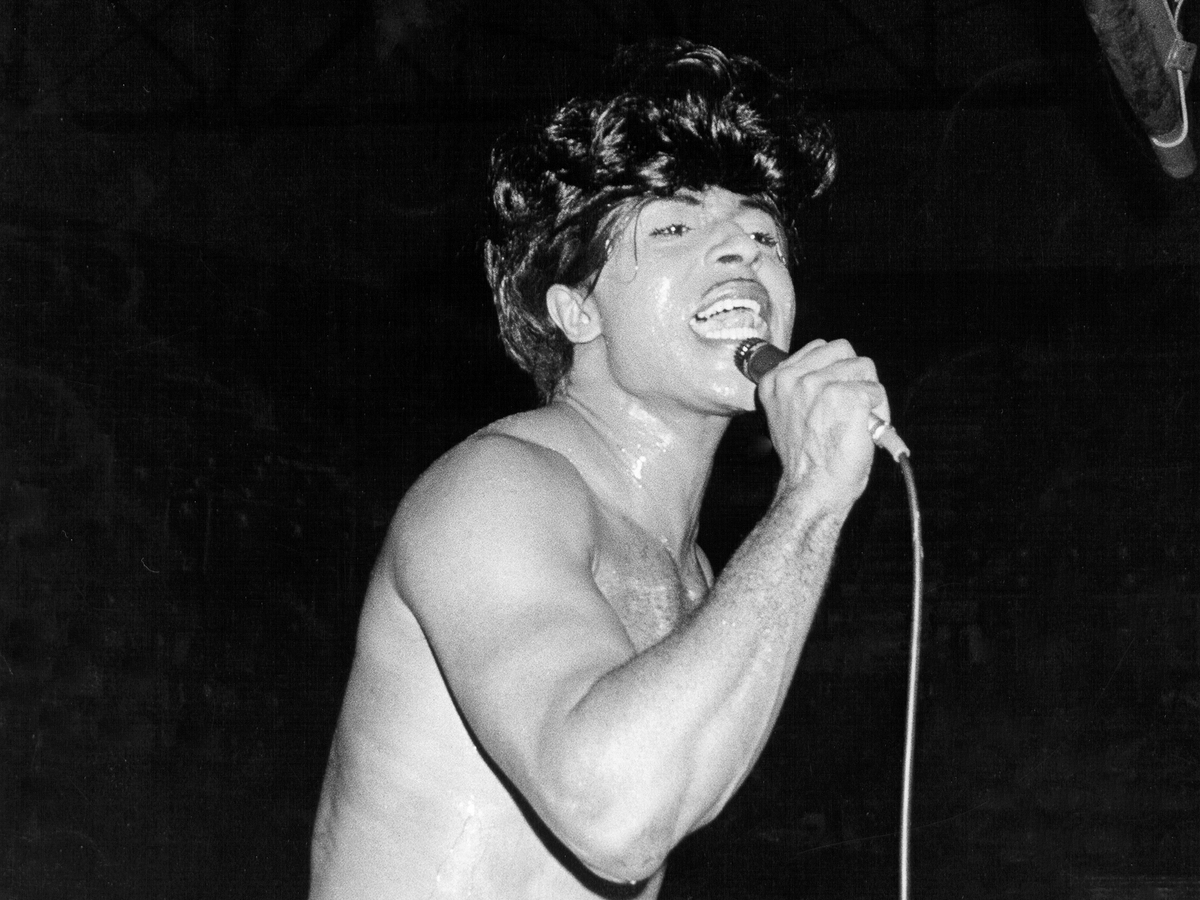 Little Richard died on Saturday, May 9, 2020 in Tullahoma, Tenn. at the age of 87. This essay was originally published as part of the book Good Booty: Love and Sex, Black and White, Body and Soul in American Music, written by NPR Music's critic and correspondent Ann Powers and published by Dey Street Books in 2017.

Elvis's two greatest contemporaries were Little Richard and Buddy Holly, each standing at either end of the spectrum upon which nonsense flourished. The Memphis King claimed the middle ground between his rivals' two extremes: the strategic outrageousness of Richard Wayne Penniman, the original Black Weirdo, bursting every seam apparently for the hell of it, but really as a way of sharing subterranean secrets of two centuries' worth of racial and sexual nonconformists; and the shy, bespectacled Charles Hardin Holley, archetypal White Nerd, stumbling over his words and music as a way of pushing them into shape. Little Richard represented what happens to unspeakable desires after they've been dug out of the dirt where society buried them. Buddy Holly's singing embodied desire in formation: thoughts that seem unspeakable because they've never been spoken before. Elvis came off as wiser than Holly and more innocent than Little Richard. All of them had the same basic mandate – to turn fearful feelings into fun.

Richard Penniman was uncontainable from the beginning of his life in Macon, Ga., a little queer boy whose penchant for dressing "beautiful" scared his father but whose precocious piano playing saved him from utter marginalization or an even worse fate. Inspired by gospel music and jump blues, he developed a vocal style that was, above all, loud. When a band touring through the South picked him up as a singer, his father finally granted approval of Richard's pompadour hairstyle – because that's how artists looked, after all. His early life as an entertainer included tours with drag queens, minstrel shows and girls who would, as he said to his biographer Charles White in the early 1980s, "roll their bellies and stuff" – Little Egypt's granddaughters carrying exotica into the nuclear age.

Unsurprisingly given the company he was keeping, Richard developed a wild act on the road and made a bunch of relatively successful rhythm and blues sides for labels like Peacock and RCA-Victor. But by the autumn of 1955 he was still mostly a Deep South sensation, and when he entered Cosimo Matassa's famous J&M Studios in New Orleans with producer Bumps Blackwell nothing was working. Richard felt uptight. He couldn't get noisy enough. Only when he and the studio musicians took a break at the nearby Dew Drop Inn and Richard decided to show off by playing a very dirty number that made the queens go wild in drag bars did Blackwell hear the lunacy that he knew the singer could deliver.

On this special edition of All Songs Considered, we look back at the life of rock and roll pioneer Little Richard through 10 of the defining songs of his career.

NPR Music Senior Director Lauren Onkey joins host Bob Boilen as they play singles from the early '50s up through his 1970 album, The Rill Thing.

But the song was obscene – all about "good booty" and what people did with it. Blackwell enlisted an ambitious young songwriter, Dorothy LaBostrie, to sub in some lyrics thin enough that Little Richard could saturate them with libidinal chaos while not breaking any censors' rules. What Little Richard did on "Tutti Frutti," as the song was called, was to eliminate the double entendres and make matters much more direct. Most bawdy R&B songs pointed toward sex, albeit sometimes with a giant foam finger. Little Richard's vocalizations enacted sexual excitement itself. Richard spewed notes as if they were raging hormones, growling like a bluesman one minute, whooping like a gospel queen the next, shouting out nonsense words in a way that signified everything and nothing, entering a truly undone state. The historian W. T. Lhamon identified Richard's particular gift as promiscuity: "The ability to jumble worlds seamlessly, white and black, straight and gay, gospel and blues and pop." If the doo-wop groups cleared space for that sense of play preceding the moment of sexual engagement, and Elvis made such play charismatically personal, Richard grabbed on to the very moment the drive took over and rode it right into his fans' flailing arms.

This is not to say Little Richard was more primitive than his compatriots. He was just more committed to excitement. He knew what it bought him. After following "Tutti Frutti" with the equally ungovernable "Long Tall Sally" in 1956, Richard became a pop star with an equal number of black and white fans, and protected himself by getting even more outrageous. "The white kids had to hide my records 'cos they daren't let their parents know they had them in the house," he told White. "We decided that my image should be crazy and way out so that the adults would think I was harmless. I'd appear in one show dressed as the Queen of England and the next dressed as the Pope." Literally embodying the mixed-up impulses that parents just didn't understand, Little Richard was happy to be the elephant in the room. He put a big smile on the face of depravity. Fans responded in kind. He was the first rock and roller to be barraged by women's underwear thrown by the crowd, and one of the first to have his shirts regularly ripped from his body into little pieces.

And depraved Richard was, by his own estimation. In his biography – which mostly consists of outrageous stories he told Charles White – he revealed himself as an omnisexual voyeur especially fond of dressing-room encounters. Richard likely knew that his refusal to play polite or subdue the signifiers of his blackness would cost him the chance to be the king of rock and roll; and there is little doubt that homophobia, internalized and otherwise, contributed to him leaving the secular music business in 1959 to marry and become a preacher. (He would repeat the cycle of exit and return, minus the wife, many times throughout his career.) Yet the omnivorousness Richard represented both in live performance and on record also couldn't last beyond the first few years of the rock and roll era. By 1962, when he made a comeback that began with a tour of England, the promiscuous frenzy of the music's early years had died down, and the old orderly divisions reasserted themselves. Richard was then classified by many as a novelty act selling outrageousness on talk shows. He continued to be a strong presence within rock, but his most important contribution during the 1960s was to insert a little chaos into the sound of the next big thing: The Beatles, who literally learned at his feet when they toured together in Germany, and included just enough of his squall in their sound to make the girls throw their panties again.