Accessibility links
No FEMA Legal Services Funding For Coronavirus The agency usually provides funding for legal aid hotlines after disasters. But the White House has not approved such funding for those affected by the coronavirus pandemic. 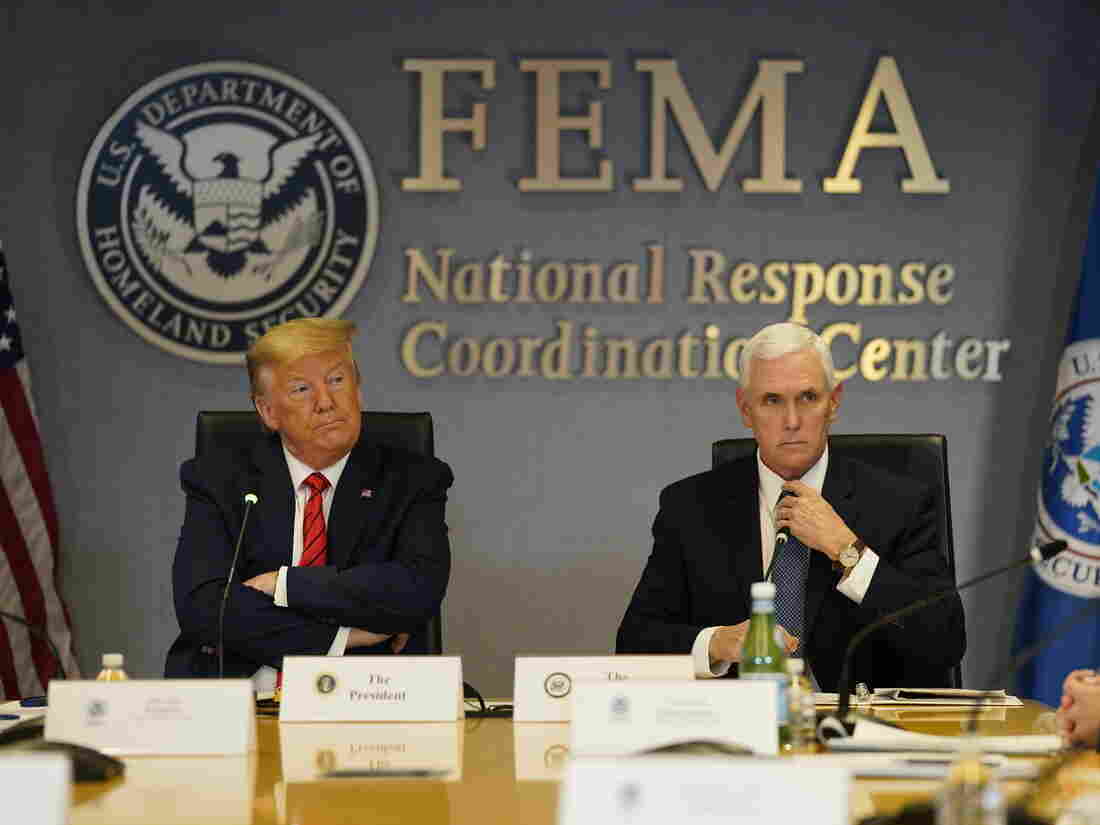 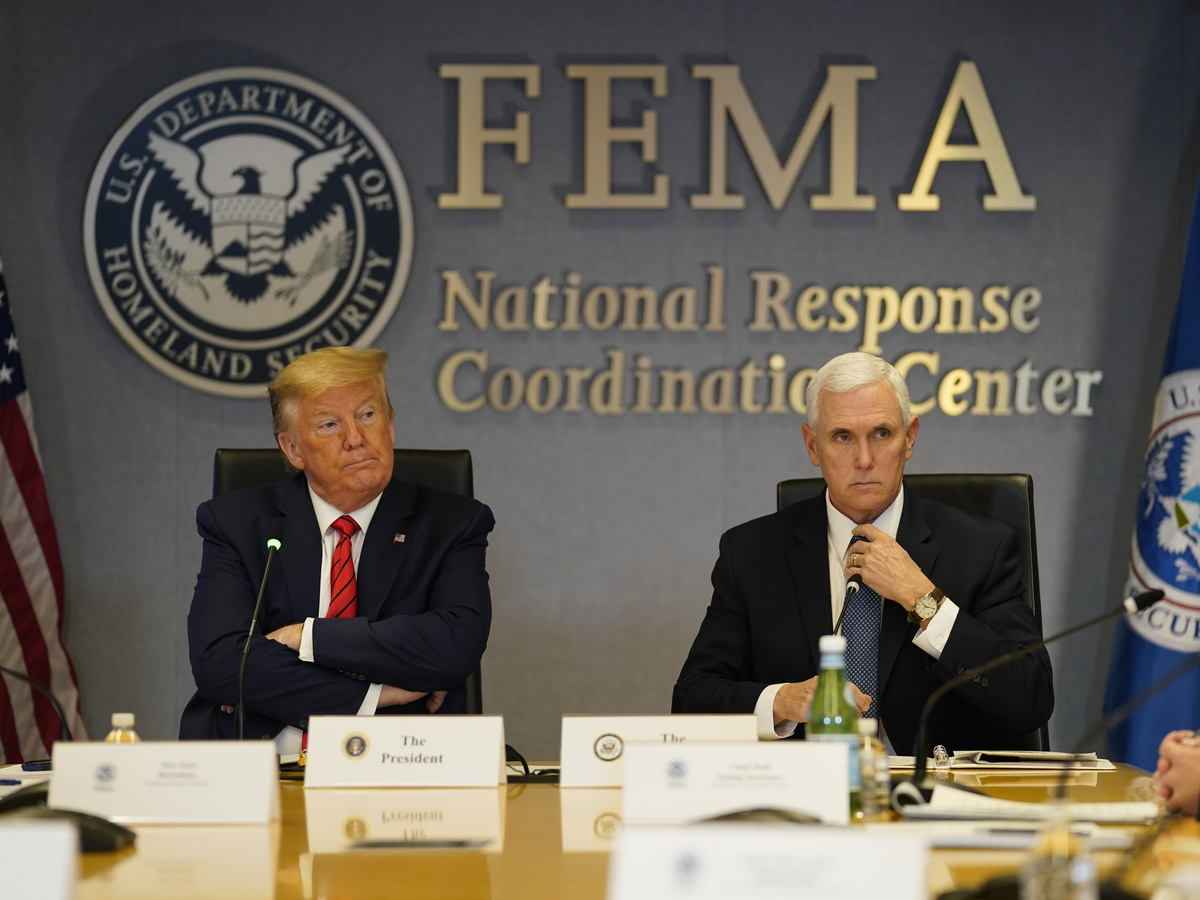 President Trump has not approved FEMA funding for legal help for Americans affected by the coronavirus. Disaster Legal Services are usually available to survivors of disasters.

Unprecedented job losses and furloughs have pushed millions of Americans to the brink of eviction during the coronavirus pandemic, but the Federal Emergency Management Agency and the White House have failed to fund a legal assistance program that is routinely available to disaster survivors.

After hurricanes, wildfires and other disasters, including recent tornadoes in Tennessee, the president has directed FEMA to provide money for legal hotlines in affected areas. The hotlines are run through a partnership with the American Bar Association, which provides local attorneys to work for free. The federal government pays up to $5,000 per hotline to cover operational costs such as phone equipment and software.

The Disaster Legal Services program is part of a larger suite of FEMA benefits known as individual assistance, which the governors of at least 30 states have requested in connection with the pandemic.

But the White House has not approved those requests.

The missing funding becomes more pressing every day because, unlike most weather disasters, the pandemic is causing long-term economic destruction. More than 33 million Americans have filed for unemployment in the past seven weeks. Temporary bans on evictions will likely expire in many cities beginning later this month, and families that delayed questions of custody, divorce or even intimate partner violence amid the growing pandemic will need help settling those issues as courts reopen.

"I think this will be the biggest legal aid crisis we will face in my lifetime," says Laura Tuggle, the executive director of the nonprofit Southeast Louisiana Legal Services, who has also provided legal assistance in the region after hurricanes Katrina, Rita, Gustav and Ike, as well as the Deepwater Horizon oil spill.

Congress included $50 million in legal aid funding in the March 28 coronavirus relief bill, but that money has already been distributed to more than 130 legal aid groups around the country that are struggling to meet demand.

"Now is the time," for FEMA to make legal services funding available, Tuggle says. "Frankly, I think every community in the United States is going to be in the same boat. It's an all-hands-on-deck situation."

The delay in legal services help adds to the emerging picture of FEMA as fumbling the federal pandemic response. In March, New York Gov. Andrew Cuomo accused the agency of driving up prices for crucial materials and failing to supply the state with an adequate number of ventilators.

As the pandemic spread across the country, a team of volunteers working under President Trump's son-in-law, Jared Kushner, sought to direct FEMA contracts to politically connected Republicans, according to The New York Times.

FEMA says state requests for individual assistance are "under review."

"The approval of programs in response to a disaster declaration request is made at the discretion of the president," a FEMA spokesperson wrote in an email to NPR. The White House did not respond to questions from NPR.

Craig Fugate, who served as FEMA administrator during the Obama administration, says it is up to the president to make legal assistance funding available.

"If disaster legal services were activated it would help those folks who cannot otherwise afford legal services," Fugate says. "You just think, with all of the deaths we've seen, families are going to have to start thinking about probating estates [and] wills, and all of the other legal ramifications that come when we lose a loved one."

Eviction is one of the most widespread legal issues that Americans face as a result of the pandemic, and losing access to housing can have profound public health implications.

In New Orleans, sanitation worker Bobby Parker says he went from working 80 hours every two weeks to working 32 hours, and when he was late paying rent on April 1 his landlord changed the locks on his apartment.

Parker is HIV-positive and his medications were locked inside. "I'm at-risk," he says. "I was scared."

A city case worker already assigned to help Parker access public benefits connected him to a lawyer at a local legal aid group. It took more than two weeks and the threat of a lawsuit, but the lawyer was able to get the landlord to let him back into the apartment. While he was locked out, Parker alternated between sleeping outside and staying with a friend whose wife sometimes worked overnight shifts.

Parker says if he hadn't had a lawyer, "I'd probably be a victim, testing positive for COVID-19."

Without FEMA funding, most states have been unable to offer legal hotlines, making it more difficult for people to get the type of help the New Orleans resident received. The FEMA-funded hotlines connect callers with pro bono lawyers, who often refer clients to local legal aid groups.

In Cleveland, where the outbreak has been relatively small, legal aid attorneys have nonetheless seen a surge in demand because so many people have lost jobs and are struggling to pay rent and bills.

In New York City, local lawyers say they've seen a massive influx of requests including calls from essential employees who have been illegally locked out of their apartments, workers who need help paying for food, and emergency and retail workers desperate to draft wills and other documents in case they die of COVID-19. 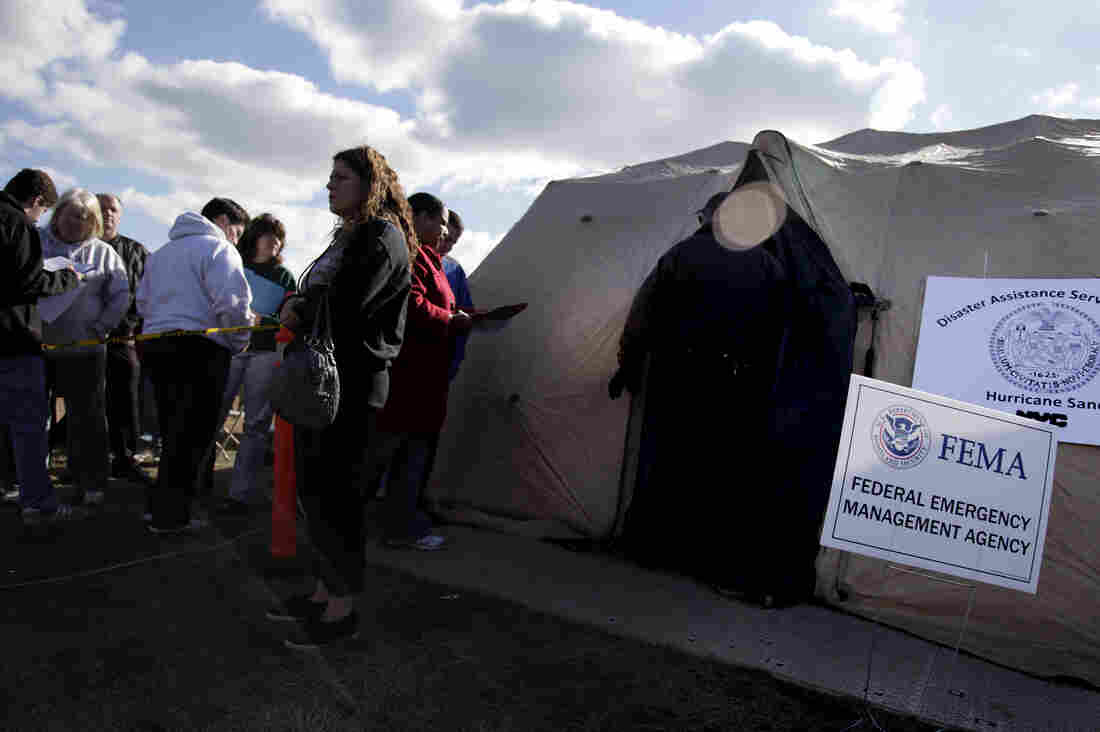 Residents affected by Superstorm Sandy wait outside a FEMA tent in 2012. FEMA has made disaster legal services available after past disasters, including Sandy and hurricanes Harvey, Irma and Maria. Seth Wenig/AP hide caption 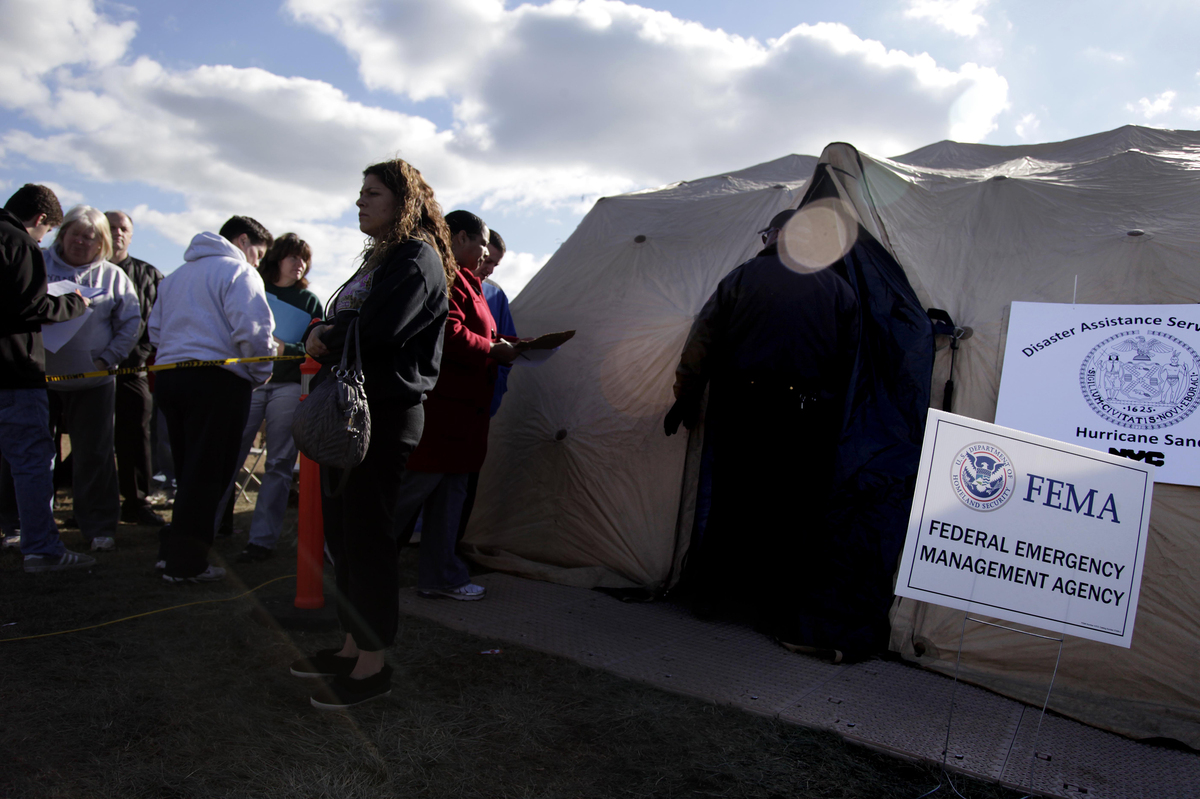 Residents affected by Superstorm Sandy wait outside a FEMA tent in 2012. FEMA has made disaster legal services available after past disasters, including Sandy and hurricanes Harvey, Irma and Maria.

"Our calls for public benefits assistance increased by 150% compared to the four weeks prior to the crisis," says Raun Rasmussen, the executive director of the legal aid group Legal Services NYC. He expects that when courts reopen, "there's going to be an explosion of need as things start opening up in the next few weeks and months."

FEMA-funded legal hotlines would help meet that demand. But only three states — Texas, Michigan and Nebraska — have been able to activate their statewide legal hotlines this spring, according to the American Bar Association.

"We have a handful of state partners that we work with that are very well equipped to respond to disasters, and they have hotlines that they can easily switch on," explains Linda Anderson Stanley, the director of the Disaster Legal Services program at the association. But many states have not experienced a disaster that warranted a legal hotline for 10 years or more, "and they don't have the capacity or the funds to just flip a switch and turn on a hotline."

One stark indication of the demand for legal help comes from states that have experienced other natural disasters during the pandemic. After tornadoes in Tennessee and earthquakes in Puerto Rico this spring, the White House and FEMA approved individual assistance connected to those disasters. Legal hotlines were activated on a limited basis for affected communities.

But Stanley says the vast majority of calls to those hotlines weren't about the natural disasters. Instead, people call with questions about the coronavirus pandemic.

In late March, Congress appropriated $50 million in extra legal funding in its coronavirus relief bill. "What Congress has, in my view, correctly determined, is that legal services are very helpful in both the response to and recovery from natural disasters," says Ron Flagg, the president of the Legal Services Corporation, the nonprofit that distributes the funds to local legal aid societies.

Flagg says the money Congress has made available so far is helpful, but not nearly sufficient to meet the growing need for coronavirus-related legal help. The Legal Services Corporation has already distributed virtually every dollar and has asked Congress to allocate another $50 million in the next relief bill.

Flagg and others point out that congressional appropriations are generally paired with FEMA legal funding. After hurricanes and wildfires in 2017 and 2018, Congress twice appropriated $15 million in extra legal aid funding, while FEMA funded legal hotlines in areas affected by the same disasters.

Stanley of the American Bar Association says it is frustrating to still be waiting for FEMA funding. "By now I expected there to be a change," she says. "We're really struggling to figure out where the breakdown is."