Accessibility links
Betty Wright Packed A Career's Worth Of Music Into Her Youthful First Act Already a veteran by the time she was out of her teens, the early career of Betty Wright, who died Sunday, produced many R&B hits, including a pair of songs that would become career signatures. 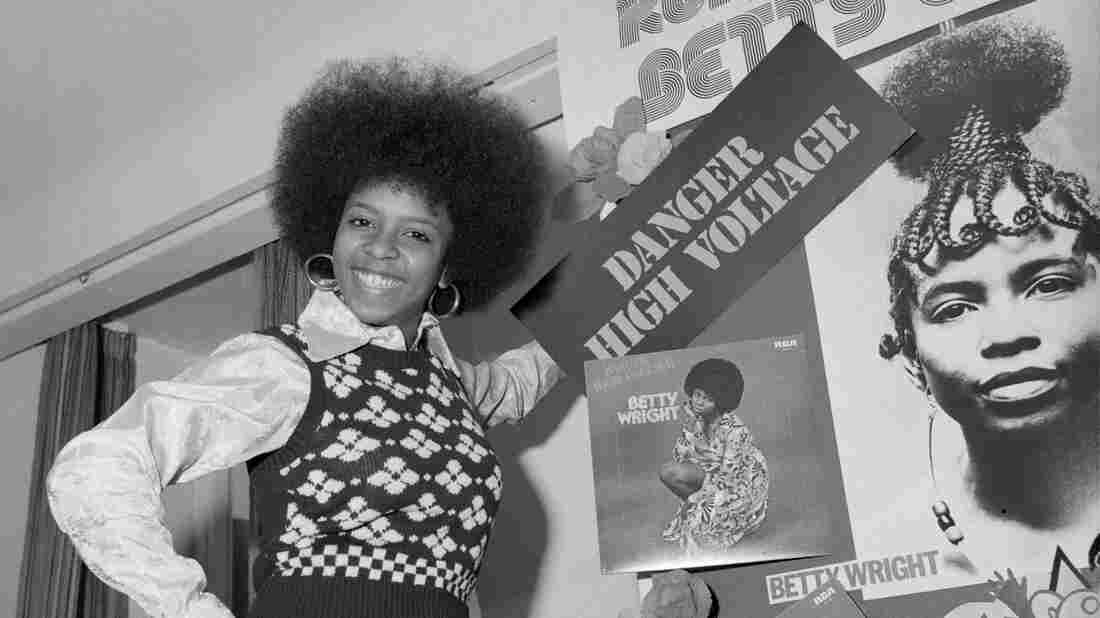 Betty Wright in 1975, when she was 21 years old, stands with a display of some of her album covers. Wright was already a veteran by the time she was out of her teens, having released four studio albums that included multiple songs that would be career signatures. Central Press/Getty Images hide caption 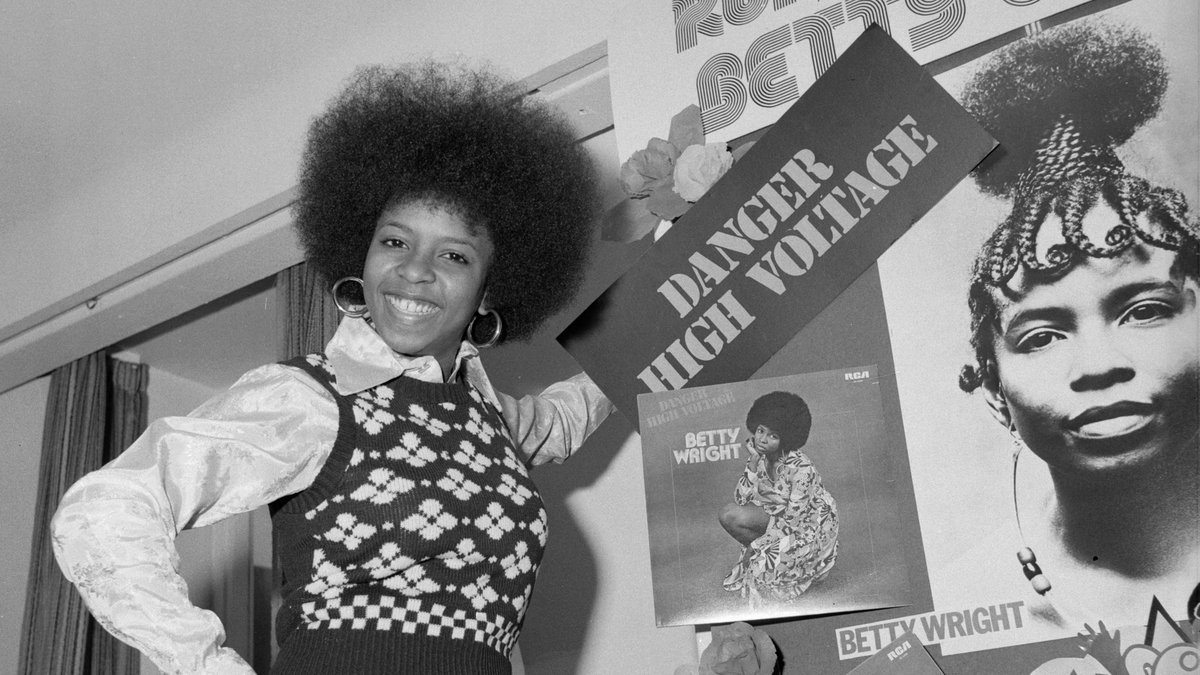 Betty Wright in 1975, when she was 21 years old, stands with a display of some of her album covers. Wright was already a veteran by the time she was out of her teens, having released four studio albums that included multiple songs that would be career signatures.

In 1966, Betty Wright dropped by the offices of Deep City, a Miami label located in the back of Johnny's Records in her home neighborhood of Liberty City. She had been recently discovered by artist, songwriter and producer Clarence Reid, who wanted Deep City co-founder Willie Clarke to take a listen to Wright's singing chops. As recounted in journalist John Capouya's book, Florida Soul, Clarke was rehearsing with a band when he heard Wright singing over Billy Stewart's "Summertime" in another room: "The record was down low but she had overpowered his lead voice. She just shut down our rehearsal." Deep City signed Wright soon thereafter. She was only 12 years old but felt ahead of her time.

Wright's age at the outset of her career is a bit of essential R&B trivia, but it shaped the career of one of Miami's greatest singers in crucial ways. Born Bessie Regina Norris in December of 1953, Betty Wright was a transcendent artist across multiple eras, building an entire body of work by the time some of her musical peers were just finding their voices. When she emerged with her preternatural gifts in the 1960s and then especially as her career blossomed across the 1970s, it's hard to imagine a more versatile talent, one who could belt like Aretha Franklin, hit the whistle register like Minnie Riperton and spin melodramas like Millie Jackson. By the '80s, she would launch her own successful independent label, Ms. B Records; by the '90s her music became sample fodder for younger contemporaries like Mary J. Blige and Beyoncé; across the 2000s a parade of artists lined up to work with her, from The Roots to Rick Ross, Angie Stone and Lil Wayne.

Wright's accomplishments merit volumes of memoirs but in the wake of her passing over the weekend, I find myself thinking about three recordings in particular. These don't remotely sum up the expansiveness of her career but for me at least, they're reminders of what made her catalog such a marvel.

Recorded for her debut album, My First Time Around, "Girls Can't Do What the Guys Do" came out when Wright was still just 14. Unlike other adolescent artists whose youth was central in how they were marketed, Wright's vocal power allowed her to "pass" for a much older singer. This wasn't lost on her songwriters. Clarence Reid and Willie Clarke penned most of her early tunes, and they cast Wright as a worldly adult woman in ways that might have made listeners uncomfortable if they had realized she was a young teen. As Capouya told me over the phone, "because of the material, they didn't want to necessarily emphasize that she was so young and she was definitely singing above her age." As if to accent this point, on the song, Wright sings, "Just take this advice I give ya / just like a mother."

The song wasn't as risqué as another Reid & Clarke composition on the same album, "Sweet Lovin' Daddy," but the subject matter of "Girls Can't Do What the Guys Do" was arguably more mature. On the hook, Wright laments, "Girls, you can't do guys what the guys do – no – and still be a lady," explicitly highlighting the hypocrisy of dating mores, where male promiscuity is accepted — even celebrated — while women are held to a stifling, puritanical standard. Long before the term "slut shaming" came into common parlance, Wright's song called attention to a sexist double-standard that, sadly, hasn't radically changed in the half century since its recording.

In an unusual move, three years after the original release of "Girls Can't Do What the Guys Do," Atlantic Records placed the song as the b-side to what was becoming Wright's breakout single: "Clean Up Woman." Whether by intention or not, in pairing the two songs on the same 45, it's as if Atlantic wanted to stage a conversation on the themes of the older tune by revisiting them on this emergent hit.

According to Capouya, Reid and Clarke had written the song to be recorded by a male singer as "Clean Up Man," but "when they realized what they had in Betty Wright, they changed the lyrics." "Clean Up Woman" made an instant impression at least two ways. First, its opening guitar lick, supplied by Willie "Little Beaver" Hale, was a perfect ear worm, one of the most recognizable riffs in R&B history. Second, the song's content was equally memorable as another cautionary tale of what happens if a woman strays too far from her paramour:

When he needed love, I was out having fun.
But I found out that all I had done was
Made it easy, for the clean up woman,
To get my man's love, huh huh.

She was only 17 when she recorded "Clean Up Woman," and her real life didn't remotely mirror the drama she sang about. None of this stopped listeners from assuming that the song was somehow autobiographical, even though she was always singing from the point of view of the woman being stolen from. In early April 2020, the TV One docu-series Unsung profiled Wright and she recalled how fans would approach her by yelling out, "Hey clean up woman!" or "Baby sitter!" or "Secretary!" Wright's daughter, Asher Makeba, pops in to say, "The songs were really mature for her so she had to defend who she was."

My indirect introduction to Wright's music came in 1990, when L.A.'s Candyman scored a chart-topper with the salacious rap ballad "Knockin' Boots." Though the song's chorus interpolates Rose Royce's 1977 single, "Ooh Boy," the rest of "Knockin' Boots" draws heavily from samples taken from Wright's 1978 live version of "Tonight Is the Night."

Co-written by Wright herself, the studio version of "Tonight Is The Night" appeared on her 1974 album, Danger High Voltage, recorded when she was 20. Finally, it seemed, her actual age and subject matter were now in alignment as the song shares a first-person perspective from a jittery but willing young woman on the cusp of having sex for the first time. As catchy as songs like "Clean Up Woman" were, those could feel like Wright was playing a role others had written for her. By comparison, on "Tonight Is the Night," there's a candor and aching vulnerability that felt more authentically personal. At times, the song could feel uncomfortably relatable, like reading through someone's diary, as when you hear her sing:

Hope you're not impatient after waiting so very long.
A whole year I put you off with my silly hang-ups.
And we're both old enough to know right from wrong.

In fact, on the more popular live recording of the song, released on the 1978 album Betty Wright Live!, Wright tells the audience, "I never intended recording this song. It was a personal poem, that is until the day my producer happened to thumb through the pages of my notebook."

On that live recording, you can hear Wright's maturation as an artist as the now-24 year old tackles her song with a newfound swagger. On the same introductory monologue — one of the greatest of the 1970s — she even jokes about how her mother confronted her over the song: "I like the music, you know baby, the melody? It's really nice, but I know you not gonna sing that song!"

In the 10 years that separated the Betty Wright of "Girls Can't Do What The Guys Do" and the Betty Wright of "Tonight Is the Night (Live)," fans were given a front row seat to her coming of age in real time, growing from a young teen asked to play a grown-up to being an actual grown-up in full command of her artistic persona. Notably, by the time she was 21, she had became a prolific songwriter in her own right, eventually garnering hundreds of credits on her own songs as well as those for others, the most recent coming earlier this year on "Safe In Your Arms," the lead track on R&B artist Judy Cheeks's Love Dancin' LP.

As noted, these three recordings are merely snapshots from the first decade of Wright's expansive career, a span of time many artists would be jealous of by itself. She would go onto have many more acts, including helping both KC and the Sunshine Band and Gwen and George McCrae get their start and directly mentoring a host of younger Miami talents including DJ Khaled and Trick Daddy.

Betty Wright enjoyed a life and career that could have filled a dozen lifetimes but her death was still a shock. She was only age 66; this too felt ahead of her time.