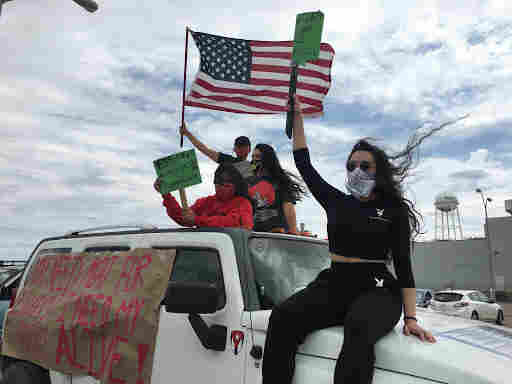 Some Smithfield Foods workers and their families have protested against the company's decision not to close a plant near Crete, Neb., amid the coronavirus pandemic. Christina Stella/NET Radio hide caption

Thousands of meatpacking workers across the country were recently ordered back to work in plants that have seen massive outbreaks of COVID-19. According to recent CDC data reflecting some states' outbreaks through the end of April, at least 5,000 workers have contracted the virus and 20 have died. Other nonprofit organizations have reported many more.

President Trump's recent executive order hasn't stopped more plants from closing down due to COVID-19 concerns, but 14 are slated to reopen this week, spiking fears among some workers that they will inevitably catch the virus. And while Agriculture Secretary Sonny Perdue has promised the agency is "working round the clock" to implement OSHA's recent pandemic safety guidelines for meatpackers, many are concerned those policies don't go far enough to reduce the risk of transmission in plants nationwide.

About a third of Crete, Neb., works at the sprawling Smithfield Foods plant just outside town. The meatpacking company is the area's largest employer — about 2,000 people normally process thousands of hogs per day at the plant into pork chops, bacon, and shoulder cuts for slow cooking.

Both of those numbers have dwindled lately as the plant has struggled to contain its COVID-19 outbreak. Smithfield declined to confirm how many workers are now sick, but according to local health officials, more than 300 local cases are now tied to the plant. At least 1,000 meatpacking workers statewide have contracted the virus and three have died, but Nebraska Gov. Pete Ricketts will not allow the state to release any data regarding outbreaks at specific plants.

Several Smithfield workers say the anxiety around going to work each day has become overwhelming. Many workers and their families feel caught between different tightwires of survival — staying financially afloat and protecting themselves from infection. For Angela Lopez, whose father works at the plant, the stress feeds into every area of her family's life.

"I just think that they should be more considerate for the workers," Lopez said. "Because for a lot of people, this is the only way that they can bring food to the table for their families, and it's not easy for them."

Many hoped the increasing outbreak would compel Smithfield to close the plant temporarily like at other locations in South Dakota and Wisconsin. And for a few hours recently, it seemed their wish came true: reports surfaced two weeks ago about an email sent to workers announcing a closure for sanitization. But hours after the plans leaked, Smithfield changed course, saying the plant would remain open on a half-day schedule. Around 50 employees walked off the production line after hearing the news.

Meatpackers Warn That The Coronavirus Outbreaks Might Lead To Meat Shortages

Meatpackers Warn That The Coronavirus Outbreaks Might Lead To Meat Shortages

A few days later, after coping with another week of more sick coworkers and the lack of communication around the near closure, dozens of employees, advocates and their families felt they had no choice left but to protest pandemic conditions at the plant. In the age of COVID, that means weekly drive-by demonstrations.

The group met for the first time a week ago outside a defunct Shopko downtown to paint slogans on their cars and review the driving route. The protest would follow a tidy loop around Crete, with stops at the Smithfield plant and Main Street: At first glance, the crowd could have passed for the Saturday grocery rush.

David Desi Macias Jr., who's worked at the plant for 11 years, opted for a more personal message across his rear windows: "Our next breath may be our last." After two weeks out of work with COVID-19 and infecting his entire family, he wants the plant to follow through on its initial plans to close.

"All I'm looking for is a three- to five-day shutdown to clean and sanitize," he said. "They say safety's number one, and they care about us — then show us!"

Then Macias Jr. joined a line of honking cars that snaked toward the Smithfield complex, where even more people — some who'd just clocked out, some as young as elementary age — hoisted themselves out of their sunroofs to waive homemade signs and chant: "You want meat? We want life!"

Yesenia Regalado jumped out of her car to waive a sign reading "PPE for all." She's been worried for weeks about the stories her mother and brothers keep bringing home — that they've only been given a face shield to protect themselves after initially having no protective gear at all, and aren't distanced from other workers on the line.

"I don't see how that's safe," Regalado said. "I wake up every single day thinking that it could be my mom, my neighbor, my friend's mom, my old friends...and I get it. Our parents are essential, but they're not dispensable."

Smithfield Foods recently issued a statement addressing "misinformation" around criticisms of the company's COVID-19 policies, including allegations of insufficient PPE for workers. The company admitted it has struggled to source masks for workers ever since the CDC recommended workers start wearing them in early April. At that point, representatives wrote, masks were largely still being rationed for healthcare workers, and the hunt for PPE often led to dead ends.

"Overnight, the need for masks and face shields was thrust upon us and the nation," representatives wrote. "Even today, we are struggling to keep inventories in stock. The suggestion that we were slow to react is simply not true and completely overlooks an inconvenient truth — supplies were not readily available."

Though the company is now providing some PPE for staff, Eric Reeder's phone continues to ring with the voices of scared workers and their families.

"I've literally had probably 25 or 30 calls from men and women calling, their children calling and crying, saying, 'I just can't take it,' because we don't know if they're going to get sick and die," he recalled.

Reeder represents Smithfield Crete workers at Local 293 of the United Food and Commercial Workers, and has heard plenty about the alleged face shields being handed out. He considers those anecdotes evidence of where safety is still falling through the cracks at plants.

"We've been asking for better protections and PPE," Reeder explained. "So they gave them disposable face shields and said, 'Well, we have to wear them all week.'" Plus, Reeder said, they scratch and dirty easily, which limits a worker's line of vision while running meat through a band saw or trimming cuts with sharp knives.

"So what do you think is going to happen when you can't see your hands or where they're at?"

How Can Meatpacking Plants Adapt To The Threat Of COVID-19?

How Can Meatpacking Plants Adapt To The Threat Of COVID-19?

He hoped the new OSHA guidelines for meatpackers would close those kinds of loopholes with stricter safety requirements and federal enforcement. But he thinks they merely encourage companies to adopt policies like screening for symptoms, expanding sick leave, and distancing workers.

"They made it mandatory for these workers to go to work and voluntary for the OSHA protections, which is just like putting a match to a powder keg," he said.

Plus, Reeder is concerned their flexibility could complicate efforts to address workers' complaints going forward. Any labor disputes would normally be settled through mediation with the company — a process that's often drawn out over several weeks. "But in a case where people are dying in these plants, I don't have the luxury of filing a grievance and waiting for resolution two months down the road," he said.

"I need to be able call an agency like OSHA and say, 'This plant's not following [these guidelines] and you need to get an inspector down here ... or threaten them with a fine so that they'll comply,'" Reeder said.

Mark Lauritsen, who runs UFCW's national meatpacking division, agrees that the policies appear to strip companies of liability for not following best practices. In his view, that will affect workers differently based on which plants are or aren't unionized.

"Regardless of what the OSHA [policies] or what this executive order says, our contracts still have language that provides for a safe workplace, and we're going to exercise those contractual rights to the fullest extent," Lauritsen explained. "In the non-union setting, it's gonna be a signal to run your plants however you want to run them."

Some workers without unions behind them are already struggling to hold plants accountable due to the new federal guidelines. An anonymous worker at a Smithfield plant in Milan, Mo., recently tried to sue the company alongside a local advocacy group for not adequately addressing worker safety at the plant.

U.S. District Judge Greg Kays dismissed the lawsuit nearly two weeks later, citing the allegations were ultimately for OSHA to investigate, and that deferring to their judgement "will ensure uniform national enforcement" of the agency's meatpacking policies.

Kays added the plant, which has no publicly known cases of COVID-19, has taken "significant steps" toward implementing safety measures per OSHA's guidelines and thus poses no obvious risk of "irreparable harm" to its employees.

"The Court is not unsympathetic to the threat that COVID-19 presents to the plant's workers," Kays added.

"But in conducting its analysis, the Court must determine whether Plaintiffs will suffer an actual, imminent harm if the injunction is denied. This is not the same as analyzing whether employees risk exposure if they continue to work, and, unfortunately, no one can guarantee health for essential workers — or even the general public — in the middle of this global pandemic."