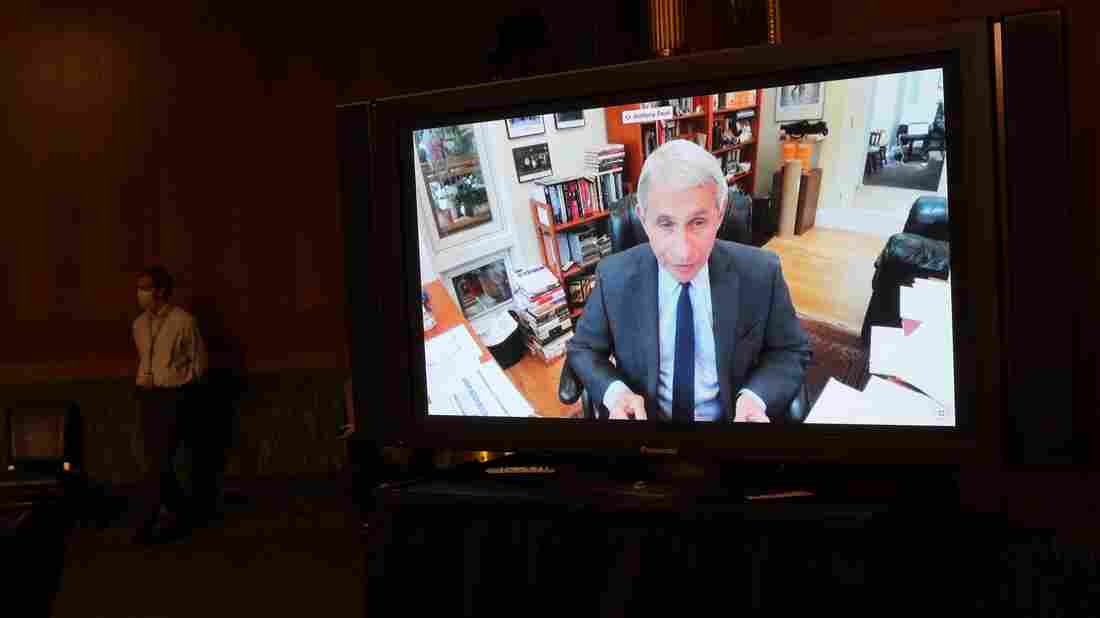 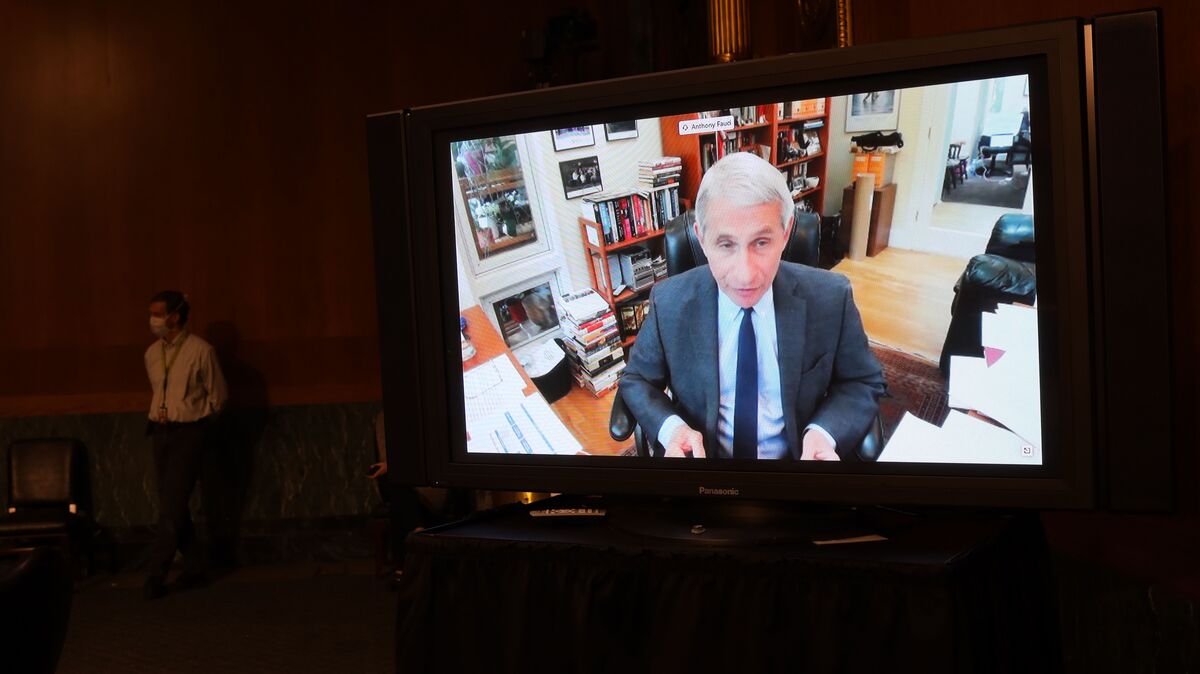 Dr. Anthony Fauci, director of the National Institute of Allergy and Infectious Diseases, speaks remotely Tuesday during a Senate Health, Education, Labor and Pensions Committee hearing on the coronavirus.

Dr. Anthony Fauci, the nation's top infectious disease expert, warned Tuesday of states and localities skipping over federal guidelines while trying to lift restrictions and restart their economies amid the coronavirus pandemic.

Speaking remotely during a unique Senate health committee hearing, Fauci told lawmakers that his concern is that if some areas "jump over" guidelines from the federal government and "prematurely open up," there will be "little spikes that turn into outbreaks."

His statements follow an email he sent to The New York Times on Monday in which he wrote, in part: "If we skip over the checkpoints in the guidelines to 'Open America Again,' then we risk the danger of multiple outbreaks throughout the country. This will not only result in needless suffering and death, but would actually set us back on our quest to return to normal."

The White House guidelines, released in April, call for states or regions to see a downward trajectory of cases or positive tests over two weeks before moving on to a phased reopening.

Miss the hearing? You can watch it here.

Fauci, who's director of the National Institute of Allergy and Infectious Diseases and a key member of the White House coronavirus task force, told lawmakers that this virus will not disappear.

"That is just not going to happen," he said.

Fauci implored states to "go by the guidelines" because otherwise, "the consequences could be really serious." He warned that "there is no doubt" that as mitigation efforts are pulled back, "you will see more cases." He said states have to remain prepared and ready to deal with more cases.

Asked by Sen. Elizabeth Warren of Massachusetts whether the virus is contained, he said it is not.

When asked by committee Chair Lamar Alexander of Tennessee whether there would be coronavirus treatments or a vaccine that could facilitate college students returning to school in the fall, Fauci said he thought that "would be a bridge too far." 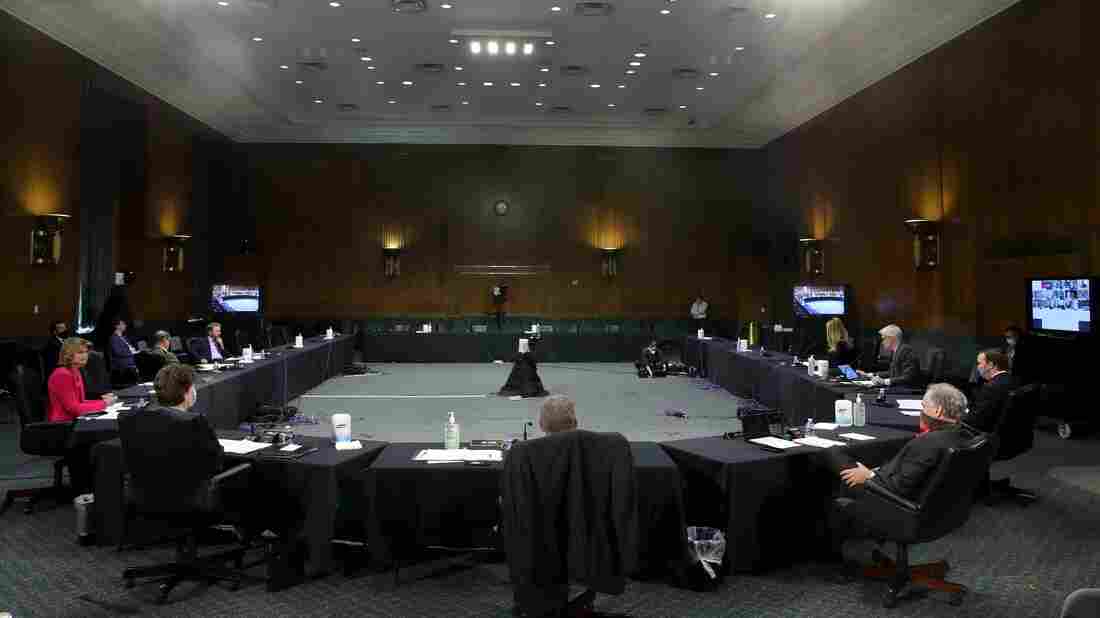 Some senators were in the briefing room for the hearing, while others and the four witnesses joined remotely. Win McNamee/Pool/AFP via Getty Images hide caption 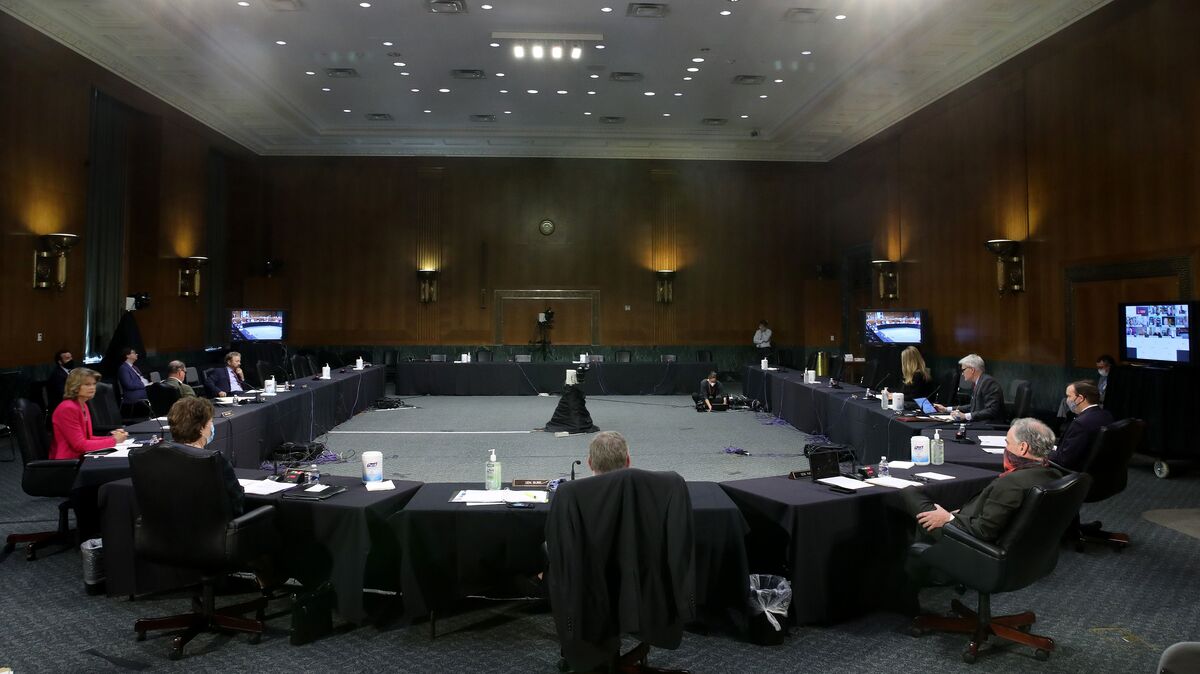 Some senators were in the briefing room for the hearing, while others and the four witnesses joined remotely.

Alexander chaired the hearing remotely from his home in Tennessee (with his dog Rufus in the background on a couch the whole time) because one of his staffers tested positive for COVID-19.

Fauci said there are multiple potential vaccines in development and that he hopes the administration will have some idea whether they work by late fall, early winter.

Dr. and Adm. Brett Giroir, an assistant health secretary who is leading the Trump administration's testing efforts, said during the Senate hearing that there may be the possibility to test students going back to school by the fall.

Redfield in particular talked about contact tracing, and about how his organization is working with local officials to build up capacity to conduct tracing.

Giroir said that as of Tuesday, the United States has conducted more than 9 million coronavirus tests, more than any other country. He noted the importance of testing asymptomatic people, and that he expects the country to be able to do 40 million to 50 million tests a month by September.

Chairman Alexander stressed the need for more widespread testing for the virus.

"All roads back to work and school go through testing," the Republican said in his opening remarks.

Republican Sen. Mitt Romney of Utah came at the testing problem straight on. He noted that while it's nice that the U.S. has passed much-lauded South Korea in total testing, the real issue is when that testing took place. It took place far too late in the U.S., he said, to prevent the tens of thousands of deaths in this country, the way South Korea did by testing early.

"I find our testing record nothing to celebrate," Romney said.

That's been the problem all along. President Trump downplayed the coronavirus for weeks, while South Korea was doing the bulk of its testing. Trump only seemed to take it seriously as the death toll went into the thousands in this country.

In recent days, Trump has again downplayed the importance of testing, but also said during a briefing at the White House on Monday that "we have prevailed" on testing.

Asked when all Americans will be able to get tested every day, as often as officials in the White House are, Trump claimed: "Very soon. I mean, really, very soon."

There is no evidence the country is close to getting everyone tested routinely.

Trump And Pence 'Maintaining Their Distance' For Now

Later, Trump inaccurately said, "If somebody wants to be tested right now, they'll be able to be tested."

Trump and Giroir clarified Monday that everyone who needs a test can get one. And then, Trump added, "Not everybody should get a test, because they should have certain things when they're not feeling right."

Fauci, Redfield and Hahn are currently self-quarantining because of exposure to a White House staffer who tested positive for the coronavirus.

Like Alexander, Patty Murray, who's the ranking Democrat, noted that what's needed in the country is "dramatically more testing," and yet, she said, there's no comprehensive plan to ramp it up and make it free.

Murray, of Washington state, a state that saw an early outbreak of the coronavirus, didn't mince her words about the Trump administration's response to the pandemic, calling it a "disaster all on its own." She cited "delays" and "missteps" that allowed "inaccurate antibody tests to flood the market," longer wait times for personal protective equipment for front-line health care workers and that Trump himself has "promoted dangerous, unproven treatments" and that his White House buried detailed CDC guidance for reopening.

Fauci To Appear Before Senate Panel, But Not 'Trump Haters' In The House, Trump Says

"The Trump administration tossed it in the trash bin for being too prescriptive," Murray said, adding that it's "far from first time" that Trump has tried to "silence experts," and charged that Trump would rather fight "against the truth than this virus."

Alexander said he wants the focus not to be on "finger-pointing" but on what to do for this pandemic going forward and others that could come in the future.

Alexander said "before we spend too much time finger-pointing," consider that "all of us" underestimated this virus. "Even the experts underestimated COVID-19."

At one point, Kentucky Republican Sen. Rand Paul took aim at Fauci, saying he's not the "end all" when it comes to how to deal with the coronavirus.

Fauci, for his part, responded that he never made himself out to be the end all, that his advice is based on science and how to stop a pandemic, that he doesn't give advice about the economy, and that being "humble" is important — for everyone — when it comes to a novel virus that everyone is learning about in real time.