Accessibility links
Why Is There A Coronavirus Test Shortage? One Reason: We Don't Have Enough Swabs Widespread testing for COVID-19 is still not happening in the U.S. Although experts have been urging the federal government since February, it took until late April to ramp up production. 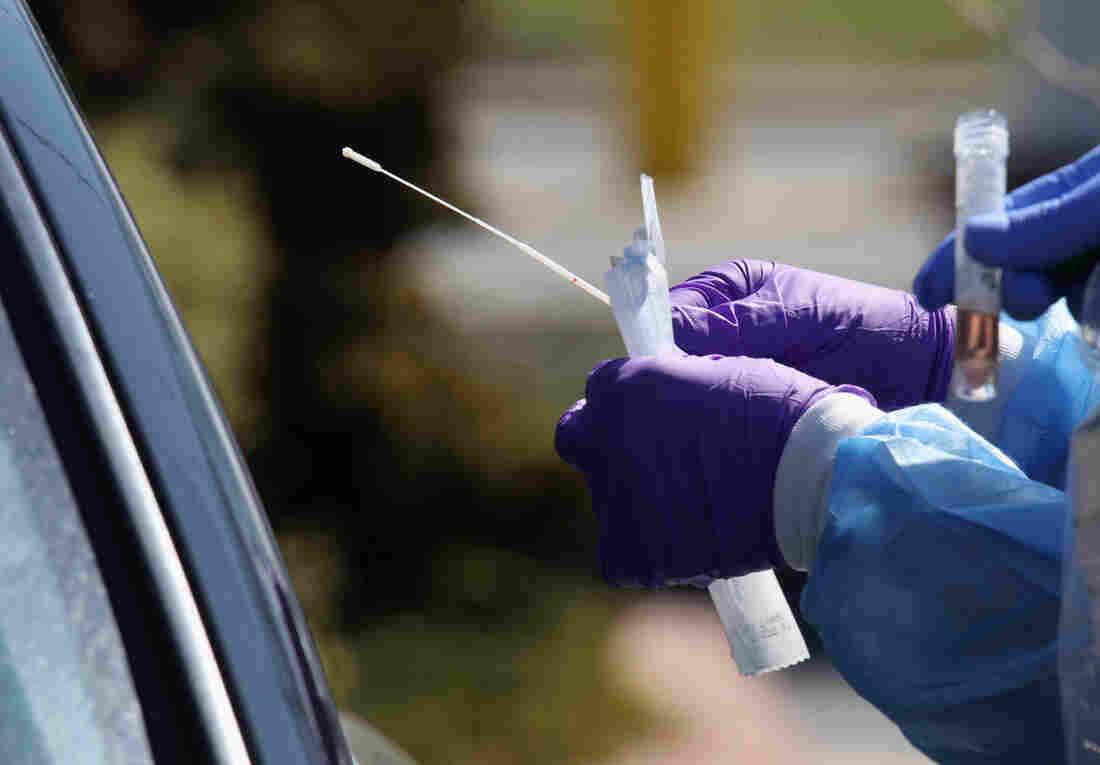 Medical workers prepare to use a swab to administer a coronavirus test at a drive-through center on March 21 in Jericho, N.Y. Bruce Bennett/Getty Images hide caption 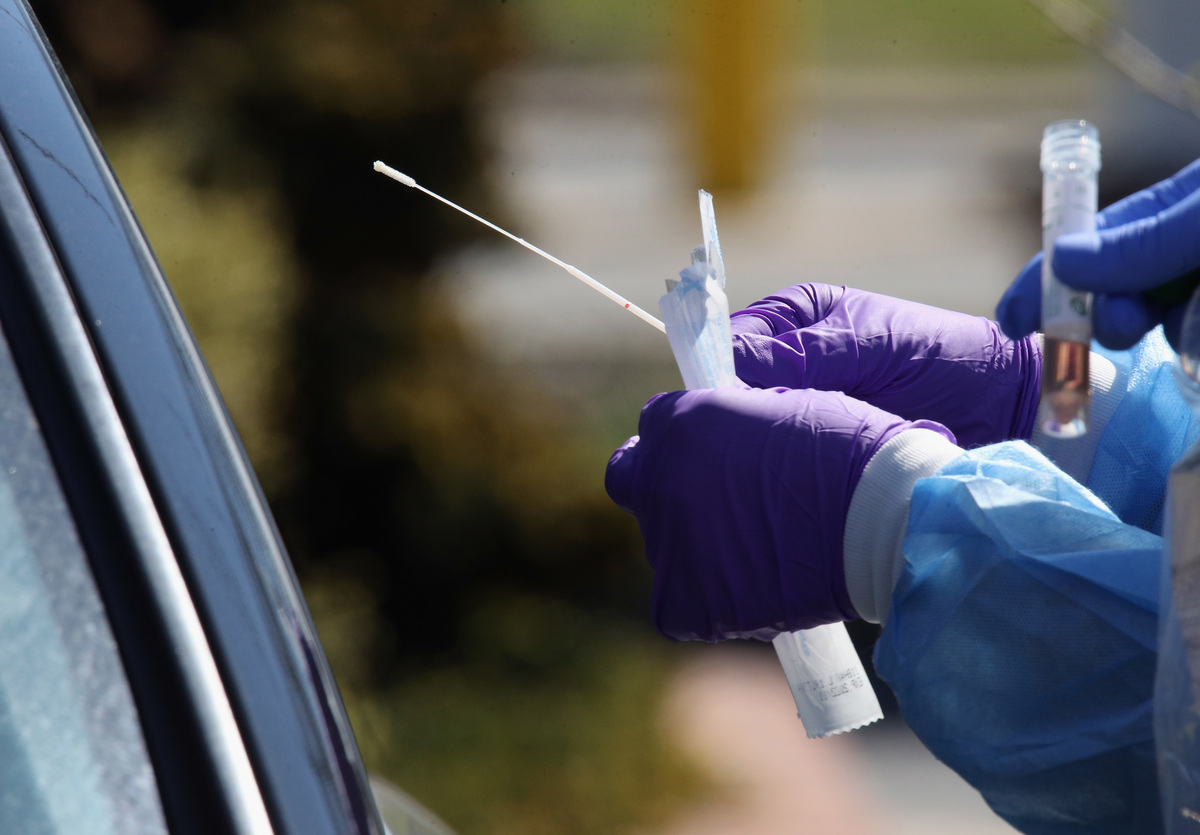 Medical workers prepare to use a swab to administer a coronavirus test at a drive-through center on March 21 in Jericho, N.Y.

But here's the puzzle: Many labs say they have plenty of tests. So what's the disconnect?

But despite warnings about supply shortages by health experts and governors at least as early as February, the federal government took until late April to ramp up domestic production of swabs — a universal ingredient in the most common type of COVID-19 test.

The swab test checks for active infections, unlike an antibody test, which involves drawing blood to check whether the body has recovered from the virus.

Step 1 of a swab test is collecting a sample, and the most common way to do that is by swabbing a patient's nose or throat. Sample collection usually involves a swab, a tube and a chemical solution called "viral transport media," which keeps the sample fresh as it travels to a laboratory. There are dozens of types of FDA-approved swab tests, and the swabbing is usually done at hospitals, community health centers or drive-through testing sites.

Step 2 takes place at a lab. There, genetic material is extracted from the sample. That requires a special machine and chemicals called reagents.

Once the genetic material is extracted, Step 3 occurs: A machine checks whether that genetic material contains any of the coronavirus. If it does, the sample has tested positive for COVID-19.

"A test is not simply a one-component test, but is made up of many different components," said Heather Pierce, senior director for science policy and regulatory counsel at the Association of American Medical Colleges. "If any one of those components is missing or has insufficient quantities, the test can't happen."

The COVID-19 testing process has been plagued by missing components, including swabs, reagents and the chemical solution that keeps samples fresh. Some weeks, there are shortages of some but not others, or one location has them and another doesn't.

Take swabs. They are able to work with any approved swab test. The name suggests something as simple as a Q-tip, but they are more specialized. Nasopharyngeal swabs, as they're called, are considered medical devices and must be long and flexible enough to get all the way through the nose to the back of the throat.

At an April 17 press briefing, President Trump said that in the next few weeks, the federal government would be sending millions of swabs to the states, and he added: "Mostly, it's cotton. It's not a big deal."

But Trump was wrong. Cotton can interfere with test results because it contains its own genetic material, so nasopharyngeal swabs are typically made of polyester, nylon, foam or some other synthetic material. 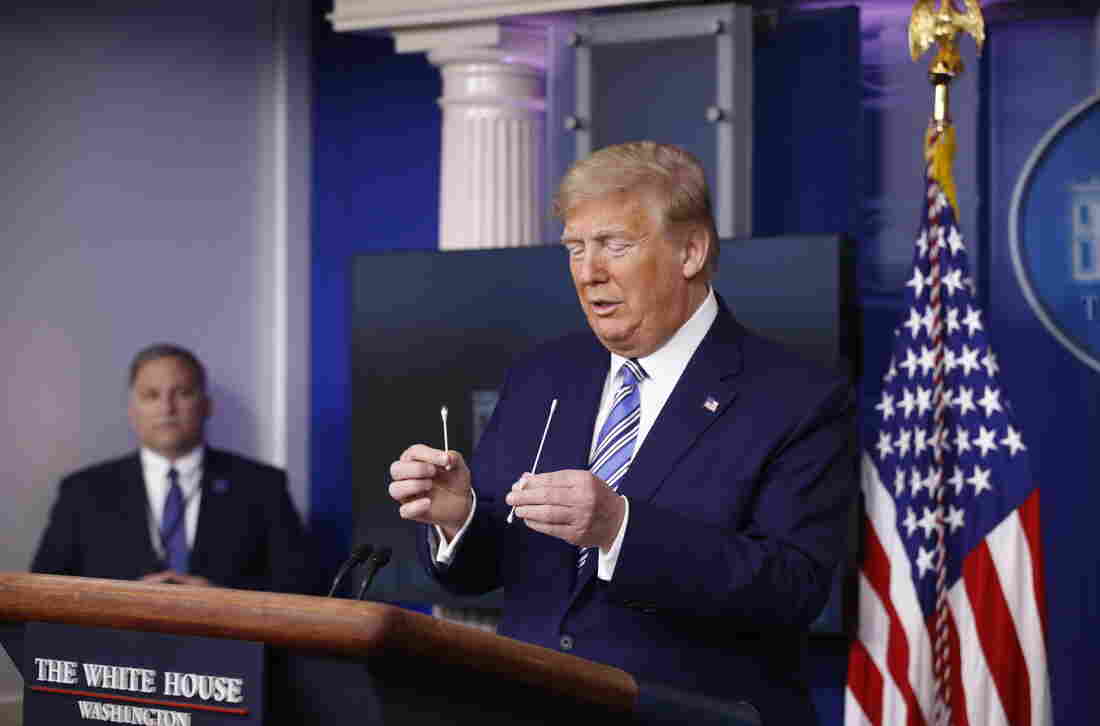 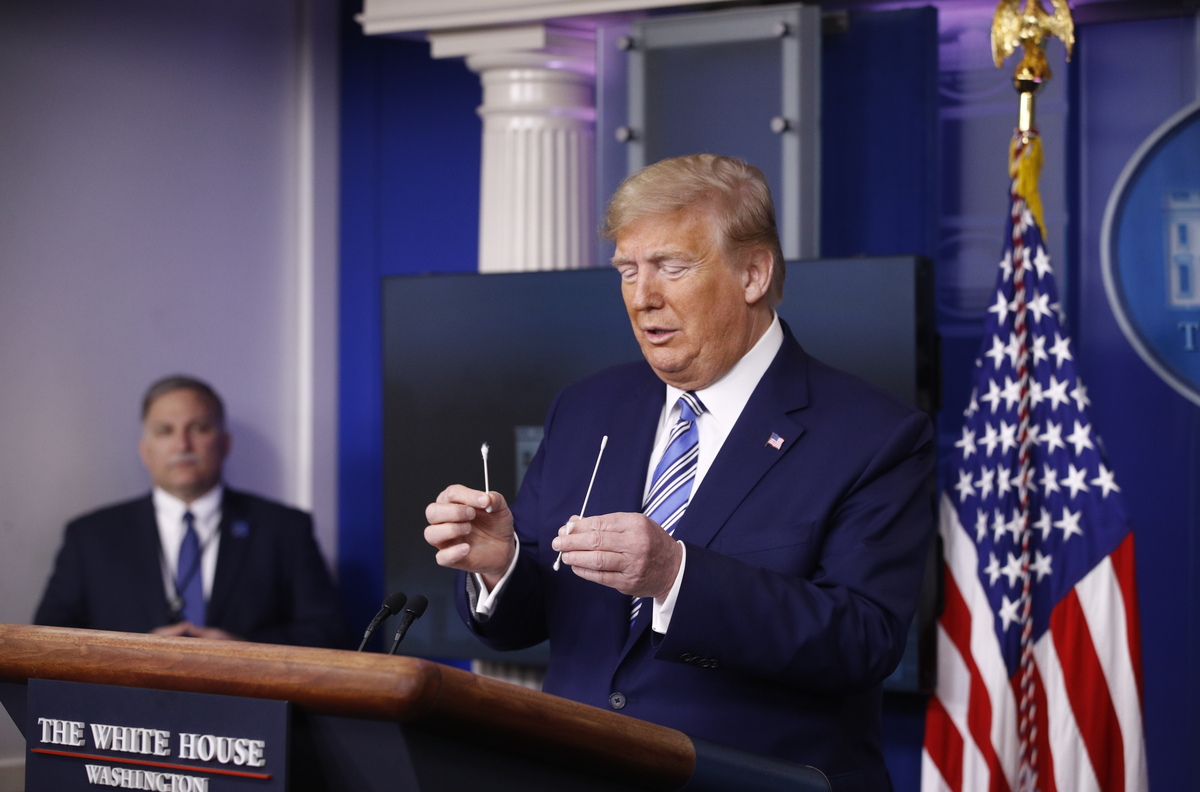 On April 20, Vice President Pence, speaking publicly about a phased reopening of the economy, said this: "By our best estimates, we have enough testing capacity today for every state in America to go to Phase 1."

But "testing capacity" does not necessarily mean testing is happening. Remember: Testing involves not just swabbing, but also having a sample analyzed at a lab. And labs may have the machines that analyze samples, but if there aren't enough swabs, those machines may sit idle. In other words, a shortage of swabs may prevent labs from operating at full testing capacity.

So why is there a shortage of something as seemingly simple as swabs?

For one reason, there had been only two major manufacturers of these swabs worldwide — Puritan Medical Products in Maine and Copan Diagnostics in Italy. When COVID-19 hit and demand for swabs skyrocketed, the companies became overwhelmed and couldn't keep up.

"I don't think the United States was prepared," said Timothy Templet, Puritan's executive vice president of global sales. "That includes us, Puritan. It includes our customers. And it includes the government ... And now it gets really nerve-wracking to think that we may be in this for another couple years." 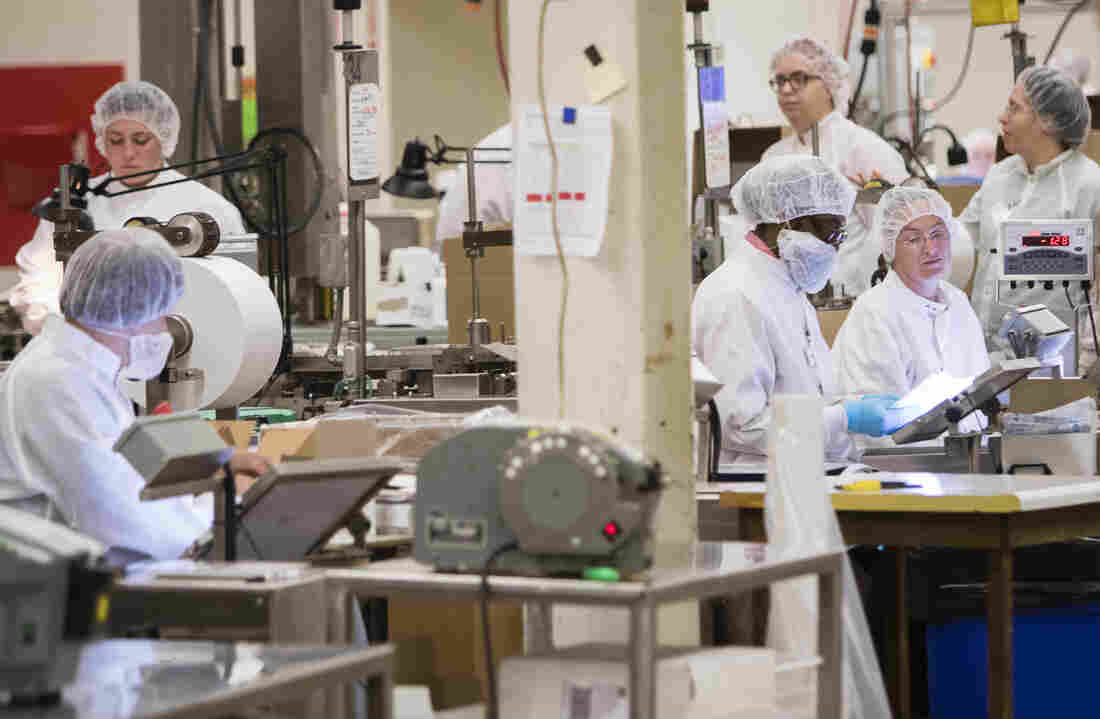 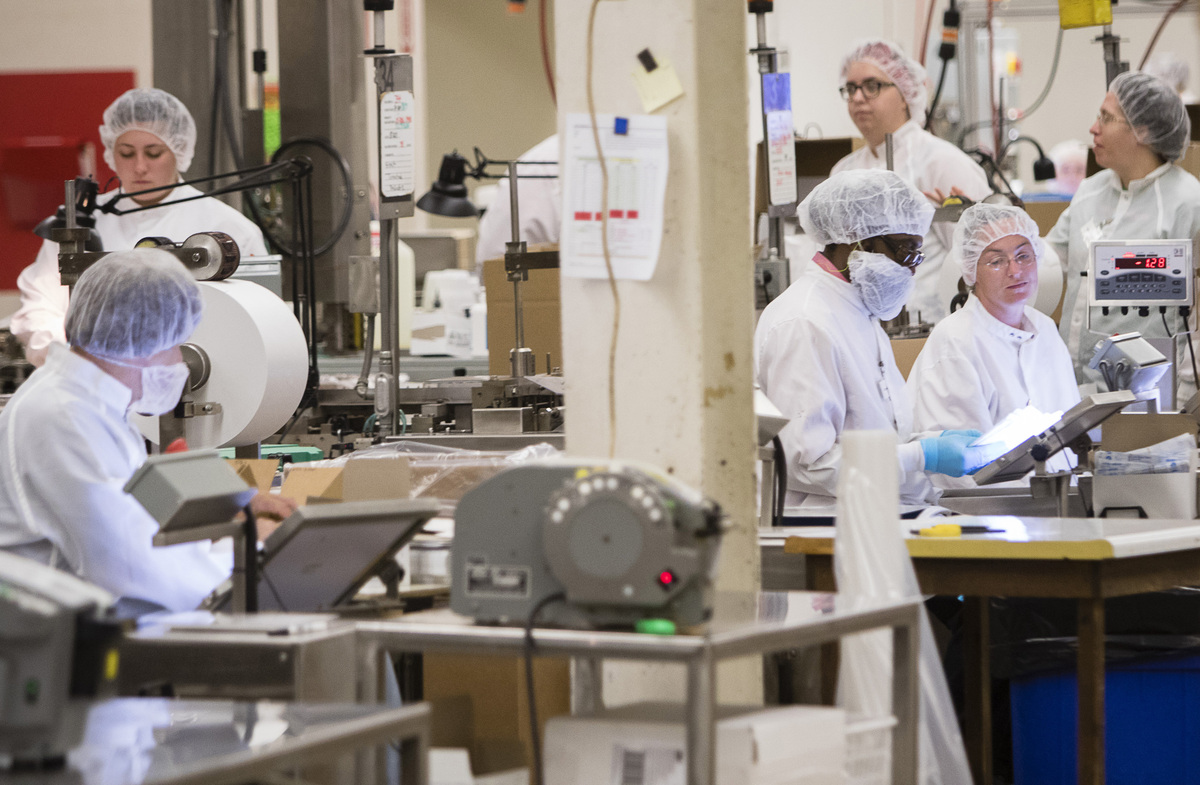 Puritan Medical Products employees work in the Guilford, Maine, plant in 2017. On April 29, 2020, the federal government announced Puritan had been awarded a $75.5 million contract to produce more swabs for coronavirus testing.

The U.S. government could have been amassing swabs in the Strategic National Stockpile, a federal warehouse of medical supplies, but was not.

The government also has the Defense Production Act, a tool the Trump administration used in late March to require General Motors to produce more ventilators for coronavirus patients. But the administration did not act as quickly to use that tool for swab shortages, even though some people were advising that.

"Weeks ago," Washington Gov. Jay Inslee told NPR on April 16, "I spoke to the president and urged him to invoke the Defense Production Act and mobilize the incredible supply chains that the Department of Defense has and to ask them to convert some of their production from other hardware and software to swabs and contact vials and machines that can do analysis. And he did not agree with that assessment, and we lost weeks, frankly."

That was not the first time the federal government had been warned of swab shortages.

On Feb. 12, at a hearing on pandemic preparedness, a group of prominent health experts told a U.S. Senate committee that the country has a testing supply chain problem. On March 16, former FDA commissioner Scott Gottlieb tweeted that "swabs could be a weak link in broadening testing." On March 17, Rhode Island Gov. Gina Raimondo told CNN that "the problem is swabs." During the same time period, there were other public distress calls about supply shortages.

In mid-March, the government acted: It flew shipments of swabs from Italy to the U.S. But that still didn't meet demand, and complaints about shortages were still continuing in mid-April. On April 19, President Trump said he would use the Defense Production Act to increase swab production. On April 29, the government said Puritan Medical Products had been awarded a $75.5 million contract to produce more swabs. 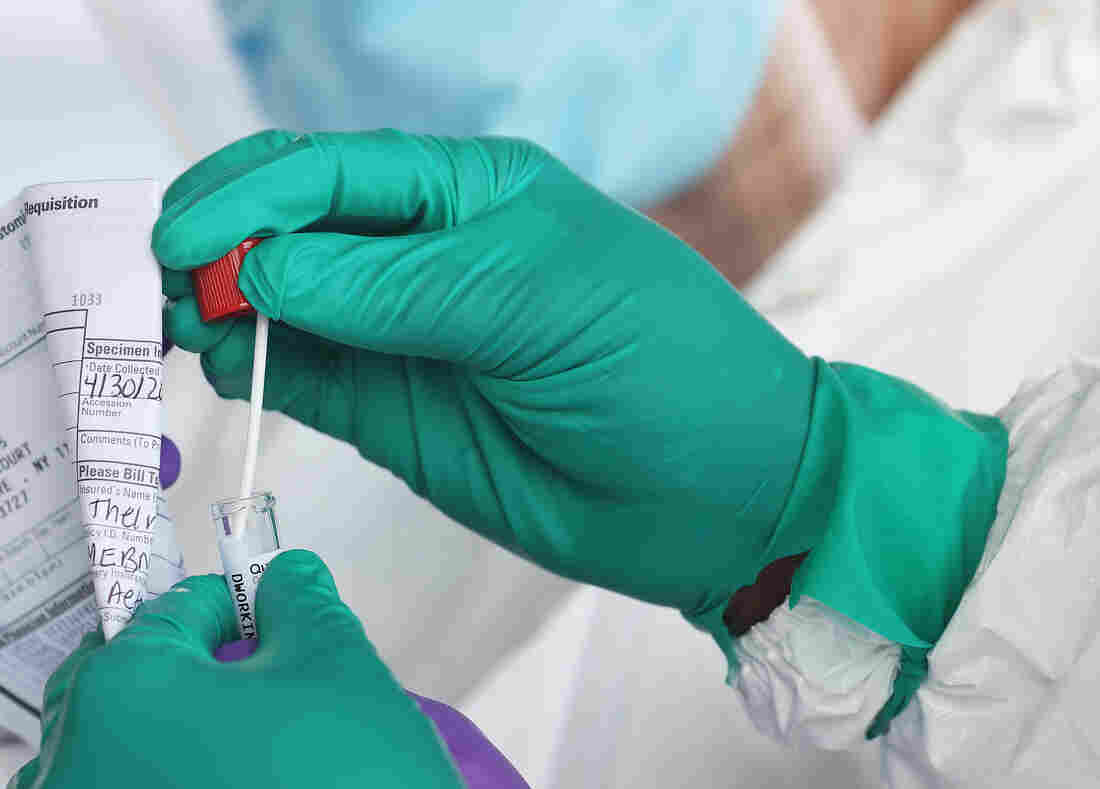 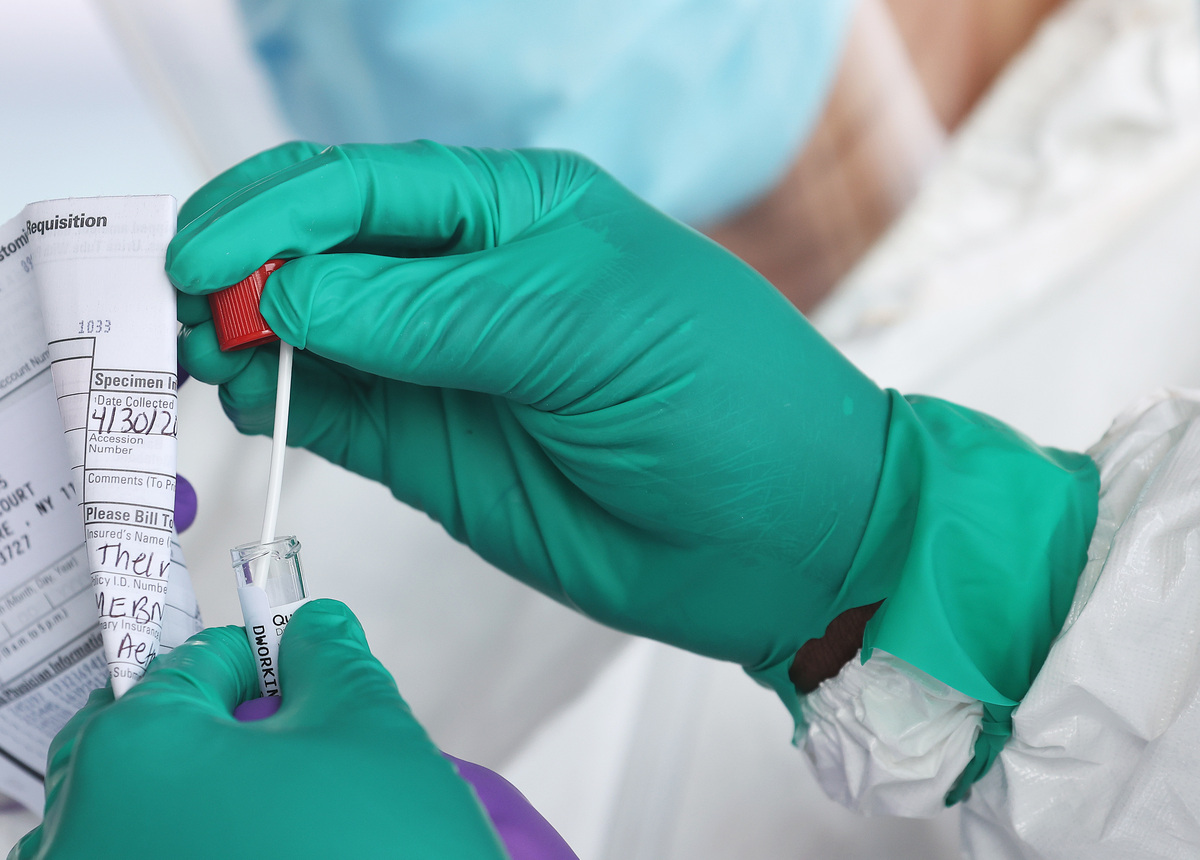 Puritan's goal is to produce at least an additional 20 million swabs a month, and it's building a new factory to do that. But it's hard to say whether that's enough to meet demand because it's difficult to get consensus on how much COVID-19 testing the U.S. should be doing, and how many swabs can be produced.

Consider the experience of the American Society for Microbiology, which asked in mid-April to speak with Dr. Deborah Birx's team on the White House coronavirus task force to find out what was being done to address testing supply shortages — and discovered that the White House was trying to figure out the same thing.

"Something happened that was very surprising," recalled Dr. Robin Patel, the organization's president. "First of all, Ambassador Birx is a wonderful person and has very good insight into the challenges that are happening ... but what they did is they turned around and they asked the American Society for Microbiology to help with this situation. That's not why we were there. We were there asking for information."

So Patel's group gave the coronavirus task force its feedback.

"We are pleased to be able to help," said Patel, noting that the pandemic is a complicated situation and that everyone needs to work together to solve it. "But we were not there to volunteer to help. That was what was surprising — was the ask back to us."

The American Society for Microbiology's experience makes clear that nearly three months into the pandemic, the Trump administration was still struggling to understand the shortage of swabs and other test supplies, and how to fix it.

To help address the shortage, the FDA has approved more types of swabs, and an Ohio company is converting a plant to make swabs. The FDA has also approved a saliva test that does not require a swab.

And this week, the White House said it would send $11 billion to state governments to expand testing and make sure each state has enough testing supplies, although it said it wants to focus on high-risk communities like nursing homes.

So it remains unclear how widespread testing will ever be in the U.S.