Accessibility links
How Hollywood Works From Home: Stay Tuned As TV Shows Get Creative Much of the entertainment industry is shuttered, but some actors are filming themselves from home. In the coming months, "It's hard to know what people will want from TV," showrunner Mike Schur says.

During the pandemic lockdown, what's left of Hollywood production has gone virtual. Late-night TV hosts Trevor Noah, Stephen Colbert and the Jimmys — Fallon and Kimmel — record monologues from their homes. Saturday Night Live at Home, which had its finale over the weekend, had its cast mates and guest stars tape themselves, too.

A special reunion episode of Parks and Recreation that aired recently was also written, shot, directed and edited remotely. Showrunner Mike Schur says he and the director, script supervisor and editors worked from their homes, watching on Zoom as the actors did their own camerawork.

From 'Parks And Recreation,' A Brief But Delightful Return To Pawnee

"We didn't actually fully know what anything looked like until we got the footage back. It was always a little bit of a surprise," Schur says. "There were things that were recorded at the wrong frame rate, the little lights that were attached to the mini-rigs that we sent out kept malfunctioning in the middle of takes. It was a struggle."

In the end, Schur says the episode worked as a one-off since the series always had a "let's put on a show" sensibility. But Schur, who created The Good Place and Brooklyn Nine-Nine and the upcoming series Rutherford Falls, says the do-it-yourself method isn't a long-term solution because making a comedy is a team sport.

"It can't be everyone in his or her own house acting has his or her own hair, makeup, DP [director of photography], rigger, gaffer, grip," Schur says. "It was really fun to do, but it's not a blueprint for anything." 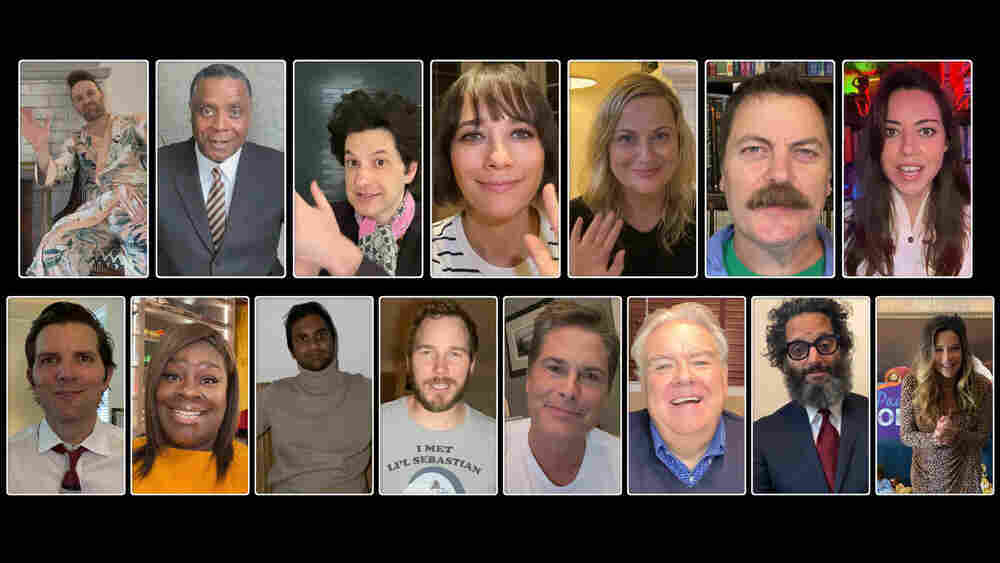 A special reunion episode of Parks and Recreation was written, shot, directed and edited remotely. "It was a struggle," showrunner Mike Schur admits. NBC hide caption 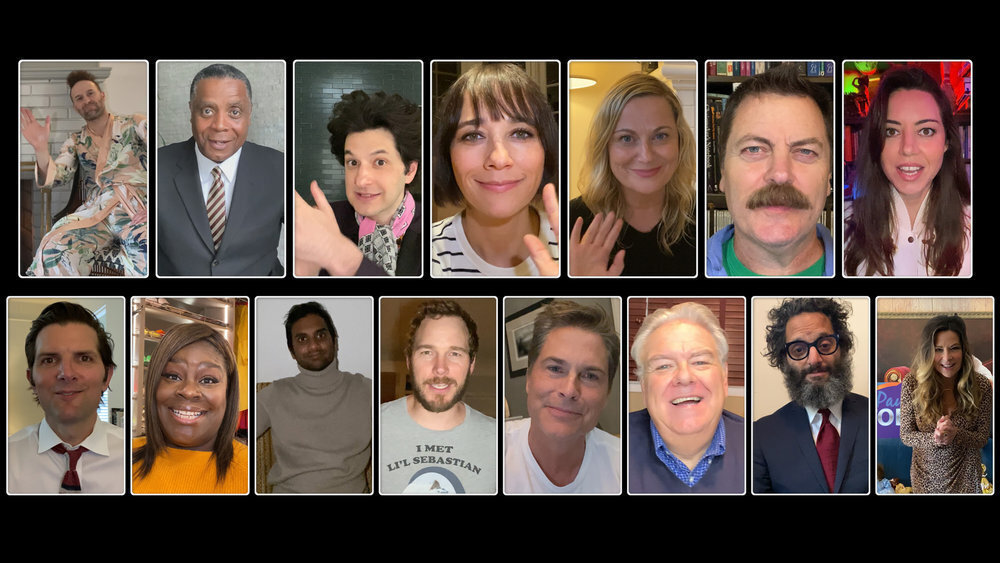 A special reunion episode of Parks and Recreation was written, shot, directed and edited remotely. "It was a struggle," showrunner Mike Schur admits.

Casting director Jennifer Euston can no longer safely audition actors in person at her small New York City office. And she can't scout for talent at the theater, like she did for Orange Is the New Black. But she's got a plan for casting the upcoming Netflix series Social Distance, a scripted show set during the pandemic.

"I have to hire actors that are quarantining together as families, as husband and wife, as brother and sister, any combination of people — and it's not just straight couples," she says, adding that her goal is to add as much diversity to the show as possible. Not just racial and ethnic diversity, but "all shapes, and sizes, and faces, and looks."

You lose a little bit of the fun and the magic of having everybody in the room together and seeing each other. But it's good to remember that we're all fortunate to be working.

One Day at a Time executive producer Gloria Calderon Kellett found an alternative to taping her show on a crowded set in front of a live audience. After her rebooted sitcom had to shut down midseason, she had an idea: "My husband's a cartoonist, so animation is around me all the time. And I just thought maybe we can animate this particular episode."

Kellett says the storyline of this particular episode, set to air in June, has her TV family dealing with the upcoming presidential election. She says it's filled with fantasy sequences, making it easy to animate, but future episodes won't necessarily be cartoons.

Animation is one of the few forms of entertainment still in production. For the series Bob's Burgers, animators in South Korea continue to work. And from their homes in Los Angeles, writers and sisters Wendy and Lizzie Molyneux work in the show's virtual writers' room.

How COVID-19 Is Fundamentally Changing The TV Business

How COVID-19 Is Fundamentally Changing The TV Business

"You lose a little bit of the fun and the magic of having everybody in the room together and seeing each other," Lizzie Molyneux says. "But it's good to remember that we're all fortunate to be working."

The Molyneux sisters are also co-executive producers of an upcoming animated sitcom, The Great North. The cast, which features the voices of Megan Mullally and Will Forte, recently tested out lines during an online table read.

"Normally you get the big laughs from the room, but we had everyone other than our actors muted so there wouldn't be a lot of noise," Wendy Molyneux says. "But the actors were nice enough to laugh at the jokes themselves as it went along. So that helped it have the feeling of: We're not saying jokes into an absolute vacuum.''

The Show Must Go Online: Theaters Closed By COVID-19 Get Creative

TV writers are now wrestling with how future storylines can deal with the coronavirus pandemic and an unknown future. Schur says his showrunner wife, J.J. Philbin, is waiting to see if her sitcom, Single Parents, gets picked up for another season.

"Her daily question is: 'When we come back, are these people living in this world?' Do you ignore it, or do you run right at it?" he says. "It's hard to know what people will want from TV, whether they'll want pure escapism or whether they'll want a sort of reflection of their own reality."

Audiences may already be tired of watching actors in their living rooms or in mock Zoom meetings. Is it time to innovate new special effects or bring back canned laugh tracks? Stay tuned.