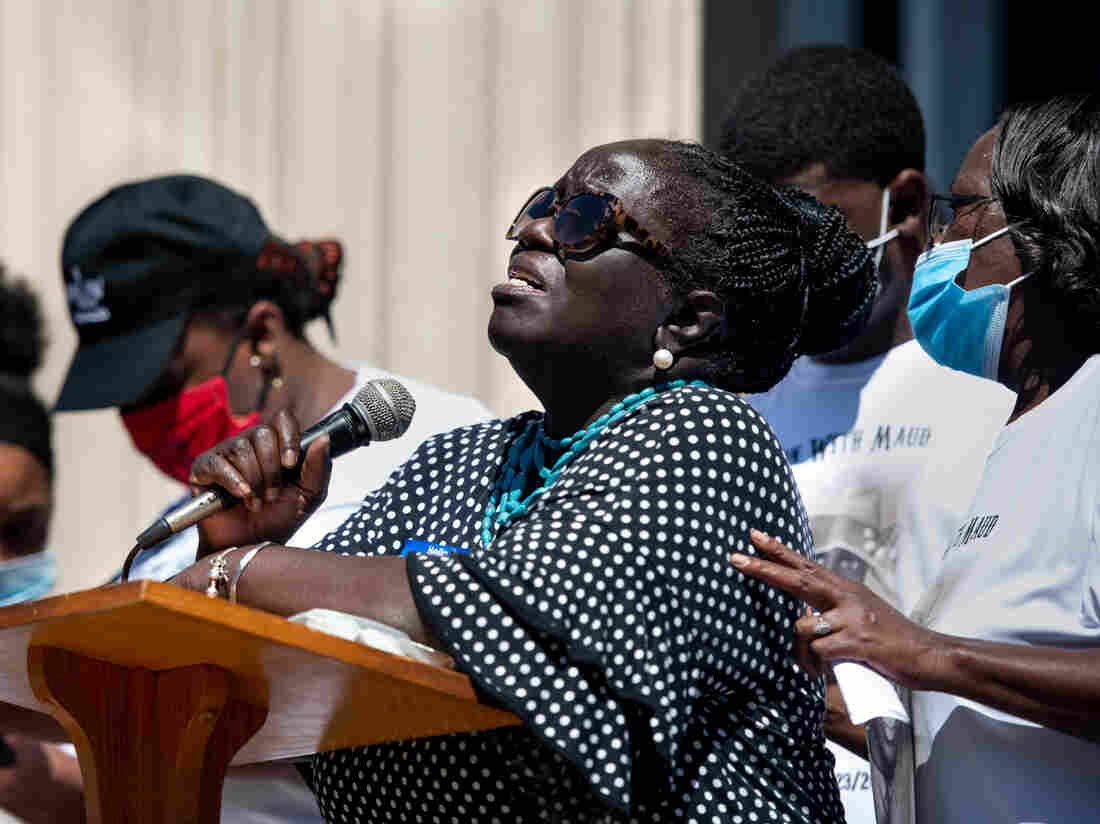 Kimberly Cummings speaks to demonstrators at the Glynn County Courthouse on May 8 in Brunswick, Ga., during a protest over the fatal shooting of her nephew, Ahmaud Arbery. Sean Rayford/Getty Images hide caption 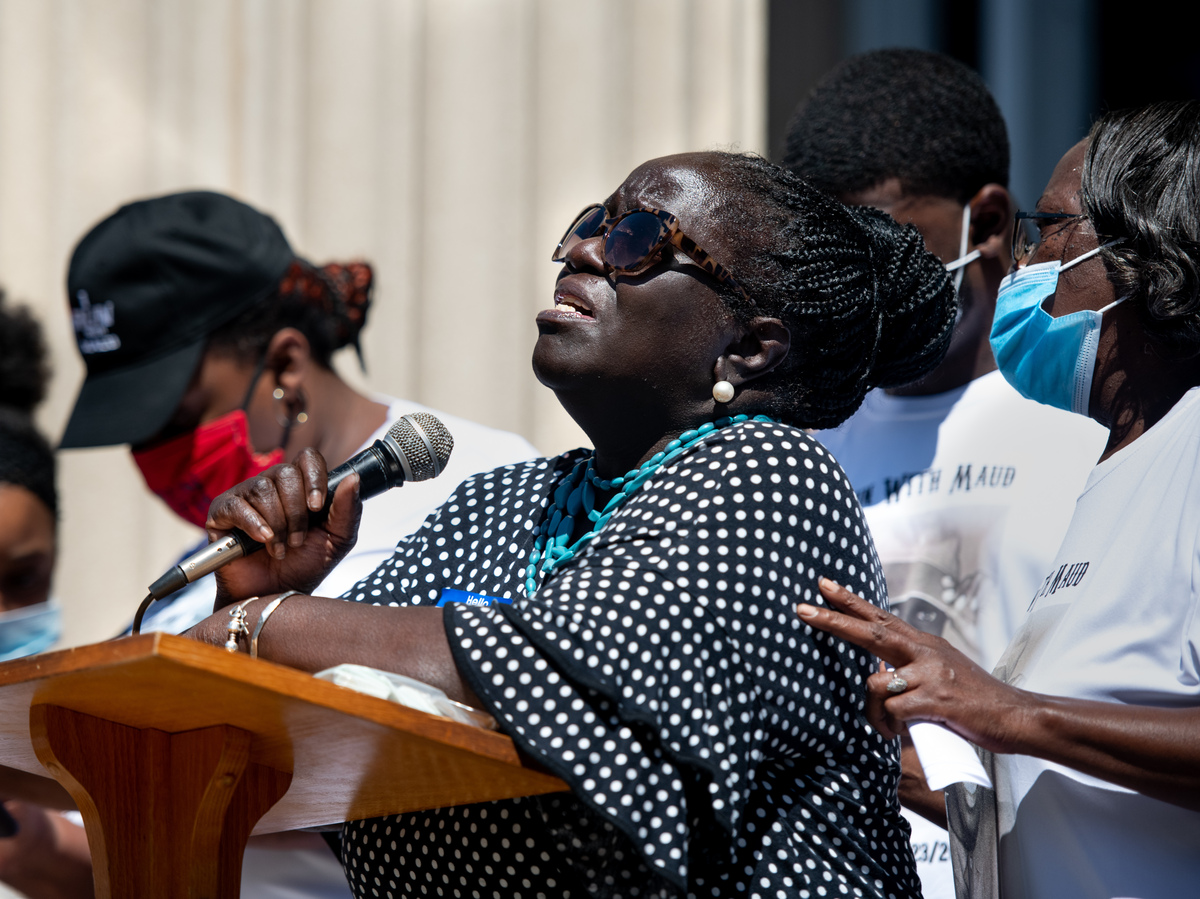 Kimberly Cummings speaks to demonstrators at the Glynn County Courthouse on May 8 in Brunswick, Ga., during a protest over the fatal shooting of her nephew, Ahmaud Arbery.

A day after naming a new lead prosecutor in the murder case of Ahmaud Arbery, Georgia Attorney General Chris Carr said he has asked the Georgia Bureau of Investigation to look into the actions of two district attorneys and how they handled the case.

The investigation into the killing of Arbery, a 25-year-old black man who was shot and killed while jogging in a Brunswick, Ga., neighborhood, had stalled in the 10 weeks following his death on Feb. 23.

In a letter dated May 11 to GBI Director Vic Reynolds, the state attorney general's office asked for an investigation "involving possible prosecutorial misconduct." It also stated that "actions of these offices in possibly misrepresenting or failing to disclose information ... may have constituted unprofessional conduct" or other criminal offenses.

"When a district attorney is unable to take on a case due to a conflict, our office must appoint another prosecutor to handle the case," Carr said in a statement on Tuesday.

"Unfortunately, many questions and concerns have arisen regarding, among other things, the communications between and actions taken by the District Attorneys of the Brunswick and Waycross Circuits," he added. "As a result, we have requested the GBI to review in order to determine whether the process was undermined in any way."

The attorney general also asked the U.S. Justice Department over the weekend to investigate local authorities' handling of the case.

Since Arbery's fatal shooting in February, Brunswick Judicial Circuit District Attorney Jackie Johnson recused herself from the case, citing a conflict of interest because she previously worked with one of the suspects.

George Barnhill of the Waycross Judicial Circuit, who took over as lead prosecutor after Johnson stepped aside, also eventually recused himself.

He did so at the request of the Arbery family, who said Barnhill also had a conflict because his son is an assistant district attorney in Johnson's office, according to Georgia Public Broadcasting.

The case has rapidly accelerated since last week's release of cellphone video that appeared to capture Arbery's deadly encounter with two white men, Gregory McMichael, 64, and his son Travis McMichael, 34.

The McMichaels were arrested last week and charged with murder and aggravated assault.

On Monday, the U.S. Justice Department said it was "assessing all of the evidence to determine whether federal hate crimes charges are appropriate."

The Georgia attorney general announced the same day that Joyette Holmes, district attorney of the Cobb County Judicial Circuit and the first black woman to serve in that position, is taking over as lead prosecutor in the Arbery case.

Prosecutor "held onto the case" for weeks

The documentation attached to the letter sent by Carr's office to Reynolds sheds more light on the potential conflicts of interest and perhaps why no arrest was made the weeks immediately following Arbery's death.

The state attorney general's office said not long after Barnhill took over the case, both Barnhill and Johnson became aware that Barnhill's son had worked with Gregory McMichael in prosecuting a previous case against Arbery. McMichael had been an investigator with Johnson's office.

"Mr. Barnhill, however, held onto the case for several more weeks after making the discovery," the attorney general's office said.

It added it was unaware, because the information had not been disclosed, that prior to his appointment as prosecutor, Barnhill had "already provided an opinion" in the Arbery case.

He told the Glynn County Police Department on Feb. 24, the day after the shooting, he did not see grounds for an arrest.

In correspondence to Glynn County Police Capt. Tom Jump, Barnhill said the McMichaels and a third man were following "in hot pursuit" of someone they thought was a burglar. "It appears," Barnhill wrote, "their intent was to stop and hold this criminal suspect until law enforcement arrived."

Travis McMichael was carrying a shotgun and his father had a .357 Magnum, according to the Glynn County Police Department incident report.

"Given the fact Arbery initiated the fight, at the point Arbery grabbed the shotgun, under Georgia Law, McMichael was allowed to use deadly force to protect himself," Barnhill wrote.

An autopsy report made available by the Georgia Bureau of Investigation concluded that Arbery "died of multiple shotgun wounds," noting that he was shot three times, once in the wrist and twice in the chest.

Georgia is one of four states having no hate crime laws. The others are Arkansas, South Carolina and Wyoming.

Hours after the Georgia Bureau of Investigation confirmed it had been asked to look into handling of the Arbery investigation, state lawmakers held a press conference in Brunswick, calling for the passage of a hate crime bill.

As GPB reports, the state's House of Representatives passed a measure last year, but it has stalled in the Senate. Lawmakers announced Tuesday the measure will be renamed after Arbery.

One state representative is also calling for a measure that would eliminate Georgia's citizen's arrest law.

Reynolds, the director of the Georgia Bureau of Investigation, said on Friday that more arrests in the Arbery case are possible.

He added the investigation is ongoing. It includes looking into the person who shot the cellphone footage of the McMichaels' encounter with Arbery.