Accessibility links
Americans Are Eating At Home And Food Is Costing More The latest inflation data offers a snapshot of Americans' new pandemic spending habits. Prices are down for most goods and services but up sharply for groceries. 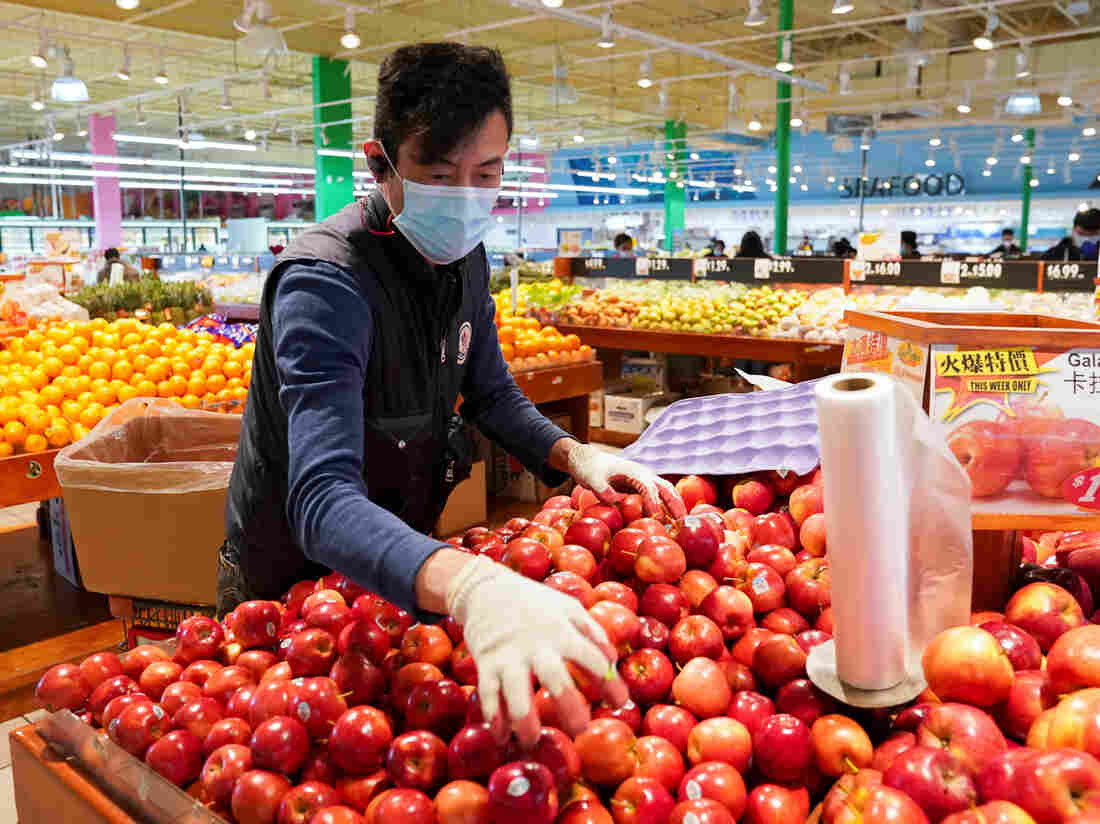 The latest inflation data offers a snapshot of Americans' new pandemic spending habits. Prices are down for most goods and services but up sharply for groceries. Kevin Lamarque/Reuters hide caption 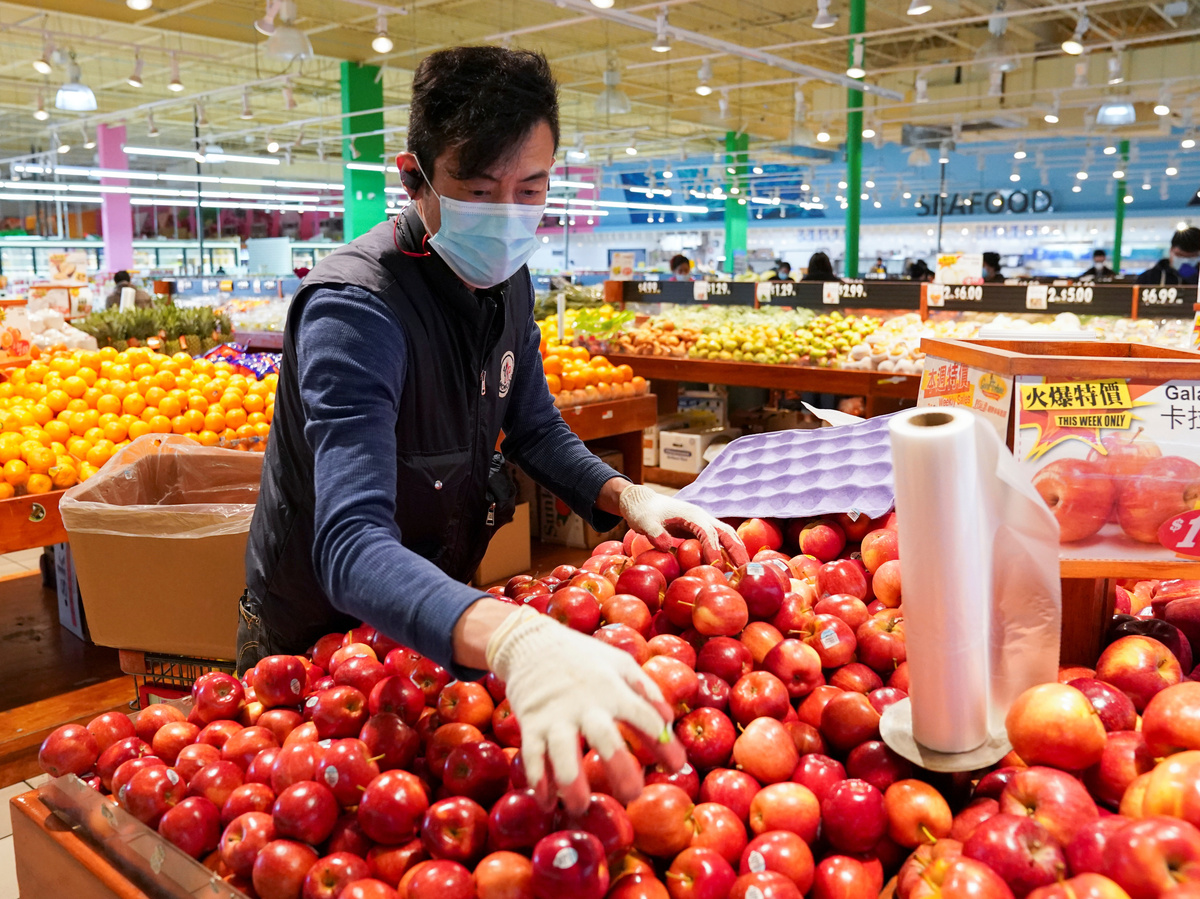 The latest inflation data offers a snapshot of Americans' new pandemic spending habits. Prices are down for most goods and services but up sharply for groceries.

Food prices have jumped the most since 1974, when double-digit inflation became a national concern. But inflation isn't a worry this time as prices for just about everything else are diving.

New inflation numbers out Tuesday from the Labor Department offer a window on how consumers are coping in the COVID-19 era. And the bottom line is that we're snacking more — and paying more for a lot of food — as we shop more at our local grocery stores.

Overall, consumer prices were down 0.8% last month — the sharpest drop since the Great Recession in 2008. But food prices at the grocery store rose 2.6% — the biggest jump in nearly 50 years.

A Pound Of Flour To Go? Restaurants Are Selling Groceries Now

The price of pasta and rice bubbled up 2.5% in April. Hamburger prices ground up 4.8%. And anyone who bought cookies had to lay out 5.1% more dough.

Americans had grown used to spending more than half their food budgets on meals eaten outside the home. But that changed abruptly when the coronavirus pandemic hit. Restaurants closed their doors, and families were forced to cook for themselves.

"We saw an immediate, drastic decrease in expenditures away from home and an increase in the expenditures that we made at the grocery store," said David Ortega, a food economist at Michigan State University.

Ortega sees the change in his own habits. Instead of buying a prepared coffee at the campus bagel shop, he's making his own coffee at home with store-bought beans. He's also shopping for his wife and 2-year-old daughter.

"Yep, I have to now go to the grocery store and make sure we have snacks and goldfish and crackers and just about everything that's going up in price," Ortega said.

There's little evidence that people's overall food consumption has increased (although the price of snacks jumped 3.8% last month). But where and what we're eating has shifted. And that's created some costly kinks in the supply chain.

Ortega warned that beef and pork prices are likely to climb in the weeks ahead, as a result of bottlenecks at slaughterhouses, which have become hot spots for coronavirus infections.

Most of us aren't driving much, so gasoline prices tumbled 20.6% last month. The price of auto insurance also dropped in April, by 7.2% — more than any other month on record.

Kevelighan warns, however, that with fewer cars on the road, some people are driving faster. That means the accidents that do happen are often more costly.

"In fact, people are driving more recklessly at this time. And so that means we're having more injuries and greater damage," he said.

The inflation report tells us more about how our consumption patterns have changed during the pandemic.

As demand for toilet paper soared, household paper prices jumped 4.5% last month. There are a handful of other categories where prices rose — including hospital care (up 0.5%) and funerals (up 0.3%).

But while Americans are spending more on necessities like pasta and toilet paper, they're cutting back on everything else.

"Accordingly, prices are falling. Apparel was down on the month again. Airline fares are plummeting. Hotel prices [are] down," said Kathy Bostjancic, chief U.S. financial economist for Oxford Economics.

The price of used cars dropped 0.4% last month and could fall further if rental car companies decide they have too many cars and sell some of their surplus. There could be some bargains on the used car lot. But with millions of Americans suddenly out of work, it's not clear who will want to buy.

"Therein lies the issue," Bostjancic said. "And that's why you're seeing across the consumer spectrum deep discounting."

If you take out volatile food and gasoline prices, the cost of everything else fell 0.4% last month. Over the last year, these so-called "core prices" rose just 1.4%.

That suggests the government could afford to keep borrowing and spending money on emergency relief programs without fear of runaway prices.

"Inflation is the least of our worries right now," Bostjancic said.