Accessibility links
Your Boss Is Watching You: Work-From-Home Boom Leads To More Surveillance With more people now working from home, employers are increasingly relying on tracking software to monitor what employees do when they're on the clock. 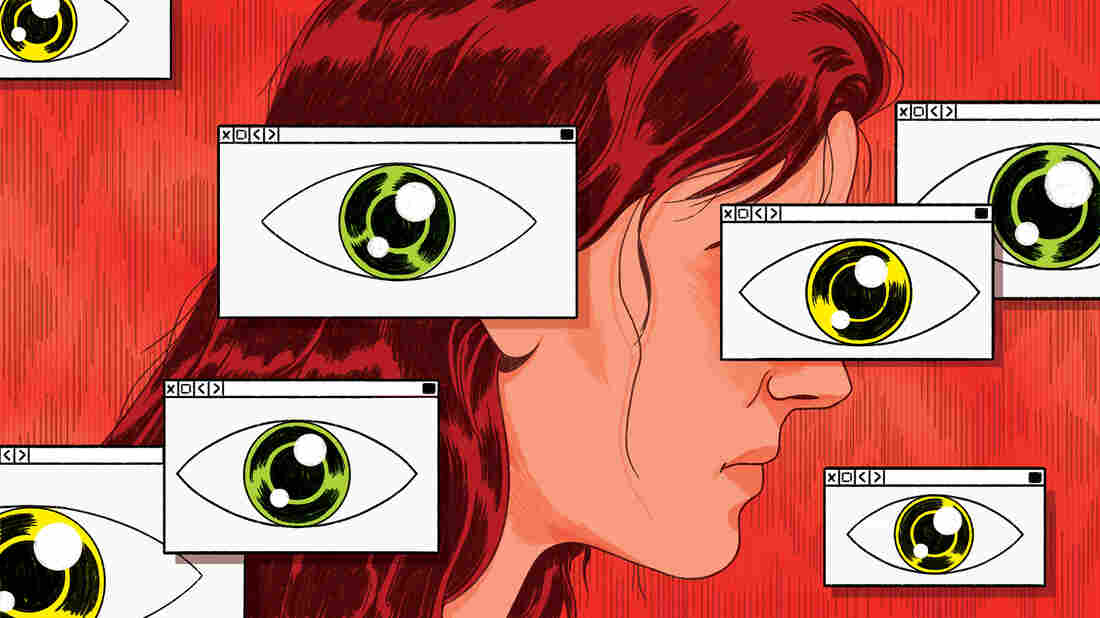 With more people working remotely, companies are turning to technology that tracks what employees are doing all day on their computers. Some workers say they feel like their privacy is being compromised. Jackie Ferrentino for NPR hide caption 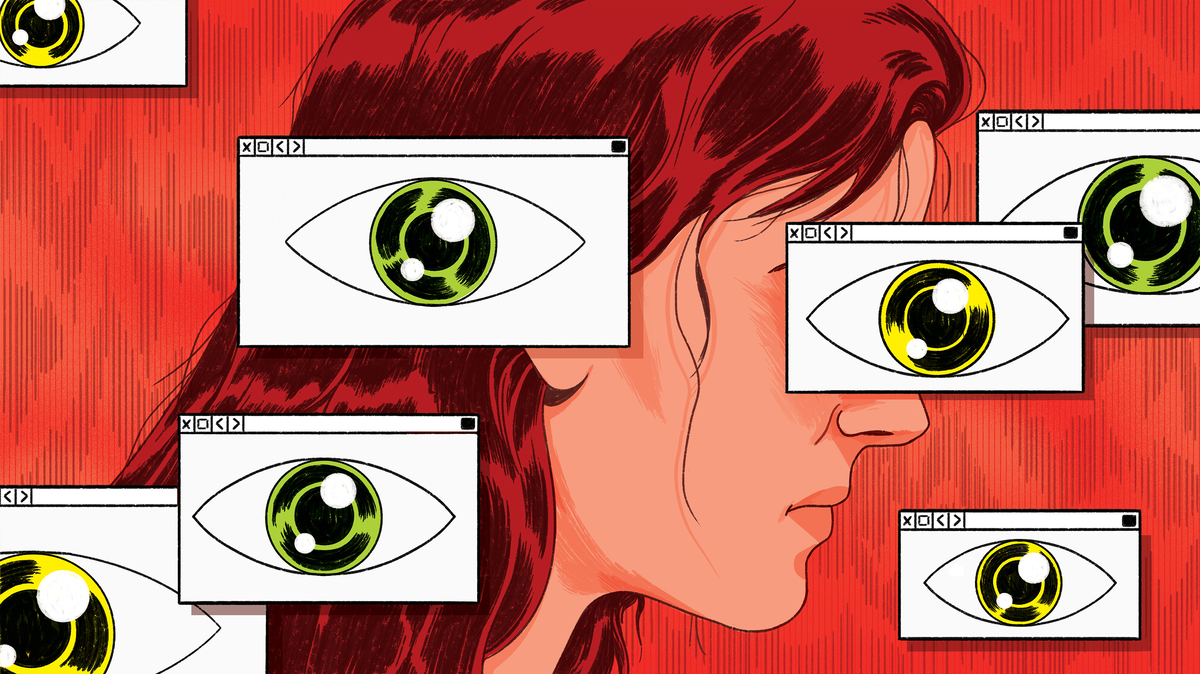 With more people working remotely, companies are turning to technology that tracks what employees are doing all day on their computers. Some workers say they feel like their privacy is being compromised.

After two weeks of working from her Brooklyn apartment, a 25-year-old e-commerce worker received a staffwide email from her company: Employees were to install software called Hubstaff immediately on their personal computers so it could track their mouse movements and keyboard strokes, and record the webpages they visited.

They also had to download an app called TSheets to their phones to keep tabs on their whereabouts during work hours.

"There are five of us. And we always came to work. We always came on time. There was no reason to start location-tracking us," the woman told NPR. She spoke on the condition of anonymity, fearing she could lose her job.

Company emails that she provided to NPR show her employer believed the tracking software would improve the team's productivity and efficiency while everyone was working from home.

Such rationales are increasingly ringing throughout workplaces nationwide.

The coronavirus pandemic has forced about a third of U.S. workers to do their jobs from home. In turn, companies are ramping up the use of software to monitor what their employees do all day.

Privacy advocates and some workers said they worry that the intensified tracking brought upon by the coronavirus will normalize workplace surveillance and that this type of digital supervision will persist when workers return to offices.

Just ask a woman who works in marketing at a small company in Minnesota. She also spoke to NPR anonymously out of fear her employer would retaliate against her for speaking out.

Her employer has started using software called Time Doctor. It downloads videos of employees' screens while they work. It also can enable a computer's webcam to take a picture of the employee every 10 minutes.

"If you're idle for a few minutes, if you go to the bathroom or whatever, a pop-up will come up and it'll say, 'You have 60 seconds to start working again or we're going to pause your time,' " the woman said.

That meant stepping away from her computer briefly could cut into her pay.

"I just feel like crap. I feel like I'm not trusted. I feel ashamed of myself," she said, referring to a short break she took to speak with a colleague by phone. "My co-workers were really, really upset. But everyone was too afraid to say anything."

Critics call this kind of tracking software "tattleware." But Brad Miller, who runs the Connecticut-based company Awareness Technologies, bristles at that description.

"If you're not working or doing something wrong, then I guess it will tattle on you, but I don't think that's really how companies that are buying [the software] think of it as," Miller said.

Since the COVID-19 outbreak, Miller said that Awareness Technologies' business has tripled. Its programs for managers keep a record of every task employees are doing on their computers. Each worker then gets assigned a productivity score. Every employee is ranked accordingly.

"Are they generally active on programs and websites that I would consider productive like Excel, PowerPoint, Word, email, as opposed to YouTube or Facebook?" Miller asked. "That's primarily what our customers are looking to know."

Dave Nevogt, the CEO of Hubstaff, said demand has tripled for his company's monitoring software, too.

"We have seen a massive increase in the number of people needing our platform," Nevogt told NPR. "Remote work has gotten a huge boost as everyone has been forced to work outside of the office, and we feel like these changes may be here for good."

For bosses, keeping up with worker productivity has always been a give-and-take. But in the office, it is much easier to figure out if someone is doing a job well. Now tracking technology is taking the place of a manager's eyes. Miller said when the software runs on a homebound employee's computer, it gives the worker an added incentive not to slack off.

"I think if people know it's happening, then people will act better than they would otherwise, because we all act better when someone is watching," Miller said.

Alison Green, who writes the syndicated advice column Ask a Manager, has a different view.

She has been flooded with questions from workers who feel icky about their bosses quantifying their keystrokes and how many emails they fire off each day.

"And then there's a lower-tech version of that, which is people whose managers are asking them to stay on video all day long so they can watch over them every minute of the day, which is very intrusive," Green said.

It may feel intrusive, but it is not illegal, said Paul Stephens, director of policy and advocacy with Privacy Rights Clearinghouse, a consumer advocacy nonprofit.

While the Fourth Amendment protects against unreasonable searches and seizures by the government, employers are not running afoul of any federal laws by tracking what their workers are doing all day through surveillance software, he said.

"There's not a constitutional issue here," Stephens said. "There aren't a whole lot of legal protections for employees who are being monitored."

Stephens said state laws vary over whether companies must even tell workers whether they're using tracking software. Some states do not require that workers be notified first.

And with few legal barriers, employers who turn to this software during the pandemic may choose to keep using it even after work-from-home orders are lifted, he said.

"Once the employer has made the investment in acquiring and installing the software, it's not likely that they're going to remove it," Stephens said. "This has for a long time been true, but maybe now more than ever it's safe to assume that everything you're doing is being watched and tracked by your employer."

Back in Brooklyn, the woman who works for the e-commerce startup said her employer's order to download Hubstaff and TSheets has strained relations between employees and their bosses.

"It has really destroyed morale for everyone," she said. "And everyone has since kind of taken a step back and said, 'All right, if this is how they're going to treat us, why go the extra mile?' Because clearly it doesn't matter to them."

Rather than download the software on her computer, she opted out. She's gone on unpaid leave until the office reopens. But the experience has soured her on her company. She's now hunting for a new job.

"It's not worth it for me right now to sacrifice my personal privacy and all my data for a paycheck," she said. "It just made me very uncomfortable."