Accessibility links
'Here We Are' Review: Benjamin Taylor Rekindles Philip Roth's Singular Voice Benjamin Taylor, one of Roth's closest friends during the last decades of his life, has written a memoir that rekindles Roth's voice: brilliant, profane, and so very funny. 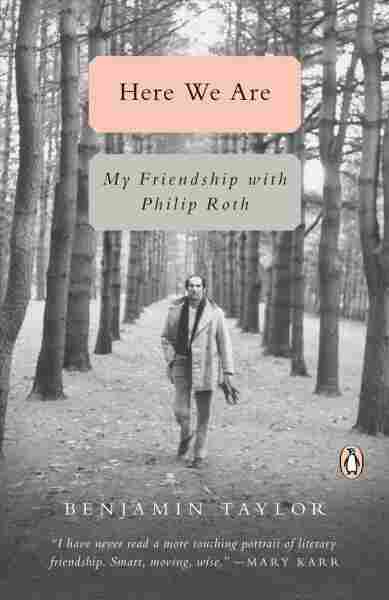 My Friendship With Philip Roth

"Imagine what Philip Roth would've made of this."

That's what I said to my husband last month (or was it two months ago?) during our extended family's first-ever Zoom Passover Seder. We were the virtual hosts and so we watched as, in groups or singly, family members materialized in their little Hollywood Squares cubes.

The little kids waved and held up plastic frogs and locusts, while some of the older folks squinted into their laptops and fiddled with the audio or pressed the wrong icon and vanished for a while altogether. Several times, the service was delayed by anxious phone calls from senior family members, requesting emergency tech support.

In mixed-marriage fashion, my husband and I took advantage of the situation and made ourselves Seder cups of gin and tonic instead of Manischewitz. Everyone genially agreed that the important thing about this shambling service was being together.

Had Roth lived long enough to witness Pandemic Passover on Zoom, he would have been merciless.

Roth died in 2018, leaving 31 books behind; like other Roth lovers, I will always want more. Benjamin Taylor's new memoir, Here We Are, temporarily eases the loss by giving us more of Roth's voice in conversation: brilliant, profane, and so very funny.

Taylor was one of Roth's closest friends during the last decades of his life. In fact, Roth dedicated his 2007 novel Exit Ghost to Taylor. Twenty years younger, gay and himself an accomplished memoirist and novelist, Taylor assumes the role of James Boswell to Roth's Samuel Johnson with ease — he's always aware, but only occasionally irritated, that Philip Roth is Philip Roth and he's not. At the outset of Here We Are, Taylor tells us:

We spent thousands of hours in each other's company. He was fully half my life. I cannot hope for another such friend. ... To talk daily with someone of such gifts had been a salvation.

Along with their conversations in Here We Are, Taylor summons up anecdotes and clear-eyed assessments of what made Roth tick. There's an appealing quality of randomness to this slim memoir that makes it feel like we're tagging along with the two friends on their constant walks, talks and dinners in the dive restaurants Roth preferred on the Upper West Side, where anything could come up, sometimes even big revelations.

Philip Roth's 'The Plot Against America' Comes To TV

For Zoe Kazan, 'Plot Against America' Is 'Scarily Prescient' And Personal

In 'Plot Against America,' David Simon Finds Present Day In An Imagined Past

Taylor says that after Roth announced his retirement from writing in 2012 "[h]e stopped making art," but he still wrote, producing a manuscript of over 1,000 pages, whose purpose was to air grudge after grudge. Taylor comments that "The underside of [Roth's] greatness swarmed with grievances time had not assuaged."

Taylor also recounts some of Roth's health struggles: Among other things, he suffered from back and heart problems. Taylor recalls one particular trip to the hospital with Roth where they jumped into a cab: the "aggressively flatulent" driver had Rush Limbaugh on at top volume. Roth, in pain, turned to Taylor and asked, "Are we to be spared nothing?"

There's that voice. Dry, droll, delighting in the Human Comedy, and resigned to sometimes being the butt of its ongoing jokes. The greatest pleasure of Here We Are is hearing Roth's voice again new, especially when he's talking about his writing. At one point in their conversations, Roth says to Taylor that what he cares about in his work is:

individuals enmeshed in some nexus of particulars. Philosophical generalization is completely alien to me. ... All my brain power has to do with specificity, life's proliferating minutia. Wouldn't know what to do with a general idea if it were hand-delivered. Would try to catch the FedEx man before he left the driveway. 'Wrong address, pal! Big ideas? No thanks!'

About his development as a novelist from his 1959 debut in Goodbye, Columbus to Portnoy's Complaint, which was published in 1969, Roth confesses:

Oh, I wanted to be literary, wanted to be influenced. There were Flaubert and Henry James. There were Dreiser and Sherwood Anderson. ... [But] I discovered I was not a gloomy but a raucous talent. And that's the story of Portnoy's Complaint... a full-scale farce with which to answer the abominations of the time: assassinations, cities afire, the nightly news from Southeast Asia. I flung my harmless obscenities back at the world-historical ones.

That last line stopped me cold and made me sorely miss the presence of Philip Roth in our world. What an epic Roth might have written, flinging Zoom Seders, sheltering in place, Lysol and toilet paper against our present world-historical obscenities.

Read an excerpt of Here We Are