Accessibility links
Jewish Americans Say They Are Scapegoated For The Coronavirus Spread Violations of health regulations by Orthodox Jews have been documented by public officials and media at a level of scrutiny that Jews say others don't face.

Listen · 3:37 3:37
Jewish Americans Say They Are Scapegoated For The Coronavirus Spread 3:37 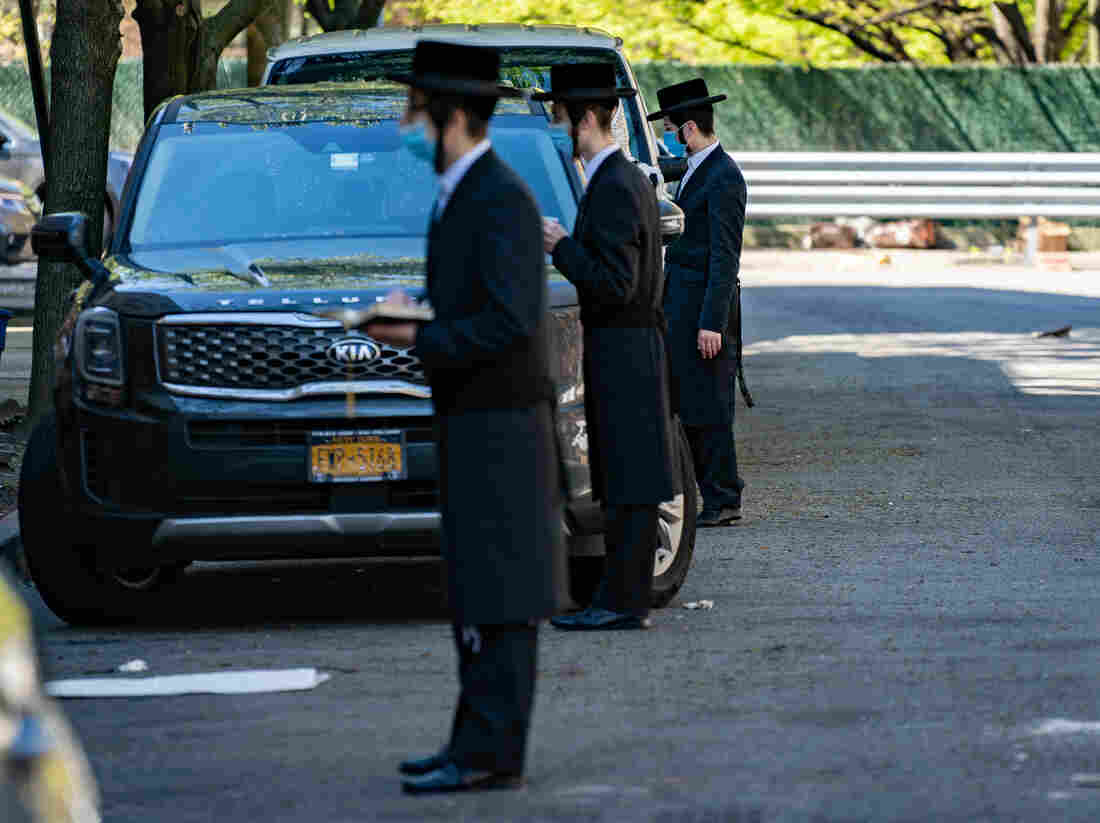 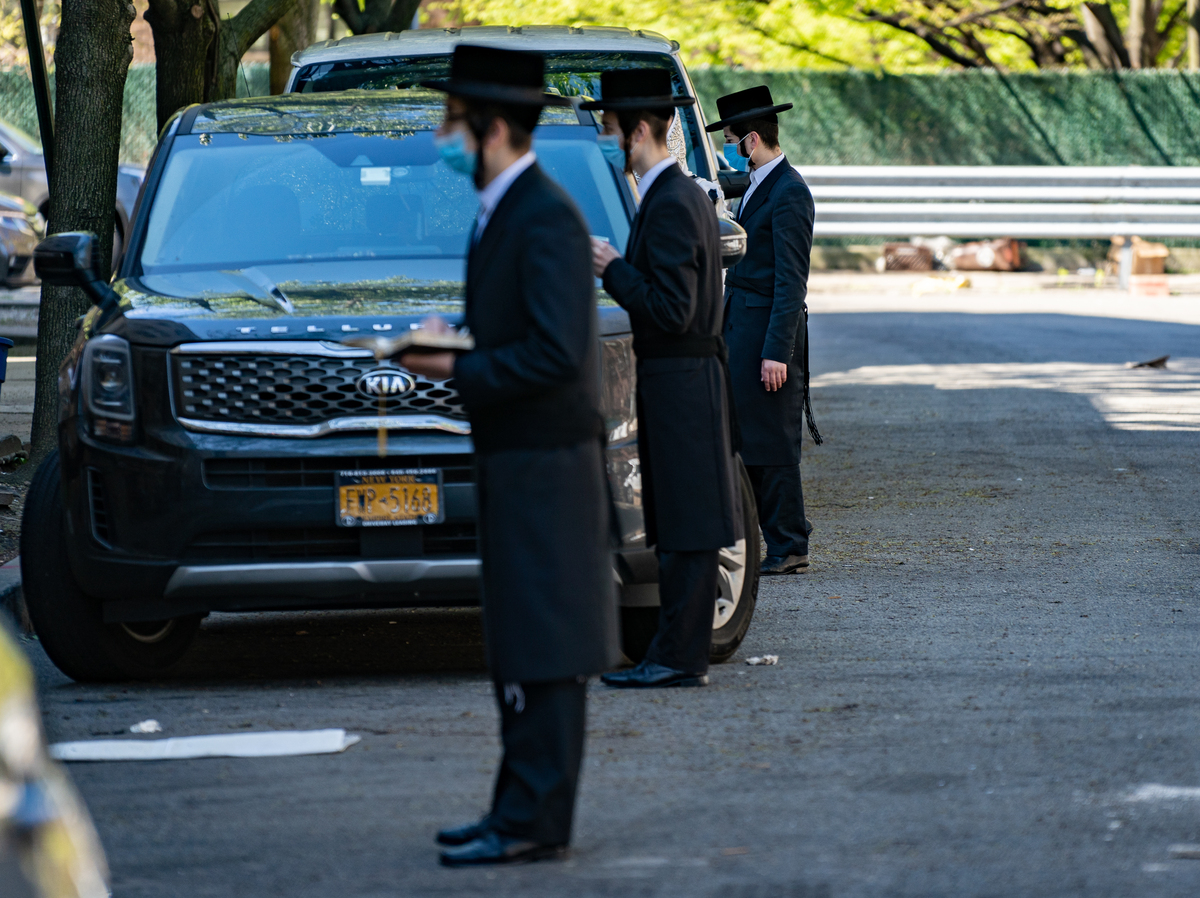 Hassidic Jews Socially distancing on a Willamsburg street during Saturday morning shabbat prayers on May 2.

American Jews are finding themselves in a historically familiar position: Scapegoated for a plague.

Some of the first New Yorkers to contract the coronavirus were Jews in the Orthodox Jewish communities in and around New York City. In the weeks that followed, several Jewish weddings and funerals were held in violation of public health orders. Then came statements from public officials singling out Jews, and anti-Semitic threats on Facebook.

After New York City Mayor Bill de Blasio witnessed the NYPD break up a large funeral in Brooklyn for a prominent rabbi, the mayor tweeted: "My message to the Jewish community, and all communities, is this simple: the time for warnings has passed."

At Least 5 Rabbis From Ultra-Orthodox N.J. Community Have Died From Coronavirus March 31, 2020

De Blasio was condemned by fellow Democrats and American Jews. There is no data indicating religious Jews are violating social distancing rules at a greater rate than other demographic groups. While there have been high-profile incidents of police disrupting Jewish gatherings, the NYPD has also made arrests of various sorts for failing to practice social distancing, like at a Brooklyn barbershop and at a Manhattan "marijuana party." And pictures of throngs hanging out at parks and closely congregating for the Navy Blue Angels and Air Force Thunderbirds flyovers indicated that not social distancing isn't a problem specific to a particular religious group.

De Blasio later said that he "spoke out of real distress that people's lives were in danger." He added: "I regret if the way I said it in any way gave people a feeling of being treated the wrong way, that was not my intention. It was said with love but it was tough love, it was anger and frustration."

My message to the Jewish community, and all communities, is this simple: the time for warnings has passed. I have instructed the NYPD to proceed immediately to summons or even arrest those who gather in large groups. This is about stopping this disease and saving lives. Period.

By some accounts, religious Jews in certain neighborhoods of New York City have been stricken by the virus at high rates. At the same time, Jews who have recovered from the virus have donated plasma in extraordinary numbers in an effort to save others.

In early March, Yaacov Behrman, a community leader and Hasidic Jewish activist, rushed to get ahead of the virus by marrying his bride, Shevi Katzman, after an engagement of just a week-and-a-half. They had a socially distanced wedding across two Brooklyn backyards — with a few siblings, no cousins, two witnesses and a rabbi, and 2,500 people watching on Facebook Live.

"I think that's what's so painful and upsetting about it, about the mayor's tweet, [is] the vast majority of Orthodox Jews have given up [something] — I gave up a wedding," Behrman said. "What are you generalizing for, Mr. Mayor? It's like going to the park and saying, 'My message to the yuppies,' you know?"

Behrman said he does not believe the mayor is anti-Semitic, but Jews should not have been singled out.

Yet there's a pattern of specifically highlighting Jewish offenders. In Lakewood, N.J., where early on in the pandemic police made arrests at large Jewish gatherings, a local news station reported that a school bus was carrying children to a Jewish school that was open, illegally. The reporter later acknowledged that the bus was just delivering food to homebound families.

In nearby Jackson Township, N.J., town council president Barry Calogero made a speech at a government meeting indicating that Judaism itself made Jews recalcitrant when it comes to following the rules.

"Unfortunately, there are groups of people who hide behind cultures or religious beliefs and put themselves, our first responders, and quite honestly all of Jackson and bordering towns at risk for their selfishness, irresponsibility and inability to follow the law put in place by President Trump and Governor Murphy," he said.

Calogero said he was not anti-Semitic. But after criticism he resigned days later, citing health reasons.

And in Rockland County, N.Y., where there are large communities of Orthodox Jews, the county executive's Facebook post about police breaking up a large Passover service was met by anti-Semitic comments.

Violations of health regulations by Orthodox Jews have been documented by public officials and media at a level of scrutiny that Jews say others don't face. Eli Steinberg, an Orthodox Jewish writer in Lakewood, N.J., says it's easier to generalize about those who wear traditional garb.

"We're, ya know, we're the guys dressed in black and white and we wear the hats, so it becomes a sort of more interesting story" when Jews violate health rules, he said. "But it's not — it's a story about people....People do dumb stuff."

The problem, he said, is when it is made to seem as though the few who violate the rules are more widespread in a particular community.

"In a time of such uncertainty, which we're going through now, when you can effectively scapegoat somebody or scapegoat a group of people about the issue that people are scared of...that's a part of it that concerns me," Steinberg said. "This moment where there's the vehicle of Covid19 to use to spread hate, it just becomes that much more scary." 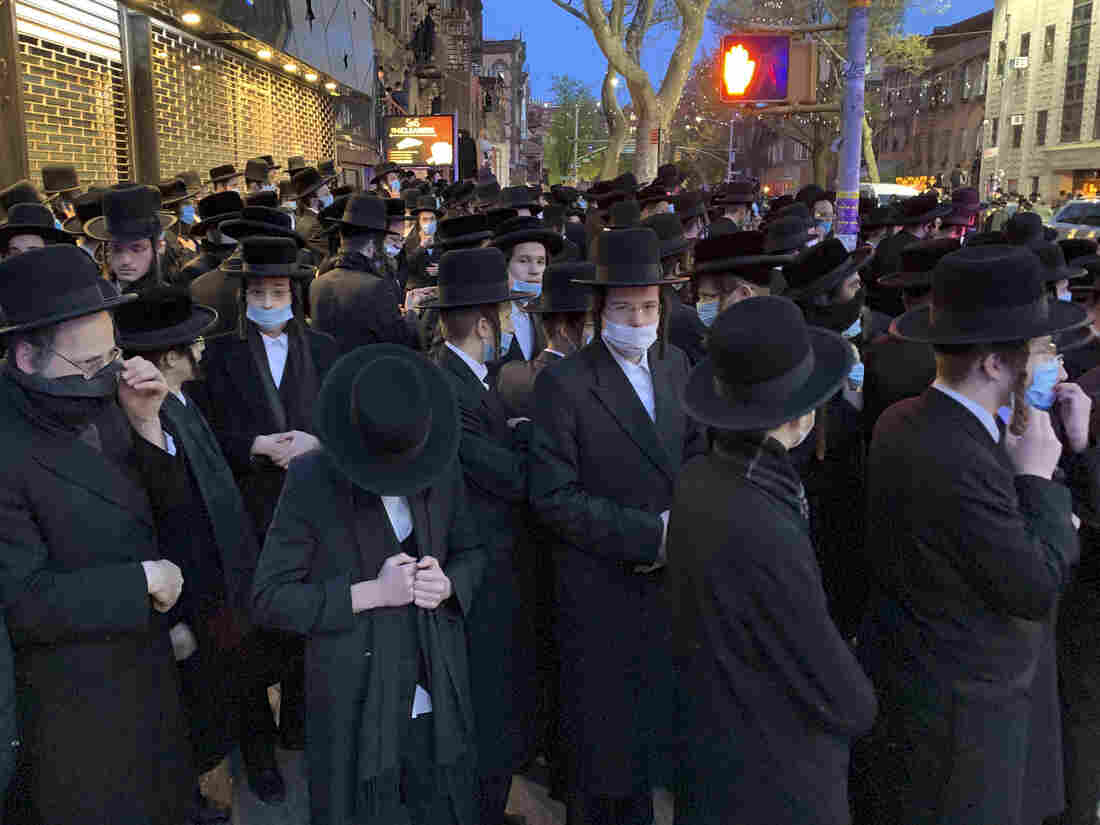 Hundreds of mourners gather in Brooklyn on April 28, to observe a funeral for Rabbi Chaim Mertz, a Hasidic Orthodox leader whose death was reportedly tied to the coronavirus. Mayor Bill de Blasio chastised "the Jewish community" following the breakup of the large funeral that flouted public health orders. Peter Gerber/AP hide caption 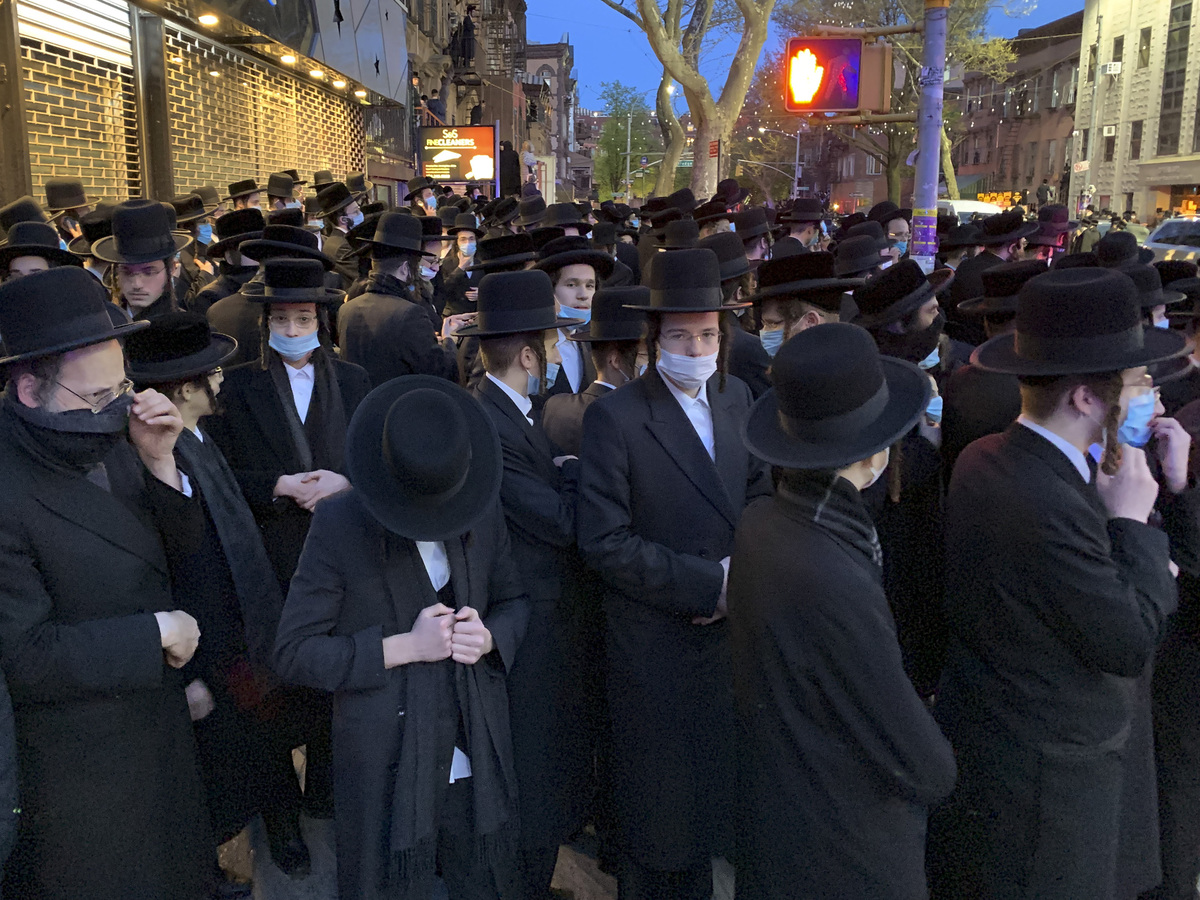 Hundreds of mourners gather in Brooklyn on April 28, to observe a funeral for Rabbi Chaim Mertz, a Hasidic Orthodox leader whose death was reportedly tied to the coronavirus. Mayor Bill de Blasio chastised "the Jewish community" following the breakup of the large funeral that flouted public health orders.

Bari Weiss, author of How To Fight Anti-Semitism and a New York Times opinion staff writer and editor, said given how anti-Semitism is at historic peaks in New York and around the country, public officials need to be "extremely specific" in criticizing large gatherings, instead of blaming "the Jewish community."

"I think that there is a double standard often when it comes to the way that the Jewish community and Jews are talked about, whether it's because we're not perceived as a minority, even though we are," she said. "It stands to reason that lots of people who already perhaps have animosity toward that community will be even more emboldened.

The Anti-Defamation League released a report this week showing that there were more anti-Semitic incidents in 2019 than at any year since it it began tracking in 1979.

"Anyone that's been paying attention, or anyone that knows people inside of these communities, knows already dozens of stories of people that have been spit on, assaulted, harassed, had their head coverings pulled off, had their face smashed with a paving stone," Weiss said.

Now, amid the coronavirus, the hate is more socially distanced — happening largely online. Last month the ADL documented how community Facebook groups are loaded with comments blaming Jews for spreading the virus, and calling for them to be firehosed, tear-gassed and denied medical care.

Already a New Jersey man was arrested for using Facebook to threaten to assault Lakewood's Jews for spreading the virus. He was charged with making terrorist threats during a state of emergency. A county deputy fire marshall in New Jersey was investigated for similar Facebook comments. And in Queens, a couple was charged with hate crimes after attacking a group of Orthodox Jews — ripping their masks off and punching them in the face — for supposedly not social distancing.

"You Jews are all getting us sick," the couple allegedly yelled.

This is all too familiar to Jews, Weiss says. For centuries Jews have been massacred for supposedly spreading plagues. Rats brought the black death to the European continent in the 1300s, "but rats weren't blamed. Jews were blamed." Thousands were slaughtered; entire communities were eliminated.

Jews today do not believe that violence at such a scale is imminent. But they remember their history.

"I think Jewish memory is always a gift, but it's especially a gift in a moment of crisis because frankly, we Jews have lived through a tremendous amount in our centuries on this Earth," Weiss said. "And whenever we ask could it get worse, we know the answer is yes, because we've lived through worse, or at least our ancestors have. So I think Jewish memory can help us be grateful and keep things in perspective."