Accessibility links
'Death Stranding' Makes Human Connections, Even In Isolation In Hideo Kojima's famously strange new game, you're often alone, trekking across deserted post-apocalyptic America. But you're also not alone, as you find clues and connections left by other players. 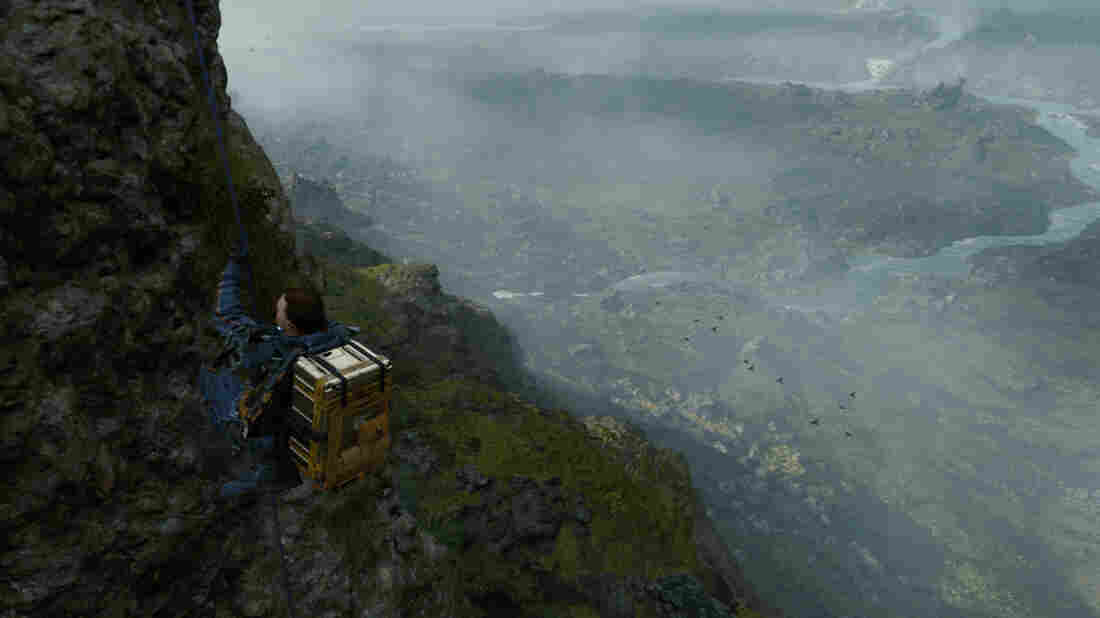 As you trek through the wilderness of Death Stranding, you'll gradually discover you're not as alone as you think. Sony Interactive Entertainment/Kojima Productions hide caption 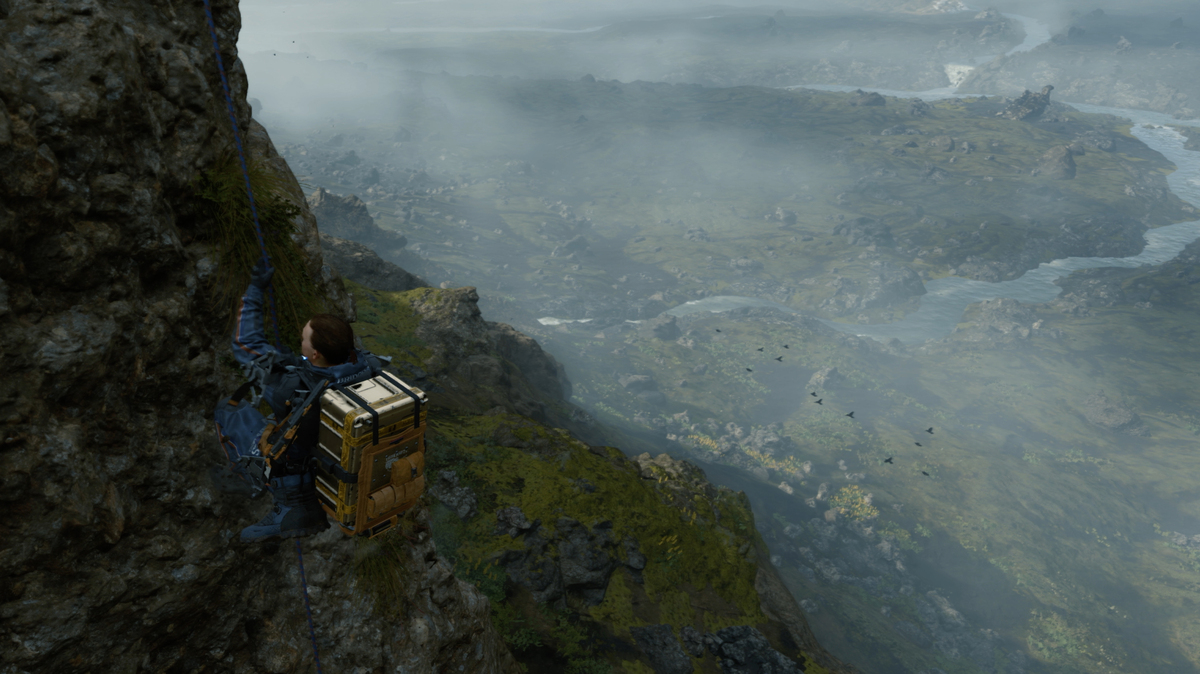 As you trek through the wilderness of Death Stranding, you'll gradually discover you're not as alone as you think.

If you were looking for a good reason to escape reality, the last six weeks of global COVID meltdown definitely fit the bill. And while pretending your dog is a sports hero or your family a famous work of art work for some, for many people only video games offer the much needed ticket out of their heads. Looking for that kind of release a week after the lockdowns began, I started playing Death Stranding, the new game by famed director Hideo Kojima. What I found there, however, was so much better than escape.

Remarkably strange and complex, Kojima's game is an extended meditation on death, solitude and connection. More than just another big-studio video game, Death Stranding turns out to be a work of art perfectly synchronized to our new pandemic life.

Like many other games, Death Stranding begins in a post-apocalyptic America. The main character, Sam Porter Bridges, is even played by The Walking Dead's Norman Reedus. Early in the game, Sam is tasked with knitting the nation back together by bringing new networking technology to the isolated human settlements that dot the landscape. It's Sam's estranged mother — who is also the last president of the United States — who gives him this task (and who, for some delightfully weird reason, is played by Lindsey Wagner, the star of the '70s TV show The Bionic Woman). Just before dying, Sam's mom also reveals his quest can only end with the rescue of Amelie, his sister. Amelie was sent on a similar journey three years earlier, and now she's being held hostage by terrorists resisting the reunification of the country.

On the surface, this might sound like any of the hundreds of dystopian stories that clutter our culture these days. But in the hands of someone with vision, any story can transcend its genre to become something more, and Hideo Kojima is definitely an artist with vision. He's seen by many as a true auteur of game design — think Stanley Kubrick or Quentin Tarantino with a PlayStation.

Kojima's famous Metal Gear Solid series invented an entirely new class of game where players could use stealth and strategy rather than just blasting their way through challenges. More importantly, Kojima brought deeply felt cinematic sensibilities to video games, weaving thoughtfully crafted stories seamlessly into gameplay. With Death Stranding Kojima wanted, once again, to create a new kind of game that would be a vehicle for exploring the biggest themes about being human in a divided society. Then, in a remarkable and unexpected synchronization of art and reality, those themes just happened to be the ones that matter most for our collective COVID journey.

You spend a lot of time alone in Death Stranding. In this broken world, Sam is a "porter," whose dangerous work mostly involves bringing supplies to desperate people. (That narrative alone links the game to so many of our COVID situations.) But as you trek over fractured landscapes, weighed down by hundred pounds of cargo, the game lets you find connections and assistance. One of the most remarkable aspects of Death Stranding is the way other players appear. This is absolutely a single player game, but as you make your way across its rough terrain, you'll find the imprint of these others: There are ropes and ladders for climbing steep cliffs and bridges laid down for crossing swift rivers. All of these were created by other players working through their own versions of the game. They left these aids for you, in your own journey, just as you can provide aid for them.

... even though you are alone as you travel, there are always others out there just like you, facing the same challenges and leaving signs that none of us are alone.

So even though you are alone as you travel, there are always others out there just like you, facing the same challenges and leaving signs that none of us are alone. This rich and complex game mechanic beautifully echoes the world we're living in now. It's also a remarkable example of how a game can function as art, giving us more intimacy with our own experiences of loneliness or the urge to be of service — experiences that turn out be universal as we all face coronavirus-changed lives.

And just like our strange new reality, what you're often alone with on your journey through the game is the fear of death. Of course, most every video game presents players with the possibility of death, after which comes the familiar "respawn" (minus some game goodies or experience points or whatever).

But it's death itself that comprises the central tension in the game. The apocalypse in Death Stranding began with the discovery of the Beach, a parallel reality which is nothing less than the land of the dead (or one location there). State-sized explosions called "voidouts," resulting from direct contact between the living and dead, are what left America in its fractured state. Then came the BTs (Beached Things), dangerous spirits of the dead who inhabit the wastelands between human settlements. There they wait, ready to drag living travelers down through black, liquid depths to the other side.

I've played more than my fair share of games that traverse the underworld, but that's not what's happening with Death Stranding. Kojima is exploring a particular, and particularly mythic vision of the interplay of death and life in this game. That's what makes the Beach and the BT's simultaneously strange, beautiful and terrifying. It's also also what connects the story to the lives we inhabit now standing that much closer to our mortality

Many times, I came away from my time in 'Death Stranding' quietly reflective about the ways we build bridges to each other even in peril and isolation.

Great art often works on the level of myth. Not myth in the sense of stories that never happened, but Joseph Campbell's sense of stories that are always happening. So, it may look like Death Stranding is about Sam trying to unite America, but really America is just a stand-in for all of us. It's our condition as human beings to be broken and separated, making our own journey in the shadow of death. But it is also our condition to seek and find connection in spite of it all.

That is the landscape Kojima wants us, through Sam, to explore and gain greater vision from. And that's how Death Stranding teaches in the way Karen Armstrong meant when she wrote, in A Short History of Myth, that a myth "is essentially a guide; it tells us what we must do to live more richly." And that, finally, is what Kojima meant when he wrote, "Through your experience playing the game, I hope you'll come to understand the true importance of forging connections with others"

Many times, I came away from my time in Death Stranding quietly reflective about the ways we build bridges to each other even in peril and isolation. And in these difficult weeks, that experience was so much better than just a few hours of escape.