Accessibility links
What You Need To Know About The Flynn, Biden And 'Unmasking' Story The story is complicated, and the complexity starts with the underlying practice at issue in the Michael Flynn saga: "unmasking." 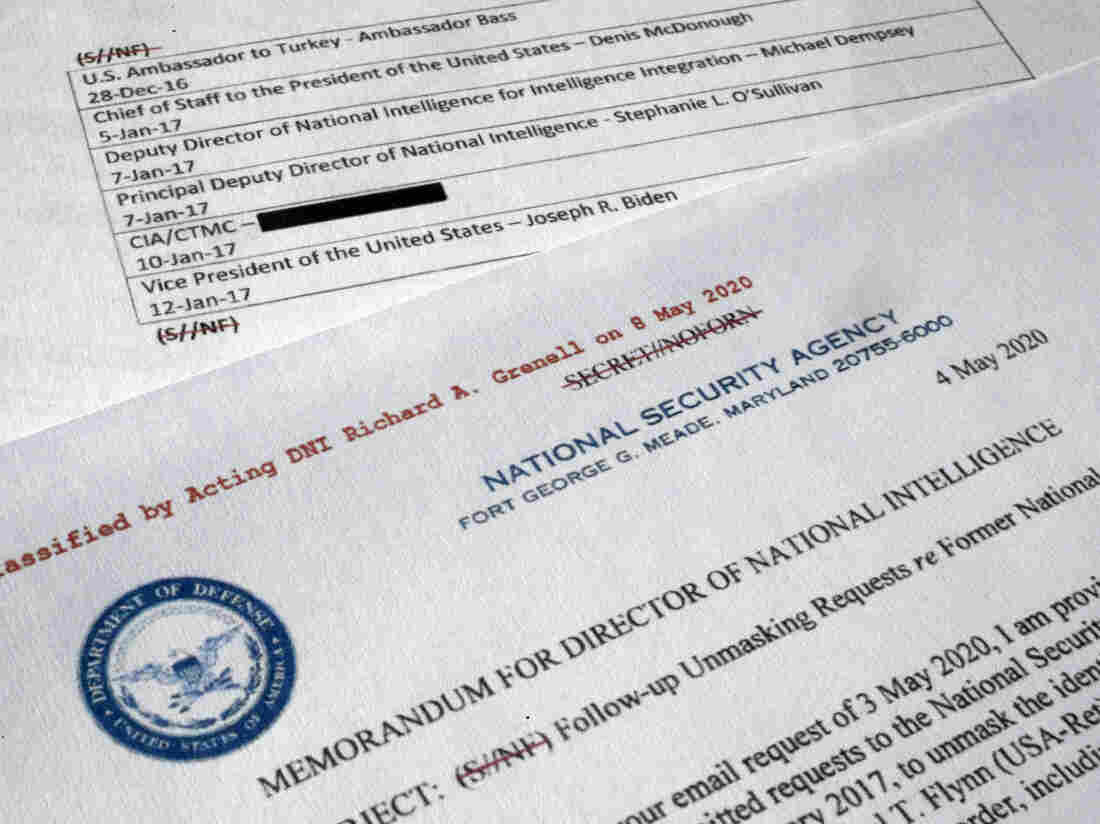 A declassified document with names of Obama administration officials who could have potentially made requests for the unmasking of Michael Flynn's name. Jon Elswick/AP hide caption 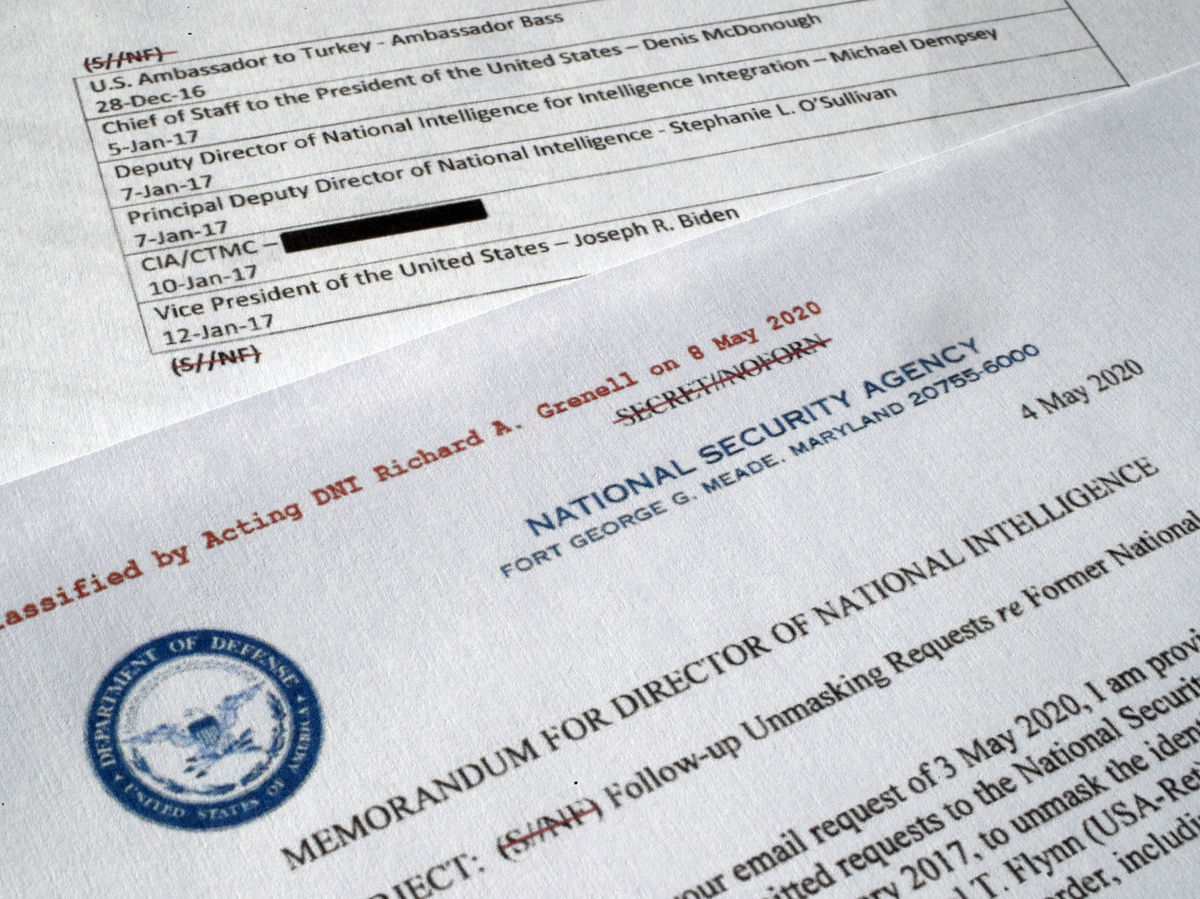 A declassified document with names of Obama administration officials who could have potentially made requests for the unmasking of Michael Flynn's name.

In the final days of the Obama administration, someone leaked a key nugget of information to The Washington Post about Michael Flynn, President-elect Donald Trump's national security adviser.

Then, since and today, Trump and Republicans have argued that was an abuse of power and a breach of the law, one that, in their view, needlessly cost Flynn his reputation, his liberty and a fortune in legal fees.

That's why, three very long years later, Trump and his supporters sought payback with evidence from that era they hope will cause political problems for a man who was in the thick of it — former Vice President Joe Biden, Trump's likely opponent in the general election this year.

Biden's camp calls the discussion about him and Flynn a distraction, meant to take the public's eyes off what Democrats call Trump's failure to manage a pandemic that has taken nearly 85,000 lives and put the most Americans out of work since the Great Depression.

But the story is complicated, and the complexity starts with the underlying practice at issue in the Flynn saga: "unmasking."

The intelligence community spies on hundreds or thousands of foreign targets abroad or foreign agents inside the United States. In many cases, it can hear what they say over the phone or read what they write in emails or text messages.

Reporting about those communications is used in myriad ways by investigators, analysts and policymakers. But for the sake of security and, to some extent, privacy, the reports undergo "minimization" before they're circulated widely.

So a report might not say: "Foreign Minister So-And-So talked about the election this week with John Smith." It would say he talked with "U.S. Person 1."

Certain officials of sufficient stature can ask for Person 1's identity to be "unmasked" to more fully understand what's taking place in the reporting. As the intelligence community has now revealed, one of those "U.S. Persons" appearing in reports in late 2016 and early 2017 was Flynn.

Was the government spying on him?

It was spying on the people with whom he was talking. When Flynn talked with them, he was captured in that surveillance.

On Wednesday, the intelligence community released a list of the people in the Obama administration who sought materials in which Flynn figured this way, though the National Security Agency said it couldn't assess whether everyone who'd requested such reports had actually seen them.

A spokesman for Biden emphasized on Wednesday that because of the way "minimization" works, there was no way for officials in the Obama era to single out Flynn or anyone else as a part of these practices. They couldn't see the names of the "U.S. Persons" beforehand.

They were working from reports about ongoing targets of surveillance — people such as Russia's then-ambassador to the United States.

Why was Flynn talking with targets of U.S. spying?

Flynn was Trump's foreign policy adviser in the campaign before he briefly became national security adviser. He and other members of the forthcoming Trump administration-in-waiting began reaching out to foreign officials after the 2016 election.

During that time, people in the Obama administration likely began to see new references to "U.S. Persons" in their reporting streams. Many of them, it's now clear, asked to see who was involved.

Some of the officials are boldfaced names from that era including Biden, then-U.N. Ambassador Samantha Power, then-CIA Director John Brennan and others. But many of the names in the intelligence materials are lower-level State, Treasury, CIA and other nonpartisan career officials. Some of the names are redacted, suggesting they remain on duty in the national security world.

There are more than 30 names in the directory.

What did all those people want to know?

Those details aren't clear, but it's possible to surmise based on some context clues. Two of the people, for example, are the then-U.S. ambassador to Italy and the then-deputy chief of mission at the embassy in Rome. They both submitted unmasking requests on the same day — Dec. 6, 2016 — the newly released records show.

It's possible they were looking at intelligence reports about the Italian or another European government, saw a reference to communications with a "U.S. Person" and asked to see who it was.

So this is how the FBI knew about Flynn's conversation with the Russian ambassador?

Right. It was surveilling the ambassador and heard when he made contact with Flynn. So the FBI also knew that Flynn asked Russia's then-ambassador to ask the Kremlin not to retaliate against the punitive measures the outgoing Obama administration was imposing.

But when Flynn talked about that conversation after it was revealed by The Post, he said he hadn't discussed sanctions. Vice President Pence repeated as much.

Were other people in the Trump camp swept up like Flynn was?

Probably, but there is no definitive accounting as the intelligence community has provided about Flynn. Senate Judiciary Committee Chairman Sen. Lindsey Graham, R-S.C., said Wednesday he wants to know about all the people in the Trump camp who might have been swept up or unmasked in this kind of surveillance.

With Trump's allies holding the reins of the intelligence community, that could be forthcoming.

Was this "unmasking" illegal?

No. It's common for officials of sufficient seniority. The intelligence agencies get thousands of unmasking requests every year. And the relevant agencies keep records about who makes the requests, as this week's developments have confirmed.

What may have been illegal was when an official in the White House, reviewing these reports and having unmasked Flynn, revealed some of that information to The Washington Post's David Ignatius for a column published Jan. 12, 2017. That sparked the series of events that led to Flynn's defenestration.

Will anyone be charged?

The groundwork has been laid, but it isn't clear if there is any criminal investigation underway.

Investigators, however, could try to use this now-public material to try to link people in the list to Ignatius. Trump has cited what he called the "crimes" from the Obama era and promoted a hashtag, "Obamagate," suggesting that some kind of reckoning might be coming.

Trump also may conclude the better strategy is simply to try the case in the court of public opinion, lumping Biden in with the alleged abuse of power and lawbreaking.

That was the approach taken by Trump's campaign manager, Brad Parscale, who said: "Americans have a right to know the depth of Biden's involvement in the setup of Gen. Flynn to further the Russia collusion hoax."