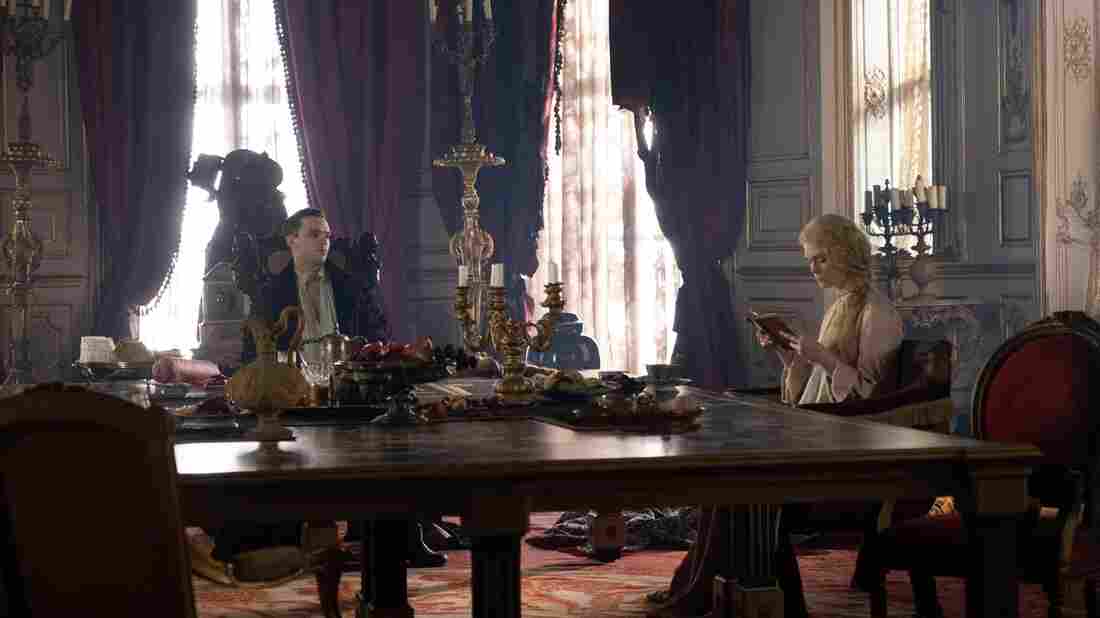 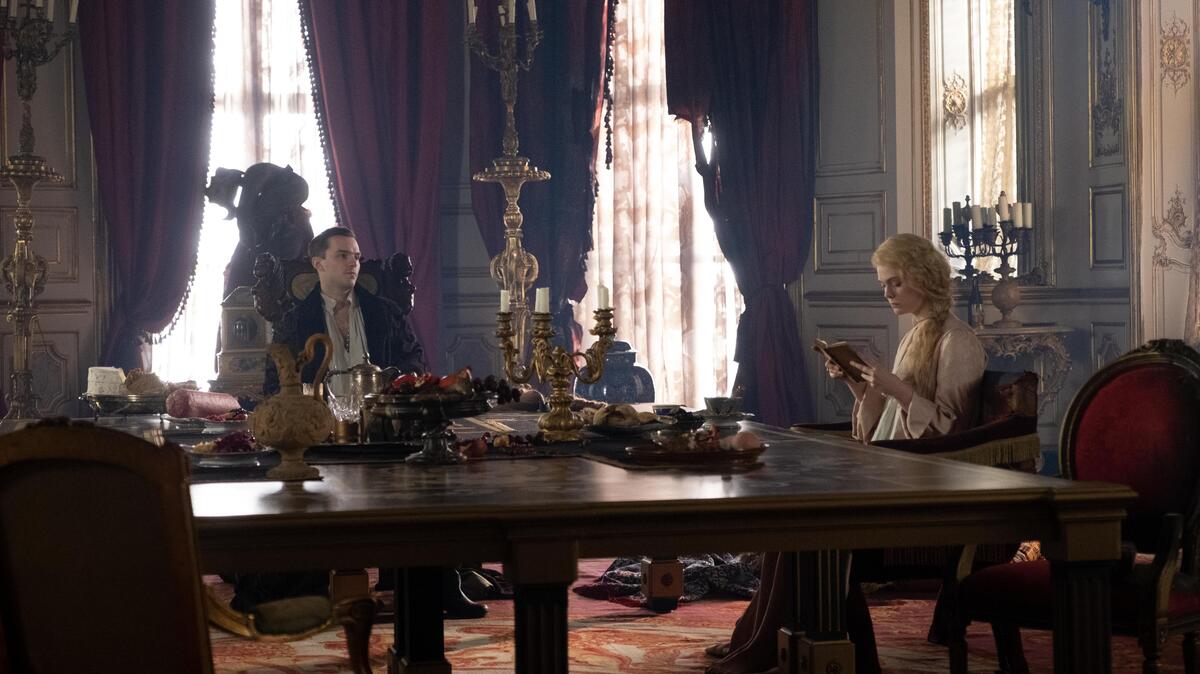 Huzzah? Emperor Peter of Russia (Nicholas Hoult) and a disillusioned Catherine of Prussia (Elle Fanning) enter into a not-great marriage in Hulu's The Great.

When we first meet The Great's young Catherine (Elle Fanning), she's dreamily pushing herself back and forth on a swing entwined with lush flowers. The year is 1762, or thereabouts.

It's not an exact date, because The Great, which drops Friday on Hulu, bills itself as "An Occasionally True Story," and is stuffed with gleeful and intentionally ahistoric elements: It elides entire generations of Romanovs, shunts real events backward and forward in time, and wholly invents a host of characters and situations intended to give students of Russian history a series of aneurysms.

So, Catherine's about to leave her German (technically Prussian) home behind to wed Peter, the emperor of Russia (Nicholas Hoult), and she's swooning in anticipation over everything to come — living in a palace, being an empress wedded to a wise and kind man ordained by God to lead Russia into a golden age of education and enlightenment — and also, not for nothing, her wedding night. Her girlish notions of the physical act of love are swoonily romantic, yes — but then, Catherine is an idealist, and one thoroughly convinced of her own wit, charm and shrewd intelligence.

The palace, of course, turns out to be a nest of vipers. Her life as an empress is one that leaves her powerless, trapped, seething with restlessness, aching to affect sweeping social change but denied the tools to do so. And as for Peter ... well.

As played with mercurial bravado by Hoult, Peter is a nightmare — a sociopathic boor poured into a pair of tight leather pants. Not an idiot, but the kind of coarse, swaggering narcissist that a life of obscene privilege engenders, or at least nurtures. He is emperor as louche, lazy, dissolute rock star, raised to expect love and loyalty from those he sees as entirely insignificant, except inasmuch as they keep producing a steady supply of the attention that fuels him. Hoult is having a ball, and it shows; he leans into Peter's childish thoughtlessness while allowing us to see intermittent flashes of humanity — a wounded quality that has something to do with how he was raised. "Someone should work out what goes on between a chap and his mother," he says, "there'd be money in that."

The Great was created by Tony McNamara, based on his 2008 play. McNamara went on to co-write 2018's The Favourite, and if you've seen that film, you know what to expect here — yes, bustles and corsets, wigs and snuffboxes, but also crisp ripostes, lacerating insults and dialogue that sizzles with withering wit.

What's missing, of course, is the idiosyncratic presence of The Favourite's director, Yorgos Lanthimos. (It's unfair to expect it, just as it's unfair to compare the series with the film; it's also, given how much creative DNA they share — in creator, subject, production design, actor (Hoult) and tone — inevitable.) There are directorial flourishes in the series, but Lanthimos' sustained, darkly surreal vision is absent. As a result, The Great seems altogether a more clear-eyed, down-to-business affair — the business in question being its twisty plot of shifting allegiances and palace intrigue.

Which makes sense, given the difference between serialized television and a one-off film. As we've seen as recently as 2017's Twin Peaks: The Return, when auteurism and serialized storytelling come together, the result can seem like the product of clashing impulses.

The plot of The Great, stretched out over 10 episodes, is one of constant narrative churn. Catherine's status rises, falls and rises again. Plots to kill Peter come together, then come to nothing, again and again. While this might strike some as less than satisfying, along the way there's plenty to see.

But the most pleasant surprise here is Fanning, a skilled dramatic actor who hasn't had many chances to show her comedy chops over the course of her career. She's fantastic here, as Catherine's arc takes her from naive to horrified to resigned to determined, all while holding on to her (very funny) inflated sense of self. The Great's strength is the way it gradually rounds out characters who seem flat and broad in the pilot but allows them to keep the qualities that made them readily recognizable types in the first place. Crucially, Catherine doesn't too suddenly abandon her smugness as soon as she realizes her predicament; she simply learns to channel it productively.

Fanning's also careful to show us that Catherine's desire for progressive social change in Russia is driven by a fuel mixture that's equal parts concern for the greater good, and her desire to be universally acclaimed for doing good.

The Great seems eager for audiences to draw contemporary parallels to the events it depicts, and those moments can't help but feel strained. An episode dealing with smallpox, for example, lampoons anti-vaxxers, which comes off like an exaggerated wink at the audience. Yet its extended, lacerating, season-long critique of the way privilege blinds the wealthy to injustice and curdles the soul seems resonant.

McNamara's 2008 play spanned the entirety of Catherine's long life and brought in an older actress to portray her in the second act; the television series deals only with her youth. Should The Great get the second season it deserves, or more, here's hoping we haven't seen the last of Fanning just yet; she's laid the series' emotional groundwork, and it'd be fun to see her build a new palace.