Accessibility links
In 'She-Ra And The Princesses Of Power,' True Strength Is In Being Yourself Netflix and DreamWorks Animation have rebooted the classic 1980s cartoon She-Ra: Princess of Power. The new version updates characters from the old show to reflect a more diverse audience for kids. 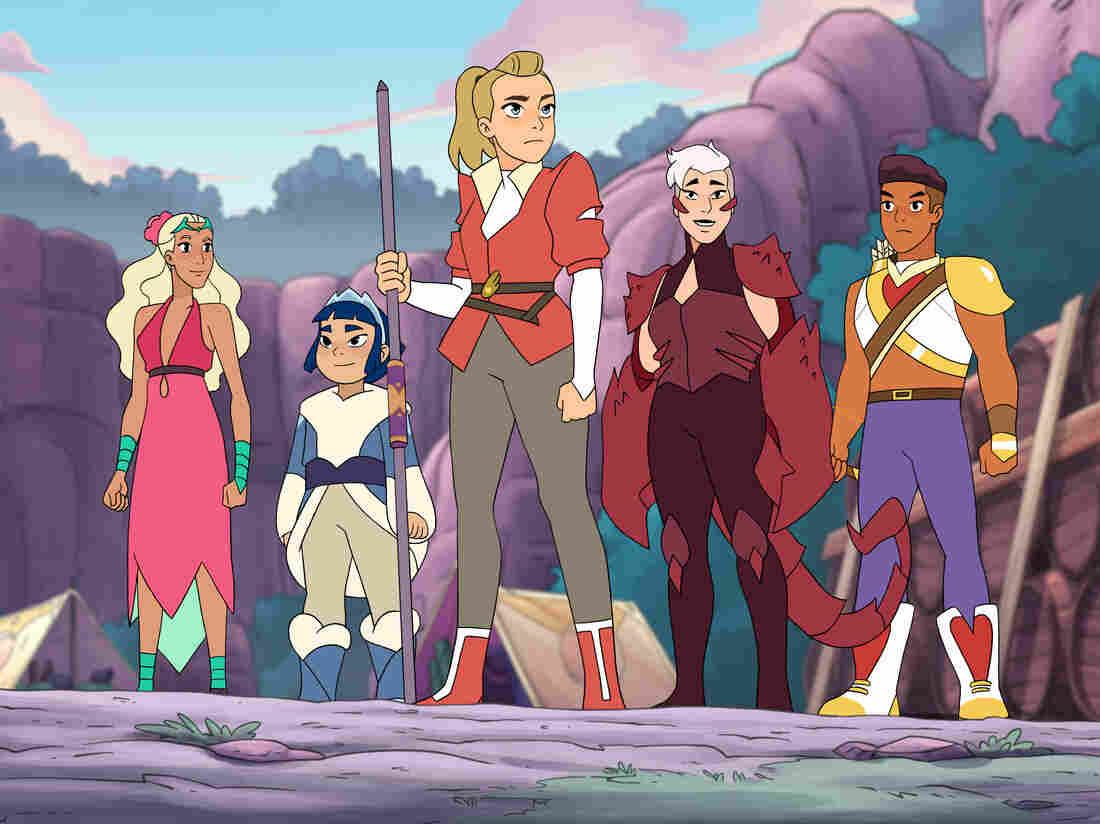 In the final season of She-Ra and the Princesses of Power, the rebellion faces an invasion from Horde Prime and his alien clone army. DreamWorks/Netflix hide caption 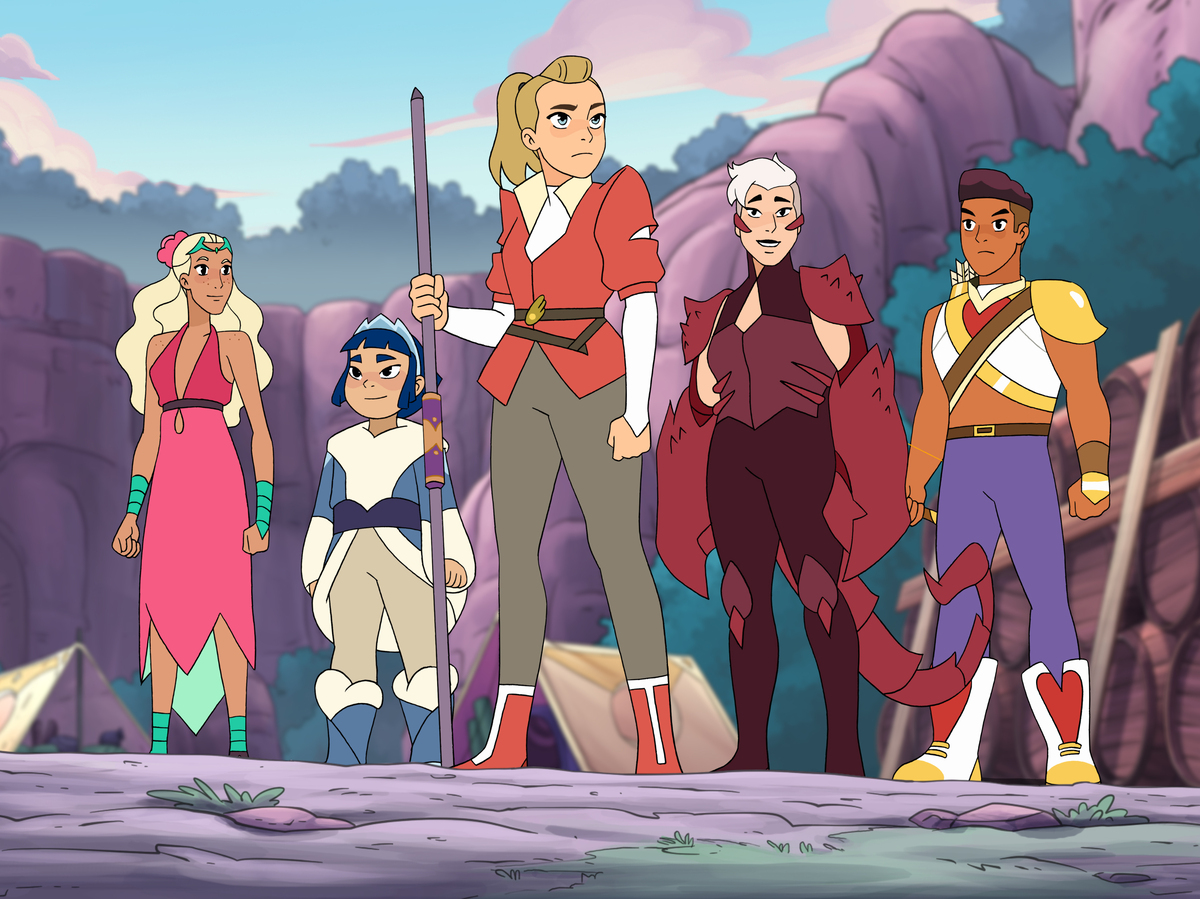 In the final season of She-Ra and the Princesses of Power, the rebellion faces an invasion from Horde Prime and his alien clone army.

Showrunner Noelle Stevenson has always been a fan of science fiction and fantasy. As a kid, she loved it all: the epic space battles, the magic, the quests that seemed larger than life.

But there was a problem with her favorite childhood stories, like Star Wars and The Lord of The Rings series. "I never quite saw myself reflected in them," Stevenson says, "certainly not at the heart of the story."

There weren't a lot of women.

So when she started writing stories of her own, she made sure kids like her felt seen, in more ways than one.

I know I'm not the only one that my first-ever crush on a female character was Velma from 'Scooby Doo.' I think it's important to know that this is an OK way to be. You don't have to hide.

"I know I'm not the only one that my first-ever crush on a female character was Velma from Scooby Doo," Stevenson says. "I think it's important to know that this is an OK way to be. You don't have to hide."

Stevenson began her career as a comic writer and illustrator. In 2015, her graphic novel Nimona was a National Book Awards finalist and her series Lumberjanes won two Eisner Awards.

When Netflix and DreamWorks wanted to reboot She-Ra: Princess of Power — an epic showdown between magical princesses and an evil alien invader — Stevenson was all in.

She kept much of the original show's action and adventure — like the original, the reboot takes place on the planet Etheria, and one of the princesses who is trying to stop the evil Horde army from taking over is named Adora.

She grew up behind enemy lines, taken from her home by the Horde and raised as a soldier. But eventually, Adora realizes the atrocities the Horde has committed against the Etherians and leaves to join the rebellion — and she quickly finds a magical sword that transforms her into a giant warrior princess named She-Ra.

Stevenson did make one small but important change to the show: Its name. The Netflix and DreamWorks version is She-Ra and the PRINCESSES of Power. All the princesses are important.

She also gathered an all-female writing staff to update this team of powerful women. In the original show, the princesses are white, skinny and presumably straight. The new rebellion includes women of color. They're women in all different shapes and sizes. And there are women who love other women.

Princess Weekes is an assistant editor at The Mary Sue, a website that covers the intersection of women and fandom. She's been writing about the She-Ra reboot since the beginning.

Weekes says that because the team behind She-Ra is made up of LGBTQ people, the stories on the show give genuine representation of queer life for kids.

"You allow queerness for young kids to be just normalized in general," Weekes says. "What I think Noelle Stevenson and the entire She-Ra team has done is create a society and place where characters can exist, but their biggest problem isn't that they're gay."

One of the many LGBTQ artists on the She-Ra team is Jacob Tobia. They're the voice of She-Ra's non-binary character, Double Trouble. 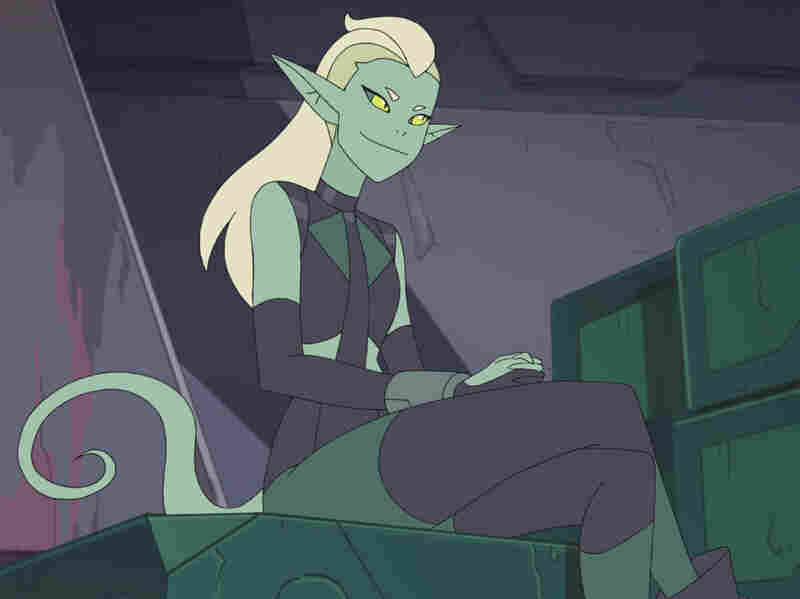 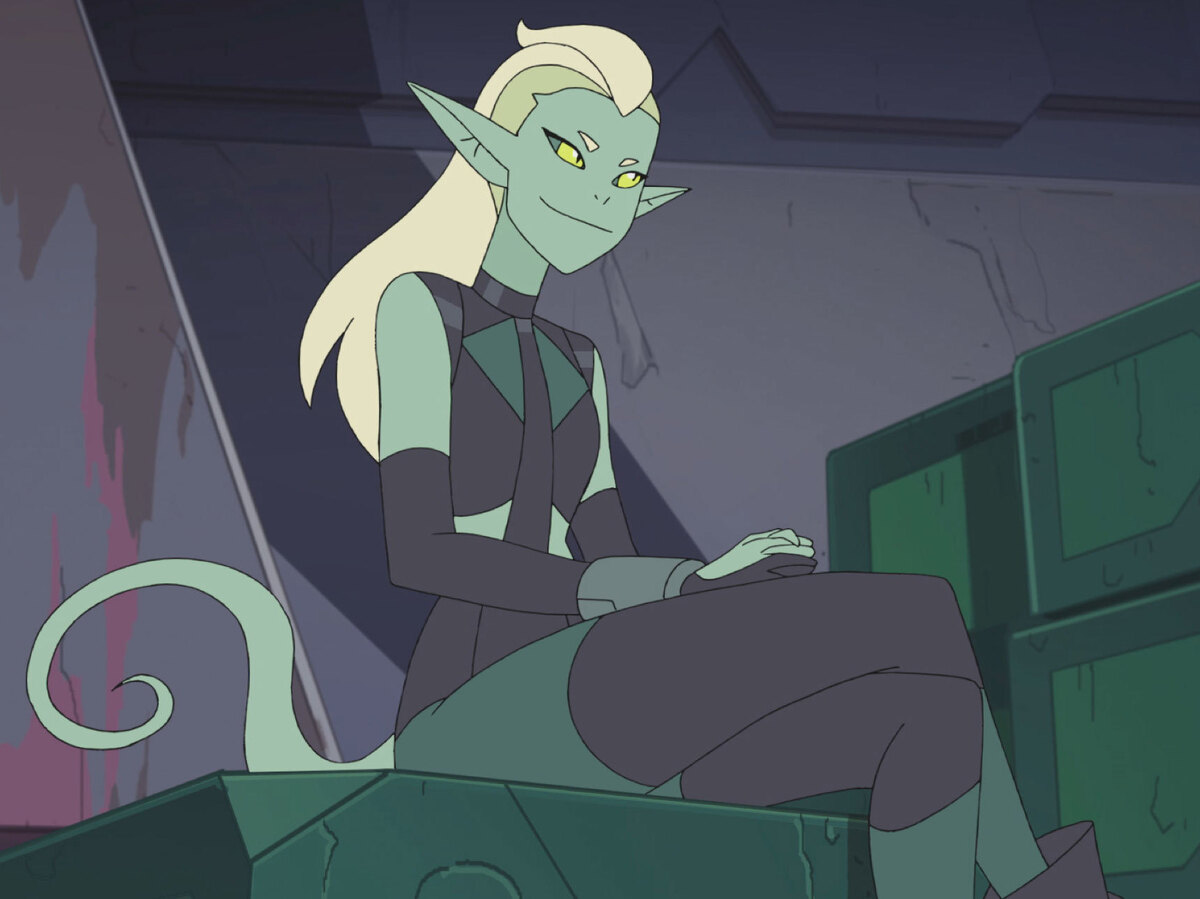 Double Trouble is a non-binary, shape-shifting mercenary, who is voiced by actor Jacob Tobia.

Double Trouble uses their power of shapeshifting to transform into any character on the show, and they cause chaos on both sides — the Horde and the rebellion. Tobia says Double Trouble's ability to create conflict without squarely fitting into a box of good or evil shows how dynamic the character is.

"They inhabit a complicated moral tapestry," Tobia says. "That's what having access to full personhood looks like, is being able to play characters that aren't just there to be the moral of the story, but are there to advance the story, to escalate conflict and just cause trouble."

She-Ra and the Princesses of Power is far from the first children's show with LGBTQ representation. There's decades of history with queer characters and story lines present. But for a long time, it had to be subtle.

"It's not accidental that every gay person I know loved Sailor Moon growing up," Tobia says. "It's because there was embedded in the story a transformation narrative for each of the characters. You went from the clothes you had to wear to school, to then getting your magical uniform that gave you your special powers that was shiny, and sparkly and cute."

Tobia says as a gender nonconforming kid, shows like Sailor Moon and now She-Ra tell children that they're most powerful being their true selves.

What's important now is that She-Ra and the Princesses of Power — as well as shows like Steven Universe and Craig of the Creek — can take these same LGBTQ stories and put them out in the open, showing kids that being queer is an option.

Mey Rude is a journalist and a consultant for writing transgender characters in entertainment. She worked with Stevenson, in fact, on the coming-out story of a trans character in the comic series Lumberjanes.

"It's like 'Oh, I can be this,' " Rude says. "I didn't know before that I could act this way — that I could love this way, that I could dress this way — and have a loving family and friends. Shows like She-Ra show you that you can be."