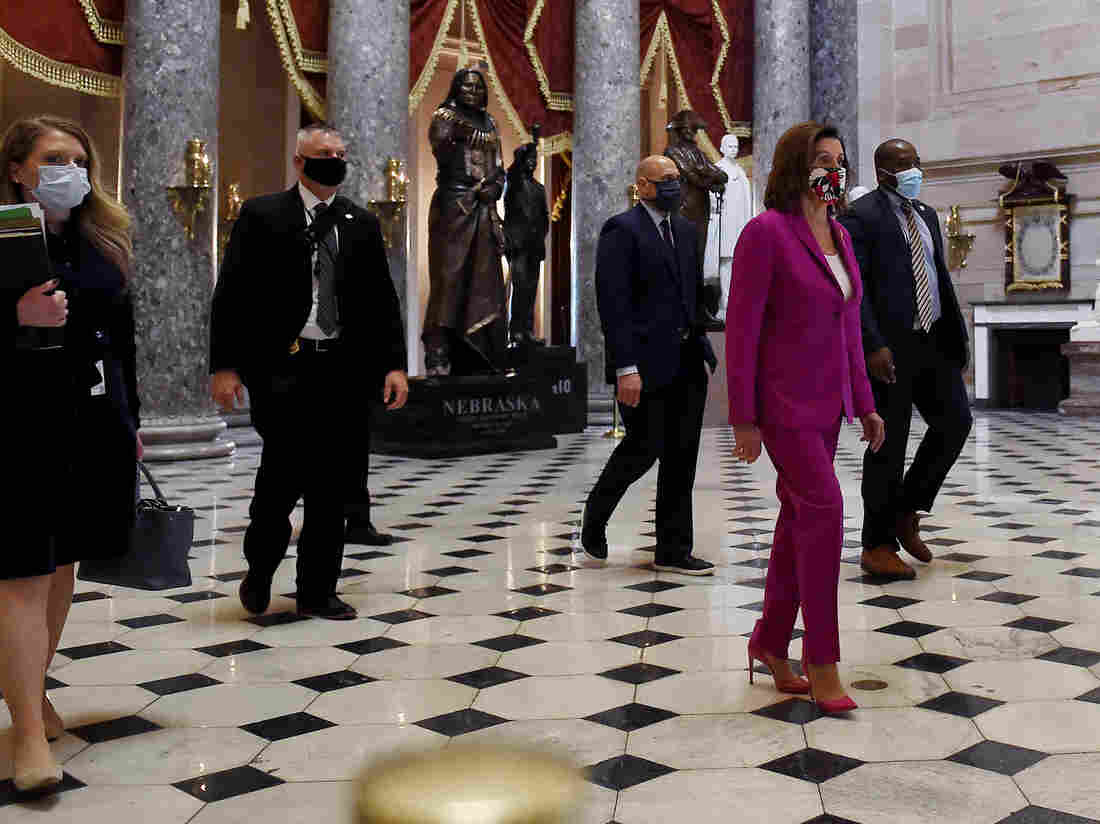 House Speaker Nancy Pelosi, D-Calif., walks past the Statuary Hall ahead of floor debate on a record $3 trillion coronavirus response package Friday to fund the fight against the pandemic and provide emergency payments to millions of Americans. Olivier Douliery/AFP via Getty Images hide caption 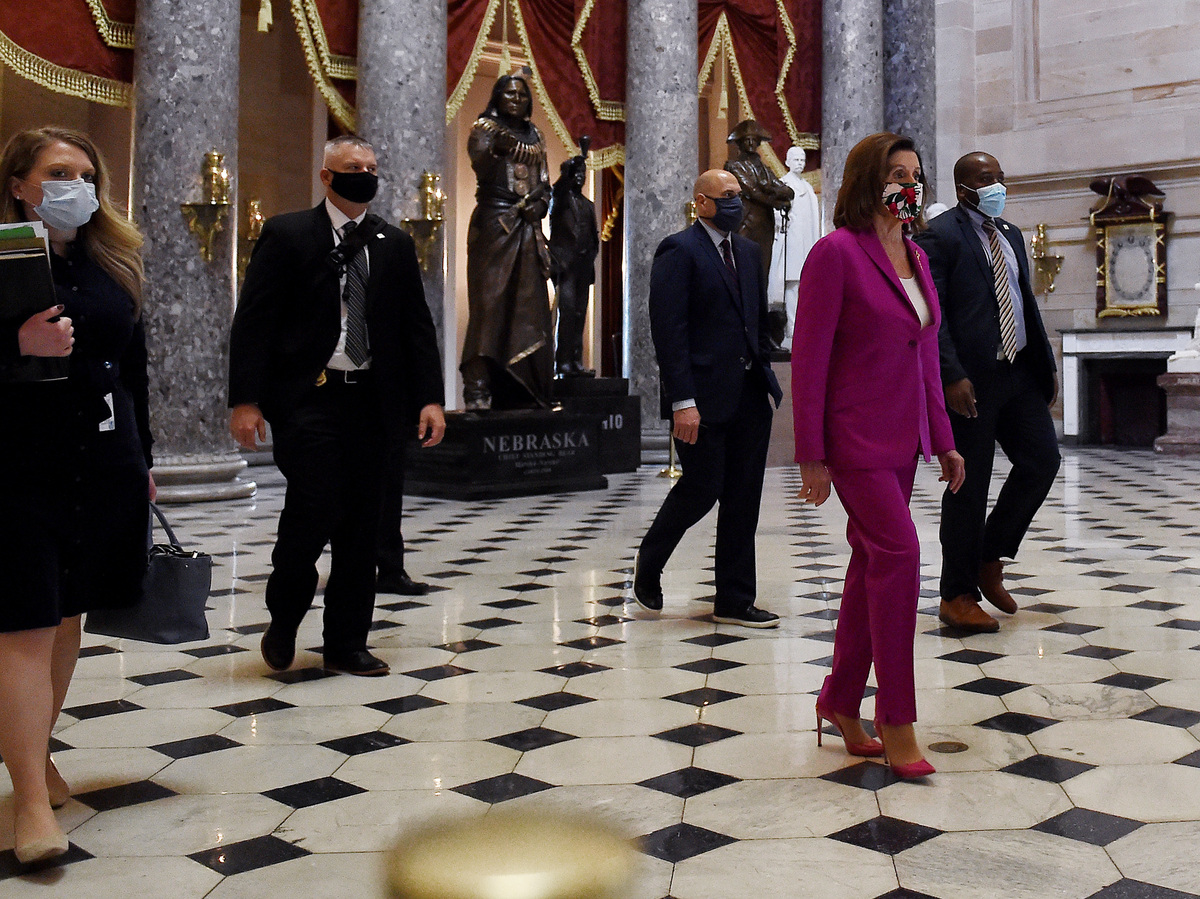 House Speaker Nancy Pelosi, D-Calif., walks past the Statuary Hall ahead of floor debate on a record $3 trillion coronavirus response package Friday to fund the fight against the pandemic and provide emergency payments to millions of Americans.

House lawmakers on Friday approved a Democratic proposal to provide $3 trillion in coronavirus relief that would include a new wave of help for state and local governments, workers and families.

The House voted 208 to 199 — largely along party lines — to pass the measure. The size of the bill represents the biggest ever proposed and it includes another round of direct cash payments to Americans, extends unemployment benefits to the end of January, and adds hazard pay for front-line workers. It also expands virus-testing efforts, contact tracing and treatment.

"This is a very strategically planned piece of legislation that is tailored strictly to meet the needs of the American people regarding the coronavirus pandemic," House Speaker Nancy Pelosi, D-Calif., said on the House floor ahead of the vote. "To do anything less would not be responsible."

Most Republicans derided the bill as a wish list from House Democrats to push ahead of November's election. Bipartisan talks have stalled with the GOP-led Senate and the Trump administration.

Pelosi maintained the measure is focused on reopening the economy, but the plan is dead on arrival in the Senate. Still, Democrats say it showcases a starting line for talks for more fiscal stimulus as the pandemic worsens its economic and public health toll.

The legislation weaves together a long list for policies Democrats have pushed over its 1,800-plus pages, addressing gaps they feel left behind by four previous bipartisan packages approved since March. So far, Congress has passed about $3 trillion in aid.

Now, Republicans say members should pause to evaluate how the previous bills are working, and not rush into another plan that will pile more onto the deficit.

"Instead of going big, it seems you went crazy," House Minority Leader Kevin McCarthy, R-Calif. said on the floor Friday. "This is a political messaging bill that has no chance of becoming law."

On Thursday, the Trump administration quickly issued a veto warning if the Democratic bill reaches the president's desk. The statement noted that previous plans have won White House support.

"This proposed legislation, however, is more concerned with delivering on longstanding partisan and ideological wishlists than with enhancing the ability of our Nation to deal with the public health and economic challenges we face," the administration's policy statement argues.

And the effort drew some opposition among some moderate and progressive Democrats. Progressive members, such as Washington State Rep. Pramila Jayapal, raised alarm the bill didn't go far enough. And moderate Reps. Abigail Spanberger of Virginia, Joe Cunningham of South Carolina and Cindy Axne of Iowa said the bill went too far.

"Unfortunately, many Members of Congress — including some in my own party — have decided to use this package as an opportunity to make political statements and propose a bill that goes far beyond pandemic relief and has no chance at becoming law, further delaying the help so many need," Spanberger said.

Most Democrats referred to the legislation as a follow-up to the CARES Act, which was approved in March, but it is not seen as the final action that Congress will have to take in response to the coronavirus. The legislation, just released Tuesday, provides large sums for policies that go beyond that earlier proposal.

Many Senate Republicans have criticized the push for more state assistance, arguing that any new money needs to be tied to the pandemic and not help address budget issues that predated the crisis.

"It still reads like the speaker of the House pasted together random ideas from her most liberal members and slapped the word 'coronavirus' on top of it," McConnell said of the House bill a day earlier on the Senate floor.

The bill also includes some changes to programs that were approved in the CARES Act, including an expansion of the IRS payment program. Democrats want more generous benefits for families, including a $1,200 payment for each dependent. The CARES Act limits payments to $500 per child; adults or other dependents do not currently qualify. In all, the Democratic bill provides up to $6,000 per household.

In addition, the plan sets aside $3.6 billion to protect federal elections, $25 billion to support the U.S. Postal Service, $100 billion for low-income rent support, $75 billion for a homeowner assistance fund and $100 million for the Violence Against Women Prevention and Prosecution Programs.

The HEROES Act, which stands for the Health and Economic Recovery Omnibus Emergency Solutions Act, also extends emergency family and medical leave until the end of 2021. Doing so is part of their broader focus on child care and family support. The official scorekeepers at the Congressional Budget Office estimate that the earlier version of the leave provisions, which passed in March and extend through the end of this year, would themselves cost $105 billion. The latest proposal would more than double the length of those benefits.

Republicans have already rejected many elements of the bill, including a suspension of the cap on the state and local tax deduction that was approved as part of the 2017 GOP-led tax cuts.

Pelosi conceded Thursday she hasn't talked with Treasury Secretary Steven Mnuchin — her administration contact in previous negotiations — since the bill was released. However, she's bullish that Republicans, including the Trump White House, will come around for a deal on a fifth bill.

"I do think, and have confidence, that our colleagues on both sides of the aisle, both sides of the Capitol and even down Pennsylvania Avenue know ... the hardship the American people are feeling, that they need that cash that we're sending," Pelosi told reporters Thursday. "I'm optimistic that the American people will weigh in and make their views known and, again, we want to do this working together, predicated on initiatives that have passed in a bipartisan way before."

Earlier Friday, the House also voted along party lines to approve historic changes to their ability to vote and attend hearings remotely during the pandemic. In a vote of 217 to 189, they green-lighted a plan to vote by proxy and hold hearings by video conference despite Republican objection.

Many members voted for the measures on Friday donning masks, and under new social distancing requirements that stretched the votes into a daylong affair.