Accessibility links
Attorneys For Arbery Shooting Suspect Say Their Client Did Not Commit Hate Crime Lawyers for Gregory McMichael, one of the two men charged in the murder of Ahmaud Arbery, said the facts of the case "can not be shoehorned into a narrative that's being told so far." 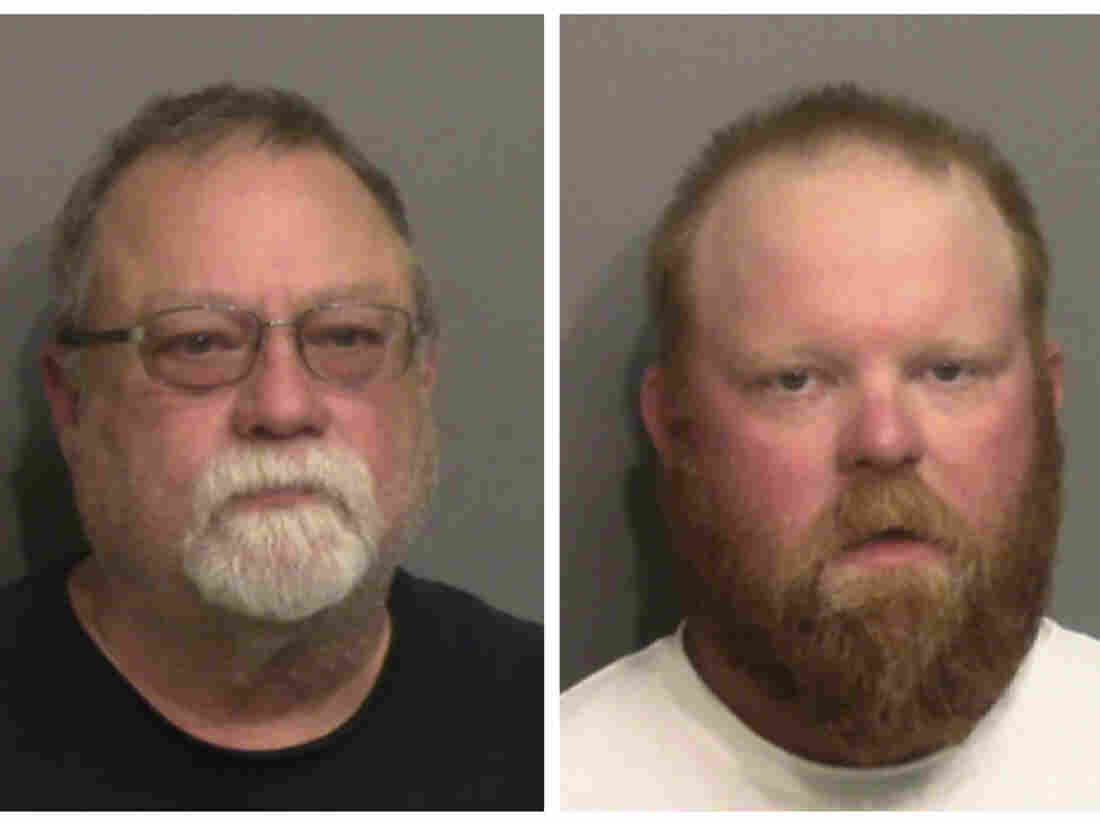 Gregory McMichael and his son Travis McMichael have been charged with murder in the February shooting death of Ahmaud Arbery, whom they had pursued in a truck after spotting him running in their neighborhood. Glynn County Detention Center via AP hide caption 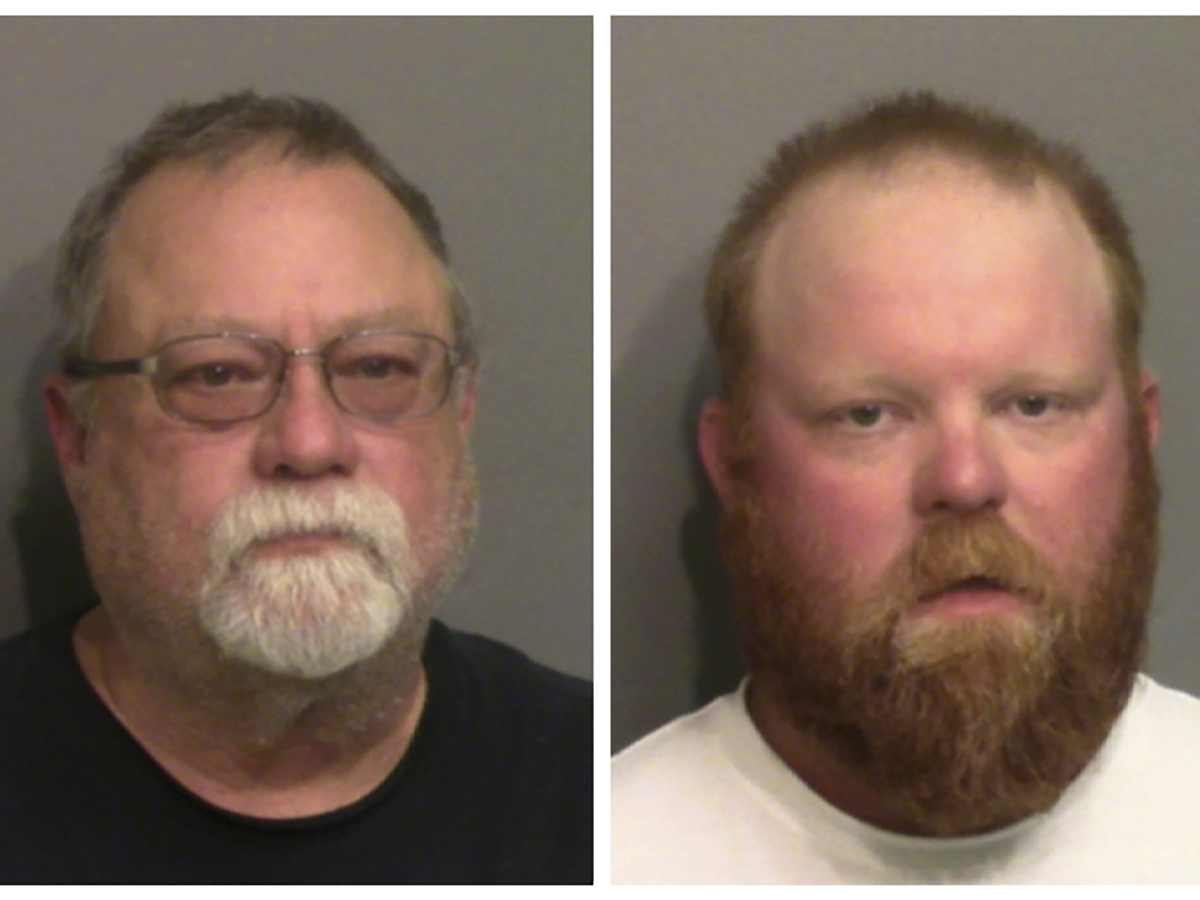 Gregory McMichael and his son Travis McMichael have been charged with murder in the February shooting death of Ahmaud Arbery, whom they had pursued in a truck after spotting him running in their neighborhood.

Attorneys for one of the shooting suspects in the Ahmaud Arbery case said they believe they have uncovered enough information to convince a judge to free their client before the start of his murder trial.

"We do. We do," Franklin Hogue, one of the lawyers for Gregory McMichael said Friday when asked if he thought they had enough evidence to get him out of jail.

"We have to convince a judge to set him a bond," Hogue said, during a press conference in Macon, Ga. "A tall order for a judge to set a bond in any murder case, but let alone one that's gotten a lot of attention like this one."

He provided no details on what that information could be.

Gregory McMichael, 64 and his son Travis McMichael, 34, who are both white, have been held without bond since their arrest last week for the Feb. 23 killing of Arbery. They are both charged with murder and aggravated assault.

Arbery's family has framed the death of the 25-year-old black man as a modern-day lynching, arguing he was doing nothing but jogging in a Brunswick, Ga.-area neighborhood when he was confronted by the McMichaels and shot to death.

Georgia is one of four states that has no hate crime law.

Earlier this week the U.S. Department of Justice said it was "assessing all of the evidence" and will make a determination if federal hate crime charges should be filed.

The McMichaels' lawyers disagreed such charges should be brought, while also acknowledging Arbery's killing was a "tragedy."

Hogue added that while the killing appears to bear a resemblance "to elements that feed into the despicable and violent history of racism" in the U.S., the facts of this case "can not be shoehorned into a narrative that's being told so far."

"Greg McMichael did not commit murder. Greg McMichael is not a party to the crime of murder," Hogue said. "This is not some sort of hate crime fueled by racism."

After going 10 weeks without an arrest, the investigation into Arbery's death accelerated after cell phone video that appears to show him being killed was released earlier this month and went viral.

Attorney Laura Hogue, who is married to Franklin Hogue and is also defending Gregory McMichael, said during the press conference that not all the facts have been made public and there are other recordings of the shooting.

As Georgia Public Broadcasting's Emily Jones reports, lawyers for the younger McMichael made a similar argument during a media briefing Thursday. 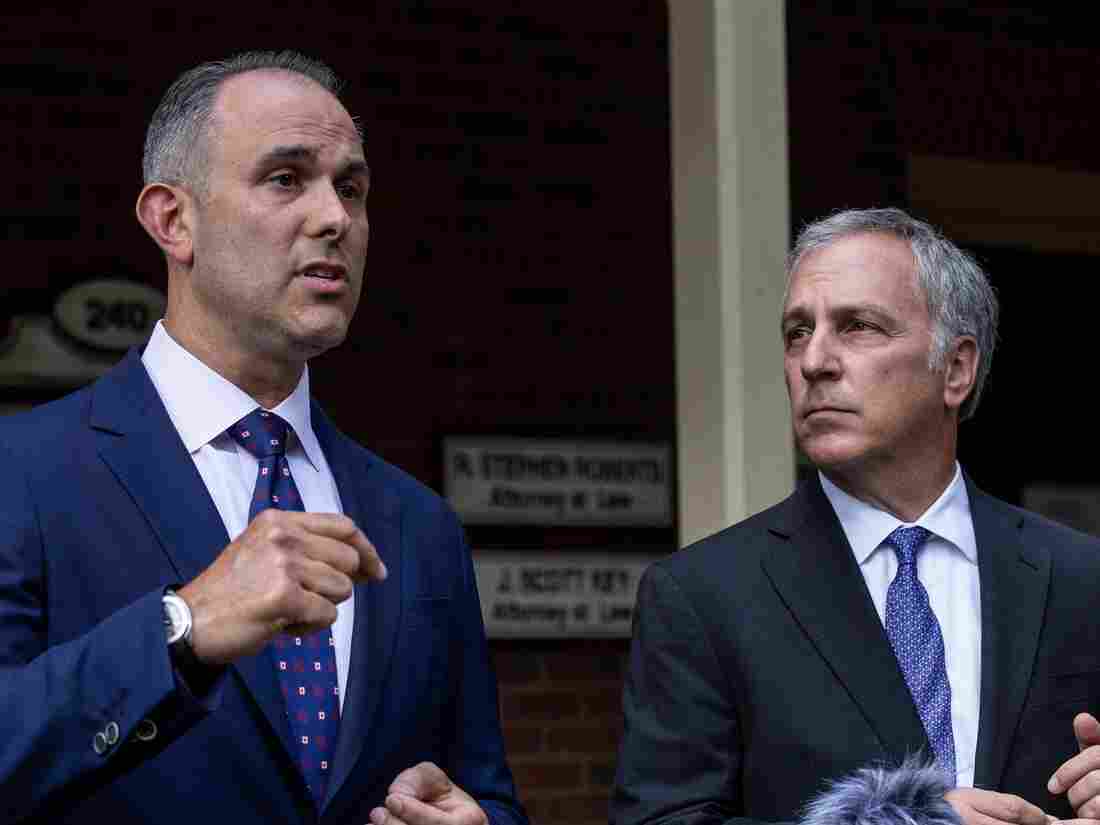 Attorney Jason Sheffield. left, and his law firm partner, Robert Rubin, respond to questions from the press outside their office on Thursday, in Decatur, Ga. The attorneys are representing Travis McMichael. Ron Harris/AP hide caption 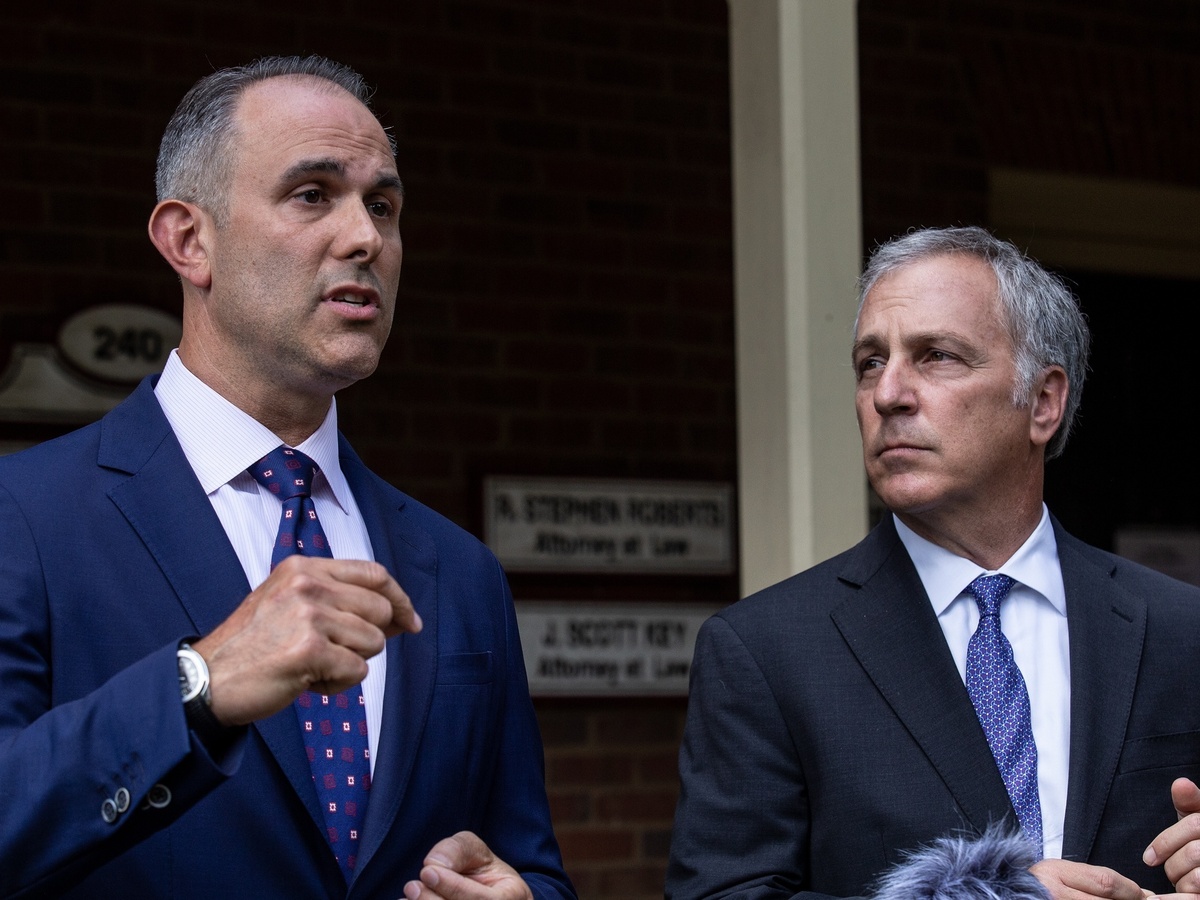 Attorney Jason Sheffield. left, and his law firm partner, Robert Rubin, respond to questions from the press outside their office on Thursday, in Decatur, Ga. The attorneys are representing Travis McMichael.

The McMichael's told police they thought Arbery was a burglary suspect and that's why they pursued him in their truck, armed, wanting to speak with him.

It was only after an altercation with Arbery, that Travis McMichael opened fire, according to the report given to the Glynn County Police Department.

Recently-released surveillance footage shows Arbery at a construction site on the day of his death.

Lawyers for Arbery's family issued a statement Friday acknowledging Arbery is in captured in at least one video.

The lawyers add that there were frequently people at the construction site. They also said they confirmed with the homeowner nothing was damaged or burglarized. In fact, according the statement, the homeowner said all Arbery did was take "a drink of water from the working sinks."

"Ahmaud Arbery seems to be the only one who was presumed to be a criminal and ultimately the only one murdered based on that assumption," the Arbery family attorneys said.

According to the police report, the McMichaels each had firearms, the father with a .357 Magnum handgun, the son with a shotgun. The autopsy report released by the Georgia Bureau of Investigation concluded Arbery "died of multiple shotgun wounds."

On Monday, Georgia's Attorney General Christopher Carr named Joyette Holmes, the first black woman to serve as the district attorney of the Cobb County Judicial Circuit, as lead prosecutor in the case.

Carr has also requested both the DOJ, and the Georgia Bureau of Investigation look into the first two district attorneys' handling of the Arbery case.