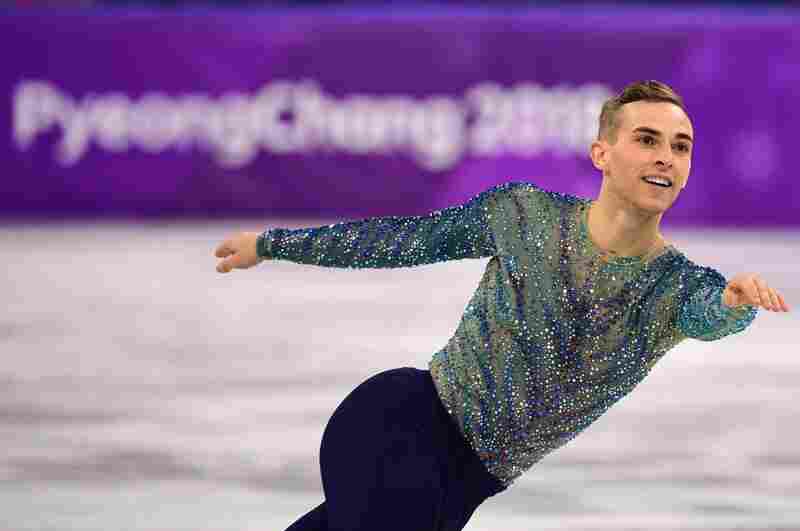 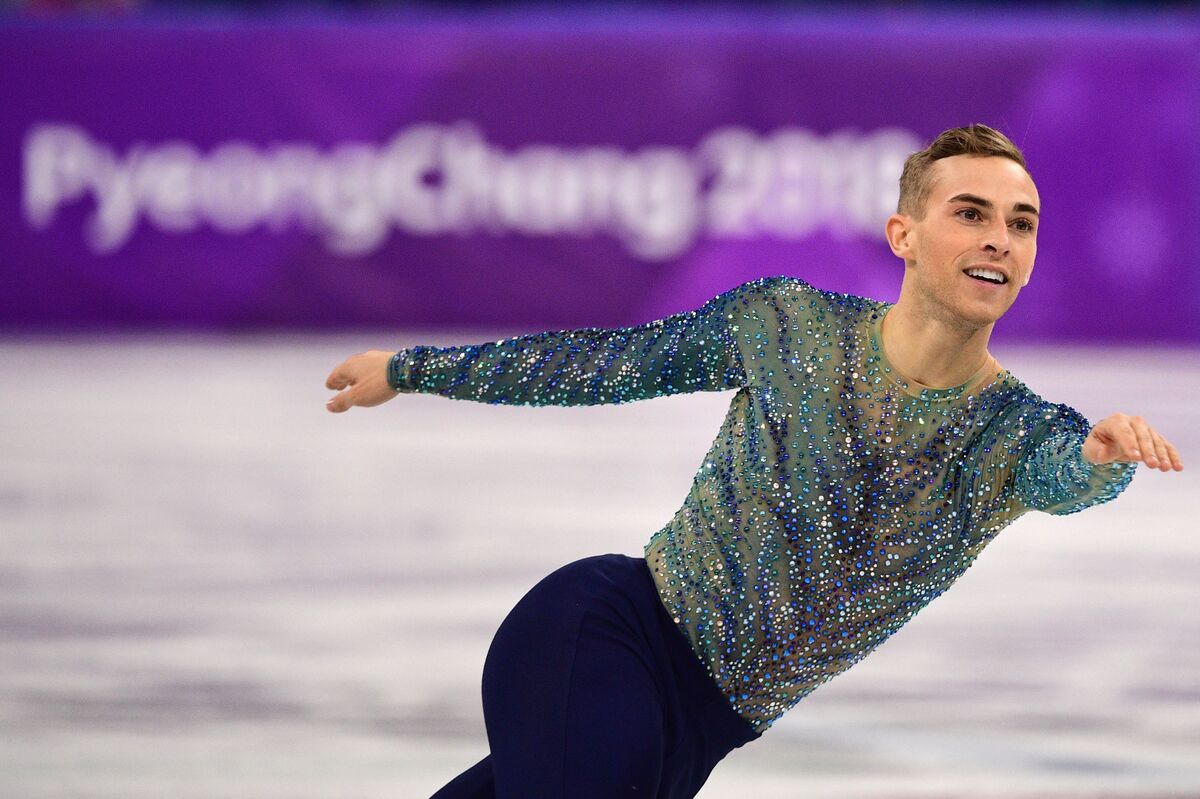 And now the game where people who have worked very hard to get where they are get to attempt something that requires no work whatsoever. It's called Not My Job. Adam Rippon was the star of the U.S. Winter Olympic team in 2018, winning a bronze medal with the national team. But he truly became famous for being outspoken, opinionated and charming as heck. Let's see if that holds up.

ADAM RIPPON: That is quite the introduction, so...

RIPPON: I'm going to do my best.

SAGAL: Yes. First of all, how are you? Where are you quarantining, with whom? And how's it going?

RIPPON: I'm quarantining alone right now. It's going well. You know, I was - I'm sort of - I'm trying to go on, like, a health journey now because probably about a week ago, I felt like my organs were competing, like, which one would fail first. So...

SAGAL: So what are you doing to stay in shape?

RIPPON: So, I mean, I don't want to brag, but three days ago, I started doing Shaun T's workout classes online.

SAGAL: Am I supposed to know who Shaun T is?

RIPPON: So Shaun T - he's, like, this choreographer and fitness guru. And so, like, maybe if you - like, I'm sure if you saw an infomercial, it would all come rushing back to you like it was yesterday. But, like, I remember these infomercials. It was, like, try the insanity workout. It was, like, a 90-day workout, and they took people - they took actual just, like, whales from the ocean, and they turned them into people. And I'm hoping to be one of those whales.

SAGAL: Speaking of your athletics, you, of course, became very well known in 2018 as a skater. Did you start skating early, like all the all the figure skaters do, when you were a kid?

RIPPON: I started when I was, like, 10 years old. So it was kind of later in life to be, like, an elite athlete, especially in a sport like figure skating, where, like, it's such - there's so many hours you need. It's not just about, like, being in physical shape. It's - like, there's such a skill involved to just being on the ice for so many hours. So it was kind of late. And I think that's why I went to the Olympics pretty late, too. I was 28 when I went.

SAGAL: Yeah, that's like a grandfather at the Olympics, right?

POUNDSTONE: Did they think that you had wisdom?

RIPPON: I told them I had wisdom because, like...

RIPPON: You know, when these younger kids are coming up, like, they were better than me. So, like, the only thing I had going for me was that maybe I wasn't a virgin. Like, that was probably...

SAGAL: And I remember once your competition ended in Korea during the Olympics, you then became a commentator, right? You were talking about other skaters.

RIPPON: So I was offered this position to be a commentator the day after I was done competing.

RIPPON: But I didn't know I was offered the job. They just assumed that I would accept it. So they announced it, and then once it was, like, announced that I was commentating, I had a few, like, calls, and it was, like, from the Olympic Committee and from, like, U.S. Figure Skating, who was, like, our governing body of the figure skaters. And I, of course, was, like, they're calling me to congratulate me. I'm, like, that's - like, for all the things I've done. Like, of course, they're calling to congratulate me.

RIPPON: They were calling me to tell me that now that I was - like, I was a media personnel, I was - I had 24 hours to leave the Olympic Village.

RIPPON: So I turned the job down.

RIPPON: It was very aggressive, yes.

RIPPON: I did because if I couldn't be in the - I wanted to support my teammates. Like, I went there as an athlete. And even though I sort of - like, I felt like I was turning into something other than an athlete while I was there, I wanted to, like, have lived that full experience as an athlete.

SAGAL: What's funny is I could have sworn I saw you doing commentary. But, of course, I'm wrong. I guess I just saw you on TV talking a lot.

RIPPON: I was probably just running my mouth like usual.

SAGAL: Do you miss it - being a competitive figure skater? I know it's extremely grueling, that lifestyle.

RIPPON: I - you know, there's a huge part of me that's, like, I absolutely never want to compete ever again because I never really enjoyed competing. I loved training, but I didn't love the competing. But one thing that I loved was the structure. It was just, like, you knew exactly what you were going to do every day. You knew when your events were. You scheduled things accordingly. It was so structured. And now, you know, like I said, you know, just a few days ago, I thought a few organs weren't going to make it to this, like, podcast, so...

SAGAL: Adam, we were researching you and looking, of course, for controversy in your Olympic career. And we found one. It turns out that you were accused at one point in your career of having a fake butt.

RIPPON: I was. I mean, what an allegation.

SAGAL: Why would anybody think that?

RIPPON: So they thought I was wearing pads so that I would - like, if I fell, like, you know, you're protected. But no, I wasn't wearing pads. I just have a fat ass.

PAPA: Shaun T can fix that.

SAGAL: The accusation, though, that was that you were using an illegal safety device, not that you were trying to make yourself look more bountiful than you actually were to impress the judge.

FARSAD: I interpreted it as, like, Kardashian situation - yeah, that they were implants.

RIPPON: Yeah. I went full injection because I thought, you know, what would make me lighter is something...

SAGAL: ...Have - when you were skating, did you have any - did you have, like, a signature move, I understand - like, something that, oh, yes, we're going to go watch Adam do this? That's what he does.

RIPPON: I have one element named after me. And it was - it's called a Rippon Lutz. And basically, it was a jump and...

RIPPON: That really tickles you.

SAGAL: And what is a Rippon Lutz?

RIPPON: Well a Rippon Lutz is when you do the - you do a jump, but instead of putting your arms, like, into your chest, you put them over your head.

RIPPON: Right. So I actually wasn't - like, I struggled with, like, the quad jumps, and I was trying to do different variations of the triple so that I could, like, stand out. So then I did that jump, and they - like, they renamed it to, like, a Rippon variation.

PAPA: Not to be confused with a Poundstone Lutz, which is the same move with two diet sodas in your hands.

RIPPON: You know, I had to make that clarification.

SAGAL: Well, Adam Rippon, it is a pleasure to talk to you. We have invited you here to play a game we're calling...

SAGAL: That's right. Your name's Rippon. We're going to ask you about rip-offs - namely, people who steal other people's ideas or products. Answer 2 out of these 3 questions correctly, you'll win our prize for one of our listeners - the voice of anyone they might choose on their voicemail. So, Bill, who is Adam Rippon playing for?

SAGAL: OK. Here's your first question. A lot of companies like to rip off expensive brands with cheap imitations. There was once a brand of fake Air Jordan sneakers that you could tell apart from the real ones only by noting what subtle difference? A, the asterisk after the name Jordan; B, the leaping Jordan icon is not wearing any pants; or C, the sneakers were made of balsa wood.

SAGAL: You went right for that, and you were right...

SAGAL: Carefully examine it, you can see sort of the crease between the buttocks. He was not wearing pants. Very good. Very good, Adam. All right.

SAGAL: Next question - a lot of fake products and brands originate in China. In fact, if you went to China, you could find fake versions of which of these? A, American movie stars such as, quote, Angelina Wowie (ph) and George Cloney (ph)...

SAGAL: ...B, entire European cities like Paris, London and Venice; or C, fake African wildlife, which are all just dogs with things like rhino horns and elephant trunks attached with Velcro?

RIPPON: Oh, wow. And the terrible thing is I could see all of these things happening. But I'm going to go with fake African wildlife.

SAGAL: I'm afraid it was actually fake cities. You can go to China and see...

SAGAL: ...Complete replicas of the centers of Paris with the Eiffel Tower, Venice with canals...

RIPPON: We should all go.

SAGAL: All right. Now, you still have one more chance. If you get this right, you'll win everything, Adam. Here we go.

SAGAL: Now, The Asylum is a very well-known studio that produces mockbusters (ph). Those are the direct-to-video rip-offs of big Hollywood movies that used to be meant to confuse people who were browsing at video stores. Which of these is a real movie made by The Asylum? Was it, A, "Snakes On A Train;" B, "Transmorphers;" or C, the "18-year-old Virgin?"

RIPPON: Is it "Transmorphers?"

SAGAL: All three of them are real. Those were all...

SAGAL: ...Rip-off mockumentaries made by The Asylum. Bill, how did Adam do on our quiz?

KURTIS: Two out of 3, and you won the crystal ball, Adam. Welcome.

SAGAL: Oh, my God. It's amazing. All of a sudden, people are throwing stuffed animals at Adam. We don't even know where they're coming from.

SAGAL: Adam Rippon is a former Olympic figure skater. He's the host of "Useless Celebrity History," which is streaming right now on Quibi.

Adam Rippon, thank you so much for joining us. You're such a delight to talk to. What a pleasure.

SAGAL: Thank you so much, and take care.

SAGAL: In just a minute, Bill recites an ode to his favorite piece of furniture. You don't want to miss it. Call 1-888-WAIT-WAIT to join us on the air. We'll be back in a minute with more of WAIT WAIT... DON'T TELL ME from NPR. **