Accessibility links
Greg Daniels Moves His Comedic Spotlight To Absurdity In The Afterlife With Upload The Emmy Award-winning television writer, director and producer has spun comedy from the threads of ordinary life for 30 years. Now he's shifting focus to an imagined "life" after death in Upload.

Listen · 5:54 5:54
Greg Daniels Moves His Comedic Spotlight To Absurdity In The Afterlife 5:54 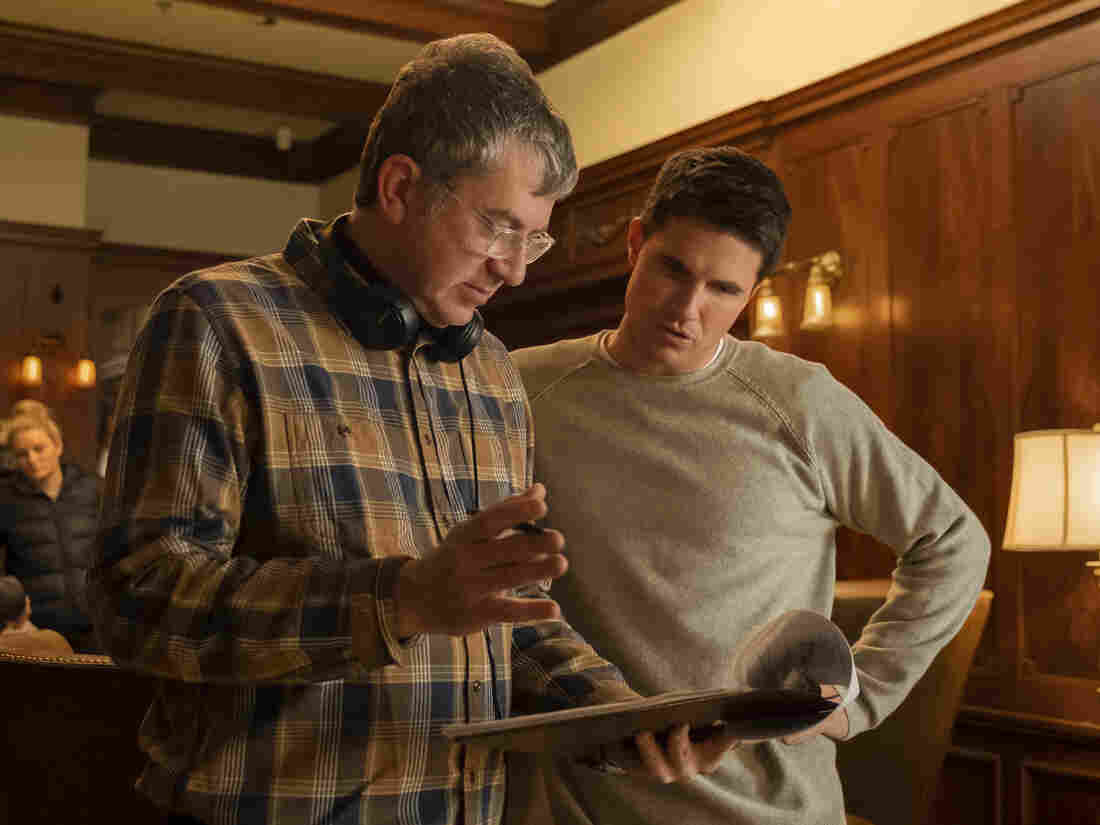 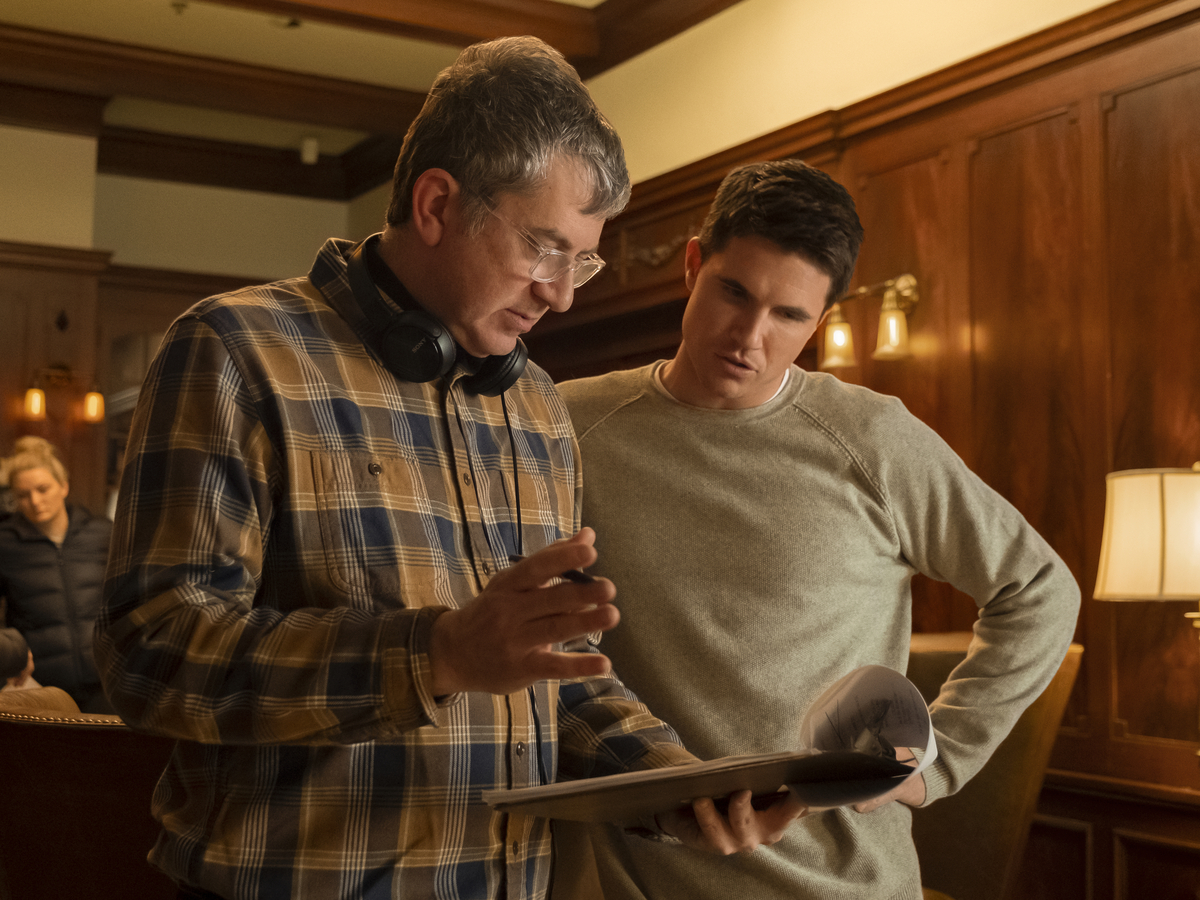 Greg Daniels talks over a script with actor Robbie Amell on the set of Upload.

For more than 30 years, Emmy Award-winning television writer, director and producer Greg Daniels has spun comedy from the threads of ordinary life, turning its frustrations and awkward moments into such hit shows as The Office, Parks And Recreation, and King of the Hill.

Now he's reflecting on these notions again in Upload, a futuristic comedy on Amazon Prime — but this time they play out in the afterlife too. He's also behind the upcoming Netflix satire Space Force, launching May 29, starring Steve Carell.

Greg Daniels' humor has all the makings of the British comedies he reveres, including Fawlty Towers and the original, British version of The Office.

"There's something wonderful about the awkwardness of it and their kind of enjoyment of a pathetic situation that always appealed to me," Daniels says.

Here's a little Greg Daniels trivia: He never expected to make an American version of The Office. Back in 2003, while he was an executive producer on the show King of the Hill, he was dying to meet the series' creators Ricky Gervais and Stephen Merchant. He says he just wanted "to talk to them about it as a fan," Daniels says. "But I couldn't meet them as a fan without pretending I wanted to adapt the show. So I had to do that." Turns out, Daniels, Gervais and Merchant hit it off. They were also fans of The Simpsons. "Ricky's favorite Simpsons episode was Homer Badman, which I had written," Daniels recounts. 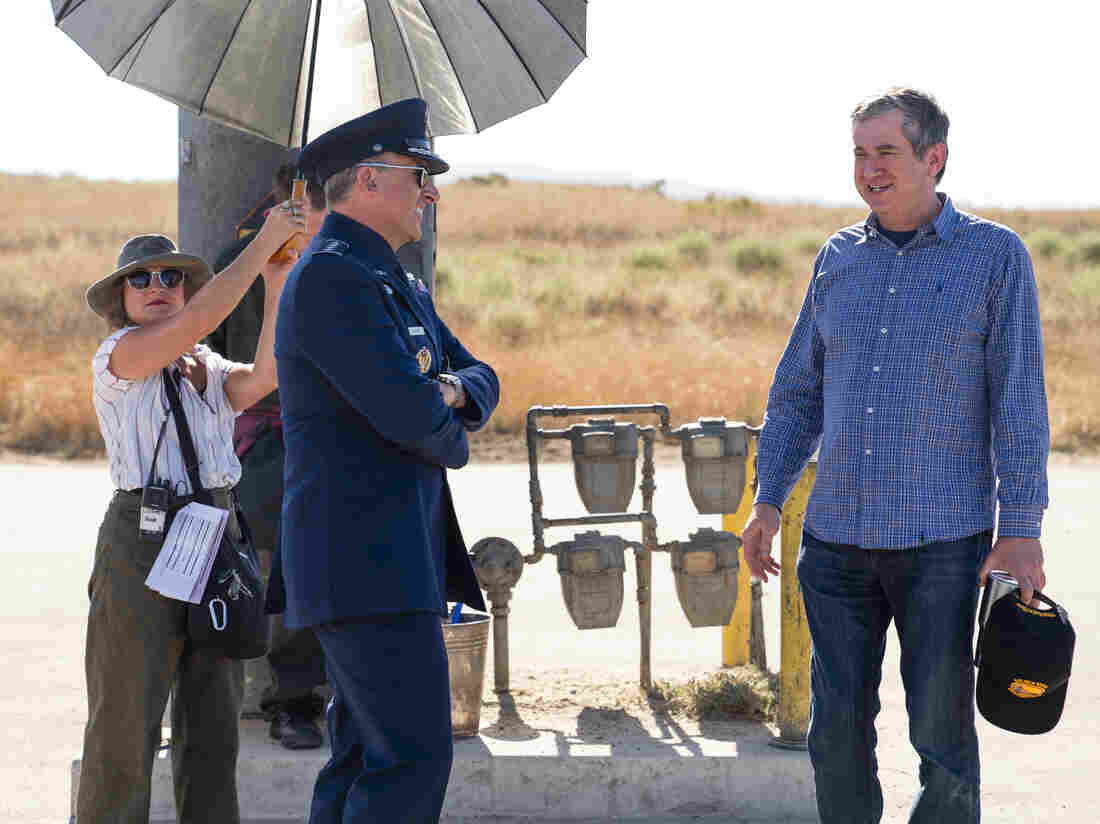 Steve Carell, left, speaks with Greg Daniels on the set of Space Force. The two also worked together on The Office. Aaron Epstein/Netflix hide caption 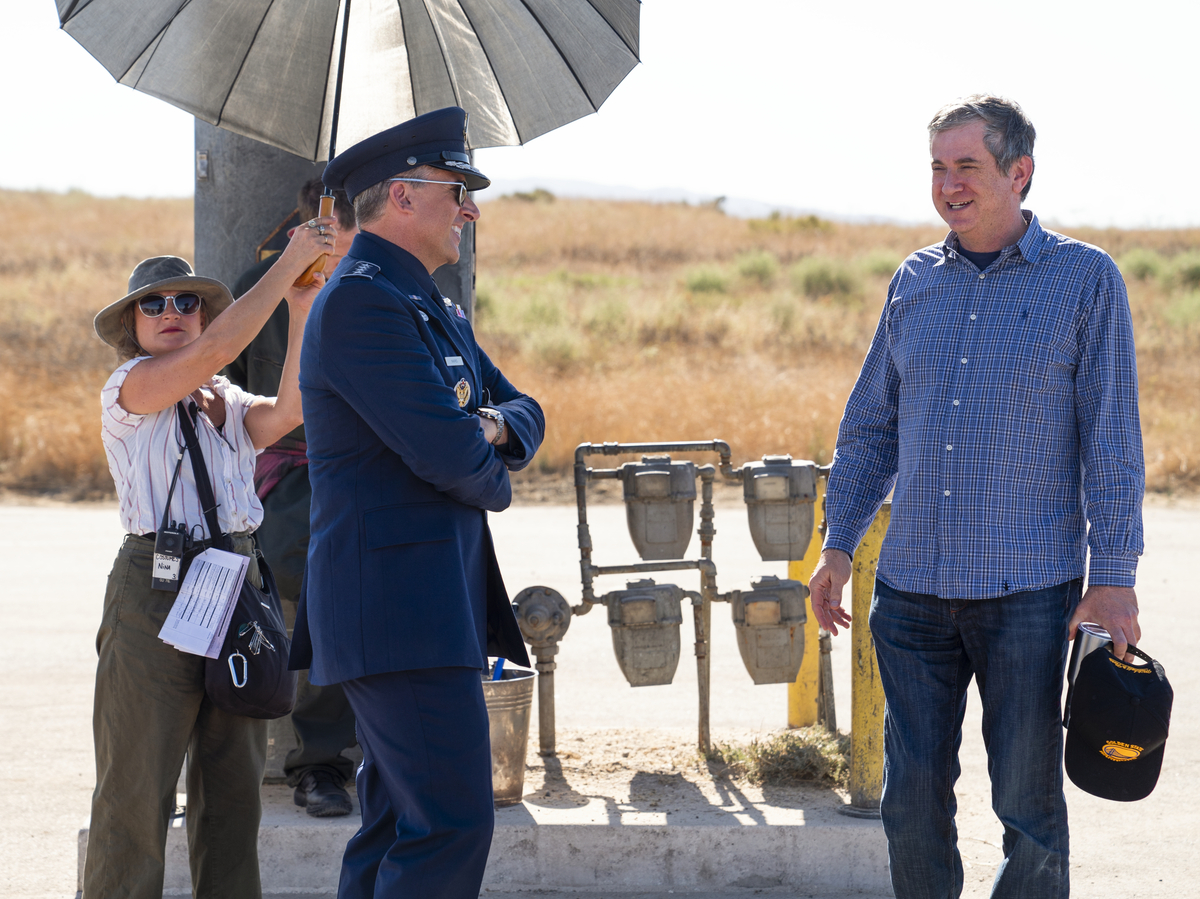 Steve Carell, left, speaks with Greg Daniels on the set of Space Force. The two also worked together on The Office.

That scheme of meeting these Brits he admired is pure Greg Daniels, says his friend and King of the Hill co-creator Mike Judge: "Yeah, he'll do stuff like that. He gets it from his dad. You know the story about his dad and the Olympics, right?"

We do now! In 1968, Greg Daniels' father competed in the Olympics even though he was not a professional athlete. He worked in commercial radio in New York. When Aaron Daniels learned the United States did not a have team to compete in the little-known racquet event fronton, he asked for time off, joined some fellow squash players, practiced like crazy, and ended up in the 1968 Olympics in Mexico City.

Greg Daniels says he "owes a lot" to his father: "Definitely my dad is a very funny storyteller. He tells self-deprecating, involved, funny stories." Daniels adapted one such story for an episode of Seinfeld called The Parking Space. In a moment that's all too familiar to anyone who's competed with another driver for that hard-to-find spot, George squares off with an equally feisty man. Daniels says this really happened to his dad. Daniels tells the story:

"He had a car when we grew up in New York City, but he didn't have a garage. So he had to repark it every two nights and he would drive the car around for 40 minutes. One night he found an empty parking space. He started to back into it and the guy behind him tried to steal it and nose into it. And they just sat there for hours because none of them would give. And he saw a friend walk by and he had the friend call my mom. And my mom made him dinner and brought it to him at the parking space."

For characters to work in a comedy, Daniels says they need "some kind of foible or blindness." In the case of Hank Hill, the protagonist in King of the Hill, Mike Judge says he and Daniels were on the same page: Hill is "just a guy" trying to "deal with the modern world."

"Greg had a line which I thought was pretty great," Judge says. "Something like 'Andy Griffith is back and he's pissed off.'" Take the time Hank tries to get help in one of those big box stores. Been there?

Before King of the Hill, Mike Judge had huge success with Beavis and Butt-Head, animation that he says didn't orignally have much of a story arc. Judge says it was Daniels who helped him learn to write stories for an episodic TV series with tips on how to "structure a story" and how "not to get hung up on a joke at the expense of a story."

Judge says Daniels is also good at streamlining a story: "When you think it's all so complicated, reducing it down to very simply what the problem is and how to resolve it and do it in a funny way."

The problems in Daniels' upcoming Netflix show Space Force include a military leader who doesn't listen to the scientists around him. His new sci-fi comedy Upload explores the inequalities — and inhumanity — that emerges as advanced, expensive, digital technologies hit the market.

"These technologies are introduced and they all seem great. And then, you know, the law of unintended consequences kicks in and they are kind of flawed or sometimes outright evil when they're actually executed," Daniels says.

In Upload, only the wealthy get to experience an idyllic afterlife in the expensive, leafy resort called "Lakeview." Even the commercial for Lakeview feels eerily familiar.

The world of this comedy is strange and unsettling, not unlike the world we're living in now. Daniels admits he's just as preoccupied with the pandemic as everyone else.

"It's very weird to be out trying to get people to watch comedy shows now. So I guess the hope is that it's a helpful distraction," he reasons.

People have been finding comfort in Greg Daniels' past "distractions." The Office is one of Netflix's most popular shows.

Nina Gregory edited this piece for radio; Meghan Sullivan edited for the web.