Accessibility links
For Some, Zoom Bar And Bat Mitzvahs Highlight 'Most Meaningful And Memorable Moments' This spring, congregations are reimagining how to celebrate bar and bat mitzvahs in light of the coronavirus pandemic. Some of these Jewish coming of age ceremonies are going online. 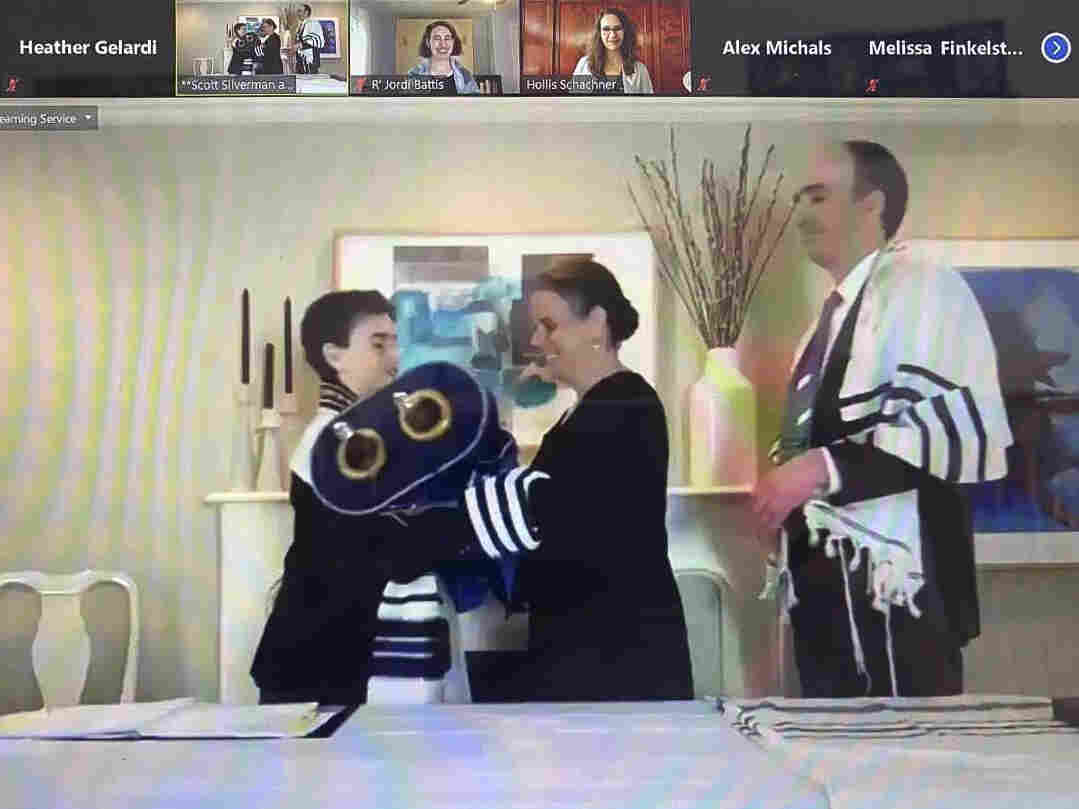 Gabe Silverman is sheltering at home with his family and this is the first Zoom mitzvah for Temple Shir Tikva, a congregation west of Boston. The Silvermans hide caption 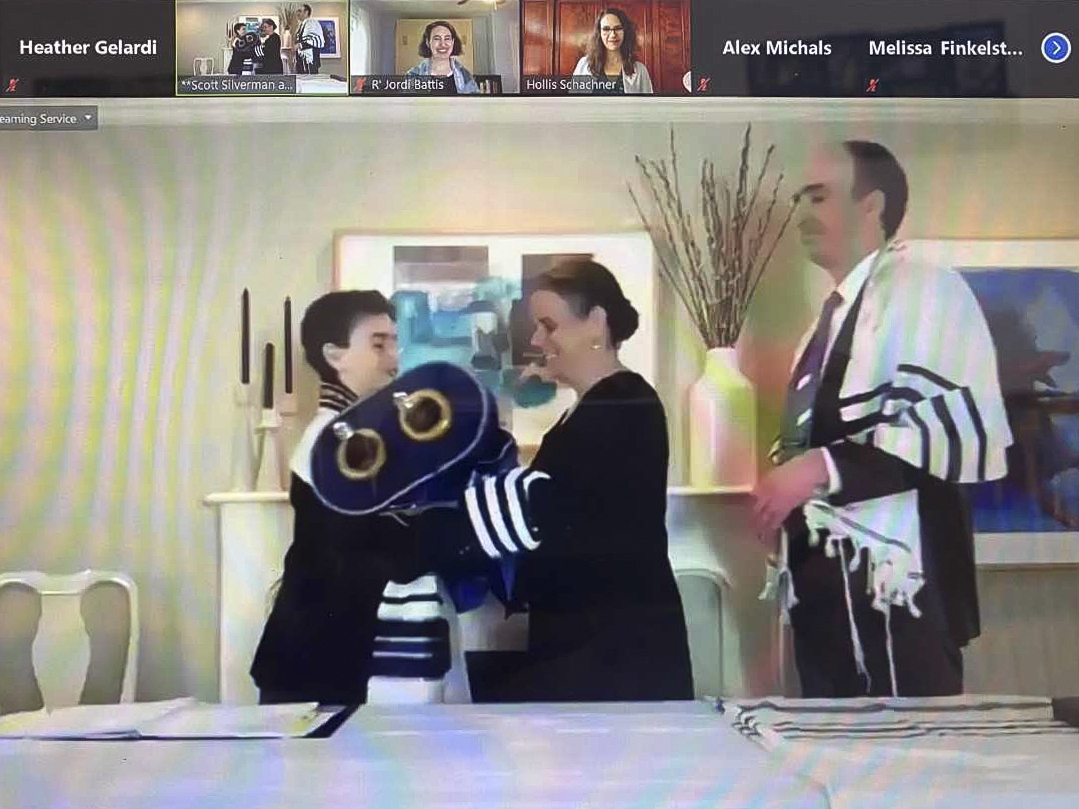 Gabe Silverman is sheltering at home with his family and this is the first Zoom mitzvah for Temple Shir Tikva, a congregation west of Boston.

As Gabe Silverman chants his Torah portion, he's intensely focused on every word. It's the culmination of months of study and the high point of his Bar Mitzvah service. The same is true for almost every 12- or 13-year-old celebrating a bar or bat mitzvah.

"For the Torah service, I was very nervous about, like, losing my place," Gabe said. "It's so big and all the letters look the same, basically."

The Torah is rolled open on a table in his family's living room and positioned in front of a computer camera. Gabe is sheltering at home with his parents and younger brother and this is the first Zoom mitzvah for Temple Shir Tikva, a congregation located 20 miles west of Boston.

May and June are popular months for bar and bat mitzvahs and many congregations schedule the Jewish coming-of-age ritual two to three years in advance. It takes time to learn Torah portions and prayers and to book venues and caterers for the celebration afterwards.

Now, during the coronavirus pandemic, congregations are reimagining the ceremony and bringing it online.

Rabbi Danny Burkeman calls upon a few family members. They temporarily appear on screen for aliyot -- blessings over the Torah reading. Gabe's grandmother Helaine Silverman is honored with the first of the aliyot. Before Helaine begins, Burkeman reminds her to switch on her camera and unmute.

Burkeman leads the service remotely from his synagogue's main sanctuary. He's doing double duty, making sure the ceremony follows tradition and monitoring all the technology involved.

"Our aim was to create for them as much as possible a digital bar mitzvah experience," Burkeman said. "And we use the word digital because it wasn't virtual. There was nothing virtual about it. It was real." 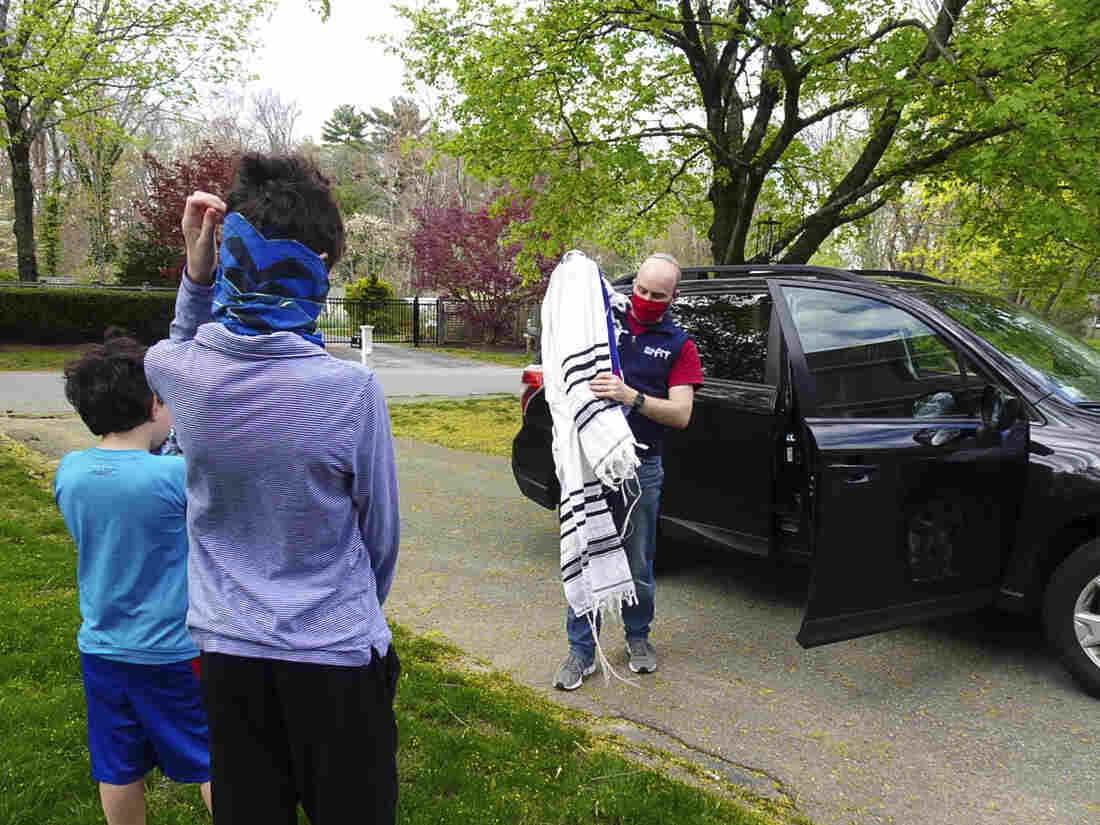 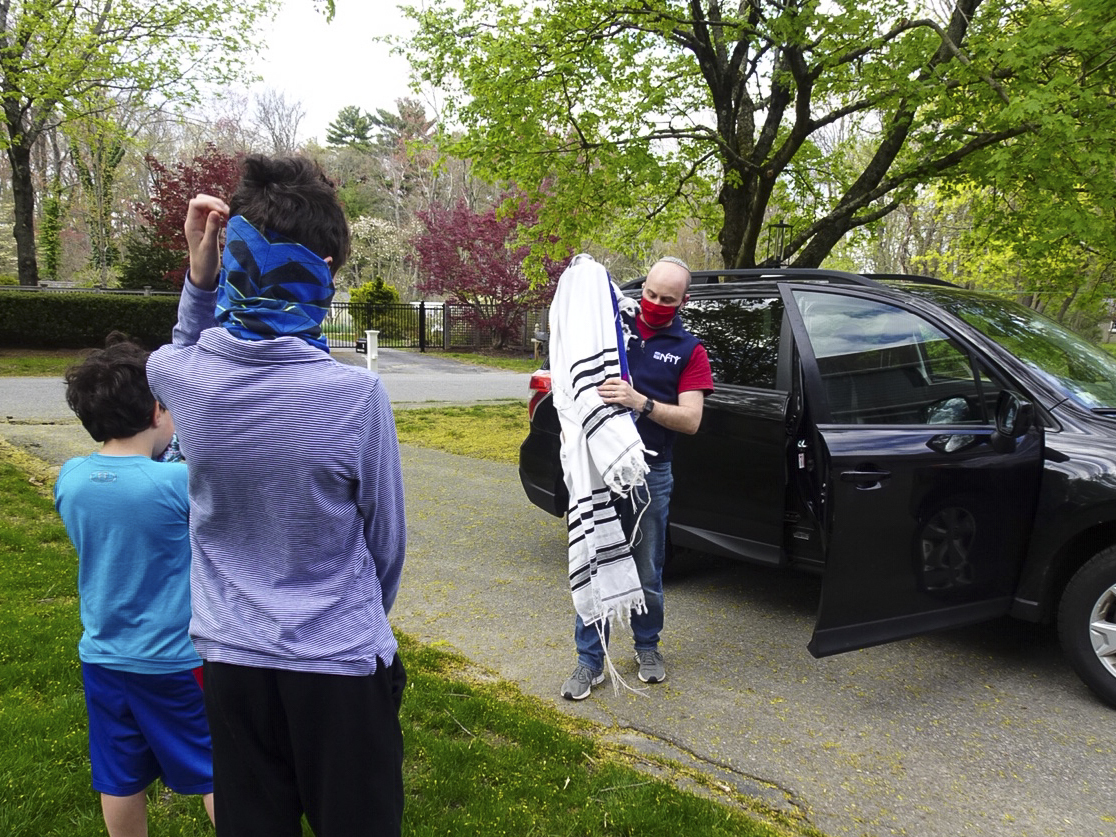 The Silvermans thought about postponing until the end of the year, but two weeks before the big day, they decided to go forward on Zoom on the original date. At that point, the most pressing question became: What elements of the bar mitzvah mattered most?

Gabe wanted to read from an actual Torah, not the sheets of paper he used for practice. Two days before his bar mitzvah, Burkeman made a special delivery.

"Rabbi Danny just came to our driveway with the Torah seatbelted in the front seat," Gabe recalled. "It was wrapped up, seatbelted, and then he handed it off to my dad."

At his bar mitzvah, as soon as Gabe finishes reading from that Torah, he looks at his parents, smiles and noticeably exhales. For him, the toughest part is over.

"I felt really good that we'd been able to give him an experience," Burkeman said. "And you could see in his face and in the face of his family that this was meaningful for them." 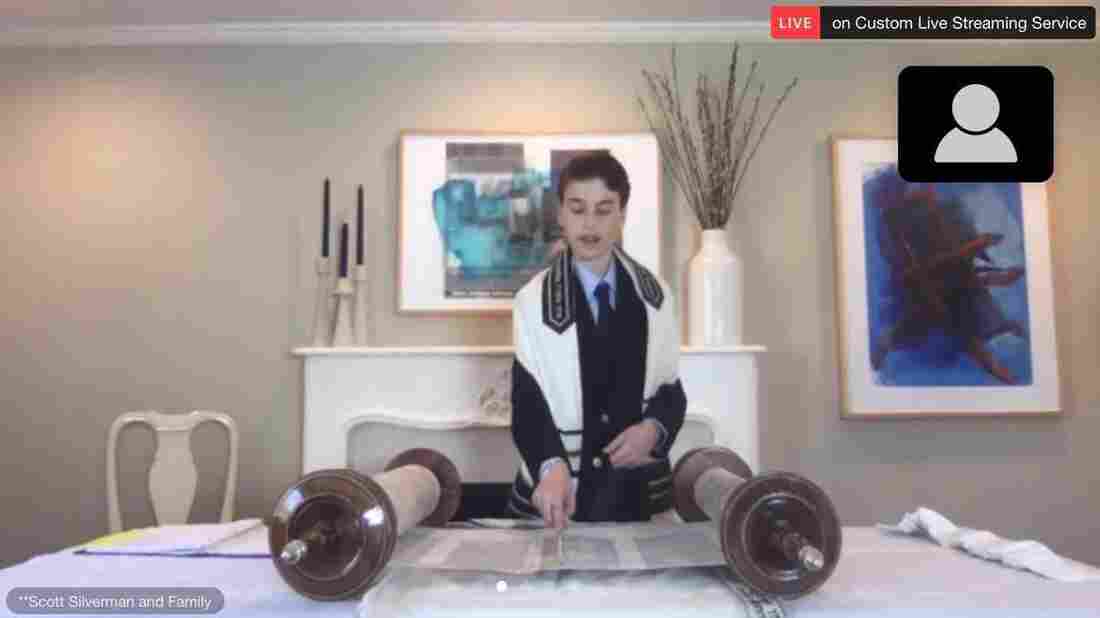 Gabe wanted to read from an actual Torah, not the sheets of paper he used for practice. The Silvermans hide caption 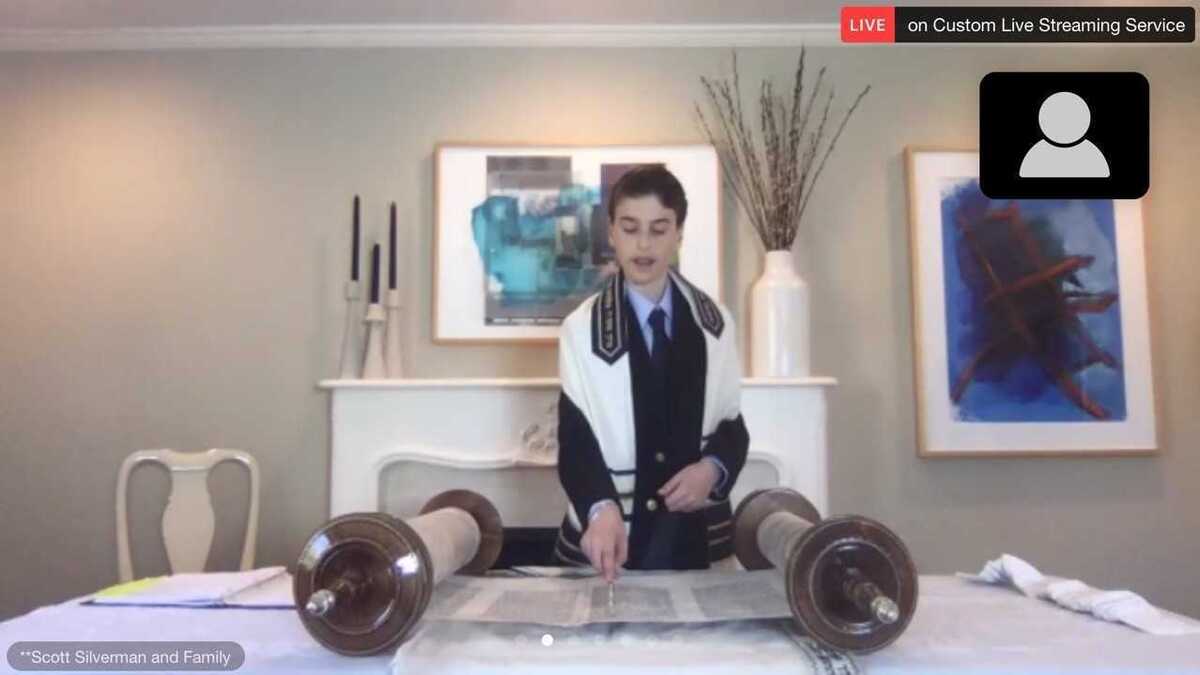 Gabe wanted to read from an actual Torah, not the sheets of paper he used for practice.

After the ceremony, family and friends turn on their cameras and unmute. They wave and hold up congratulatory signs and shout "Mazel Tov!"

Reflecting on the bar mitzvah, Gabe's mom Erica is happy with the whole online event, but she knows it's not for everyone.

"I'm very compassionate for people who are making the other decision to postpone and do it in person," she said. "But for us, in that moment, it was the right decision. It was more special because of the circumstances."

As she talks, Erica sits next to Gabe and her husband Scott. The Torah is still there, a couple feet away on the dining room table.

She glances over at the scroll and adds, "I feel very complete by what we experienced."

Erica and Scott wonder if they'll need to celebrate with a big bar mitzvah party when family and friends can gather again. And Gabe?

The pandemic has made the service — the actual religious ritual — the place where the most meaningful and memorable moments happen.