Accessibility links
Review: 'Felix Ever After,' By Kacen Callender Kacen Callender's new young adult novel centers on a queer, trans teen trying to find out who's behind a traumatizing transphobic act — a quest that takes him on an emotional roller coaster.

Finding Love — And Feeling Worthy Of It — In 'Felix Ever After'

Finding Love — And Feeling Worthy Of It — In 'Felix Ever After' 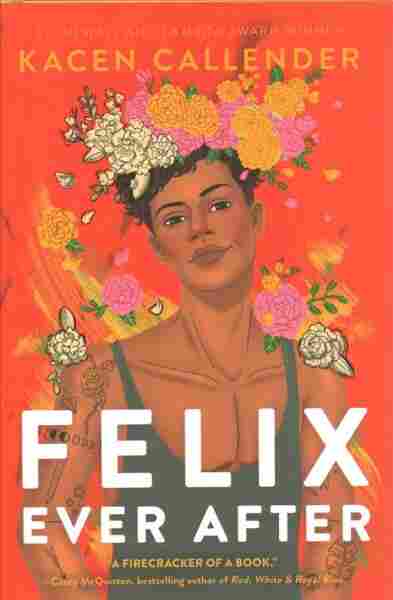 It feels political these days, just to exist. That's especially true if you're a black, transgender, queer teenager on a scholarship at an elite Brooklyn high school for the arts — and in competition for one slot at Brown University. As if adolescence wasn't tricky enough already!

When we meet the eponymous protagonist in Felix Ever After, he has been out as trans for several years and found himself a squad comprising other LGBT youth of ethnic backgrounds mixed up in various ways. (This is set in modern-day New York, after all.) But lest all this sound like too idealized a cast, the propelling mystery of this tightly-written YA novel surrounds who at school is behind a traumatizing transphobic act against Felix. The quest to find out takes us, and Felix, on an emotional roller coaster to explore his own identity and his relationships with his friends at the same time.

And, of course, there's love. "Young love. What else is there to say?" one adult character remarks, halfway through the book. It turns out there's plenty left to say in this rendering, because it is complicated by layers and layers of identity work. Felix's fumbling attempts to figure out what love means and what it's supposed to feel like — while learning he's worthy of it — make for the novel's most anxious and heart-warming bits.

Witnessing a romance come alive as we read text back-and-forth reminds me of the work of Mary H.K Choi and Sally Rooney, and author Kacen Callender deepens a central epistolary relationship deftly, making us feel like we're let in on something so authentic and quietly groundbreaking that we shouldn't be watching.

And what can compete with the intensity of that age — when you're discovering who you really are, finding first love and learning that you're worth it? The emotional journey of young love gives the novel a universal feel, despite the multiple identity labels that make life for Felix so challenging.

He's grappling with gender identity, which the book skillfully tackles. Readers will likely come away with new understanding and empathy for those who don't — or didn't — have labels for how they identified, until a few years ago.

And class comes into play, as Felix lives on the poverty line while his friends enjoy Succession-level wealth in New York, complete with extra homes and caterers on call. But the book leaves the potentially interesting area of Felix's race — he's black — untouched.

All of those boxes Felix checks, in addition to being abandoned by his mother early on, can make the character hard to believe if you're in parts of the country where white is still the dominant racial group and boy and girl binaries are the only socially acceptable options.

But today's teens are part of the most mixed, gender-bending generation ever, and they should get the spotlight in more stories. And ultimately, Felix's empowerment by the book's cinematic end wouldn't feel so hard-won and well-earned without all of his complicated identity issues.

Felix's empowerment by the book's cinematic end wouldn't feel so hard-won and well-earned without all of his complicated identity issues.

"How do we find and cultivate pride for each other and ourselves when we're in a world that seems like it doesn't want us to exist?" Felix asks, early in the novel. One approach goes: You can't be what you can't see. In a foreword, Callender — who is nonbinary — says that something changed for them when they saw a transgender character for the first time, on the show Degrassi: The Next Generation. "He made me realize, suddenly, that though he'd been assigned female at birth, he'd been able to become who he really was," Callender writes. "That episode changed my life."

Now they hope this kind of tale, one that centers around characters who aren't the cisgender, heterosexual kids previous generations found in the library, can reach readers who yearn to be seen, trying to better understand themselves and realize new possibilities. As one character says in the novel, "The issue is that we've never really gotten to see our own stories ... We have to make those stories ourselves."

Becoming and unbecoming. Discovering ourselves and compassion for ourselves. It's the work we all do throughout our lives, regardless of how we identify. In that sense, Felix Ever After may be classified as "young adult," but its central themes are very adult, indeed.