Accessibility links
Economic Crisis Is Historic, Not Another Great Depression, Experts Say The speed and scale of the economic crash have drawn comparisons to the Great Depression. But this downturn should be shorter, former Fed Chairman Ben Bernanke and other economic historians say. 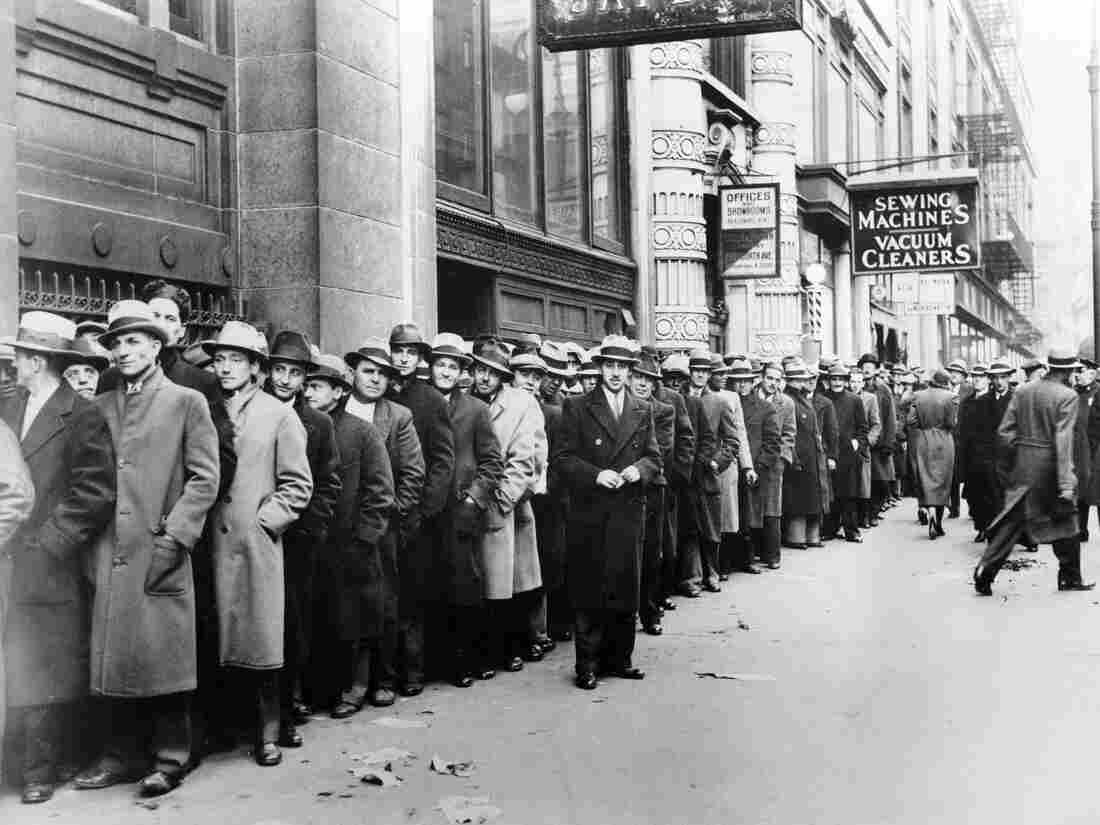 Unemployed people wait outside the state Labor Bureau in New York City in 1933. The current economic crisis has drawn comparisons to the Great Depression, but experts say this downturn should be shorter. AP hide caption 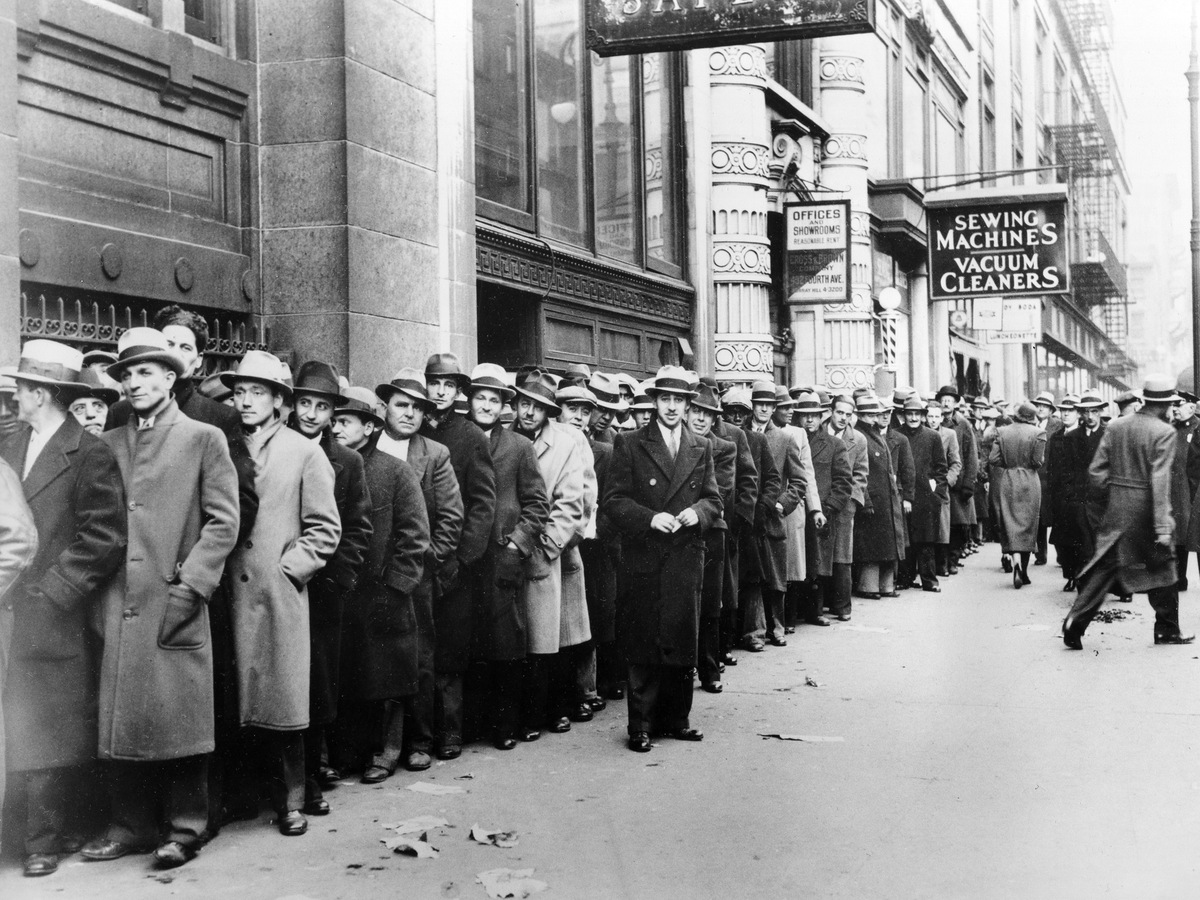 Unemployed people wait outside the state Labor Bureau in New York City in 1933. The current economic crisis has drawn comparisons to the Great Depression, but experts say this downturn should be shorter.

With the U.S. economy in free-fall, a lot of forecasters have been digging deep into the history books, looking for a guideposts of what to expect. Often, they've turned to the chapter on the 1930s.

"It's not a very good comparison," he cautioned.

Bernanke, who is a student of the Great Depression, says that crisis was triggered by a financial meltdown and made worse by bad policy choices, including the decision by his Fed predecessors to raise interest rates.

Perhaps most importantly, the Depression dragged on for a dozen years. While Bernanke doesn't expect to rebound from the current crisis in the next six months or so, he doesn't see it stretching out indefinitely, either.

"If all goes well, in a year or two we should be in a substantially better position," Bernanke told an audience at the Brookings Institution last month.

That optimistic view is supported by a different historical example from more than a decade before the Great Depression: the 1918 flu pandemic, after which the U.S. economy bounced back relatively quickly.

"I think there is quite a lot to be hopeful for," said Carola Frydman, an economic historian at the Kellogg School of Management.

What The 1918 Flu Can Teach Us About Handling Today's Pandemic

The so-called Spanish flu pandemic killed an estimated 50 million people worldwide, including hundreds of thousands in the U.S. It also prompted some of the same "social distancing" measures we've adopted against the coronavirus, with shuttered bars, schools and churches.

Still, the economic fallout was "mostly modest and temporary," Frydman wrote. And the U.S. enjoyed strong growth in the decade that followed.

She believes that could happen this time as well.

"As soon as people feel confident again interacting and being able to go about their business, I would not expect the economic fallout to last a lot longer than that," Frydman told NPR.

Of course, no one's certain how long it will take for people to feel comfortable shopping or traveling again — or how many businesses and families might go under in the meantime.

Congress Has Approved $3 Trillion For Coronavirus Relief So Far. Here's A Breakdown

In 1918, government spending on World War I helped make up for some of the lost private demand, Frydman said. No one is advocating another world war. But Fed Chairman Jerome Powell said the federal government might have to spend more than the trillions it's already shelled out to keep businesses and families afloat.

"Additional fiscal support could be costly but worth it if it helps avoid long-term damage and leaves us with a stronger recovery," Powell said during an online forum sponsored by the Peterson Institute for International Economics.

Other government policies — including protectionism — could hamper the recovery. President Trump has long advocated higher trade barriers. He's getting less resistance thanks to the pandemic.

"These stupid supply chains that are all over the world — we have a supply chain where they're made in all different parts of the world and one little piece of the world goes bad and the whole thing is messed up," Trump said during an interview with Fox Business this past week. "I said we shouldn't have supply chains. We should have them all in the United States."

'A Community Of Desperation' Finding Sympathy And Solidarity In Dorothea Lange

Here the Great Depression does offer a useful lesson. In the 1930s, the U.S. and other countries turned their backs on trade, adopting steep tariffs in an effort to prop up their Depression-scarred economies. It backfired.

"And that, economists have come to believe, contributed to how long the Great Depression actually lasted," said Chad Bown of the Peterson Institute for International Economics. "It made it very, very difficult for countries to grow their economies again and use trade to help them get there."

Bown acknowledges that protectionism is a natural reflex at a time like this, but he warns it's counterproductive. The coronavirus does not have to touch off another Great Depression, but with misguided policy, it could.