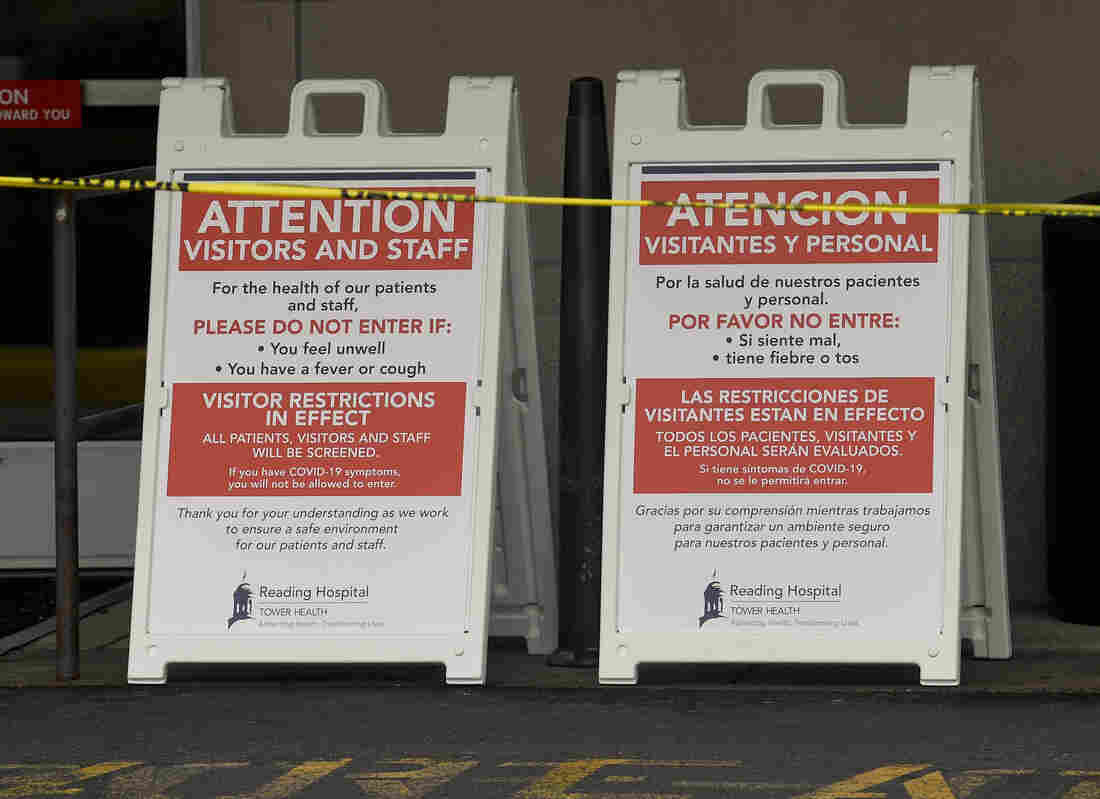 Signs in English and Spanish outside a hospital in West Reading, Pa., advertise visitor restrictions as a precaution against the spread of COVID-19. Ben Hasty / MediaNews Group via Getty Images hide caption 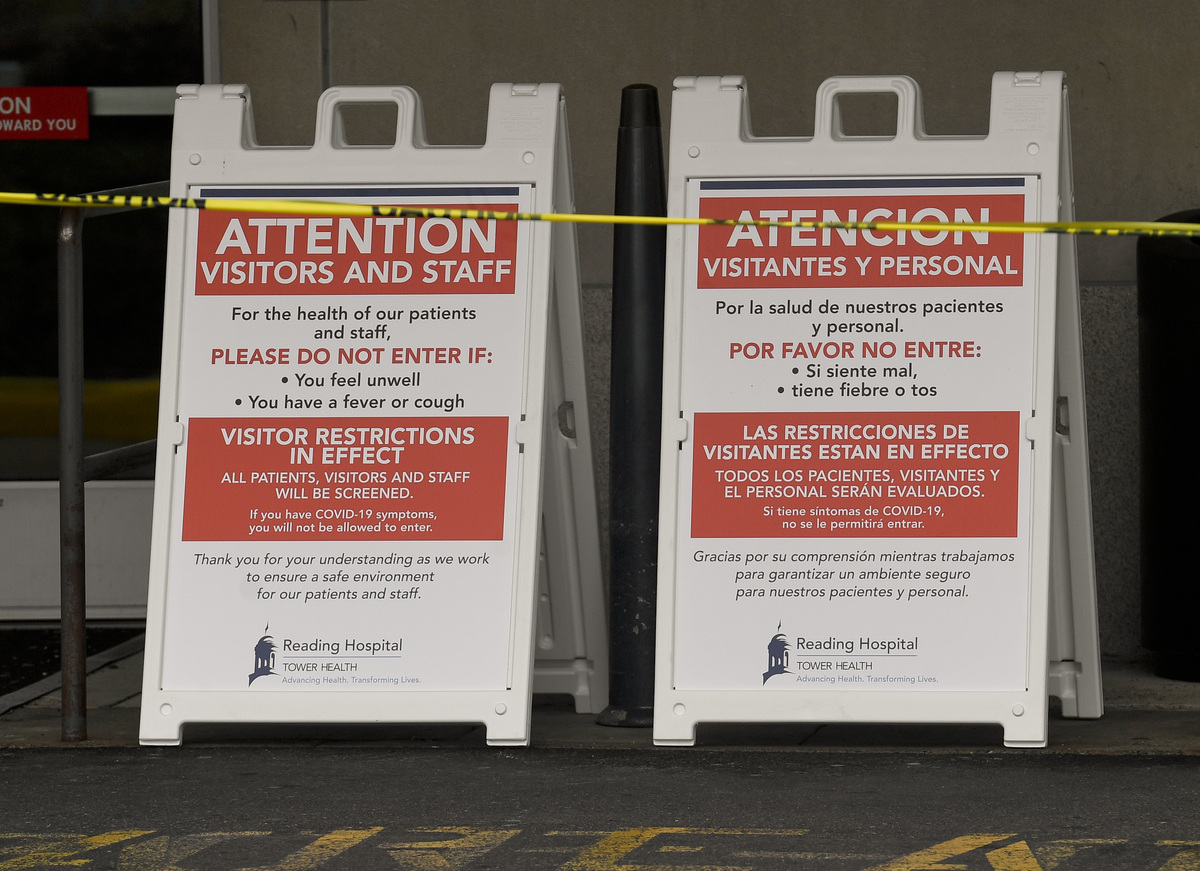 Signs in English and Spanish outside a hospital in West Reading, Pa., advertise visitor restrictions as a precaution against the spread of COVID-19.

When Mary Henderson, a 63-year-old woman with Down syndrome, died in a Boston-area hospital last month, her family says she was confused and alone. Her siblings wanted it to be different.

She had tested negative for COVID-19, but the hospital set tight restrictions on visitors, a step common in states and hospitals around the country, to prevent the spread of the virus.

Henderson had Alzheimer's, an issue for as many as 50% of people with Down syndrome in their 50s and 60s, and as a result had difficulty speaking clearly and often got confused. During other recent hospitalizations, family members and staff at the group home where she lived would visit to comfort her but also help communicate with doctors.

In the hospital this time, Henderson pulled out her IV and her oxygen tube. Nurses in the ICU eventually tied large mittens to her hands to stop her.

"It made my heart ache not to be able to be there for Mary," says her older brother Dick Henderson.

"Any other time she was in the hospital, I was there every single day to make sure everything was going all right," says her sister, Kathy Hines.

Henderson died April 13, without her family, at the Norwood Hospital in Norwood, Mass., the same hospital where she'd been born.

Many people with disabilities and elderly people who have difficulty communicating rely on family members or a direct service professional to help them get medical care.

NPR has learned that the Office for Civil Rights at the U.S. Department of Health and Human Services has opened an investigation of a similar visitation policy in Connecticut.

The inquiry stems from a complaint filed by four disability groups that say that when family and support workers are banned, many elderly and disabled people can't make informed medical decisions, which can affect their care.

OCR investigates complaints about discriminatory health care policies. Last month, it announced settlements in Alabama and Pennsylvania after investigating allegations that elderly and disabled people were denied equal access to treatments for COVID-19. Those rulings then became guidance to states around the country. An OCR action on hospital visitor policies could set national practice, too. 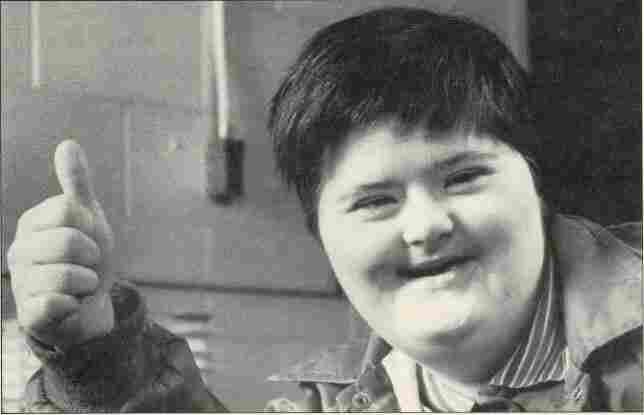 A family portrait of Mary Henderson. Once she lost her short-term memory and her ability to speak clearly, she relied upon family and the staff at her group home to communicate with doctors. But when she went to a hospital last month, they weren't allowed in. The Arc of South Norfolk hide caption 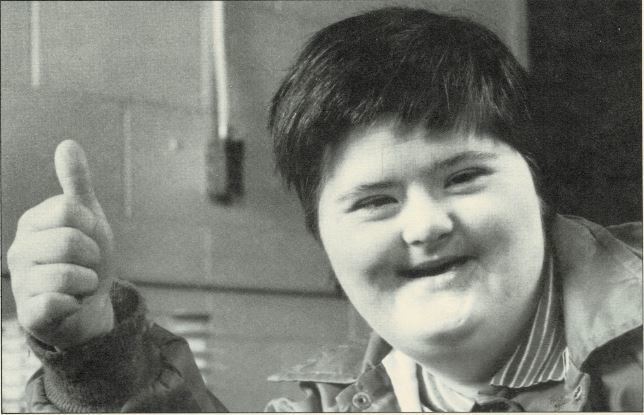 A family portrait of Mary Henderson. Once she lost her short-term memory and her ability to speak clearly, she relied upon family and the staff at her group home to communicate with doctors. But when she went to a hospital last month, they weren't allowed in.

The Arc of South Norfolk

OCR would not confirm NPR's reporting that it had opened an investigation in Connecticut. But in a statement to NPR, Roger Severino, the director of the civil rights office, said states and hospitals need to set policies that balance safety while recognizing the needs of disabled and elderly patients.

"Our recent enforcement actions," he added, "show our commitment to protecting older persons and persons with disabilities from a dog-eat-dog worldview that would deprioritize people from receiving healthcare based on unlawful stereotypes about their relative worth."

There has been other pressure on HHS to act. Pennsylvania Sen. Robert Casey has called upon the head of the Centers for Medicare & Medicaid Services, which oversees health care facilities that get federal funding, to tell hospitals to ease their limits on visitors to some elderly and disabled patients.

"This decision removes an essential member of the care team," Casey wrote in an April 30 letter to Seema Verma, the CMS administrator. Family and caregivers, he wrote, know the "extensive medical history of the individual" in the hospital and can help provide "better communication with the patient and more positive health outcomes."

The Senate Special Committee on Aging, of which Casey is the senior Democrat, will hold a hearing on Thursday about care for older people during the pandemic. The issue of hospital visitation is expected to be addressed.

In Massachusetts, Dick Henderson describes his sister Mary as lively and social, someone known in her small town for greeting family and friends with a thumbs up or a peace sign. "She was a huge part of the family," he says. "The rock star of the family. She was the youngest of six, but she was the boss."

Before Mary lost her short-term memory and her ability to communicate clearly, she wasn't afraid to let people know how she felt. At Mass one Sunday, in her customary seat in the front pew, she felt the priest's sermon was going on a bit long. She tried to get his attention by repeatedly jamming her hands together in the signal for "timeout."

"OK, Mary Henderson just gave me my cue," the priest said. "I've got to cut this short."

Henderson's family feels she got good medical treatment in the hospital. Doctors and nurses communicated almost daily with family members. And twice a nurse held a phone up to Mary Henderson in her hospital bed so she could hear her sister Kathy's voice.

"We felt badly that we couldn't be there to support her, help her communicate her feelings and her symptoms, too," says Dick Henderson. "Because we could probably figure out what she was feeling a little bit better when they were asking questions."

A spokesman for the hospital sent NPR a statement: "In conjunction with the Massachusetts Department of Public Health and for the protection and safety of our patients and caregivers, all Steward Health Care hospitals in Massachusetts began restricting visitors on March 17 except in limited cases. We do allow exceptions for end-of-life visits."

Lawyers for the Disability Law Center in Massachusetts wrote to the state's Department of Public Health to ask it to set statewide standards — instead of leaving it to hospitals — and to ask that family and support workers be allowed to visit people in hospitals who need assistance. Hospitals have a legal obligation to clearly advise patients and to get their informed consent for treatments, attorneys Hillary Dunn Stanisz and Rick Glassman say.

And people with disabilities have a legal right, in federal civil rights law, to have someone in the hospital who can help them communicate.

That assistance makes the job of medical staff easier, says Glassman. "If you don't know them," he argues, "if you're in a chaotic hospital environment during a global pandemic and you need to interpret what their behavior is."

The limitations on visitors at that hospital are common across the country. A few states, including some in hot zones such as New York and New Jersey, and a few hospitals, starting with Rush University Medical Center in Chicago, have changed policies to include family and direct service providers.

Nancy Foster, vice president of quality and patient safety policy at the American Hospital Association, told NPR in a statement that "it is up to individual hospitals to set up their own protocols." In the pandemic, she says hospitals have followed guidance from the federal Centers for Disease Control and Prevention and from state and local governments "to implement even more stringent visitation restrictions because of the higher level of spread in their communities. When possible, hospitals have worked to accommodate companions in the room for those who could not speak for themselves, and when that was not permissible, other accommodations have been used, such as video or phone conferencing with family members or others."

The same issues are at the heart of the complaint filed in Connecticut on behalf of three individuals who had difficulty communicating and had been hospitalized. 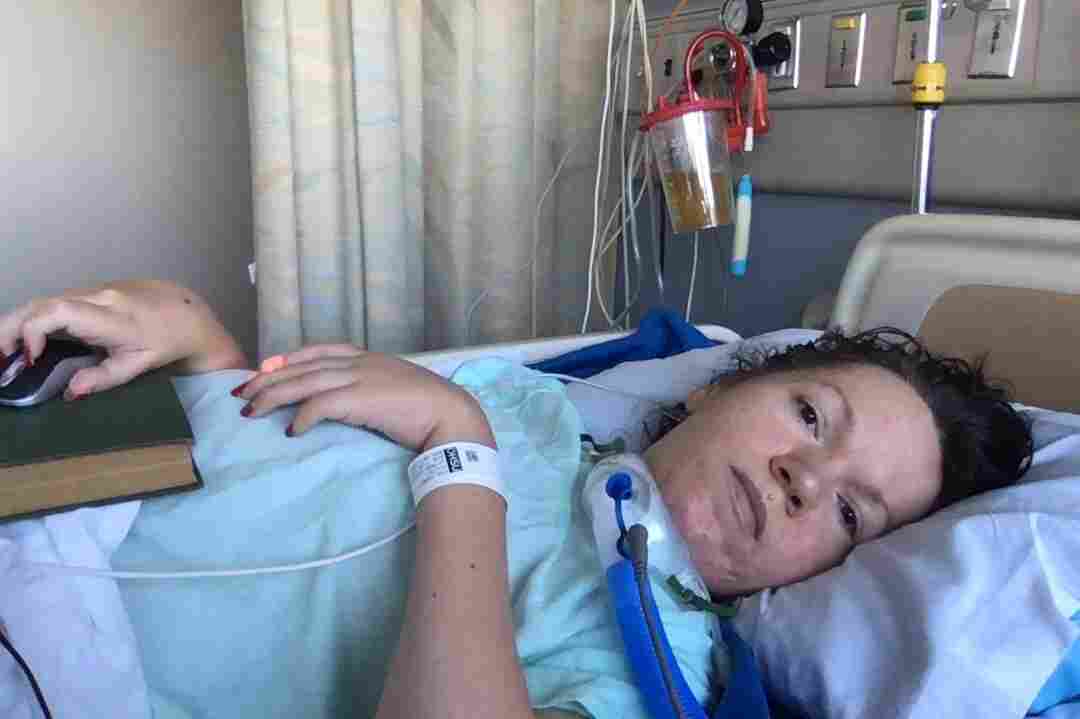 Christine Getman can move just two fingers and relies upon personal care attendants 24 hours a day. When she went to the hospital last month for a bout of meningitis, her attendant wasn't allowed in. She says it would have helped both her and the hospital staff if they'd been allowed. Christine Getman hide caption 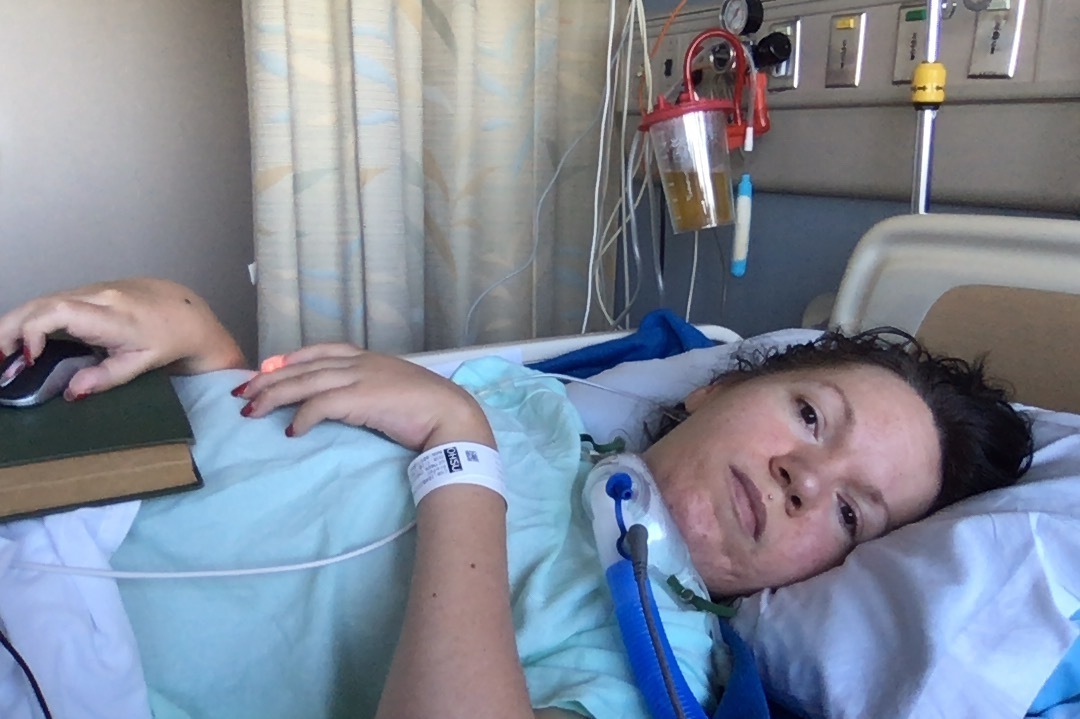 Christine Getman can move just two fingers and relies upon personal care attendants 24 hours a day. When she went to the hospital last month for a bout of meningitis, her attendant wasn't allowed in. She says it would have helped both her and the hospital staff if they'd been allowed.

One was a 73-year-old woman who went to a hospital with kidney problems and right away was diagnosed with COVID-19. Years before, she'd had a brain aneurysm and strokes. She lost her short-term memory. Now she gets confused and can't speak.

In the 11 years since her brain injury, her family had painstakingly learned how to communicate with her, reading her gestures and emotions and speaking back words to her. But alone in the hospital, the woman's condition started spiraling down.

"It's horrible. It's a living nightmare," her daughter told NPR. "And to know that your mom knows what's going on but can't communicate it and probably feels that we left her there is beyond devastating."

The last time the mother went to the hospital, last summer, her husband or one of her three daughters stayed with her around the clock.

"People don't typically try to communicate with her because she's nonverbal," the daughter says. " So they don't look at her and explain to her what's going on. Where we've always been able to say, 'Mommy, there's this test that's going to be very uncomfortable' and we've learned techniques to help her relax during certain tests because they are very painful and she's never had to be sedated or tied down."

Now she is tied down and sedated while on a ventilator in the ICU.

NPR agreed not to name the family because they've joined in the complaint without using their name.

There have been some nurses who have held up an iPad so the family can talk to their mother. But it's just not the same as being there, the daughter says, adding that there have been missed X-rays, missed tests and extra pain.

It's not just families of patients who have filed complaints.

In Oregon, Christine Getman gets round-the-clock assistance because she has a progressive neuromuscular disease and she can't move except for two fingers.

She uses a power wheelchair. On the back, there's a ventilator with a tube that goes to her throat to help her breathe and speak.

A personal care attendant helps her eat, get dressed, talk on the phone or just move her body so that she can avoid getting painful bedsores — 24 hours a day.

With that help, Getman gets around. And she runs a small nonprofit group.

When she went to the hospital last month for a bout of meningitis and ended up on a COVID-19 ward, her attendant wasn't allowed in.

Getman says it would have been better for her, and the hospital staff, if her attendant had been allowed to help.

"Anytime somebody entered my room to help me use the bathroom, eat or reposition, it was another round of changing gloves and masks, using sanitizers and gowns," she says. "And my care attendants would have stayed in my room. They wouldn't use up any additional PPE."

A coalition of disability groups this month filed another complaint over hospital practices in Oregon. It included a demand that people like Getman be allowed to bring an attendant with them to the hospital.