Accessibility links
1980 Eruption Of Mount St. Helens 'Seemed Apocalyptic' Howard Berkes covered the 1980 eruptions of Mount St. Helens for NPR and has returned to the volcano for multiple stories over the years. He recalls the massive blast and its aftermath.

I rushed to my radio station and its clacking Associated Press wire machine and pulled up a pile of wire copy from the floor. The reports coming in from southwest Washington state were hard to believe:

And it looked that way, too, the next morning when I got my first glimpse. A colleague and I talked our way past a police roadblock on the south side of the mountain, and after rounding a turn in the road, we hit the brakes and gasped.

A gray and black plume continued to shoot out of a new crater and miles into a darkened sky. There were eerie flashes of blue lightning in the plume and thick clouds of ash heading northeast. 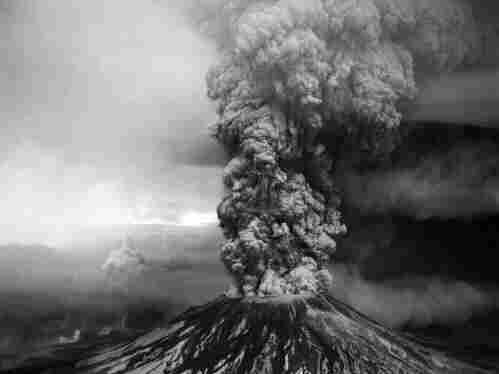 By then, heavy ashfall closed roads, schools and airports across eastern Washington. Even mail delivery stopped. The ash was blinding for drivers and dangerous if inhaled. It seized the engines of cars and caused a run on pantyhose, which was then wrapped around carburetors and air filters for protection.

None of that compared to what it was like up close and inside that volcanic maelstrom.

And it all began without warning. Despite two months of earthquakes, ashfall and a growing bulge on the north side of the mountain, the night before was quiet. That morning was tranquil. The cone-shaped mountain had a white mantle of snow.

"If there had been an emission [of ash] it would be black," reported Gerry Martin, a ham radio operator stationed on a ridge 8 miles from the summit. Martin was part of a network of volunteers monitoring the mountain for Washington's emergency management agency.

"Vancouver, Vancouver. This is it!"

U.S. Geological Survey geologist David Johnston was 2 miles closer. He had a car and camper and was calling in reports to the USGS command post in Vancouver, Wash. The day before, he persuaded visitors from the University of Washington to leave. They wanted to camp with him overnight. "It's too dangerous," he told them. 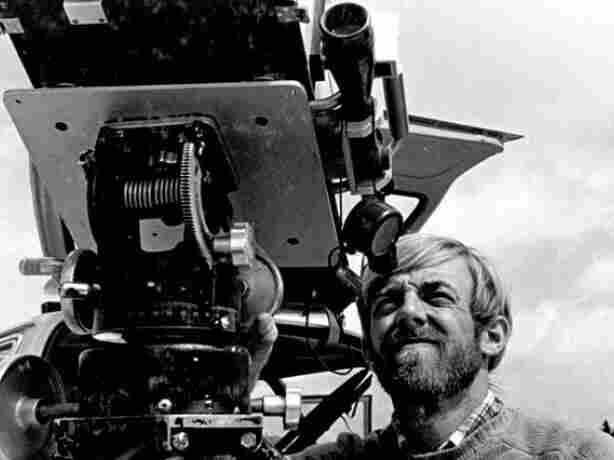 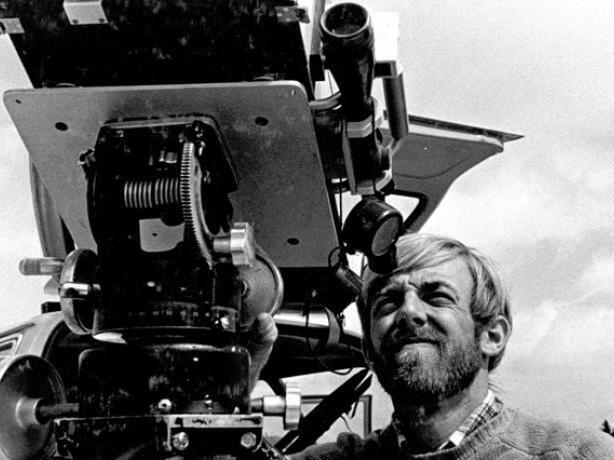 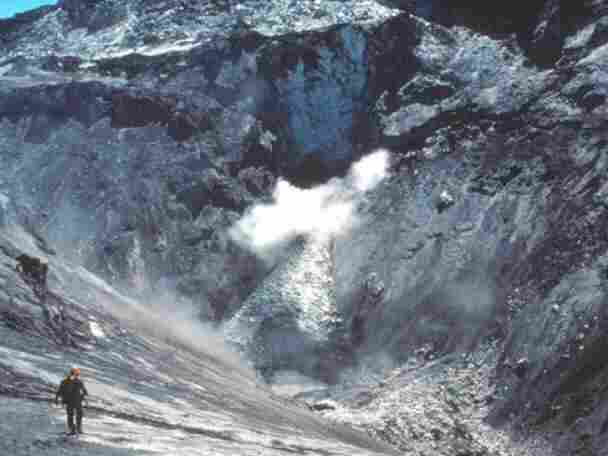 David Johnston enters a small crater at the summit of Mount St. Helens prior to the May 18, 1980, catastrophic collapse and eruption. USGS hide caption 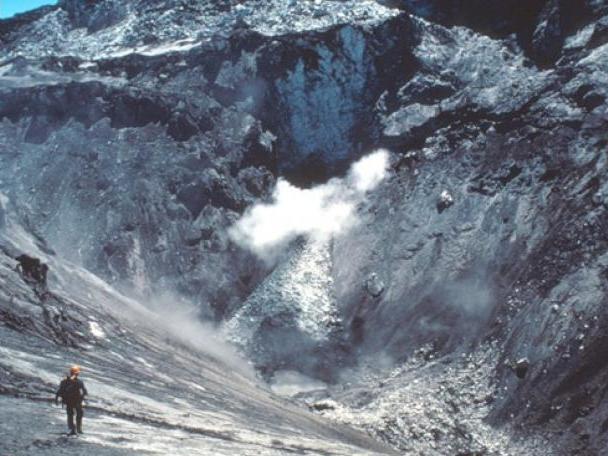 David Johnston enters a small crater at the summit of Mount St. Helens prior to the May 18, 1980, catastrophic collapse and eruption.

Also watching, and reporting via ham radio, were Ty and Marianna Kearney, who heard Gerry Martin's report at 8:32 a.m.

"Now we've got an eruption down here," Martin said through static, his voice calm at first, then growing more and more alarmed. "And now we've got a big slide coming down. The whole ... northwest side is sliding down. And it's coming over the ridge toward me."

Johnston shouted into his radio: "Vancouver, Vancouver. This is it!"

Martin was still reporting and had a clear view of Johnston.

"The camper and the car that's just south of me is covered. It's going to get me, too," he said.

The Kearneys saw that they would be next. 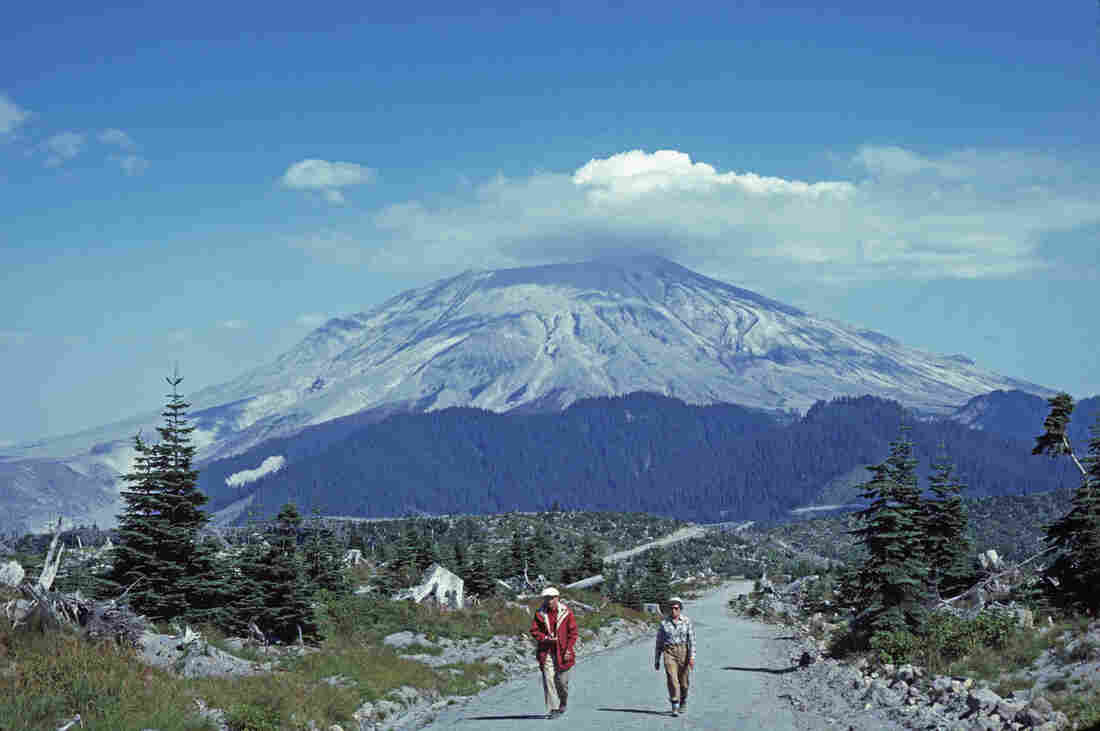 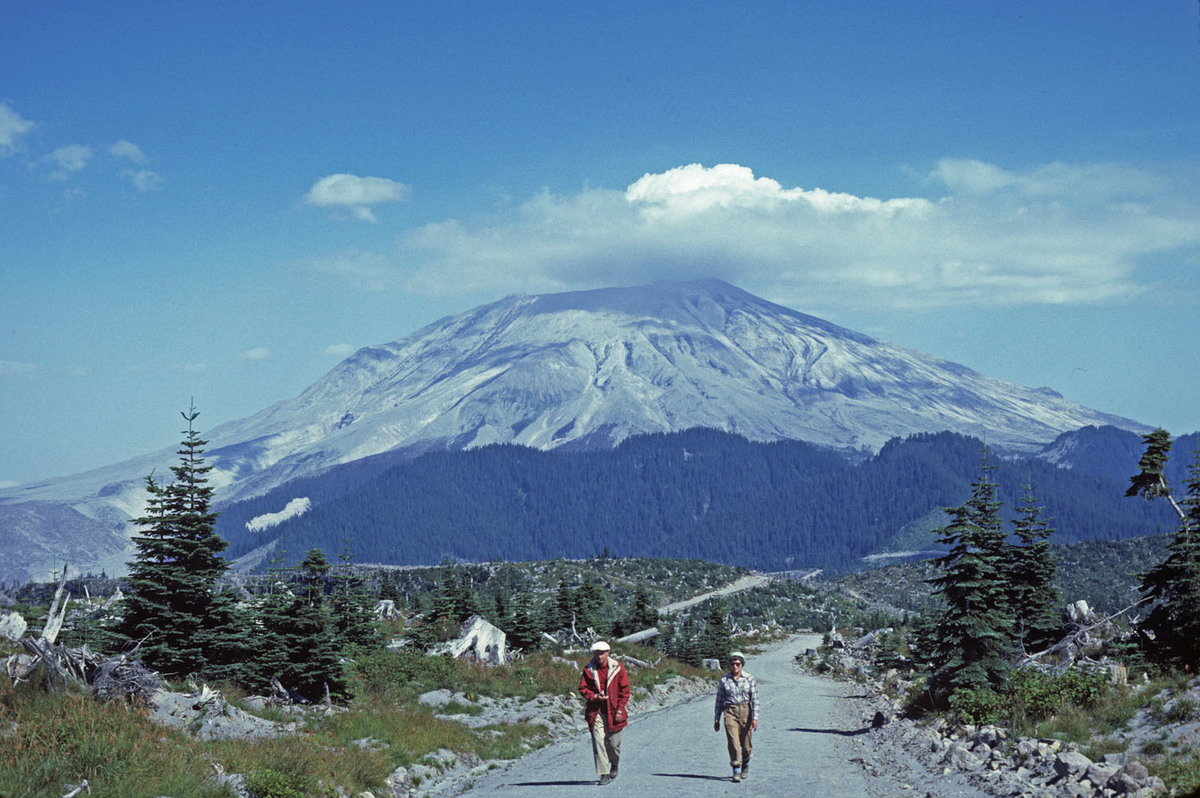 Ty and Marianna Kearney returned to their volcano observation post in August 1980.

He and Marianna bolted into their van and hit the gas. They had parked facing downhill and had cleared the dirt road of rocks in case they needed to flee.

"We looked out our van windows," Marianna told me nearly two decades later. "There was nothing but ash and clouds and all of these columns [of ash and smoke]. That was when I felt like, gosh, maybe we won't get out of here."

The Kearneys made it around the southwest side of the mountain, which was shielded from the blast.

"We feel very fortunate to survive and have a clear road," Ty recalled. "Other people, of course, had a really ... bad, rough time out of it."

A body filled with ash

Mike Moore was camped with his wife and two young daughters 13 miles from the mountain. When we spoke in 1999, he had a collection of photographs from that day in 1980. They were all colorless because gray and black ash continued to fall from the sky and covered everything in what was otherwise a verdant green forest.

"Our major color that we saw was our tent when we camped that night after trying about 18 hours to get out, and not being able to make it," Moore said.

The Moores spent that 18 hours trudging through deep ash and climbing up and over massive, fallen trees. There was blinding lightning at times, Moore said, and deafening thunder. They soaked some shirts and wrapped them around their mouths to avoid inhaling ash, which fell like heavy snow.

Still, Moore told me, "Our situation doesn't compare to what other people went through."

The Moores were rescued by searchers in a helicopter. But the falling and blowing ash in the blast zone covered 230 square miles, making it difficult to find everyone who was trapped.

"To me, the most pathetic story was of a gentleman that was in extremely good physical shape," Moore recalled, noting that the man had had the wisdom to wrap himself in a sleeping bag as he tried to hike out. 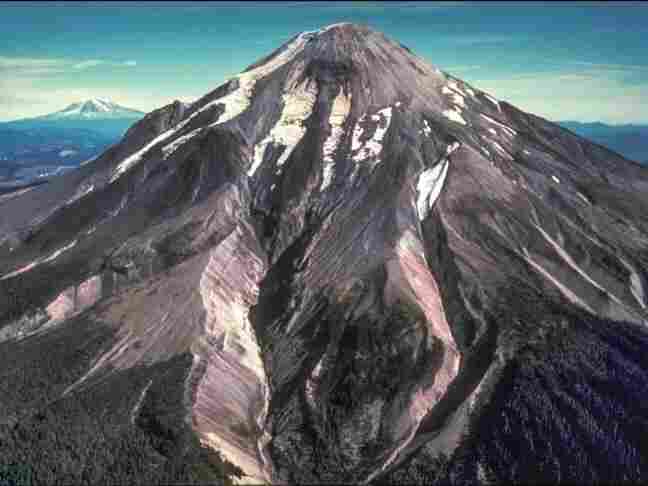 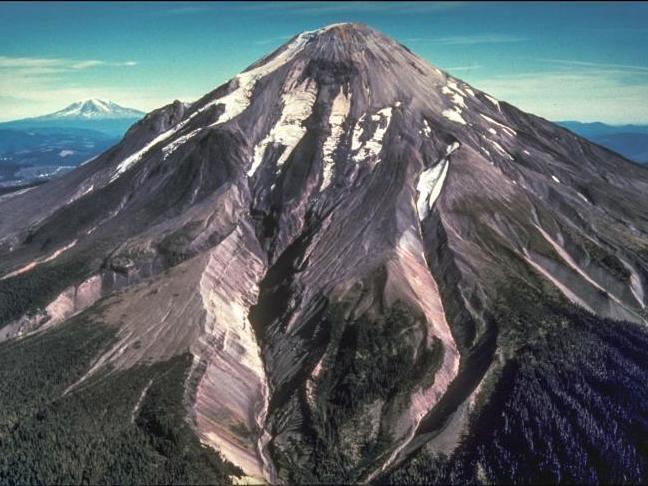 "He made it 14 miles before he finally collapsed and went to sleep. And the body was found with his lungs and his trachea and his mouth and his nose just filled with ash."

"It makes the moon look like a golf course"

A few days after the eruption, I climbed into a military helicopter with other reporters. We were part of a flying press corps following Marine One and President Jimmy Carter as he toured the blast zone. It was a struggle to describe what we saw. Rivers were still choked with logs, mud and debris. Pumice piled hundreds of feet deep still emitted clouds of steam. Everything was gray or white, and the trees in mile after mile of leveled forest all pointed in the same direction.

President Carter also struggled to describe it when we landed at a small airport.

"Somebody said it looked like a moonscape, but the moon looks like a golf course compared to what's up there," Carter said, standing on the tarmac in a windbreaker and mud boots.

"The ash is several hundred feet deep. There are tremendous clouds of steam coming up as enormous icebergs as big as a mobile home lie there melting. There's no way to describe it. It's an unbelievable sight."

The eruption's magnitude was also difficult to comprehend:

The death toll reached 57 and included ham radio operator Gerry Martin and USGS geologist David Johnston. All but three of those killed were outside the "red zone" established by Washington Gov. Dixy Lee Ray. Geologists had pushed for a larger area with mandatory evacuations. But pressure to shrink the danger zone was intense from cabin owners, campers and hikers, and logging companies, including Weyerhaeuser, the timber giant that owned private forests in the area.

Defining a danger zone was tricky because predicting volcanic behavior is elusive. In fact, the timing, magnitude and direction of the May 18 blast defied what geologists had believed based on past behavior of Mount St. Helens and other volcanoes.

The powerful lateral blast didn't fit their understanding of the mountain's past. The power of the blast surprised them. And despite two months of earthquakes, ashfall and a growing bulge on the north flank, the timing of the eruption was a surprise.

"There was no sign that it was going to happen at 8:32 in the morning of May 18," says Seth Moran, the scientist-in-charge at the Cascades Volcano Observatory in Vancouver, Wash. "There was no short-term indication. And there had been a lot of optimism that there would be signs" of a cataclysmic eruption. 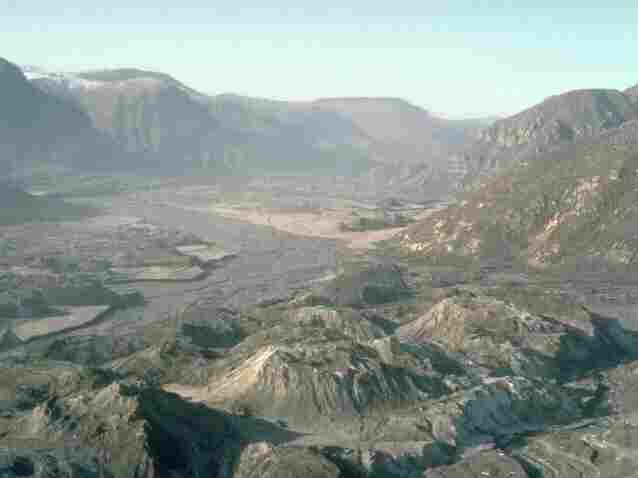 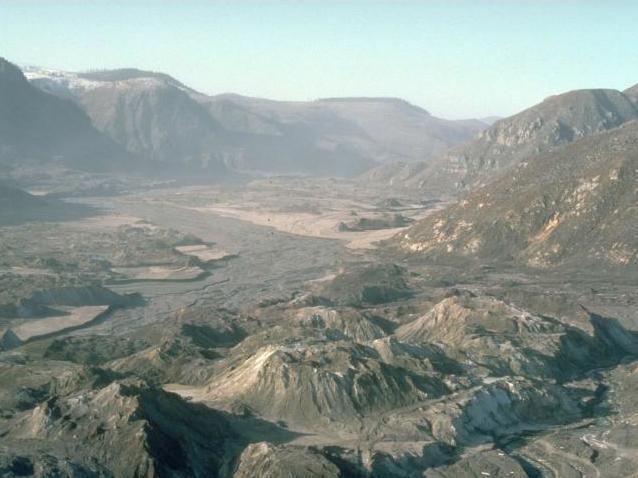 Geologists have since documented similar volcanic behavior at Mount St. Helens and elsewhere. The eruption gave them new information about what to look for in the deposits that eruptions leave behind.

But they still warn that massive eruptions can occur suddenly at Mount St. Helens and other Cascade Mountain volcanoes, including Mount Rainier in Washington and Mount Hood in Oregon. There may be little or no warning of big blasts or catastrophic mud and debris flows. So vulnerable communities have been identified and warned. And remote monitoring networks have been established.

"That's a lesson we certainly learned at Mount St. Helens," Moran says. "It's influencing the putting out [of] instruments on other volcanoes that in some cases haven't erupted in thousands of years. But there's the potential for them to do so if that volcano wakes up."

"Nobody can stop it"

Mount St. Helens and other Cascade volcanoes are expected to wake up eventually. In fact, alerts were high from 2004 to 2008, when earthquakes and ash emissions hit Mount St. Helens again. But eruptions turned out to be relatively minor.

Ty Kearney was philosophical when we spoke in 1999 about the watching and waiting for the next eruption.

"It's something that doesn't happen very often in the lifetime of a human being," Kearney said. "And it's nature. Nobody can stop it."

Howard Berkes covered the 1980 eruptions of Mount St. Helens for NPR and has returned to the volcano for multiple stories over the years. He retired in 2019 after 38 years as an NPR correspondent.