Accessibility links
5 Things To Watch This Week In Politics And Coronavirus President Trump has alleged criminal activity by the Obama administration, while former President Barack Obama said Saturday that some "so-called grownups" are falling down on the job.

Trump Wants A Fight With Obama. Here's Why He Might 'Be Careful' What He Wishes For

Trump Wants A Fight With Obama. Here's Why He Might 'Be Careful' What He Wishes For 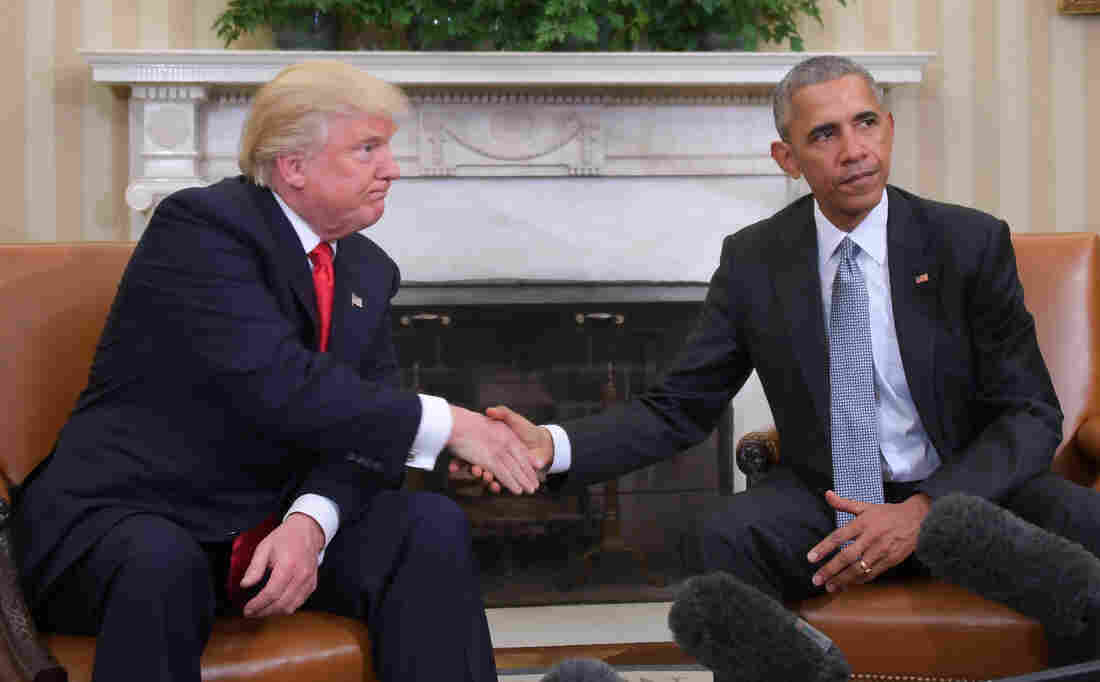 Then-President Obama and then-President-elect Donald Trump shake hands during a transition planning meeting in the Oval Office at the White House in November of 2016. Jim Watson/AFP via Getty Images hide caption 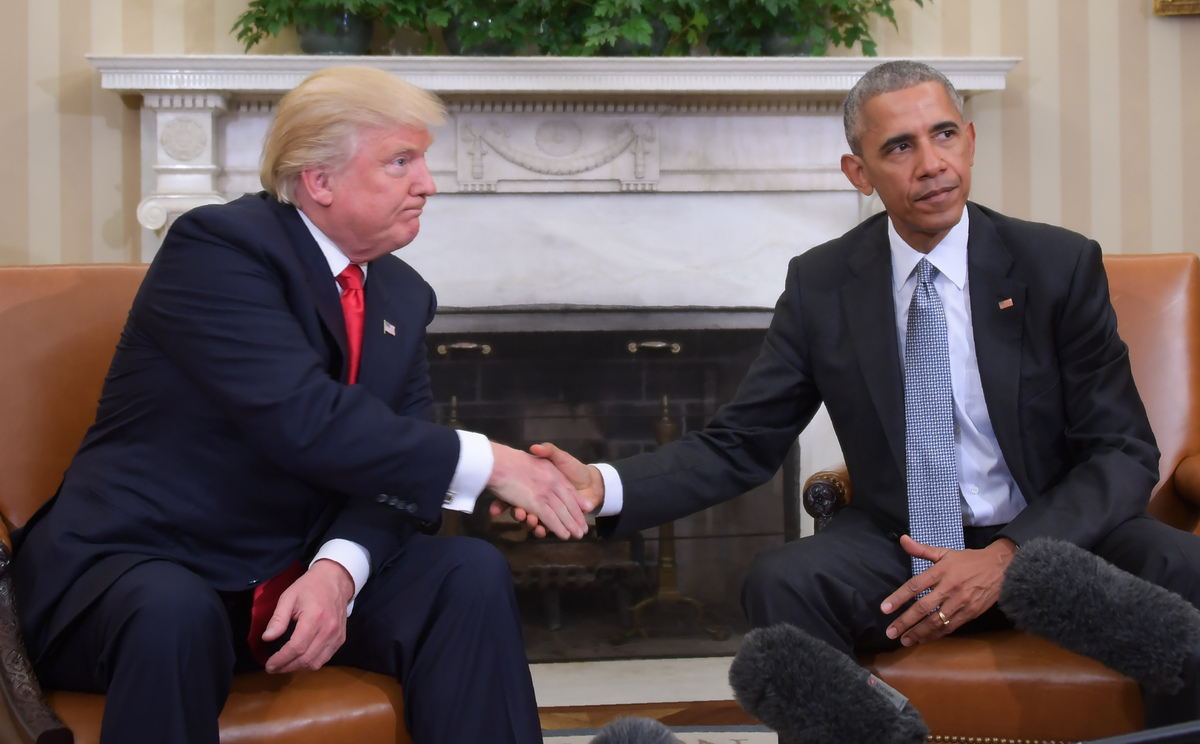 Then-President Obama and then-President-elect Donald Trump shake hands during a transition planning meeting in the Oval Office at the White House in November of 2016.

With Joe Biden on the ballot, so is the legacy of Barack Obama, and it appears we're about to see a throwdown between the last president and the current one — and their polar opposite worldviews.

Amid criticism of his handling of the coronavirus pandemic, President Trump has been falsely laying blame on Obama for leaving the "cupboard bare" when it comes to the national stockpile of emergency medical supplies and equipment.

And lately, Trump and conservatives have been running with allegations of potentially criminal activity by Obama administration officials for their handling of surveillance that later led to the investigation and guilty plea of Michael Flynn, Trump's three-week national security adviser. (The Department of Justice now wants to drop its case against Flynn.)

In the past week, Trump has tweeted "Obamagate" (on its own, as a retweet or as a hashtag) 18 times. Three times, he's tweeted simply "Obamagate!" with nothing else.

Neither Trump nor White House officials have been able to identify a specific crime, but it sure helps fire up the base.

Obama, for his part, seemed to reply with one word of his own Thursday: "Vote."

And then, on Saturday, he had more words during two virtual commencement addresses.

"[T]his pandemic has fully, finally torn back the curtain on the idea that so many folks in charge know what they're doing," Obama told graduates of historically black colleges and universities. "A lot of them aren't even pretending to be in charge."

Then, when speaking to graduating high school students, he said: "Do what you think is right. Doing what feels good, what's convenient, what's easy — that's how little kids think. Unfortunately, a lot of so-called grownups, including some with fancy titles and important jobs, still think that way — which is why things are so screwed up."

And a week earlier, when talking to former officials from his administration, leaked audio revealed that Obama called Trump's handling of the coronavirus an "absolute chaotic disaster" and an example of what happens when a "what's in it for me" mindset "is operationalized in our government."

Pressed about Obama's remarks Sunday, Trump said he hadn't heard them, but noted, "Look, he was an incompetent president, that's all I can say, grossly incompetent."

Welcome to the 2020 presidential campaign. Reelections are always a referendum on the sitting president. But with Biden, Obama's vice president, at the top of the Democratic ticket, it's somewhat of a referendum on Obama, too.

And there's reason for Trump to want — or even need — to try and take Obama down a few pegs. Currently, Obama is among the most popular politicians in the country — and one of the highest-polling political figures (besides his wife, Michelle.)

It's a clear and stark choice offered up to voters — and one Trump seems to want front and center. He even tweeted at Republican Senate Judiciary Chair Lindsey Graham, who says he wants to hold hearings on the Flynn case, to call Obama to testify.

"Do it @LindseyGrahamSC, just do it," Trump tweeted. "No more Mr. Nice Guy."

If I were a Senator or Congressman, the first person I would call to testify about the biggest political crime and scandal in the history of the USA, by FAR, is former President Obama. He knew EVERYTHING. Do it @LindseyGrahamSC, just do it. No more Mr. Nice Guy. No more talk!

Graham responded, telling reporters he thinks that would "be a bad precedent" to compel a former president to testify and would "open up a can of worms."

1. Coronavirus death toll approaches 90,000: About 90,000 people are now confirmed to have died from COVID-19 in the United States, and though new cases are slowing, the country is still on pace for 100,000 deaths from the coronavirus before the end of the month.

That slowing of new cases is good news, but with two-thirds of states significantly relaxing stay-at-home restrictions, experts are concerned about a potential resurgence.

"We're seeing a decline; undoubtedly, that is something good to see," Jeffrey Shaman, an epidemiologist at Columbia University, told The New York Times. "But what we are also seeing is a lot of places right on the edge of controlling the disease."

Another good sign, though: New York Gov. Andrew Cuomo tweeted on Sunday that his state now has "more testing capacity than New Yorkers are using." And he wants not only symptomatic New Yorkers to get tested, but also those who "have been in contact with someone with COVID." That's a first step in what experts say is one of the most important things to do to try and contain the virus — test as many people, including those without symptoms, as often as possible. 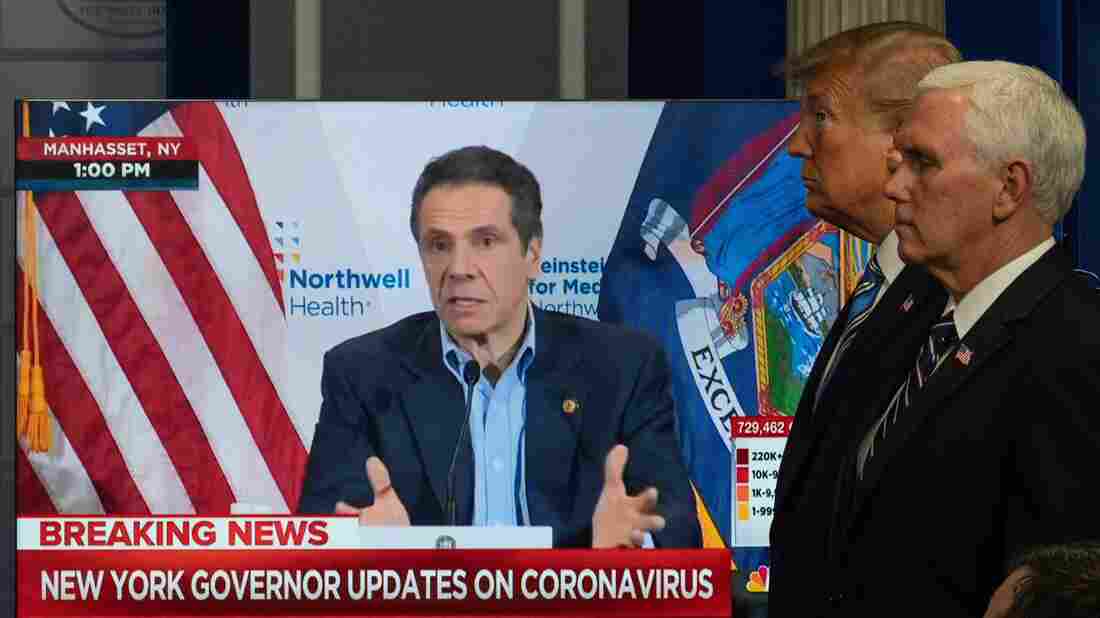 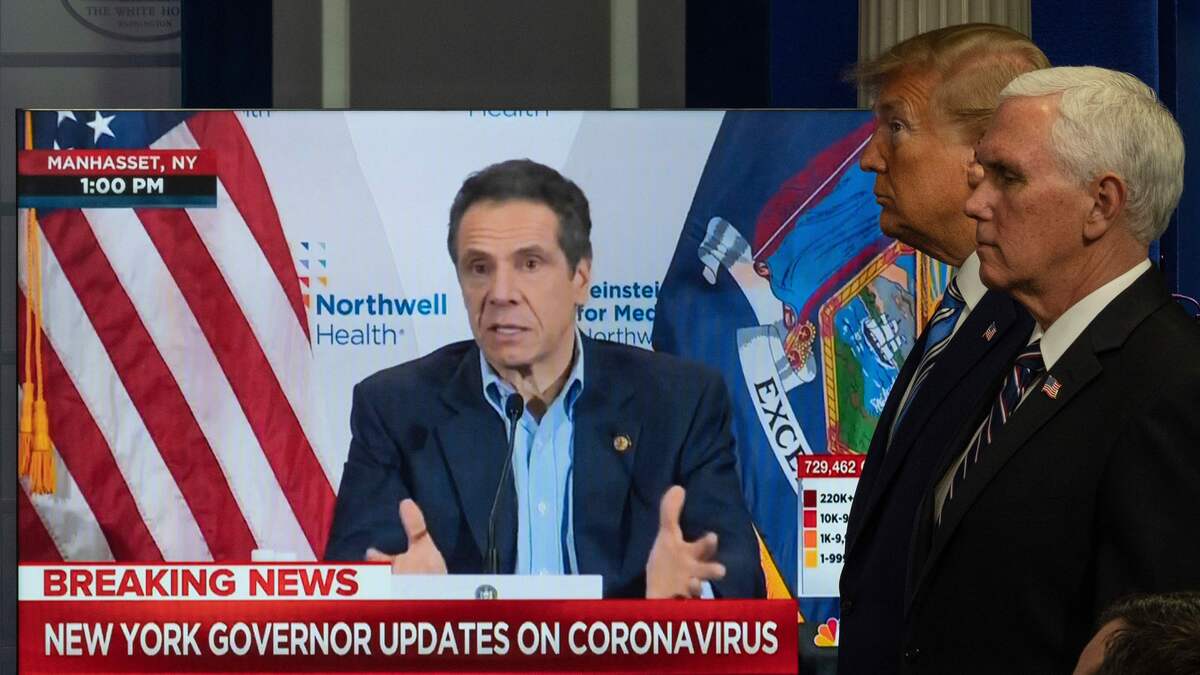 2. Will the Senate make a push for another relief package? Health versus the economy has been the tension since the beginning of the lockdowns. Unemployment has hit almost 15%, the highest since the Great Depression. And as deaths spiked in April, 20 million jobs were lost. Congress has passed four relief packages; the Democratic-led House has passed another, but Senate Republicans — and the White House — have balked at a fifth major package. "We have not yet felt the urgency of acting immediately," Senate Majority Leader Mitch McConnell, R-Ky., said last week.

On Tuesday, there could be more clarity on the state of the economy and what more the administration is planning to do to support people and the economy in the coming weeks when Treasury Secretary Steven Mnuchin and Federal Reserve Chair Jerome Powell appear before the Senate Banking Committee, as required by the CARES Act.

3. Watching for fallout from inspectors general firings: The firing of the State Department's inspector general, Steve Linick — announced on a Friday night, which is where bad news goes to be buried in Washington — is raising more questions than answers. Linick is the fourth inspector general the Trump administration has sought to remove in the past six weeks. A Democratic congressional aide told NPR's Michele Kelemen that Linick was looking into Secretary of State Mike Pompeo's conduct.

The move triggered Republican Sens. Mitt Romney, Susan Collins and Chuck Grassley to question Trump's motives. Romney said the move "chills" the IGs' essential independence and called the moves "a threat to accountable democracy." Collins said Trump had not provided "the kind of justification for the removal ... required" by law. Grassley pointed out that "written reasons" are "required" and that "A general lack of confidence simply is not sufficient." But what does the Republican Senate do to maintain the accountability that they say Trump is threatening or not abiding by? So far, during the Trump presidency, it's done little to hold him in check.

4. Senate Republicans move ahead with Hunter Biden probe: On Wednesday, the Senate Homeland Security Committee will vote on a subpoena to Blue Star Strategies. That's a company that worked with the Ukrainian energy company Burisma, which hired Biden's son Hunter to sit on its board. Republican senators are looking into whether Blue Star "sought to leverage Hunter Biden's membership on the board of directors for Burisma." Call it the impeachment backlash.

With Romney signaling he will vote in favor of the subpoena, it is expected to pass, NPR's Philip Ewing and Claudia Grisales report.

5. Supreme Court opinions Monday: The Supreme Court is expected to issue opinions Monday. We are keeping an eye out for an LGBTQ employment discrimination case, as well as whether the court thinks the Trump administration acted lawfully in shutting down the Deferred Action for Childhood Arrivals, or DACA, program. When the DACA case was argued last fall, the court's conservative majority appeared it would go along with the Trump administration. Both of these decisions could be released at any time in the next few weeks.

On the (virtual) campaign trail

"After much reflection, I've concluded that circumstances don't lend themselves to my success as a candidate for president this year, and therefore I will not be a candidate."

— Rep. Justin Amash of Michigan announcing via Twitter the end of his short-lived Libertarian bid for the presidency. There was much Democratic hand-wringing that Amash could cost Biden votes, especially in Michigan.