Accessibility links
Scared To Return To Work, Or Can't With Kids At Home? What You Need To Know As businesses reopen, many workers are worried for their health and would rather stay on unemployment. Many parents can't return to a workplace because they have no child care. What are your options? 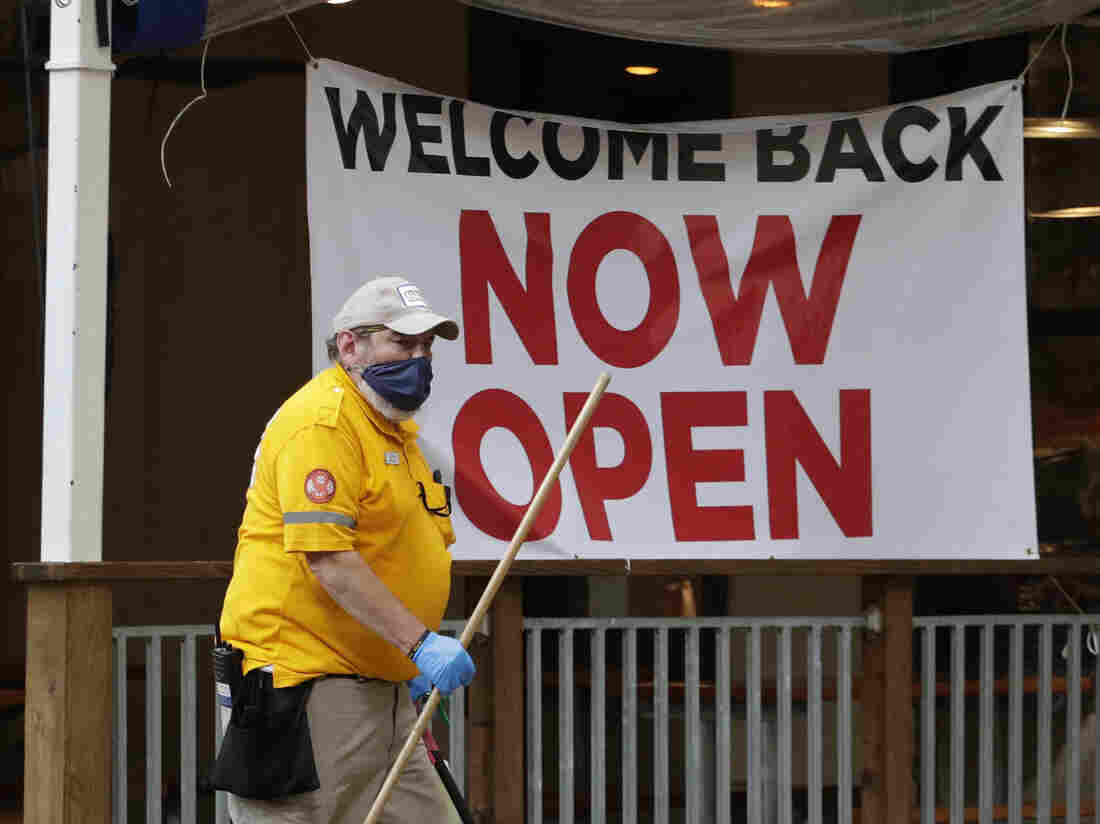 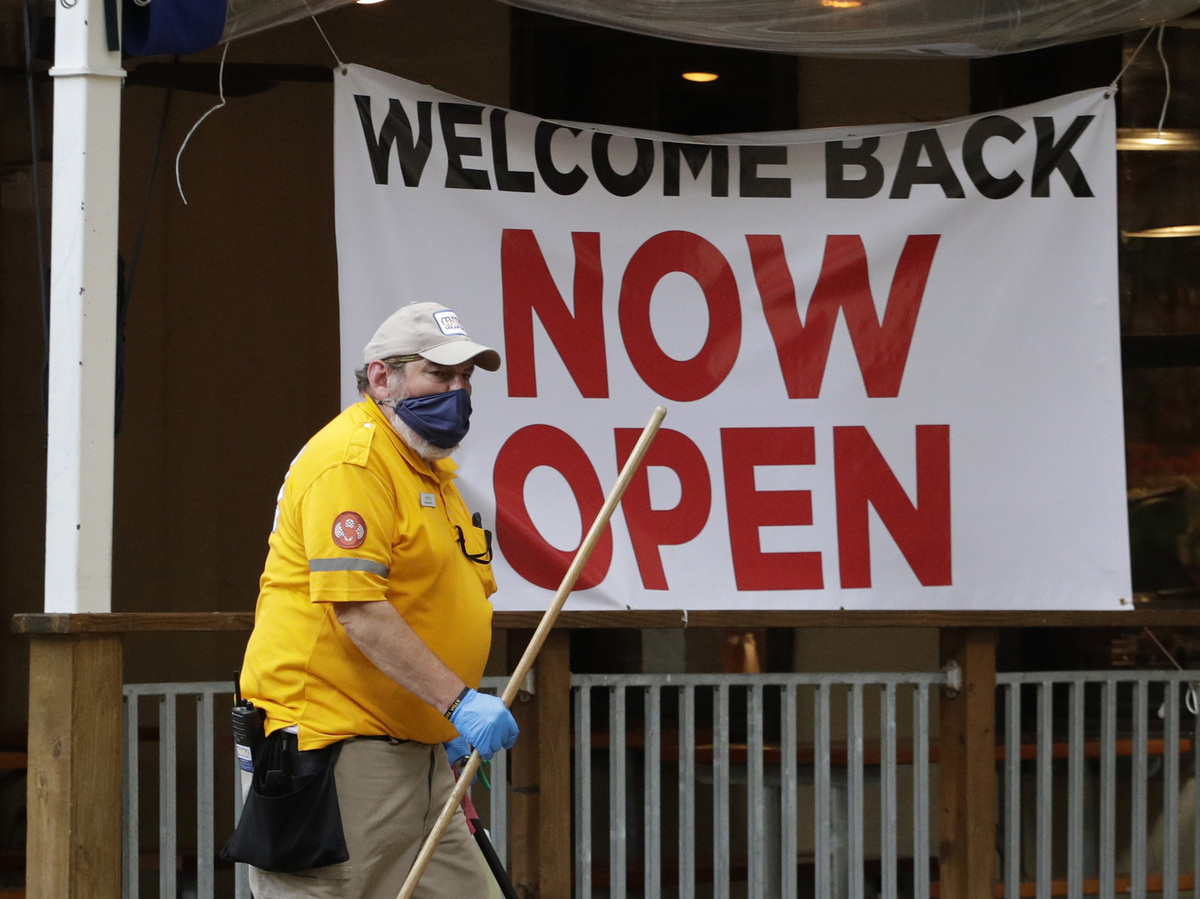 A worker passes a sign at a restaurant along San Antonio's River Walk that has reopened. As businesses reopen around the U.S., many workers are worried for their health.

As businesses reopen, many Americans being called back to work say they don't feel safe — especially those who work in restaurants, hair salons or other high-contact jobs.

"With people eating food, not having masks on, with servers having to touch their plates and their silverware, there's just absolutely no way to keep the servers safe," says Lindsey, a waitress in Iowa.

She has been out of work for two months. But this week, the pub-style restaurant she works at is reopening.

She says her restaurant is setting up rules for increased hand-washing and disinfecting and is spacing tables 6 feet apart. But even with that, she thinks it's too soon to reopen.

"I believe that restaurants are one of the most unsafe places," Lindsey says. "If we can do delivery and takeout, that's totally fine." But she says serving people dinner isn't an essential task right now and it feels too risky.

Still, if your employer offers you your job back and you refuse it, generally speaking, you're not supposed to be able to keep collecting unemployment benefits.

But there are strategies and special protections that workers should know about — in particular people with health conditions and parents whose children's school, day care or summer camp is shut down.

1. Talk to your employer.

Andrew Stettner, a worker-protection expert at the Century Foundation, a progressive think tank, says people in Lindsey's situation should start by talking to their employer.

He says you might say you want to wait, talk to co-workers and hear how the safety measures are going as things get rolling again. He says your employer might not be able to hire everybody back right away anyway and so might agree not to call you back to work yet. "And as long as they say that's OK," Stettner says, "your unemployment benefits won't stop."

That's something any worker can try.

2. There are special rules if you have an underlying health condition.

"My big concern is that most workers don't understand their rights," says Michele Evermore of the nonprofit National Employment Law Project.

She says if you have, say, diabetes, heart disease or an immune deficiency and your doctor advises against going to work during the pandemic, Congress voted to let people in that situation collect unemployment.

Short on Cash? Here's Some Advice For Families Stretching Their Budgets

"If you have an underlying condition," Evermore says, "first contact your employer and explain why you can't return to work." She says to then explain the situation to your state's unemployment office. And, she says, "you should be eligible to remain on unemployment assistance."

Evermore says the decision is made by the state unemployment office. A letter from a doctor should help, she says.

3. If you can't get child care, you should be able to stay on unemployment.

Many parents are stuck right now if they have a job that can't be done remotely from home. They can't return to their place of work because with schools, day cares and summer camps closed, they have no one to watch their kids. Congress approved help for them, too.

Chai Feldblum, a Washington, D.C., lawyer who advises businesses as they reopen, tells many employers to consider letting parents in this situation not return to work.

"If someone is unable to work because of child care needs, because a school, a place of care has closed," Feldblum says, "then that person is eligible for unemployment."

Feldblum says that in addition to unemployment benefits, some parents may be eligible for 12 weeks of paid leave mandated by Congress, though that will depend in part on the size of the business. Businesses that must provide this leave can then hold on to tax money they would otherwise have sent to the IRS and use it to cover the cost of paid leave for parents, she says.

4. But just being afraid is not enough to stay on unemployment.

Getting back to the safety issue, Feldblum says just feeling unsafe is not enough to stay on unemployment. "No. If you're just scared about going to work, you have to go to work in order to get paid," she says.

5. What if your workplace seems particularly unsafe?

Stettner and Evermore say if your workplace is not taking basic safety precautions that similar businesses in the area are and you can document that, you might qualify to refuse to go back to that job and stay on unemployment. The argument you'd be making is that the workplace is not meeting the prevailing conditions of work in the area.

For example, Stettner says, if there are "five grocery stores in town and four are providing their employees with masks and gloves and are sanitizing properly, but you work for the fifth and they're just not doing that, you can say, 'No, look, this is not meeting the prevailing conditions of work.' "

But, Stettner says, that puts the worker in a difficult position: having to point a finger at the employer and argue this issue with the state unemployment office.

Meanwhile, Evermore, of the National Employment Law Project, would like to see clear and enforceable mandatory safety rules coming from the federal government — including the Centers for Disease Control and Prevention and the Occupational Safety and Health Administration. But so far under the Trump administration, she says that's not happening.

"That's the whole problem," Evermore says. Without those kinds of bright mandatory lines being drawn at the federal level, "it's going to be the states that are opening up too quickly that are also going to be deciding what suitable work is." She says hundreds of groups, including hers, are asking for better federal guidance on worker safety.