Accessibility links
A Reporter's Complicated Relationship With Edward Snowden Lies At The Center Of 'Dark Mirror' Edward Snowden handpicked Barton Gellman as one of three journalists he would work with to reveal government secrets. Gellman's book is an in-depth look at where he agreed and disagreed with Snowden. 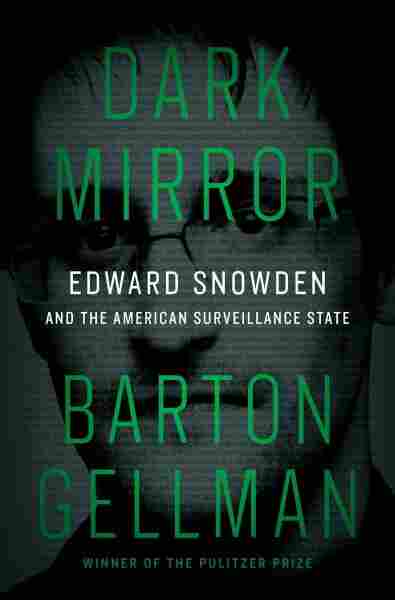 Edward Snowden's story on disclosing some of the National Security Agency's most sensitive surveillance programs has by now been oft told, by Snowden himself, among others.

Yet Barton Gellman's new book, Dark Mirror: Edward Snowden And The American Surveillance State, makes a major contribution largely absent in the earlier efforts. Gellman offers the most detailed, comprehensive and balanced take on the impact of Snowden's 2013 revelations and what they mean today, as the debate on national security versus individual privacy keeps evolving.

Snowden handpicked Gellman as one of three journalists to tell his story originally. Seven years after they first made contact, Gellman remains sympathetic to Snowden's crusade to expose surveillance programs previously unknown to the American public. But throughout, Gellman offers a much broader perspective, rather than just one-sided advocacy.

"I think Snowden did substantially more good than harm, even though I am prepared to accept (as he does not) that his disclosures must have exacted a price in lost intelligence," Gellman writes.

When Snowden reached out, Gellman turned to the Washington Post, the newspaper where he had worked for two decades but had left three years earlier. Gellman had to explain the story — and the likely fight it would provoke with the U.S. government — in a meeting with Executive Editor Marty Baron, whom he had never met.

Gellman said he couldn't reveal his source or the full scope of the story. But he would need the paper to provide him with "a windowless room with a high-security lock, reinforced door and heavy safe bolted to the floor."

Electronic credentials to enter the room would be limited to a precious few. "No one but me would have all of them," Gellman writes.

"Oh God. Did I just tell Baron I would lock him out of his own workspace?

Anything else? Baron asked, his expression opaque."

There was more, lots more, along the way, though it ultimately included a Pulitzer Prize for Gellman and the Post.

Gellman, 59, tells Snowden's story from a unique vantage point. He had direct access to Snowden and the secret documents. And as a reporter who spent most of his career covering national security, Gellman was also in contact with the top U.S. intelligence officials, past and present.

Gellman first visited Snowden in Moscow several months after the latter fled his position as an NSA contractor in Hawaii. Snowden insists he was just transiting through Russia, but has been stuck there to this day because the Obama administration revoked his passport. Over the years, Gellman and Snowden have often debated and disagreed, in person and online.

"I don't think you go far enough ideologically," Snowden told Gellman at one point. "You're not willing to indict [the national security community], because mainstream American media, they don't do that. They don't indict people. They don't denounce people for doing things that are clearly wrong."

Gellman offers a very human portrayal of Snowden: a loner, filled with zeal and a black-and-white worldview. He also describes Snowden as precise and accurate most of the time, though sometimes prone to self-aggrandizement and exaggeration.

One of Snowden's most tantalizing claims is that he hacked into accounts of Supreme Court justices and senior leaders of Congress. But when Gellman pressed him, it turned out Snowden had merely tapped into a public email belonging to Nancy Pelosi, then the House minority leader.

"I hate to disappoint you on that because I know it was a major claim," Snowden replied.

In contrast to Gellman's portrait, Snowden was cast in a far more heroic light by the others he collaborated with, author Glenn Greenwald and filmmaker Laura Poitras.

Gellman, meanwhile, heard an earful from the national security establishment, where many did — and still do — see him as Snowden's accomplice.

Yet all this back-and-forth, between Gellman and Snowden, and Gellman and national security officials, is the best part of a compelling book.

As the Post prepared to publish, the U.S. intelligence community presented Gellman with a slide show revealing information gleaned about planned attacks against Americans. Gellman concedes:

"I am not — in this context — a global citizen, indifferent to the outcomes of national conflict. Disclosure of the details I allude to here would have caused self-evident harm to my country and some of its allies. ... These would have been valid intelligence targets by any legal standard."

One of those making the case was William McRaven, the now retired Navy admiral who oversaw the raid that killed al-Qaida leader Osama bin Laden in 2011.

"McRaven believed in transparency inside the walled precincts of the FISA Court and the House and Senate intelligence committee," Gelllman writes. "The public had no need to know or contribute outside views on policy or law. Classified transparency, in other words. McRaven saw no contradiction in that."

"Because of that secrecy, even the best-informed journalists and policy analysts had no information on the way PRISM [mass data collection] worked," Gellman writes. "Congress faced no public pressure, and big internet companies encountered little demand for stronger defense of privacy. Voters and consumers could not ask for change because they did not know the truth."

In addition, Gellman adds, some of those who said he should trust the national security establishment a few years ago have now become outspoken critics of President Trump, saying he's unfit as a commander-in-chief and has politicized the intelligence community.

In some ways, the world has moved on from the specifics raised by Snowden.

Congress passed the U.S.A. Freedom Act in 2015, which prohibits the bulk collection of the phone records of American citizens, addressing one of Snowden's major complaints. Now the government needs a court warrant to look at individual phone records.

In his own book released last fall, Snowden said that most Internet traffic is now encrypted, making surveillance more difficult.

"The good news is that the government is not in the business of random snooping and will probably never look at your small corner of that great big [data] map," Gellman writes. "But it could."

Case in point: Congress is now debating whether to extend part of the Patriot Act that allows the government to look at someone's web browsing and Internet search history without a warrant.