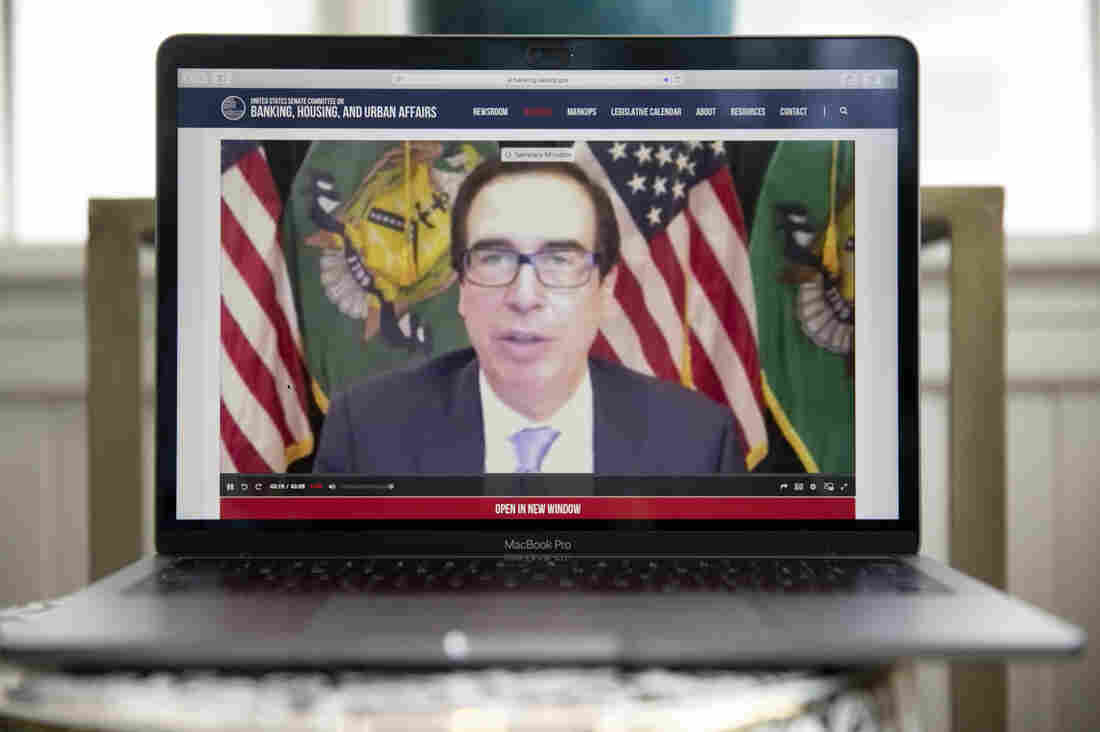 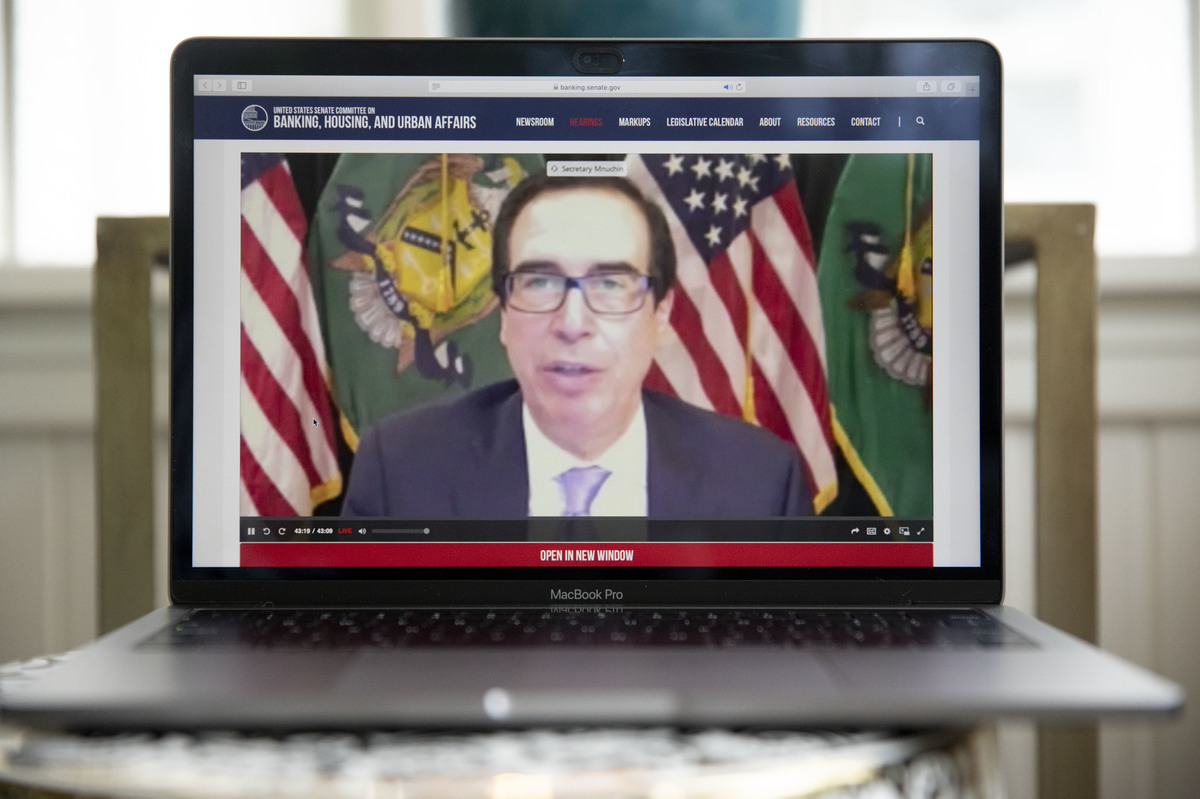 Treasury Secretary Steven Mnuchin speaks during a virtual hearing of the Senate Banking Committee on Tuesday. Mnuchin and Federal Reserve Chair Jerome Powell spoke about the rescue package passed by the Congress in March.

The Senate Banking Committee took its first look at spending under the massive CARES Act, which Congress approved in March to provide assistance to individuals, businesses and local governments affected by the coronavirus pandemic.

Federal Reserve Chair Jerome Powell and Treasury Secretary Steven Mnuchin were pressed by senators about their stewardship of specific aspects of the approximately $2 trillion relief package at Tuesday's remote hearing.

Senators Clash Over How Soon To Reopen The Economy

Sen. Elizabeth Warren, D-Mass., criticized both the treasury secretary and the Fed for not including stronger requirements that businesses borrowing from the central bank keep workers on the payroll.

"We're in a situation where 35 million Americans have filed for unemployment," Warren said. "You're in charge of half a trillion dollars. You're boosting your Wall Street buddies, and you are leaving Americans behind."

Mnuchin disputed Warren's characterization and said the conditions attached to the Fed programs had been negotiated with Congress.

Powell reiterated his view that Congress may have to authorize additional spending to prevent long-term damage to the economy. "What Congress has done to date has been remarkably timely and forceful," Powell said.

"I do think we need to take a step back and ask, over time, 'Is it enough?' And we need to be prepared to act further. And I would say we are if the need is there," Powell added.

Mnuchin, however, has been less open to new spending, saying federal lawmakers should wait to assess the effects of the four measures already approved by Congress before appropriating more funds.

The hearing came a day after a four-member panel appointed by Congress reported that none of the $46 billion allocated in the CARES Act for loans and loan guarantees for the airline industry has been spent and that relatively little of the $454 billion in program for loans to businesses and state and local governments has been disbursed by the Federal Reserve Board.

In his prepared testimony, Mnuchin appeared to dispute the oversight panel's findings. He says Treasury has "committed up to $195 billion in credit support under the CARES Act. We have the remaining $259 billion to create or expand programs as needed, as we continue to monitor a variety of economic sectors closely." He also says $25 billion in payroll support has been provided to the airline industry.

Powell said the Fed's Main Street lending facility for midsize businesses, municipal lending and other programs should be up and running by the end of May.

Democrats on the panel sent Powell and Mnuchin a letter Monday asking that they "further expand loan eligibility requirements, including quickly adopting a viable option for non-profits who are facing acute challenges as a result of the virus," and provide greater flexibility on the loan terms.

Sen. Mark Warner, D-Va., wrote that "all taxpayers will be better off to the extent more businesses can access affordable financing, keeping doors open, workers on payroll, and avoiding costly bankruptcies, through the remainder of the public health shutdown."

In his prepared testimony, Powell told the panel that the Fed has made changes, including reducing the minimum amount and raising the maximum amount of loans that business can ask for, changes that he says "should help the program meet the needs of a wider range of employers that may need bridge financing to support their operations and the economic recovery. We will continue to adjust facilities as we learn more," he said.

Mnuchin responded to criticism that the Treasury Department has been too timid. "We are fully prepared to take losses," he said of the seed capital that the department is providing to support lending by the Fed.