Accessibility links
'The Hunger Games' Prequel 'The Ballad Of Songbirds And Snakes' Is Lackluster While Suzanne Collins leaves readers uncertain of the answer to the question she poses in The Hunger Games — how much of character is innate, how much formed — it becomes painfully obvious here. 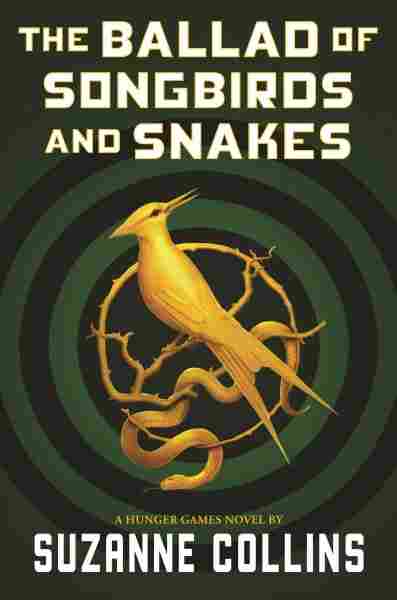 The Ballad of Songbirds and Snakes

Title
The Ballad of Songbirds and Snakes
Author
Suzanne Collins

With her Hunger Games novels, Suzanne Collins harnessed a combination of twisty plots, teen romance, dystopian worldbuilding and subtle intimations of cannibalism to sell more than 100 million books around the world.

The premise was unbeatable: Authoritarian regime forces children to fight to the death on live TV; rebellion ensues. But much of the series' appeal came from the spiky charisma of protagonist Katniss Everdeen, the sharpshooting teenager who wins the games and starts a revolution while choosing between two boys who are as alike in cuteness as they are different in Weltanschauung.

The series has a distinct Roman imperial vibe — far-flung districts sending their harvests to the glorious and corrupted Capitol, feasts complete with vomitoria, gladiatorial contests to the death (but for kids!). The country is called Panem, after the Latin phrase "panem et circenses," or bread and circuses — what the Roman satirist Juvenal identified as the formula for quieting a restive population. (In 1984, George Orwell calls this substance "prolefeed.") The hunger games, of course, are the circenses, the Capitol's way of controlling the proles through the twin mechanisms of entertainment and terror.

Collins' new novel, The Ballad of Songbirds and Snakes, is a baggy, meandering prequel to the events of The Hunger Games that tells the story of Katniss' nemesis and Panem's authoritarian ruler, Coriolanus Snow. With his Roman tyrant's name, surgically altered face and breath smelling of blood and roses, Coriolanus appeared as a distant villain throughout most of The Hunger Games series. It's only the last installment that gives him a touch of mystery — in its final pages, sentenced to public execution, he instead dies laughing, choked on his own blood.

So, how did he get there? Why was he laughing? What's with the blood? The Ballad of Songbirds and Snakes opens on teenage Coriolanus at home, making a cabbage soup that fills "the kitchen with the smell of poverty." Once prosperous, the Snows have fallen on hard times. Coriolanus has been chosen to mentor one of the tributes for the hunger games, a charming waif named Lucy Gray, after William Wordsworth's ballad. In helping her to victory, he sees a chance at social redemption and a coveted scholarship to the university.

Inevitably, he falls for her. But the love story is tinged with self-interest from the start. At first, saving her means helping himself, but eventually, he has to choose between her and his glorious political future.

One of Collins' persistent questions in the first three books is: To what extent is character warped and corrupted by circumstances? Is anyone, to quote Corionalus' Shakespearean namesake, really "author of himself"? Characters throughout the series find themselves altered by drugs ("morphling" is the opiate of choice) and poison (tracker jacker wasp venom, which drives humans insane with fear and bloodlust), along with the more quotidian influences of poverty, deprivation and war. No one comes out of the games with clean hands. It's just about, as one of the contestants says, keeping as much of yourself intact as you can.

The question of how much of character is innate, how much formed, becomes a more explicit — OK, painfully obvious — theme in The Ballad of Songbirds and Snakes. The novel is a plinth for two opposing worldviews. The cruel Hobbesian Gamemaster tells Coriolanus that the hunger games are a reminder that people are monsters kept only in check by strong rule: "What happened in the arena? That's humanity undressed. ... That's mankind in its natural state." Meanwhile, in spite of the cruelty she suffers in the arena, Lucy Gray believes that there is "a natural goodness built into human beings." The debate matters, the Gamemaster says, "[b]ecause who we are determines the type of governing we need" — a republic or a tyranny.

Readers who loved the moral ambiguity, crisp writing and ruthless pacing of the first three books might be less interested in an overworked parable about the value of Enlightenment thinking. That's not to say Collins can't or shouldn't work serious moral and political questions into her novels: It's the sheer obviousness that drags, the way that we know what the right answer is supposed to be.

Coriolanus is just a flat, wily sociopath. In contrast, Katniss was allowed contradictions: She was a wounded, vicious, plotting, independent, ferocious rebel — willing, at various points, to murder, steal and betray her loved ones for a larger goal. As a protagonist, there was something gloriously undidactic about her. She was a monster, she was a killer, and she was also a principled and intractable author of herself.

So, are we selfish animals or rational beings, capable of altruism and self-governance? The Ballad of Songbirds and Snakes tells us what we should think. But The Hunger Games allowed for both.