Accessibility links
U.S. Authorities Say Hobby Lobby's Gilgamesh Tablet Is 'Stolen,' Must Go Back To Iraq U.S. federal prosecutors are seeking the return of the Gilgamesh Dream Tablet, purchased by Hobby Lobby for display in the Museum of the Bible, which authorities say cooperated with the investigation. 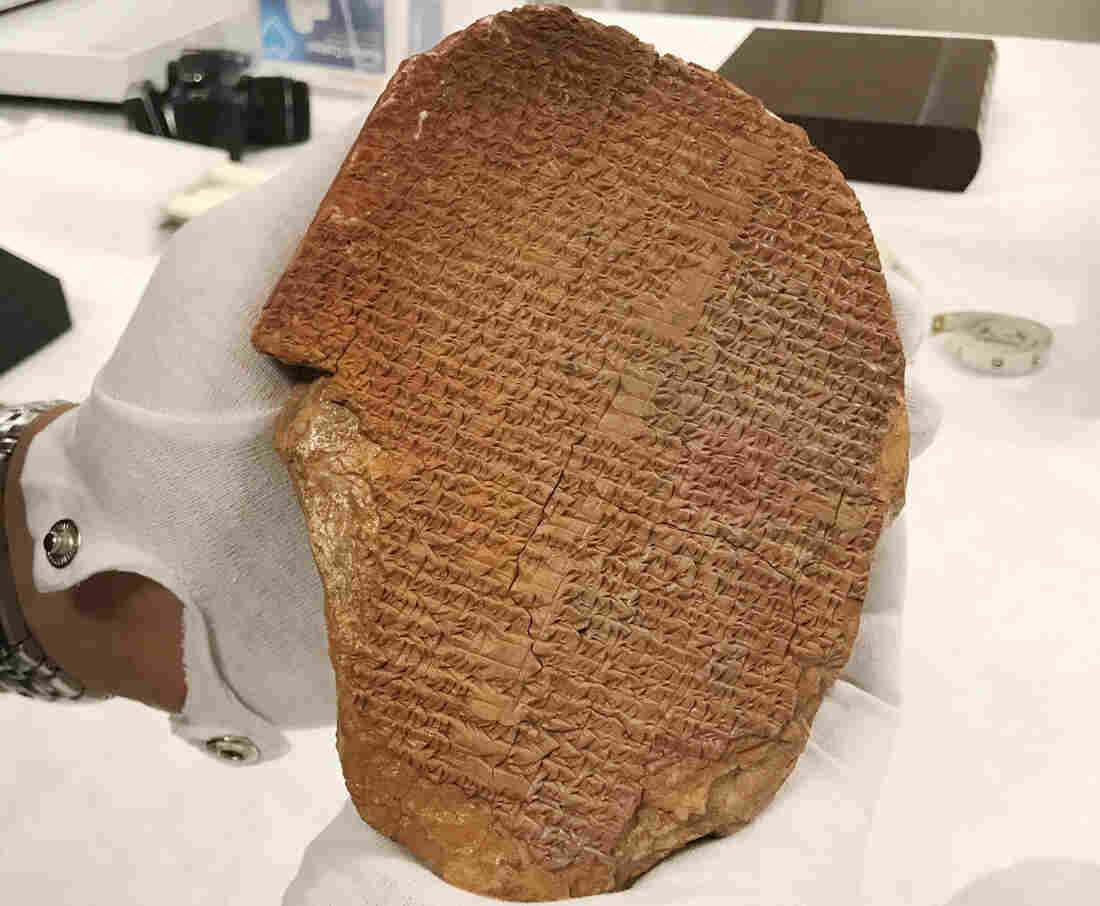 Hobby Lobby bought the Gilgamesh Dream Tablet for more than $1.6 million in 2014. "This rare tablet was pillaged from Iraq and years later sold at a major auction house, with a questionable and unsupported provenance," Peter C. Fitzhugh, special agent in charge for Homeland Security Investigations in New York, said in a statement. Immigration and Customs Enforcement hide caption 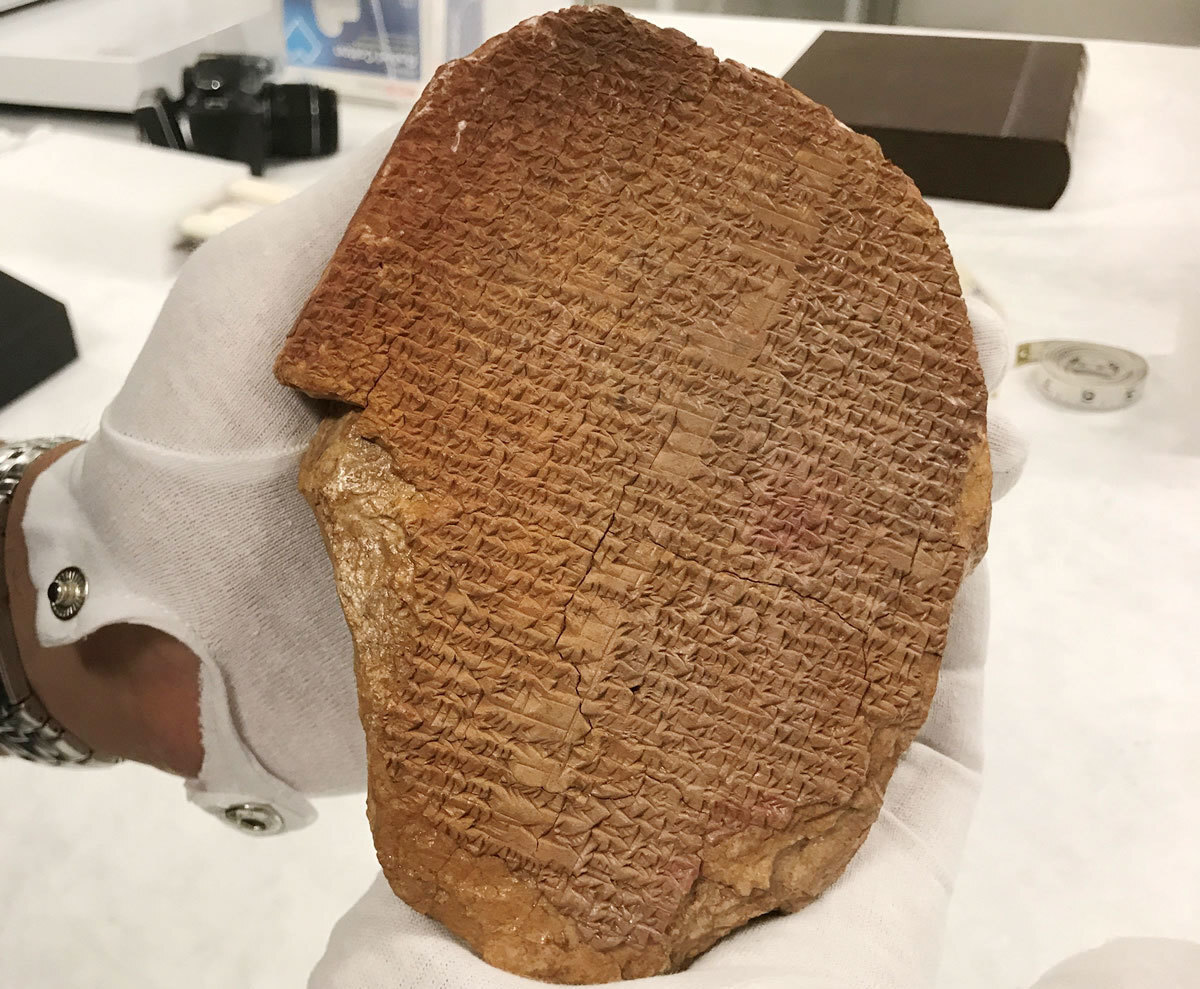 Hobby Lobby bought the Gilgamesh Dream Tablet for more than $1.6 million in 2014. "This rare tablet was pillaged from Iraq and years later sold at a major auction house, with a questionable and unsupported provenance," Peter C. Fitzhugh, special agent in charge for Homeland Security Investigations in New York, said in a statement.

U.S. federal prosecutors are seeking the return to Iraq of a roughly 3,500-year-old clay tablet purchased by the Hobby Lobby arts and crafts store chain for display in the Washington, D.C.-based Museum of the Bible. The cuneiform tablet is described as "stolen Iraqi property" in a civil complaint filed Monday.

The complaint details part of the journey of this fragment of the oldest known creation tale — from a palace library in ancient Mesopotamia to its present location in a Department of Homeland Security warehouse in Queens, New York.

It alleges that a major international auction house, unnamed in the complaint, obscured the provenance of the tablet, known as the Gilgamesh Dream Tablet, when it sold the tablet to Hobby Lobby in 2014.

The prosecutors said the 5-by-6-inch tablet, which Hobby Lobby purchased for more than $1.6 million, is considered the property of the Iraqi government and should be returned.

"Whenever looted cultural property is found in this country, the United States government will do all it can to preserve heritage by returning such artifacts where they belong," Richard Donoghue, U.S. attorney for the Eastern District of New York, said in a statement. "In this case, a major auction house failed to meet its obligations by minimizing its concerns that the provenance of an important Iraqi artifact was fabricated, and withheld from the buyer information that undermined the provenance's reliability."

The Gilgamesh epic is a Sumerian poem believed to have been written at least 4,000 years ago. Sections of it mirror details of the Great Flood and the Garden of Eden stories from the Old Testament, which it predates. A 12-tablet version of the poem, written in the Akkadian language, was discovered in the ruins of the library in a palace of Nineveh in present-day Mosul, Iraq.

The Gilgamesh Dream Tablet recounts the hero describing his dreams to his mother, who says they predict the arrival of a new friend. "You will see him and your heart will laugh," she tells him.

According to the complaint, the tablet surfaced in or before 2001, when an unnamed U.S. antiquities dealer examined it, laid out with other pieces on the floor of the London apartment of a Jordanian antiquities dealer known to acquire directly from the Middle East. Two years later, the U.S. dealer returned with a cuneiform expert, who determined that, despite the salt encrustations that made it difficult to read, the tablet was likely a piece of ancient literature — "potentially rare and valuable" — rather than a more common commercial and legal document.

The U.S. dealer bought several pieces, including the Gilgamesh tablet, for $50,350.

It resurfaced in 2007, when it was sold to two other buyers, one of whom included it in a sales catalog, claiming the tablet had been with a single U.S. owner for the previous 25 years. The asking price in the catalog was $450,000. It came with a false letter of provenance, claiming it had been acquired at a 1981 San Francisco auction in a box of bronze fragments, according to the U.S. complaint.

In 2013, the complaint says, a new owner of the tablet contacted the London office of the international auction house, wanting to sell it. But the U.S. antiquities dealer told the auction house's antiquities department head that the object's provenance would not stand up to scrutiny and it would not be suitable for public auction.

Hobby Lobby was fined $3 million in 2017 for failing to conduct due diligence after federal authorities said it bought thousands of artifacts that had been smuggled out of Iraq. Some of the items on display at the Museum of the Bible had been looted from previously unknown archaeological sites.

In a statement in March, museum board chairman Steve Green said the institution had identified a further 5,000 papyrus fragments and 6,500 clay objects with insufficient provenance that would be returned to Egypt and Iraq.

In the 2017 settlement with federal authorities, Green committed to the museum exercising more oversight. Later that same year, the Museum of the Bible contacted the auction house to verify information about the origins of the Gilgamesh tablet. U.S. prosecutors say the auction house withheld information.

Iraq's ministry of antiquities told NPR that it is trying to determine whether the Gilgamesh tablet was among thousands of items stolen from one of its regional museums in 1991. After Saddam Hussein's invasion of Kuwait the previous year, the regime lost control of certain parts of Iraq. At least nine of the country's 13 regional museums were looted in the turmoil.

An earlier version of this story mistakenly said Saddam Hussein invaded Kuwait in 1991; the invasion was in 1990.