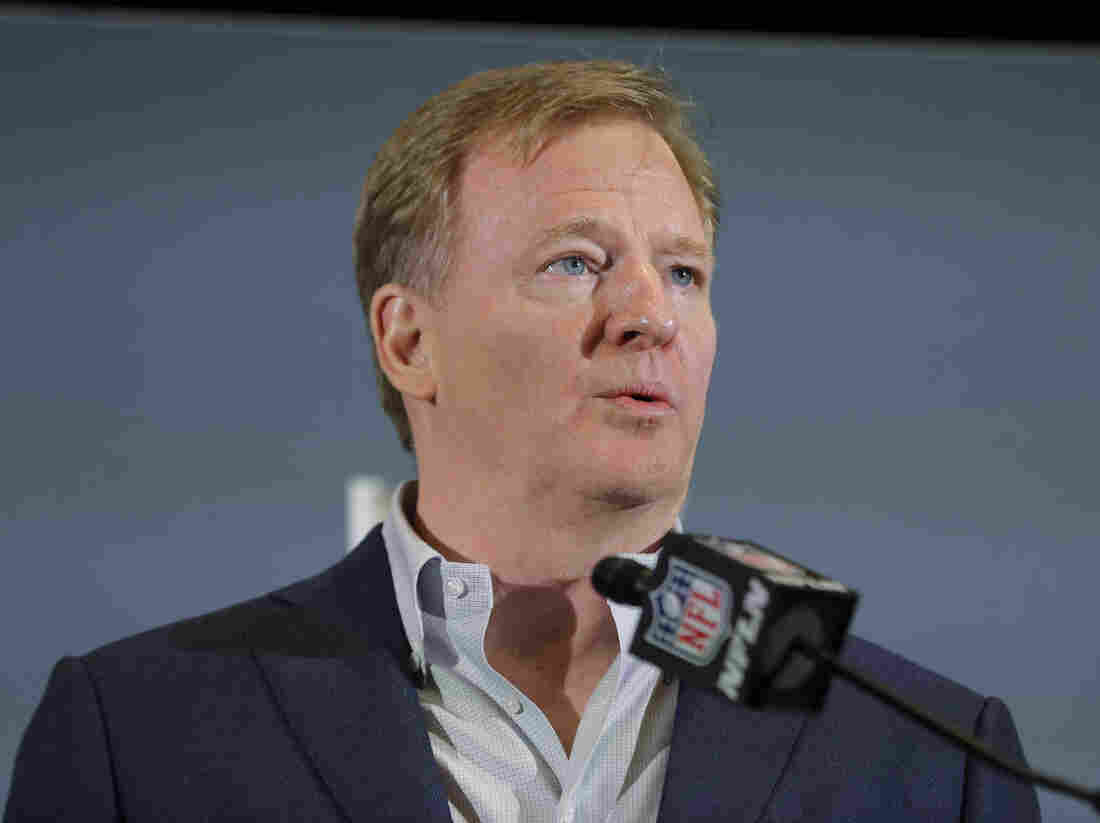 The NFL has set protocols for reopening team facilities, a process that begins as early as Tuesday. NFL Commissioner Roger Goodell is shown here speaking in Miami in February. Brynn Anderson/AP hide caption 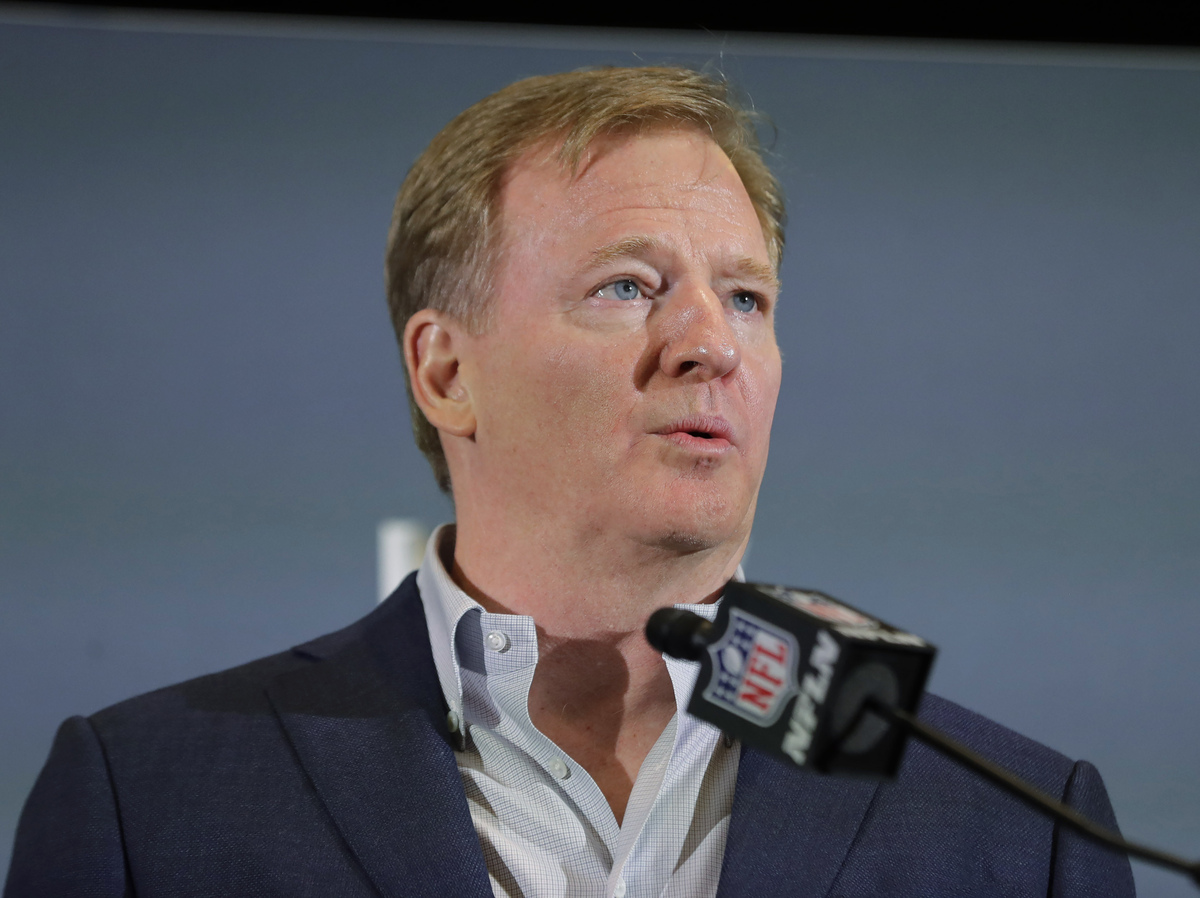 The NFL has set protocols for reopening team facilities, a process that begins as early as Tuesday. NFL Commissioner Roger Goodell is shown here speaking in Miami in February.

The NFL announced an expansion of its rules guiding how clubs consider minority candidates for top coaching positions and front office jobs Tuesday, describing the changes as "wide-sweeping workplace reforms."

This comes the same day that the NFL is allowing teams to reopen their practice facilities, so long as certain health regulations are met and they're allowed to do so in their areas. League facilities have been shuttered for nearly two months out of concerns over the coronavirus.

NFL clubs agreed to modifications to what is known as the Rooney Rule, which has been in place since 2003 and requires teams with head coaching vacancies to interview at least one minority candidate.

Now all 32 NFL teams will be mandated to interview at least two external minority candidates for head coaching jobs.

"While we have seen positive strides in our coaching ranks over the years aided by the Rooney Rule, we recognize, after the last two seasons, that we can and must do more," NFL Commissioner Roger Goodell said in a statement.

As NFL columnist Jim Trotter points out, just three of the last 20 head coaching vacancies in the NFL have gone to a person of color.

The new rules will also apply to women and minorities for other roles within franchises and at the league office, including senior jobs in communications, sales and legal departments.

NFL.com reports that league owners tabled a proposal that would have given teams "enhanced draft stock for hiring minority candidates as head coaches or primary football executives."

As far as returning to the field, Tuesday marks an important first step.

While the league's first phase of reopening bars the vast majority of players and coaches from entering team buildings, the NFL previously said teams can open their facilities if state and local regulations allow them to do so and franchises are in compliance with any additional public health requirements. This was detailed in a league memo dated May 15 and tweeted out by NFL Network's Ian Rapoport.

Additionally, teams must follow protocols outlined by Dr. Allen Sills, the league's Chief Medical Officer, which includes a positions called "Infection Control Officers." Any club seeking to reopen Tuesday had to have "its ICO complete this training program" as of Monday evening.

If teams are unable to reopen Tuesday, the league said they can do so "on the earliest date thereafter on which they are able to meet the criteria."

Two NFL franchises confirmed to NPR they were not yet in a position to begin reopening. The New York Jets and the New York Giants have practice facilities in Florham Park and East Rutherford, N.J., respectively.

"Governor Murphy and his administration have guided us all through this very difficult time, and there continue to be regulations in place to protect us and our fellow citizens. When we have clearance to re-open our facility, we will do so in a systematic and safe way that adheres to the state's guidelines and NFL protocol," the Giants said in a statement to NPR.

There are reports that as many as eight other teams will not start reopening Tuesday. This includes the Minnesota Vikings, the Star Tribune reports.

The NFL memo says that in the first phase of reopening mandates, no clubs can have more than 50% of facility staff present, capping the number of personnel at 75 people at all team locations.

The only players that are allowed to be at the facility are those "undergoing medical treatment or rehabilitation."

And in an effort to maintain equity among all 32 teams and not allow those that can reopen gain a competitive advantage, the league said no members of the coaching staff can be at the facility, unless a strength and conditioning coach is "currently participating in player rehabilitation."

The reopening, though limited, "is an important step in demonstrating our ability to operate ... effectively, even in the current environment," the league memo stated.

The NFL has been hopeful about resuming some sort of normal operating schedule. The season is scheduled to kick off in September.

The league held the first "fully virtual" NFL draft in April with Goodell, the NFL's commissioner, hosting from his basement.

All club facilities have been shuttered since late March out of concern about to the spread of COVID-19. Still, the league has not been spared from the coronavirus.