Accessibility links
With No Citizenship Question, Trump Officials Turn To Records After failing to get the now-blocked citizenship question onto 2020 census forms, the Trump administration is turning to IRS tax forms, Medicaid data and Interior Department law enforcement records. 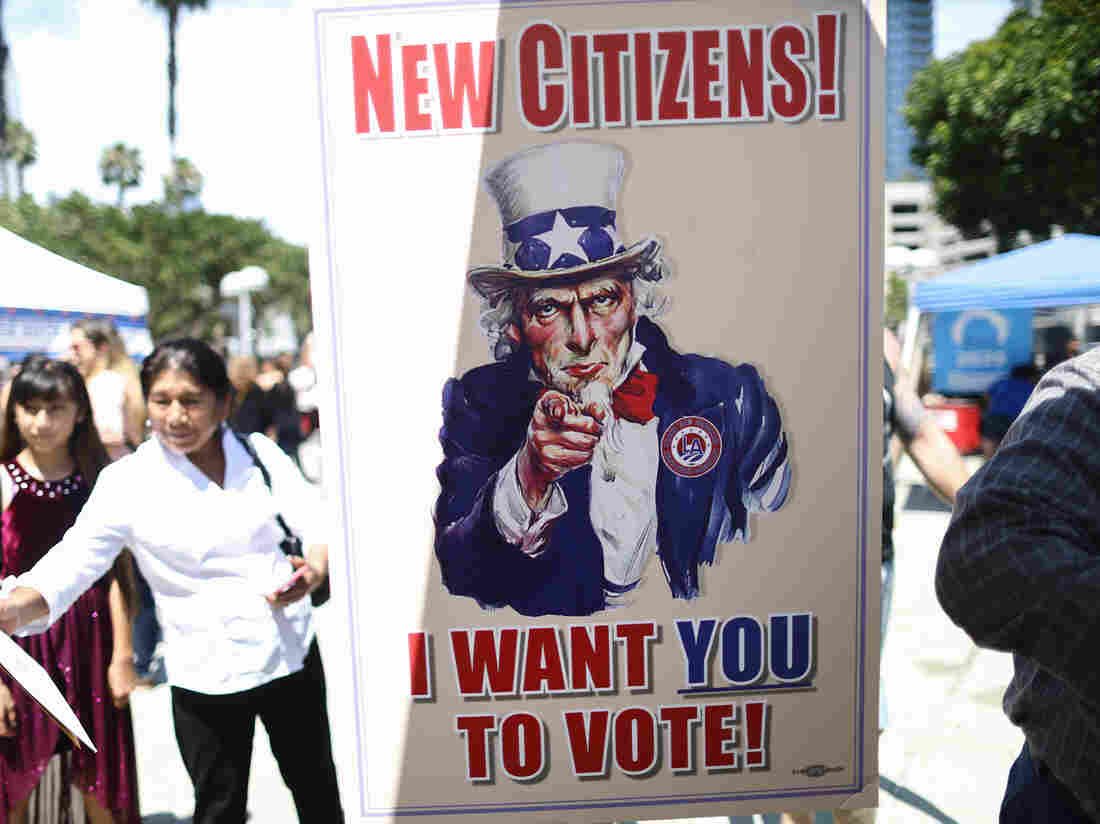 A sign encourages newly sworn-in U.S. citizens to register to vote outside a naturalization ceremony in 2019 in Los Angeles. After failing to get the now-blocked citizenship question on the 2020 census, the Trump administration is continuing to gather government records to produce citizenship data for redistricting. Mario Tama/Getty Images hide caption 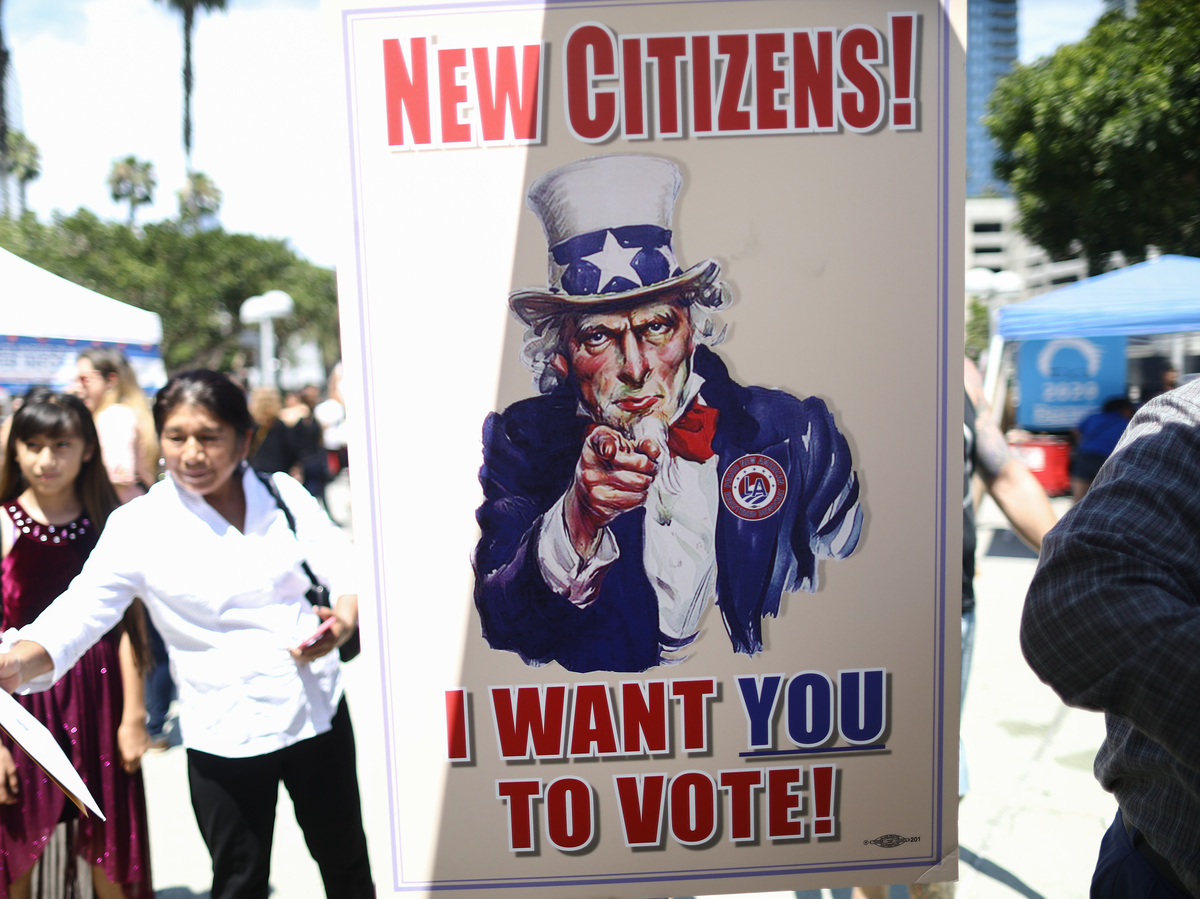 A sign encourages newly sworn-in U.S. citizens to register to vote outside a naturalization ceremony in 2019 in Los Angeles. After failing to get the now-blocked citizenship question on the 2020 census, the Trump administration is continuing to gather government records to produce citizenship data for redistricting.

You will not find a citizenship question on the 2020 census forms.

But in the months since federal courts permanently blocked the Trump administration from asking the hotly contested question for this year's national head count, the administration has been pushing ahead with a backup plan — amassing government records to try to determine the U.S. citizenship status of every adult living in the country.

Information from the U.S. Army, federal prisons and the Department of the Interior's law enforcement system are among the newly disclosed batch of records the Census Bureau says it is using to comply with President Trump's executive order for citizenship data, according to a memo the bureau quietly posted on its website this month.

Previously released government documents have confirmed that the bureau is also compiling IRS tax forms and data from Medicare and Medicaid, as well as records from the Department of Homeland Security, Social Security Administration and State Department. The bureau has also asked states to share their driver's license records, and in November, Nebraska's Department of Motor Vehicles signed an agreement to turn over monthly data about license and ID card holders' citizenship status, names, addresses, dates of birth, sex, race and eye color.

Put together, these records could be used to yield data that could radically change political mapmaking and shift the balance of political power across the United States over the next decade.

Instead of drawing voting districts based on the number of overall residents in an area, the citizenship data the Trump administration wants created — detailed down to the level of a census block — may allow mapmakers to redistrict using the number of citizens old enough to vote. A GOP strategist concluded that excluding U.S. citizens under the age of 18 and noncitizens, both those lawfully and unlawfully in the country, from the numbers used to remake political maps would be "advantageous to Republicans & Non-Hispanic Whites."

That method of redistricting was one of the main uses of the data outlined in Trump's executive order, which also noted that the information could help the government "generate a more reliable count of the unauthorized alien population in the country."

Last year, U.S. Attorney General William Barr announced in the White House Rose Garden that the citizenship data "may be relevant" in an ongoing federal lawsuit the state of Alabama and Rep. Mo Brooks, a Republican from that state, has filed against the Census Bureau to get unauthorized immigrants excluded from the 2020 census numbers used to redistribute congressional seats and Electoral College votes among the states.

But the Census Bureau is not planning to release estimates of noncitizens living in the U.S. or a breakdown between unauthorized immigrants and green card holders, according to a technical document on its webpage about the citizenship data. Instead, the document says the bureau is working on data tables that show estimates of the voting-age citizen population, as well as groupings by race and ethnicity.

The coronavirus outbreak and the changes it has forced upon the bureau's 2020 census plans have interrupted the agency's work on the citizenship data. Last month, the bureau said in a regulatory document that it plans to announce its final plans for citizenship data by Oct. 31.

The pandemic-related delays have led the bureau to ask Congress to push back by four months the legal deadlines for delivering the results of the 2020 census, including redistricting data the bureau now would like to provide to the states by the end of July 2021.

If a new law is passed that allows for that extension, the bureau is also expecting to release the citizenship data as ordered by Trump by July 31, 2021, James Whitehorne, the head of the Census Bureau's redistricting and voting rights data office, told redistricting officials last month during a webinar organized by the National Conference of State Legislatures.

The House Democrats' new coronavirus relief bill does allow for a deadline extension for redistricting data from the 2020 census. But the bill — which is not expected to get support from the Republican-controlled Senate — also includes a provision that would stop the efforts to create the citizenship data requested by the Trump administration.

Asked how the more recently disclosed sources of records are helping the Census Bureau's researchers develop citizenship data, the bureau's public information office directed NPR to slides the agency's officials presented last year that said they help researchers link records about the same individual and determine whether that person is a U.S. citizen.

The Census Bureau is obtaining these records through sharing agreements negotiated with the other agencies, and the bureau has said the records are "stripped of any personal identifiable information and are used for statistical purposes only."

"They cannot be shared in identifiable form with any other government agency or the public," the bureau emphasized in its technical document about citizenship data.

Still, Latinx community groups in Arizona and Texas represented by the Mexican American Legal Defense and Educational Fund and Asian Americans Advancing Justice are trying to stop the release of the citizenship data with a federal lawsuit against the administration. The challengers contend that the production of the data is part of a conspiracy to prevent Latinos, noncitizens and other immigrants from receiving fair political representation.

In response to the Census Bureau's announcement last month about delaying its field operations for the 2020 census, Thomas Saenz, MALDEF's president and general counsel, called continued work on citizenship data a "dangerous diversion from the necessity of concentrating on Census 2020 in the Bureau and from accomplishing pandemic recovery efforts in other federal and state agencies."

"The sources for CVAP are mostly new to the Census Bureau, requiring more effort to understand the files and how to appropriately link it with other data," O'Hara, who is now a research professor at Georgetown University's Massive Data Institute, says in an email. "This competes with staff time for planned uses of administrative data, and with emerging needs during the pandemic, like correctly counting college students."

Still, the citizenship data could be useful to at least one state.

Missouri state lawmakers approved a resolution last week that includes a ballot initiative that would require the state's House and Senate districts to be drawn "on the basis of one person, one vote."

Critics of the proposed constitutional amendment worry that it could lead to redistricting based on the number of citizens old enough to vote rather than of all residents, including children.

"The Supreme Court held in 2016 that it is constitutional to draw districts on the basis of total population, so that every district has the same number of people," Michael Li, a redistricting expert who is a senior counsel for the Brennan Center for Justice's Democracy Program, explains in an email. "But the court left open the question of whether it might also be constitutional to use another population basis, such as eligible voters. That open question could be one of the big fights of this decade."